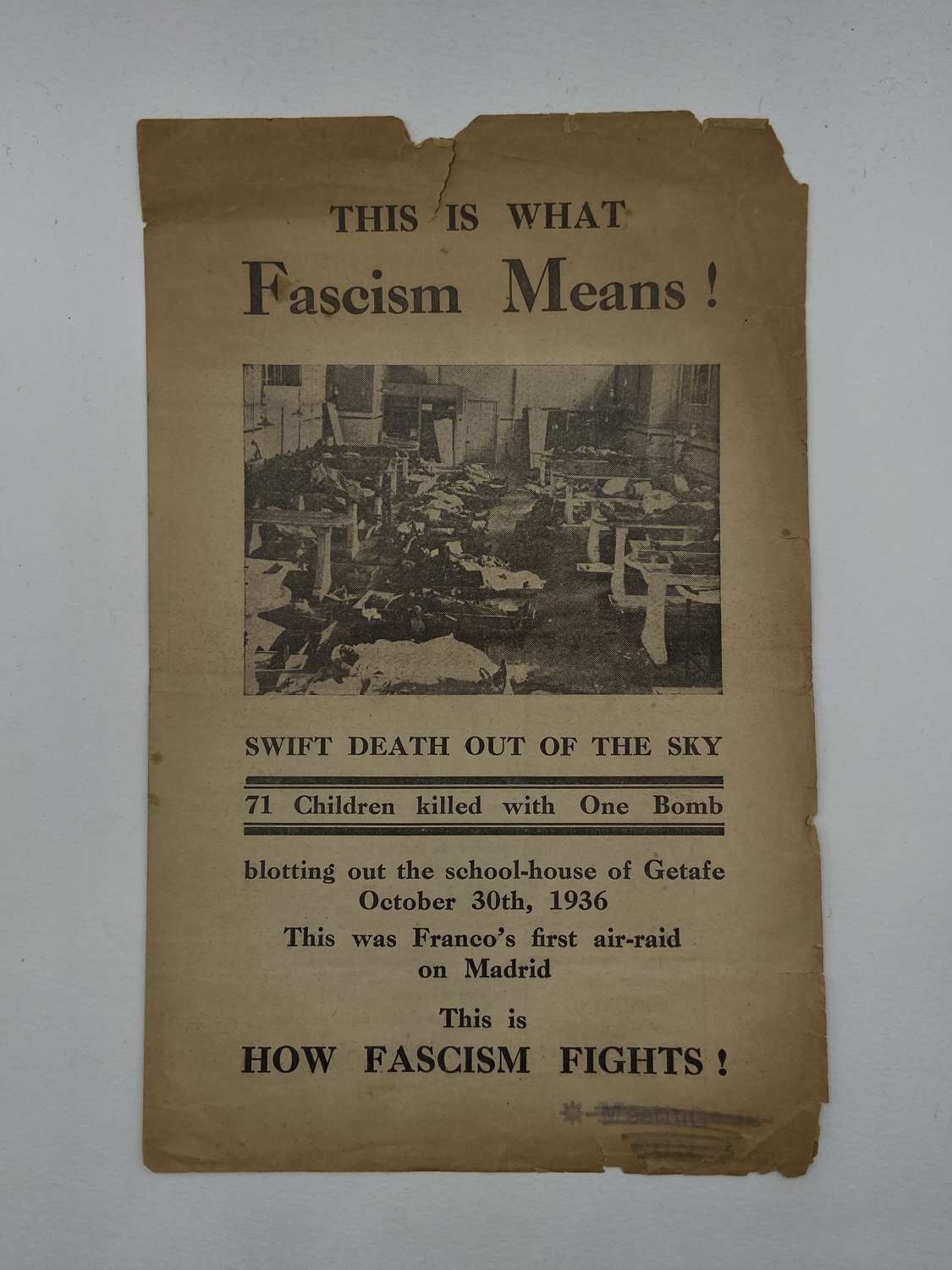 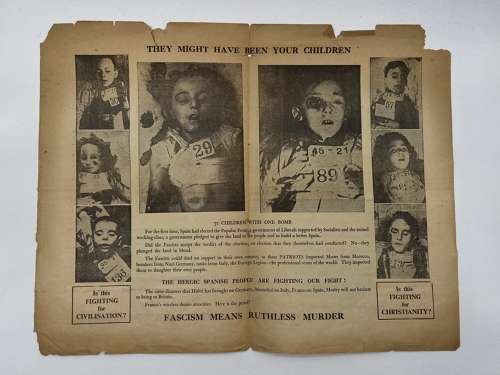 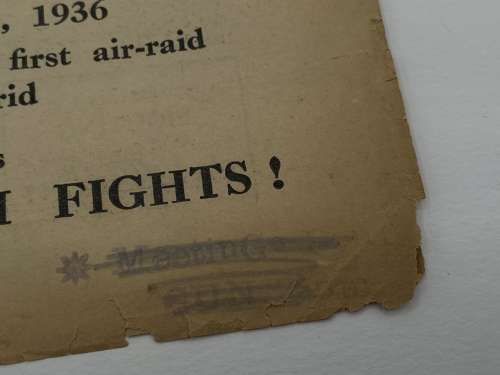 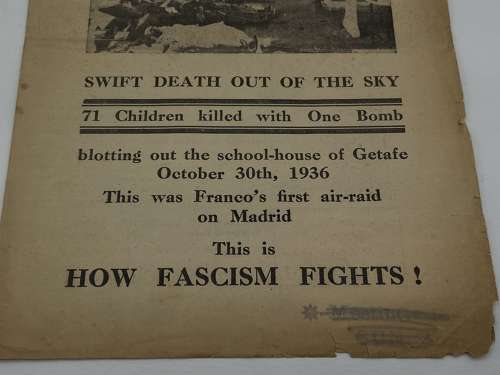 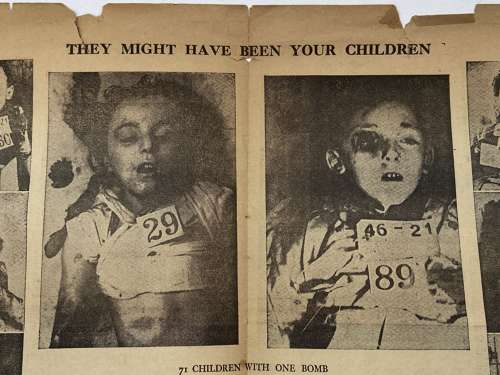 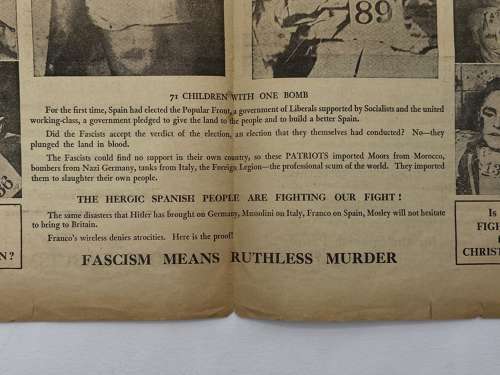 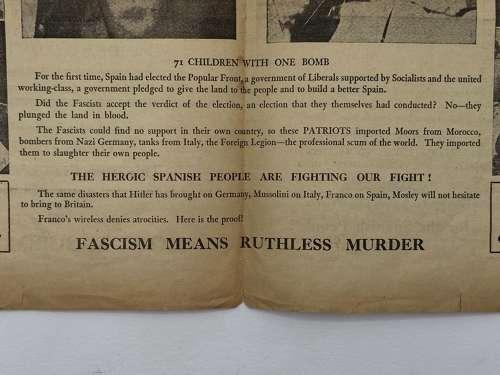 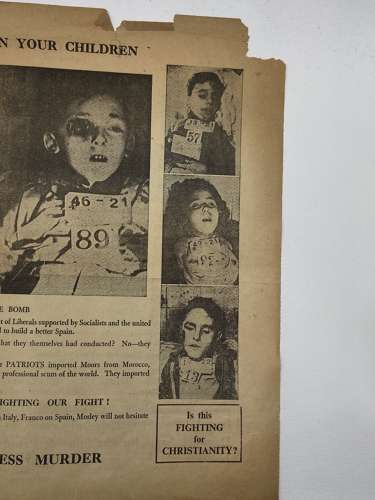 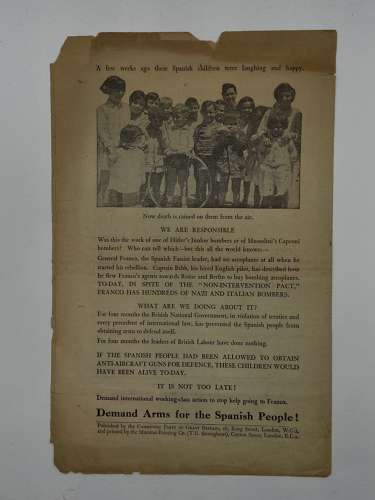 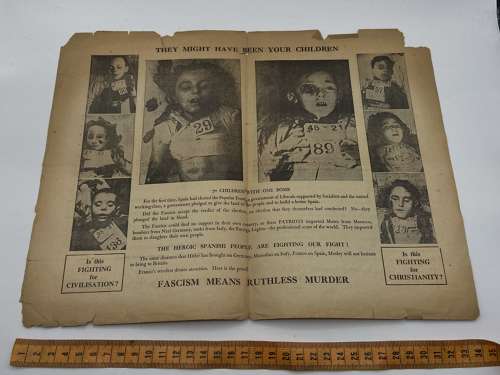 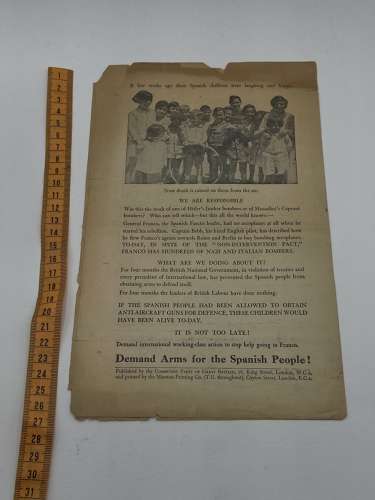 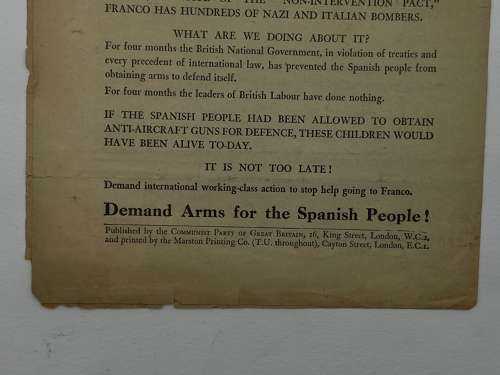 For sale is a Exceptionally Rare 1936 Dated, British communist party anti-propaganda double sided large leaflet poster that points out THIS IS WHAT FASCISM MEANS! With links to the Spanish civil war, a school bombing, graphic images of children’s bodies and warnings against fascism and supporting Mosley and the British Union of fascists. This is a very interesting part of history, and one of the only leaflets we’ve seen of this kind. The bottom right of the front cover is marked “meeting Sunday” in a faded ink.

This exceptionally rare piece reads as the following:

THIS IS WHAT Fascism Means ! SWIFT DEATH OUT OF THE SKY, 71 Children killed with One Bomb blotting out the school-house of Getafe October 30th, 1936. This was Franco's first air-raid on Madrid. This is HOW FASCISM FIGHTS!

71 CHILDREN WITH ONE BOMB. For the first time, Spain had elected the Popular Front, a government of Liberals supported by Socialists and the united working-class, a government pledged to give the land to the people and to build a better Spain. Did the Fascists accept the verdict of the election, an election that they themselves had conducted? No-they plunged the land in blood.

The Fascists could find no support in their own country, so these PATRIOTS imported Moors from Morocco, bombers from Nazi Germany, tanks from Italy, the Foreign Legion-the professional scum of the world. They imported them to slaughter their own people.

THE HEROIC SPANISH PEOPLE ARE FIGHTING OUR FIGHT!

The same disasters that Hitler has brought on Germany, Mussolini on Italy, Franco on Spain, Mosley will not hesitate to bring to Britain. Franco's wireless denies atrocities. Here is the proof FASCISM MEANS RUTHLESS MURDER.

Is this fighting for civilisation?

Is this fighting for Christianity?

A few weeks ago these Spanish children were laughing and happy.

Now death is rained on them from the air.

Was this the work of one of Hitler's Junker bombers or of Mussolini's Caproni bombers? Who can tell which-but this all the world knows: General Franco, the Spanish Fascist leader, had no aeroplanes at all when he started his rebellion. Captain Bebb, his hired English pilot, has described how he flew Franco's agents towards Rome and Berlin to buy bombing aeroplanes. TO-DAY, IN SPITE OF THE "NON-INTERVENTION PACT," FRANCO HAS HUNDREDS OF NAZI AND ITALIAN BOMBERS.

WHAT ARE WE DOING ABOUT IT? For four months the British National Government, in violation of treaties and every precedent of international law, has prevented the Spanish people from obtaining arms to defend itself. For four months the leaders of British Labour have done nothing.

IF THE SPANISH PEOPLE HAD BEEN ALLOWED TO OBTAIN ANTI-AIRCRAFT GUNS FOR DEFENCE, THESE CHILDREN WOULD HAVE BEEN ALIVE TO-DAY.

IT IS NOT TOO LATE!

This will be sent via special delivery, insured and dispatched within two working days.