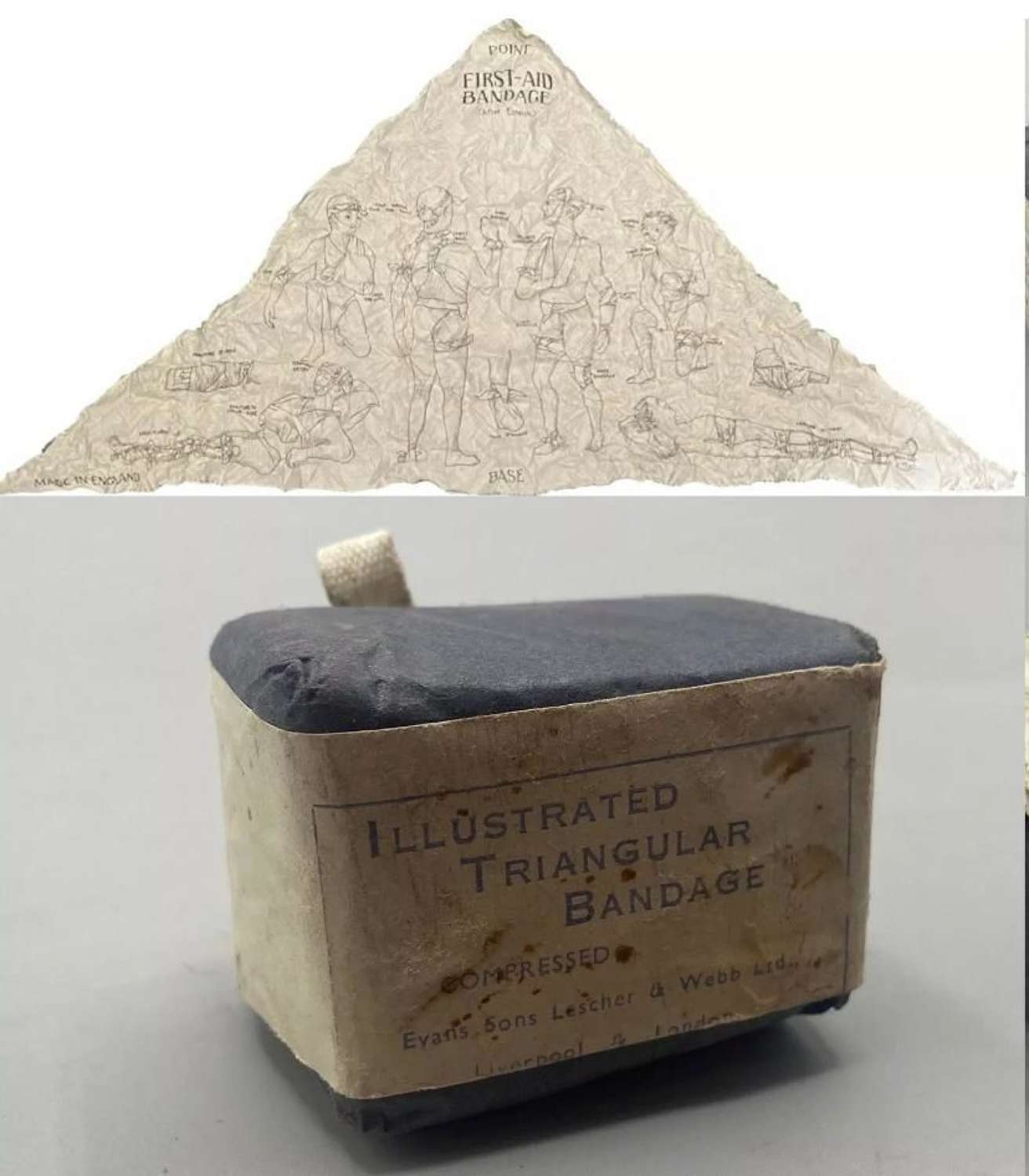 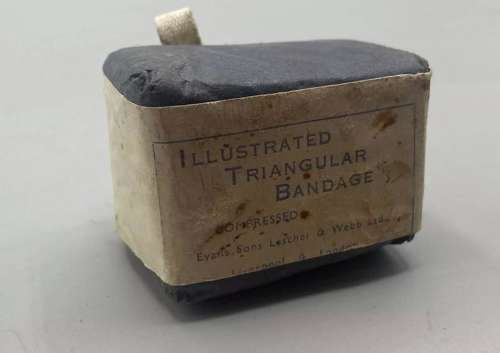 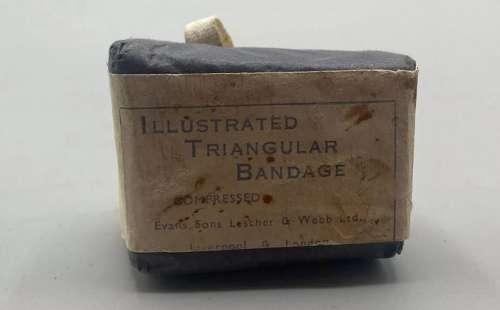 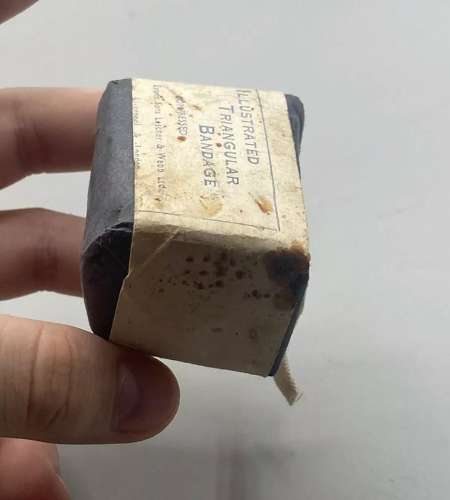 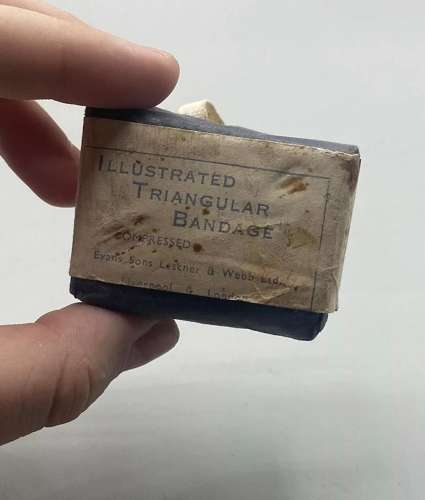 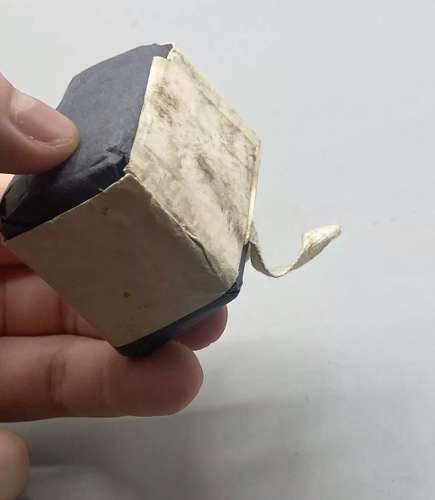 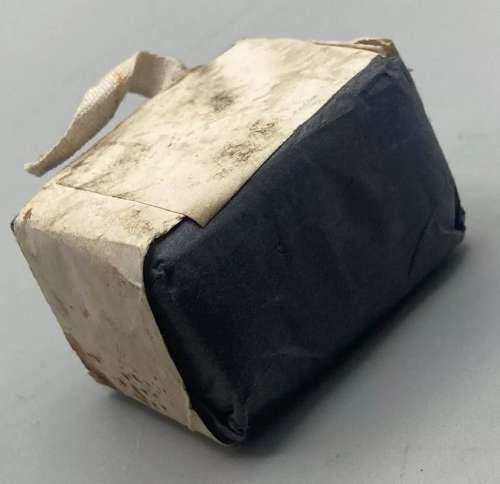 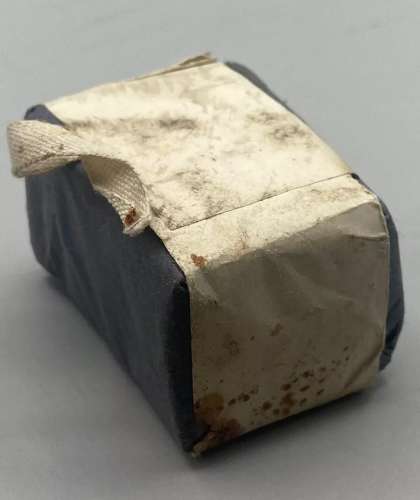 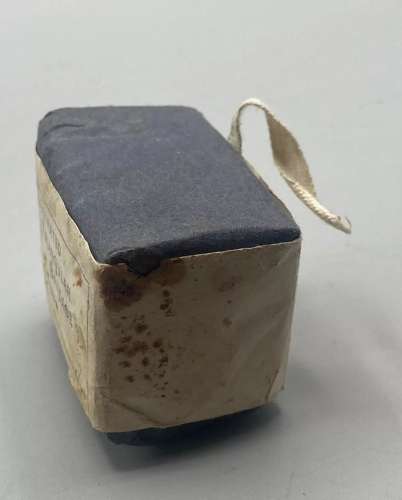 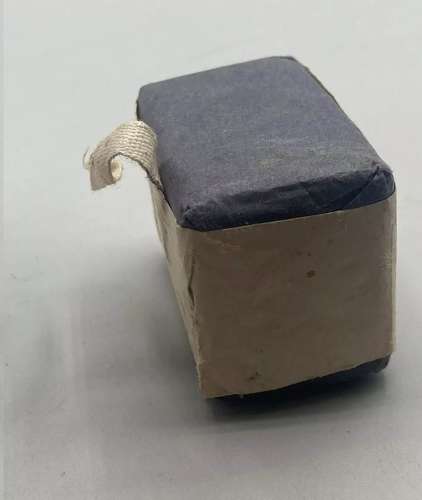 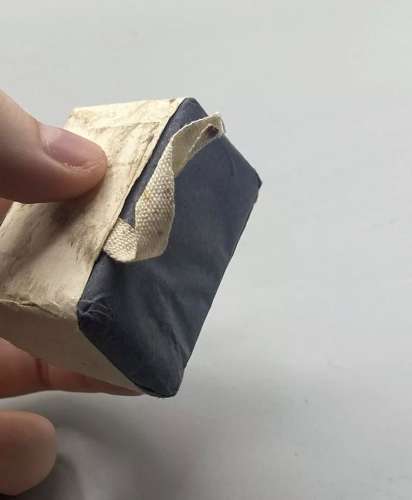 £100.00 Approx $120.77, €118.2, £100
(1 in stock)
Qty
For sale is an exceptionally rare Boer War To WW1 British Army Esmarch compressed illustrated Triangular Bandage Unopened and in its original paper & card packaging. The first and second photograph is what the illustrated triangular bandage looks like when unpacked and opened out! You don’t get much more pristine condition than this. The paper white label that goes around the dark blue paper packing, reads the following:
“ILLUSTRATED TRIANGULAR BANDAGE COMPRESSED Evans sons Lescher & Webb LTD , Liverpool London”
These triangular bandages were produced to help guide/ instruct the user of The triangular bandage (this could have been a medic, military personal, home front personal, medical student etc) how it should be used. They were depicted with elaborate illustration to inform the user of its many applications. There have been several examples of these illustrated triangular bandages made throughout the 19th century some of the more commoner and later patterns produced by St. John ambulance of a way of training cadets. However this rare original un opened and perfectly preserved illustrated triangular bandage dates between 1899 and 1916 period.
The top of this triangular bandage reads “POINT FIRST-AID BANDAGE (AFTER ESMARCH).” This is significant because A bandage seems like a normal thing for one to encounter in a first aid kit. This was not always the case. The triangular bandage is attributed to Johann Friedrich August von Esmarch. Esmarch was born 1823, a German surgeon who specialized in trauma and military medicine. During the Franco-Prussian war in 1870-1871, he became the Surgeon General. War fare technology was evolving in the Franco-Prussian war, but trauma medicine was lagging. Esmarch recommended that it become mandatory for first aid kits to be carried by every soldier on the battle field. He was among the first to push for the teaching of first aid to all people, not just medical professionals. This enabled soldiers to perform triage on the battle field. Esmarch made great progress in tourniqueting and the use of a triangular bandage. Also called the Esmarch bandage, the triangular bandage is a versatile tool. It can wrap sprains, bone breaks, and be used to stop bleeding as a tourniquet. The triangular bandage is printed with instructional drawings for users to bind limbs adequately until trained medical professionals are able to attend to the injured.
I recently have come across three of these illustrated triangular bandages, all produced by the same maker, two of these bandages in pristine condition and the other with ripped packaging, so in order to best show you what you are bidding on I opened the ripped packaging one and photographed it for your eyes! You are bidding on the single unopened unused compressed illustrated triangular bandage which hasn’t seen the light of day in over 100 years.
This will be sent via special delivery via Royal Mail and dispatched within two working days.