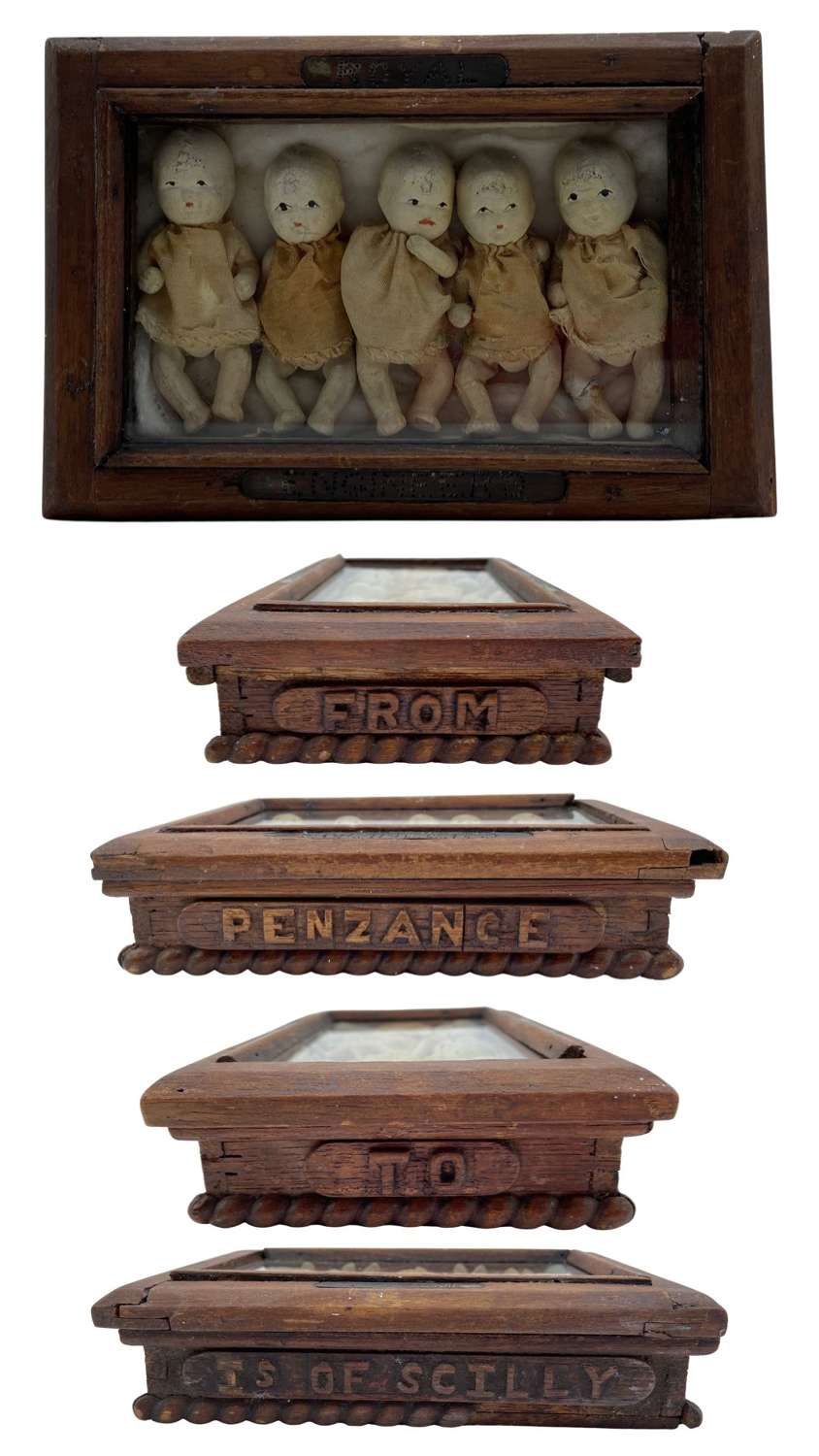 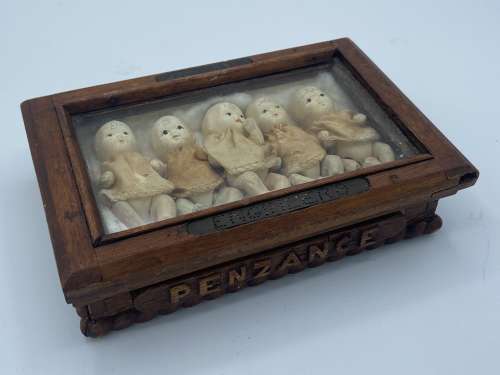 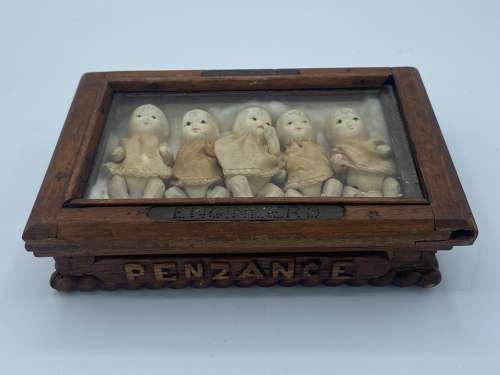 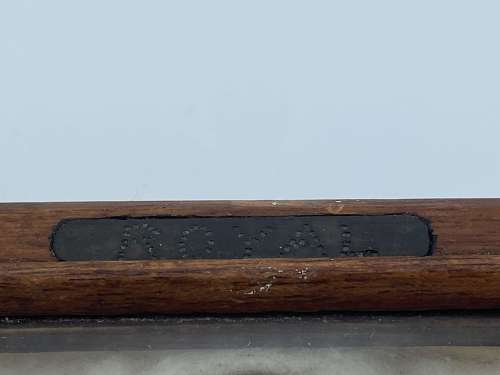 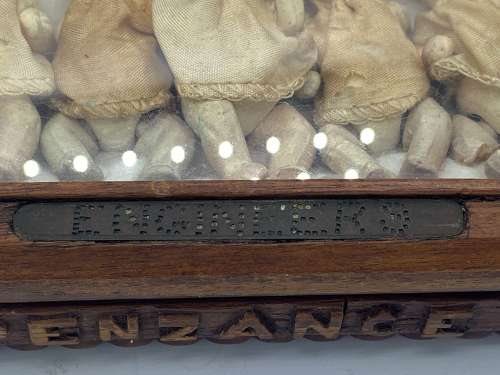 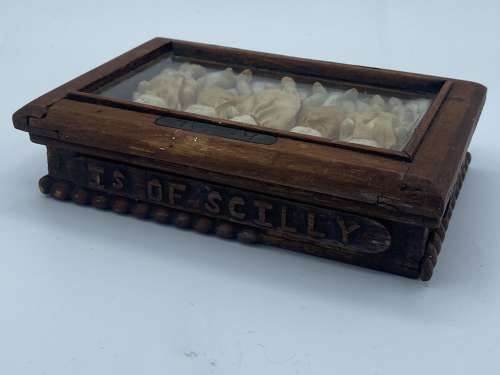 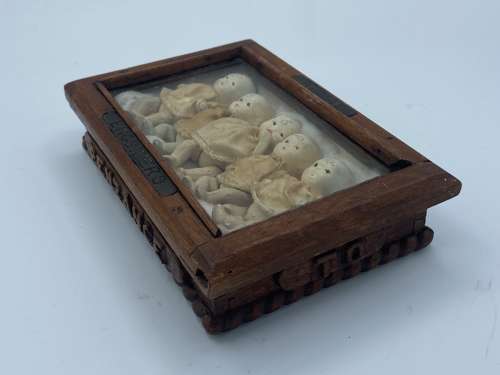 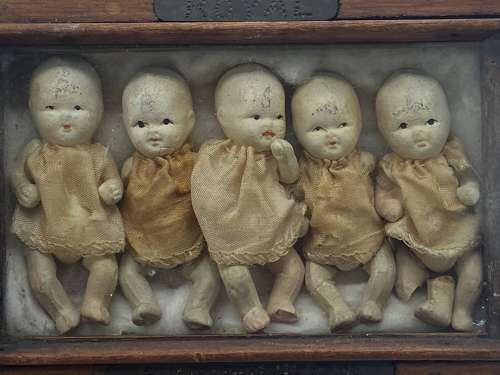 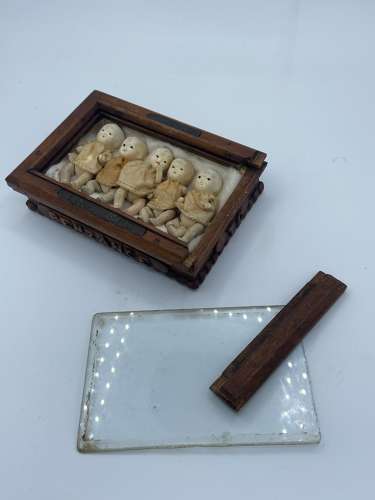 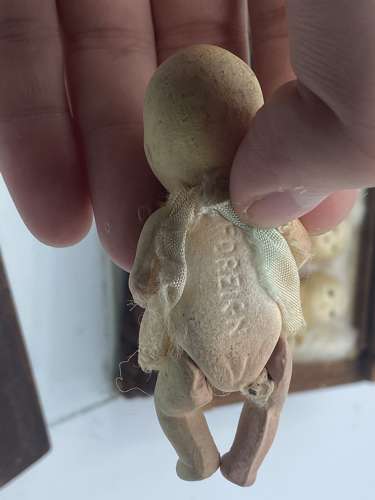 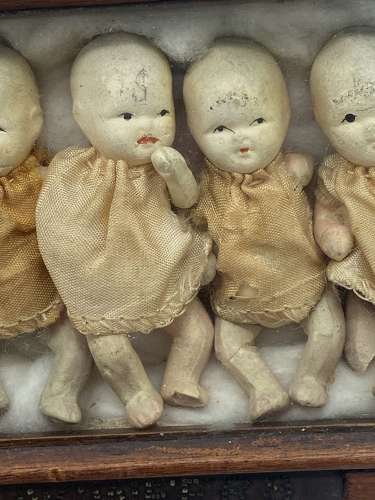 For sale is a rare World War Two oddity from the 9th Parachute Squadron Royal Engineers, carved on the outside of the box carved is “Penzance to is of scilly from” on each of the sides. On top dotted into the brassie ‘Royal Engineers 9’. Inside this beautifully carved trench art box are 5 small porcelain dolls marked ‘foreign’ on there backs with little silk night dresses on. Royal engineers 9 has a sad/ dark past. The parachutist that crafted this beautiful piece of trench art was most likely killed in operation freshwater! The carved wooden box is made carved from the wood of a glider! Please see photos for more details. There is the odd bit of damage where one of the legs have broken but is still there. Access too these dolls can be easy got to through the side as seen in one of the photos. More information below, this truly is a one of piece!

The Squadron’s history goes back to 1787, when the Chatham Company of “Royal Military Artificers” was raised at Chatham. It was re-named 9 Field Company in Gibraltar in 1806 and became part of Airborne Forces in May 1942, when 9 (Airborne) Field Company RE provided the engineer support for the newly formed 1st Airlanding Brigade, with about one-third of the Company in the parachute role and the remainder glider-borne. Their first airborne operation, OP FRESHMAN, was in Norway in 1942 where they were tasked to destroy a heavy water plant. This turned out to be a disaster, both gliders crash landing and the few survivors being executed by the Gestapo.

On 9 July 1943 the Company, as part of 1st Airlanding Brigade, assisted in the capture of the Ponte Grande bridge at Syracuse in Sicily, fighting alongside the 1st Border Regiment and 2nd South Staffordshire Regiment. The Company was honoured by the presentation of a vellum scroll by King George VI to commemorate its part in the battle.

In September 1944, 9 Field Company, under command of Major Winchester and a part of the 1st Airborne Division, took part in Operation MARKET GARDEN. It enplaned on the morning of 17 September 1944 and, except for two gliders that crashed, landed safely at Arnhem. Unfortunately, they took heavy casualties. Of the original Company of 215 All Ranks, only 57 men returned to the UK, the remainder being captured or killed.

History of operation Freshman, where our craftsman of this beautiful piece of trench art was most likely killed:

By 1942, the German nuclear weapons programme had come close to being able to develop a nuclear reactor, but in order for the reactor to function it would require a great deal of heavy water. The source of the heavy water was the Norsk Hydro plant, which had been occupied in 1940.

When the British government learned of the German nuclear developments, it was decided that a raid would be launched to destroy the plant and deny the Germans the heavy water required to develop a nuclear weapon. Several different strategies were discussed and discarded as impractical; it was decided that a small airborne force composed of sappers from the Royal Engineer units attached to 1st Airborne Division would land by glider, a short distance from the plant, demolish it with explosives and then escape over the Norwegian border into Sweden.

After an extensive training period, the airborne force took off in two aircraft–glider combinations on the night of 19 November 1942. Both the gliders and tugs were operated by aircrews attached to HQ No. 38 Wing RAF.

The tugs and gliders managed to reach the Norwegian coast, but neither was able to reach their objective. The first pair suffered from navigational difficulties and severe weather, which resulted in the tow rope snapping and the first glider crash-landing, with its Halifax tug aircraft returning to base; three airborne troops were killed outright, with the survivors captured shortly after the crash. The second pair fared even worse, with both aircraft and glider crashing into a mountain after the aircraft flew low in search of the first glider. Both members of the glider crew, P/O Norman Davies (RAAF) and P/O Herbert Fraser (RAAF), were killed outright. Driver Ernest Pendlebury died soon afterwards from injuries sustained in the crash.

Those who survived the crashes were captured by German forces and killed as a result of A H’s Commando Order, which stated that any Allied personnel captured while involved in commando operations were to be executed immediately. At the end of the war Wehrmacht personnel were tried and condemned to death for their part in the executions.

This truly is a beautiful and unusual piece of trench art with a truely amazing piece of history. Guaranteed original or money back guaranteed. This will be sent special delivery and dispatched within two to three working day’s.