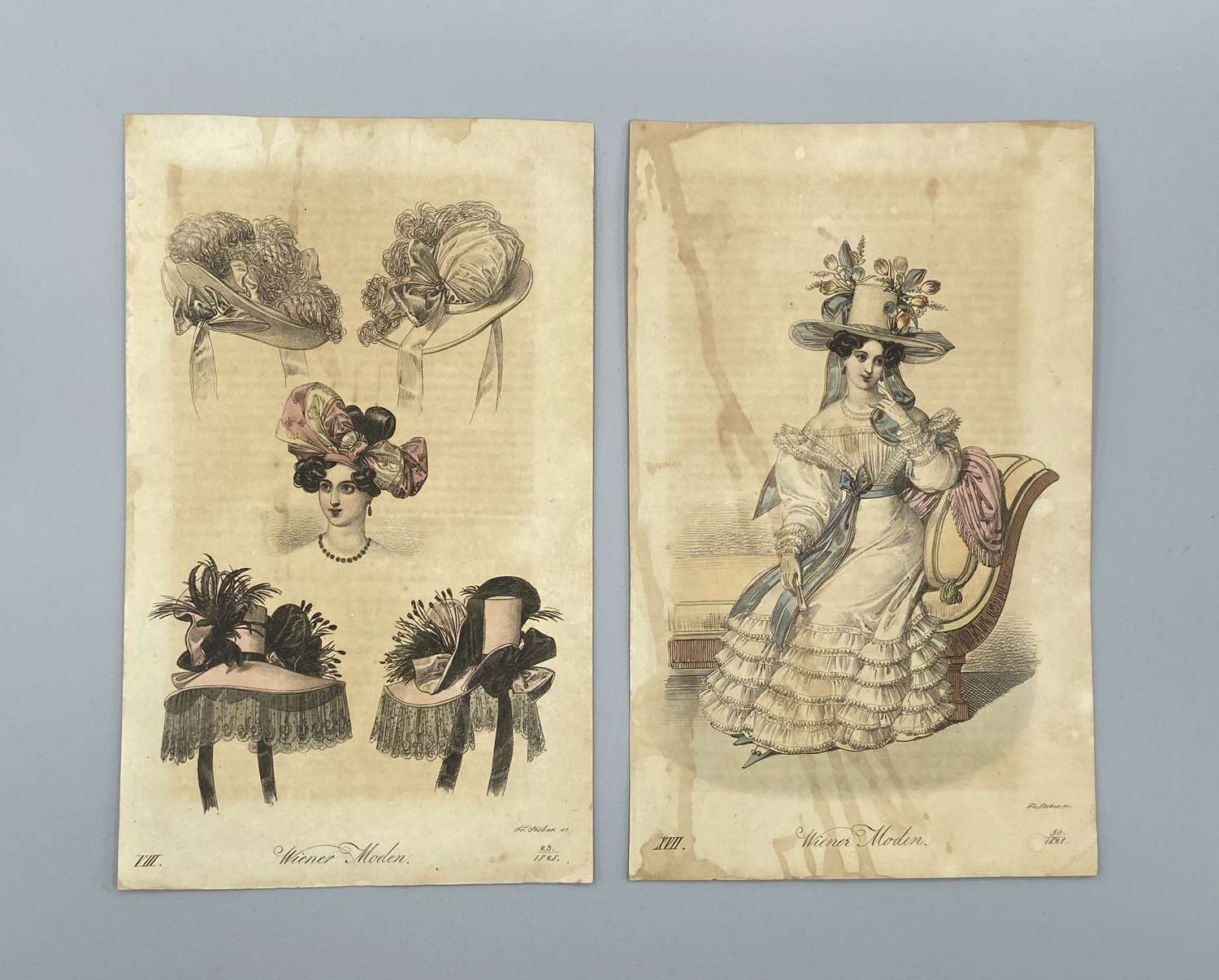 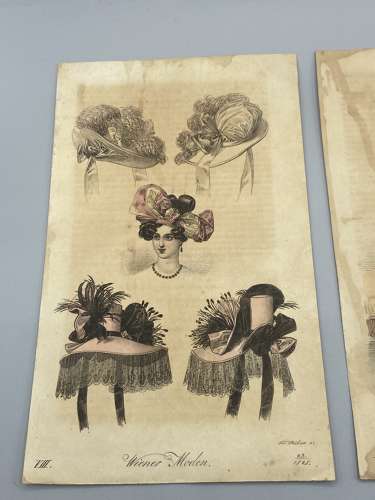 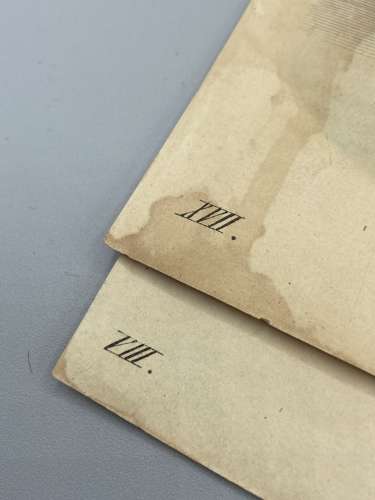 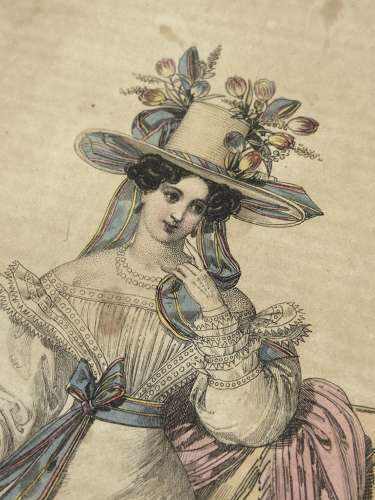 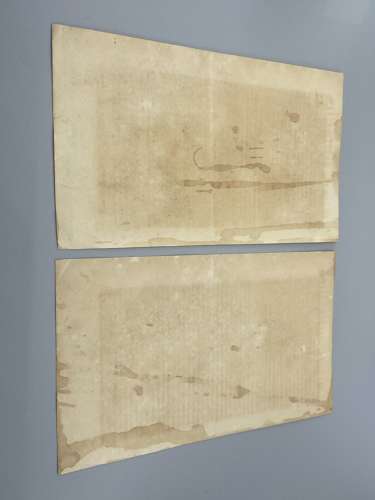 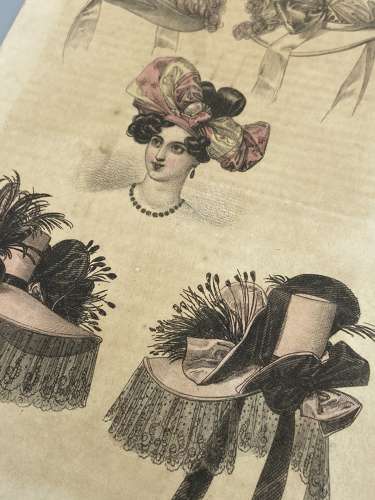 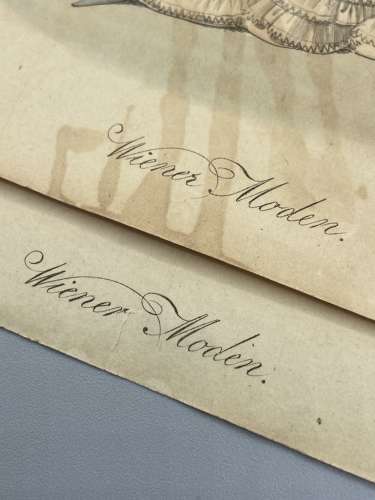 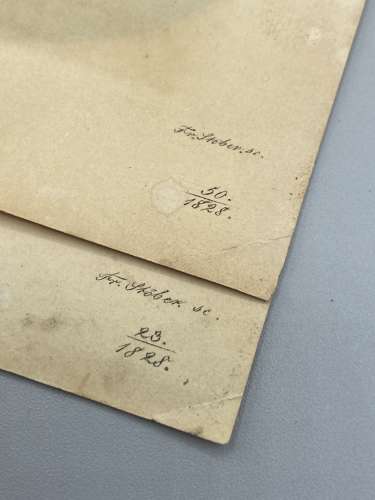 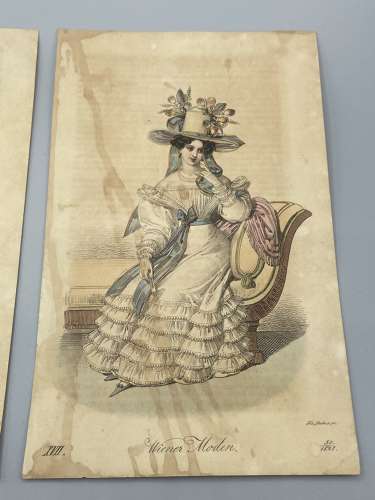 For sale is a pair of Antique Austrian 1828 Dated Prints for the Vienna Art Journal of Women Fashion by Wiener Moden. The first print is of five Georgian women’s hats marked (8) VIII Wiener Moden Fr. Stöber, 23/1828. And the other is of a Georgian women posted on a chain in a dress hat with a small fan in her hands and this is marked (17) XVII Wiener Moden Fr. Stöber, 50/1828. These original 1828 dated prints are in great condition considering it’s been just over 192 years since these prints have been released! They have age related staining so please see photos!!

More history about the art journal:

The Vienna Journal for Art, Literature, Theatre and Fashion was an Austrian cultural and fashion journal published in Vienna from 1816 to 1849. In addition to Adolf Bäuerle's Wiener Theaterzeitung, it is considered one of the most important Austrian cultural magazines of its time.

The magazine was founded in 1816 by Johann Schickh and Wilhelm Hebenstreit under the title Wiener Moden-Zeitung and Zeitschrift für Kunst, schöne Litteratur und Theater, from 2. July 1817 (No. 53) the title changed to Vienna Journal of Art, Literature, Theatre and Fashion. In 1849, the magazine was discontinued. Punch was published as a successor magazine until 1850. Belletristic-satirical daysheet.

The magazine was initially published twice a week, three times from 1818, four times from 1840 to 1841 and then five times a week.

The editor was Johann Schickh until 1835, after his death until 1844 Friedrich Witthauer, 1845 to February 1847 Gustav von Franck and then until his attitude in 1849 Johann August Bachmann.

The magazine is of great importance in costume history above all because of the numerous colored fashion illustrations.

This is guaranteed original or money back guaranteed. These will be sent via special delivery and dispatched within two to three working day’s.