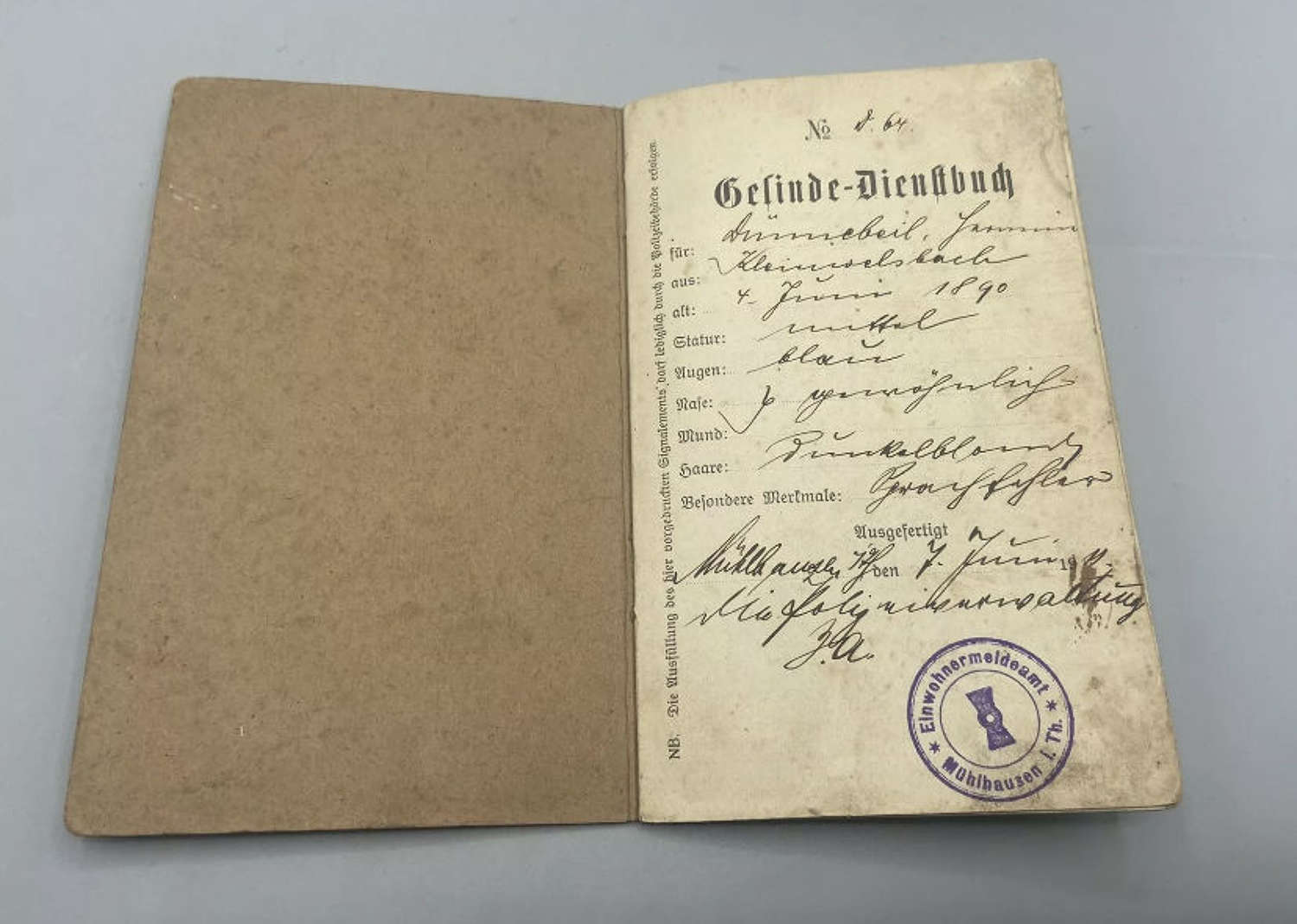 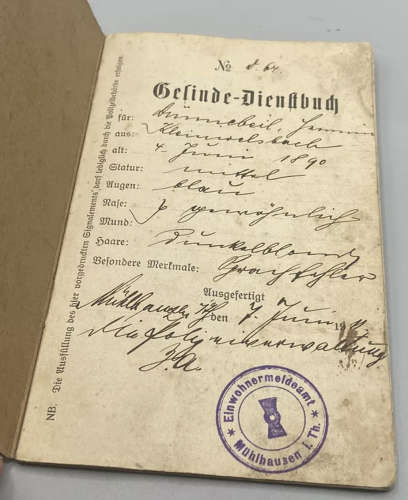 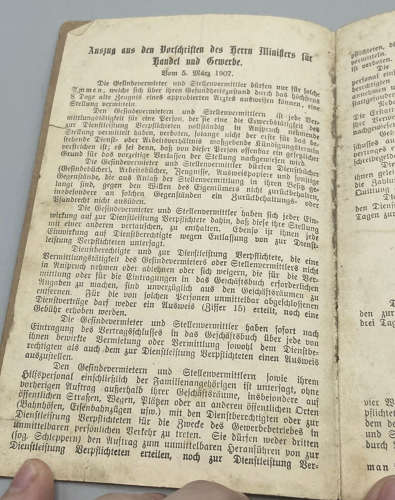 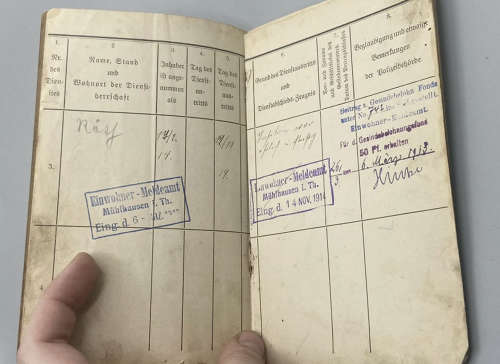 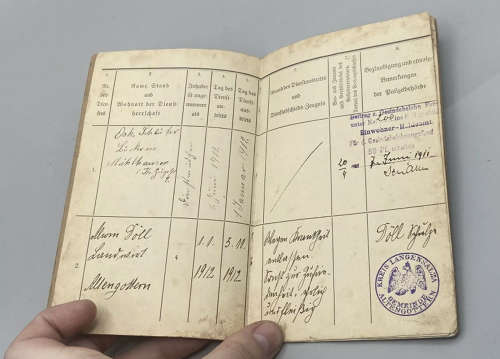 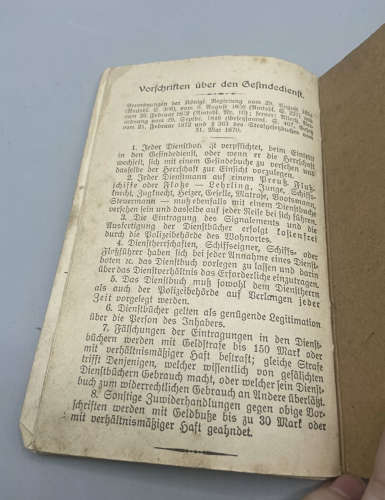 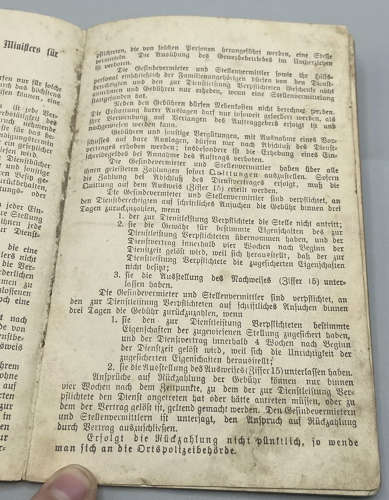 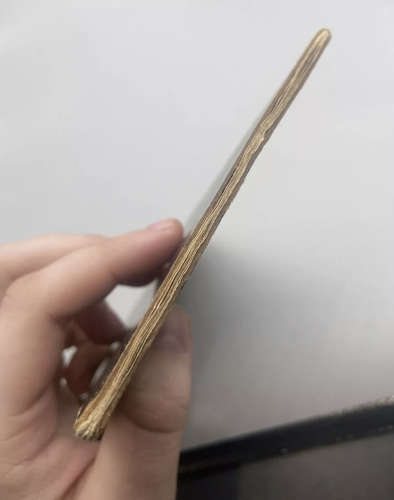 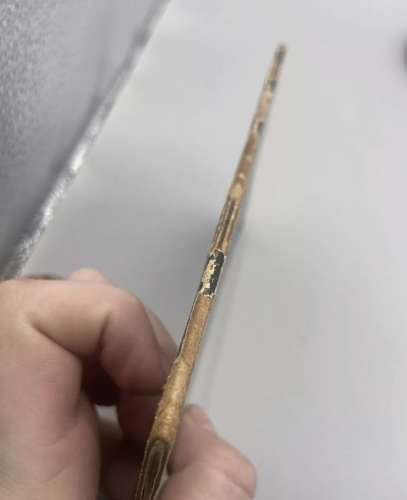 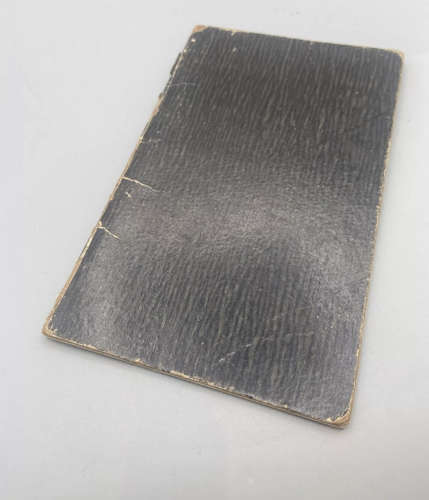 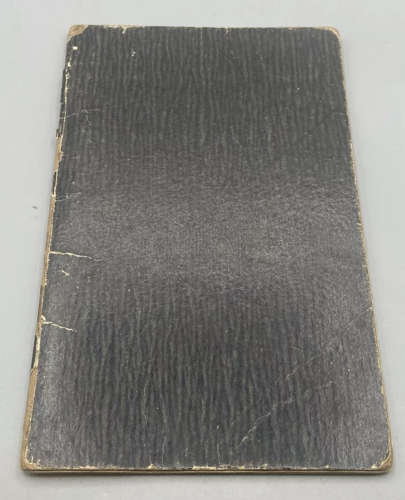 For sale is a Rare German Victorian Servant Order Gesindedienstbuch Work Book. The servants - until the 19th century. Also called Gesinde in the 19th century - had to carry a booklet (similar to a passport). In addition to an exact description and origin of the person, it also noted the job references. This service book belonged to Farmin Dummel, born 4th July 1890. Farmin worked in the following places for Osk.Schlufer in Mauthousan from July 1911 to 1st January 1912, Alum Doll in Allengothern from 1st of the 5th 1911 to 1912, Rasf Muhlhausen 1911 to 1914.

Excerpt from Mr. Minifier's drifts for trade and commerce. Bom March 5, 1907. The health care providers and employment agencies may only provide a position for those persons who can prove their health by means of a maximum 8-day certificate from a licensed doctor have put those obliged to serve in a completely demanding position, forbidden, as long as the first person does not eat for the past; unless that Berjon apparently has a regular service or employment relationship, relevant notice of termination (sentiment books), work books, certificates, identification papers and other things The landlords and employment brokers have every action on those who are obliged to perform service to the effect that they prohibit their position on service talk because of the discharge of those who are obliged to provide service If you do not make use of or refuse to make use of the employment agency, or if I refuse to provide the information required for the placement or for entries in the business book, they must be removed from the business premises immediately . Employment contracts may not be issued with ID (number 15), nor may a fee be charged. The landlords and employers have to issue an ID card to both the person entitled to the service and the person obliged to perform the service immediately after the conclusion of the contract has been entered in the business book for each rental or brokerage effected by them. Local landlords and employment agencies, as well as their helpers and staff, including family members, are not allowed to work outside of their business premises, in particular on public roads, paths, squares or other public places (train stations, individual railway trains, etc.) with authorized or obligated employees without prior order the purpose of the business enterprise to enter into direct personal contact. You are not allowed to give third parties (so-called Sdíleppern) the order to directly approach those who are obliged to lead the service, or to lead the service ift has found ftatt. Obliged, the bon-fold people are brought up, a place te the exercise of the commercial enterprise in the wandering offered. staff, including family members, do not disapprove of those who are ready to serve and those who are obliged to manage the service and only charge fees if a job brokerage. The reimbursement of cash expenses may only be demanded insofar as more uses are made at the client's request and fees and reasonable remuneration, with the exception of a boss transfer, are levied, in particular, the levying of a jihuſſes au bare merslagen, but only after the conclusion of the Service The landlords and sales agents have to immediately issue oil rides for all payments made to them. If the payment is made when the service fee is paid, the receipt must be shown on the ID (Biſfer 15). The landlords and employment agencies are obliged to pay the fee back to the authorized employee upon written request within three days, if 1. the person obliged to provide the service does not take up the position; 2.1 the person obliged to lead the service has taken over, and the period of service is canceled because I establish that the person obliged to lead the service does not approve the promised properties; 3. They have the issue of proof (Siffer 15) under the obligation. The lessor and employment agency are obliged to repay the fee to the person obliged to perform the service within three days upon written request if 1. the person obliged to perform the service has guaranteed certain properties of the assigned position and the service contract is canceled within 4 weeks after the service contract has been terminated because ſ I highlight the inaccuracy of the warranted properties; 2. You have failed to issue the identity card (section 15). Claims for additional payment of the fee can only be asserted within four weeks after the point in time at which the person obliged to perform the service commenced or should have commenced the service, or at which the contract is canceled. The municipal landlords and employment agencies are forbidden to exclude the right to payment by contract. If the payment is not made punctually, I should contact the local police authority.

1854 Bet Gelety regulations on the administration. Berorders der Königl. Government of August 29, Cathedral of February 26, 1872 (mtsbl. No. 10); furthermore; 9: 237) w (Smuts, p. 306), Domt 8 guguſt 18.56 (2 mtsbl.order dated September 29, 1846 (Geſetz amml. S. of February 21, 1872 and § 363 of the Strafgeſezbudyes dom May 31, 1870. 1. Every servant is obliged to change upon entry, to borrow me with a register and in the servants, or if he presents the serridajt the same to the master for inspection. :: Every servant on a Prussian. Geſelle, Matrole, pass ſone and the same on every trip with ſich. The helmsman - must also with a 3. The entry of the signaling element and the completion of the service books is carried out dead-free by the police authority of the place of residence . To have the service book presented and to enter the required information about the employment relationship in it. River apprentice, boy, Schils: or 5. The service book must be sent to both the servant and the police on Ve must be submitted at any time. 6. Service books are considered to be sufficient legitimation over the perſon of the owner. 7. Forgery of entries in the service books will be punished with a fine of up to 150 Mart or with proportional imprisonment; The same punishment applies to those who knowingly make use of forged service books or who leave a service book to others for unlawful use. 8. Any other violations of the above regulations will result in a fine of up to 30 Mart or with proportional imprisonment.