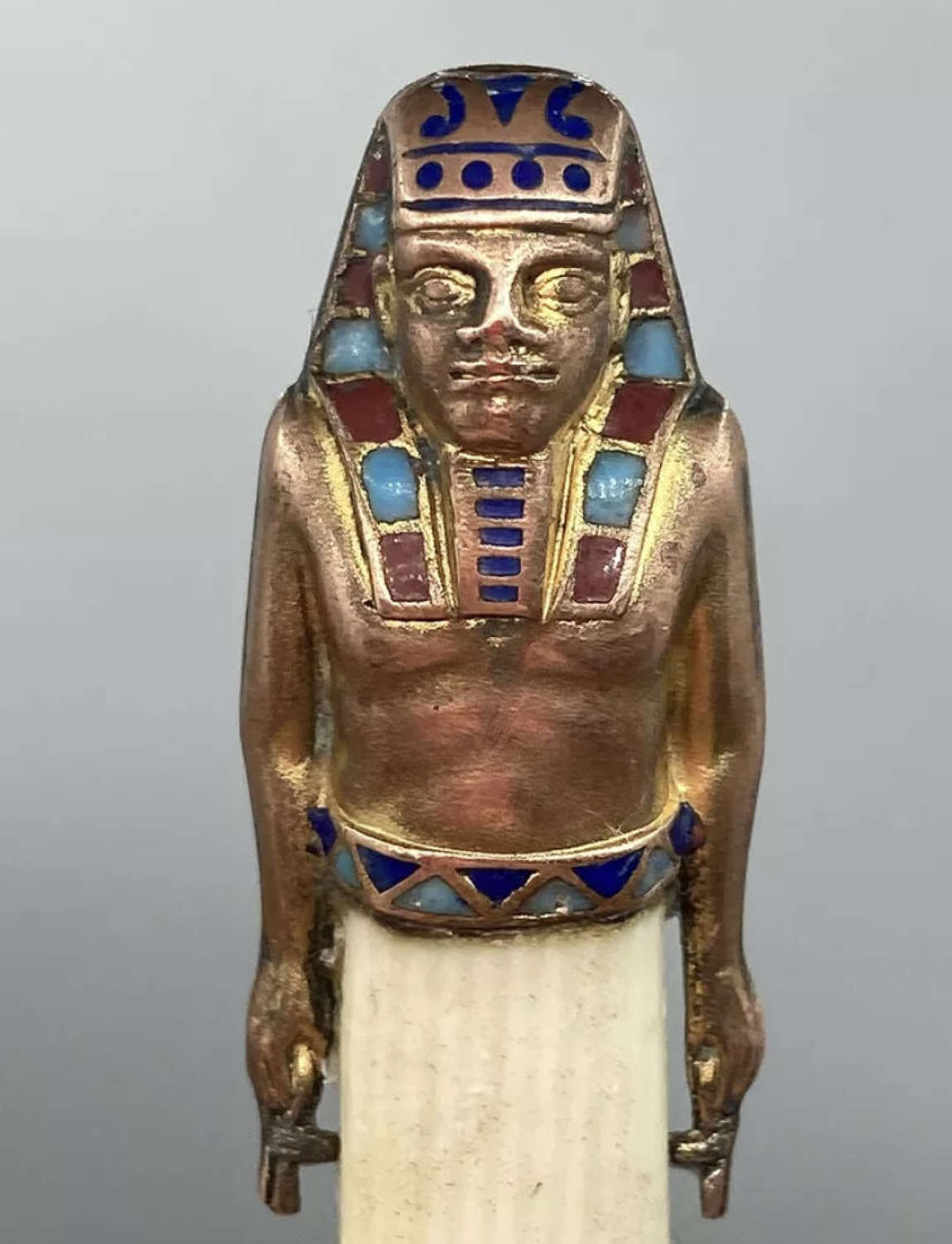 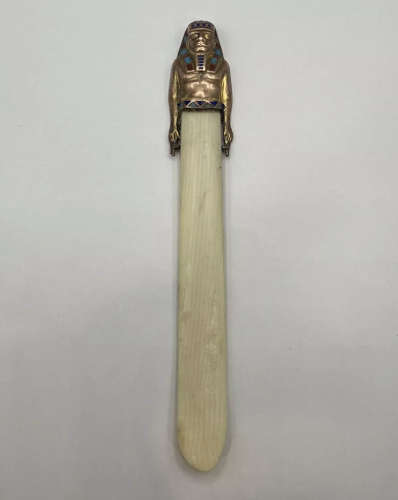 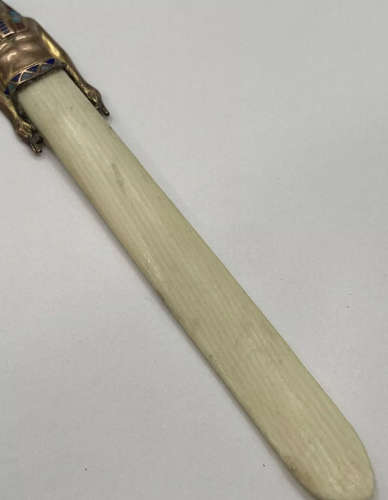 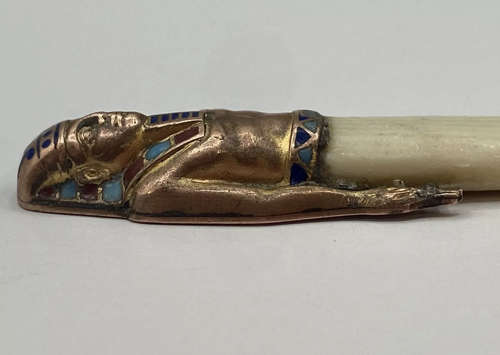 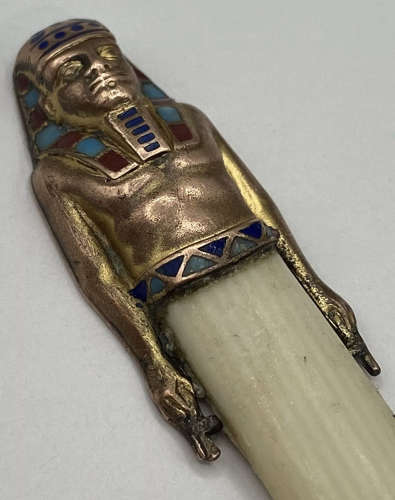 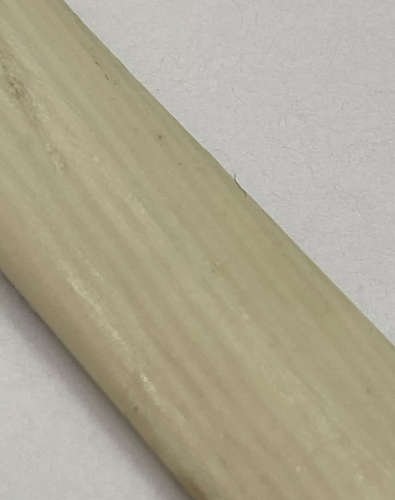 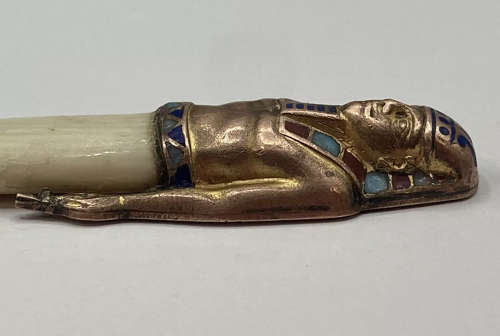 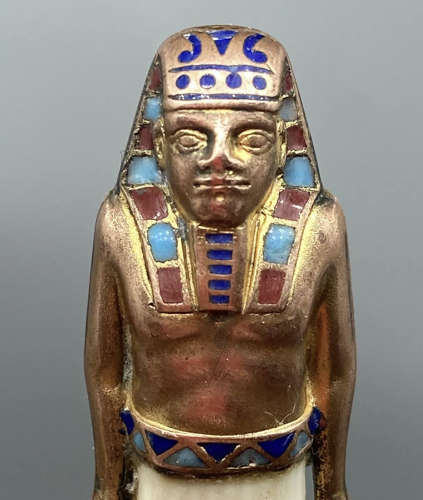 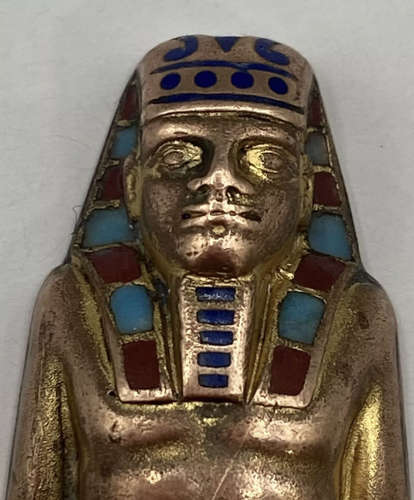 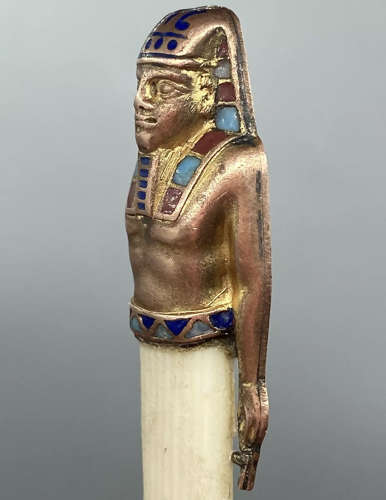 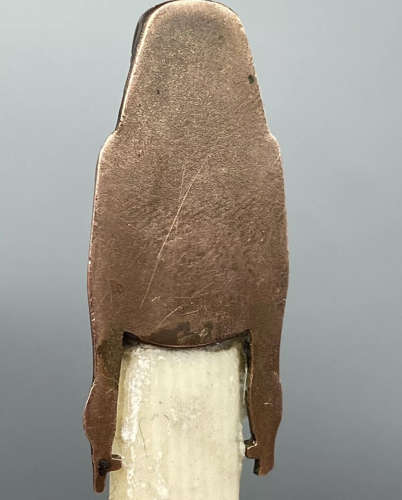 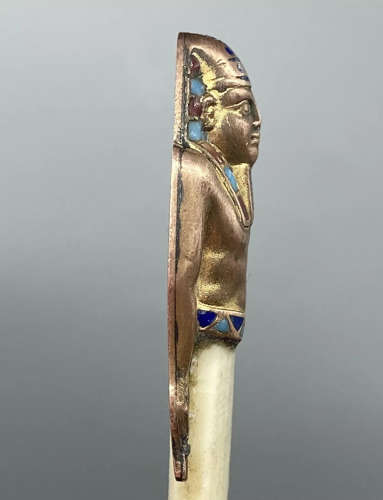 For sale is a Beautiful Victorian Egyptian Revival Pharaoh Copper & detailed Enamel Letter Opener circa 1870s. This is a beautiful letter opener made from copper, enamel decorated jewels, silver overlay for the keys in the pharaohs hands, and carved cow-bone. In good condition, apart from rubbing to gilt overlay and small dark blue enamel chip on top of head. This measures 10.5cm In length x 1.5cm width.

Egyptomania is an extreme obsession for all things Egyptian and, throughout history, a passion for Egypt has been a recurring theme. By the time Napoléon Bonaparte stormed Egypt at the end of the eighteenth century, Egyptomania had already reached the level of obsession in France and his actions thrust it even further, onto the world stage. Not strictly a military campaign, scientists and scholars accompanied the army and noted their observations for all the world to share. While Bonaparte was eventually defeated, this campaign led to the 1799 discovery of the Rosetta Stone, which was essential in the creation of the field of Egyptology.

At the dawn of the nineteenth century, this new field of Egyptology spawned numerous archaeological expeditions to the region with the anticipation of treasure among the tombs of the Pharaohs. From 1859-1869, the Suez Canal was under construction and the French fascination for the project was so pervasive that the Paris Exposition of 1867 featured Egyptian-inspired jewels from Boucheron, Mellerio, Baugrand, and others. Empress Eugénie herself (wife of Napoléon III) requested jewels in the Egyptian taste from her court jeweler, Lemonnier (most famously an aigrette with a lotus flower and bird’s wings). The thirst for Egyptian-themed jewels soon spread across the continent and jewelers such as Giuliano, Castellani, and Fontenay included some Egyptian revival jewels alongside their other archaeological and revival styles.

Please see photos for more details. Guaranteed original or money back. This will be sent via special delivery and dispatched within two to three working day’s.