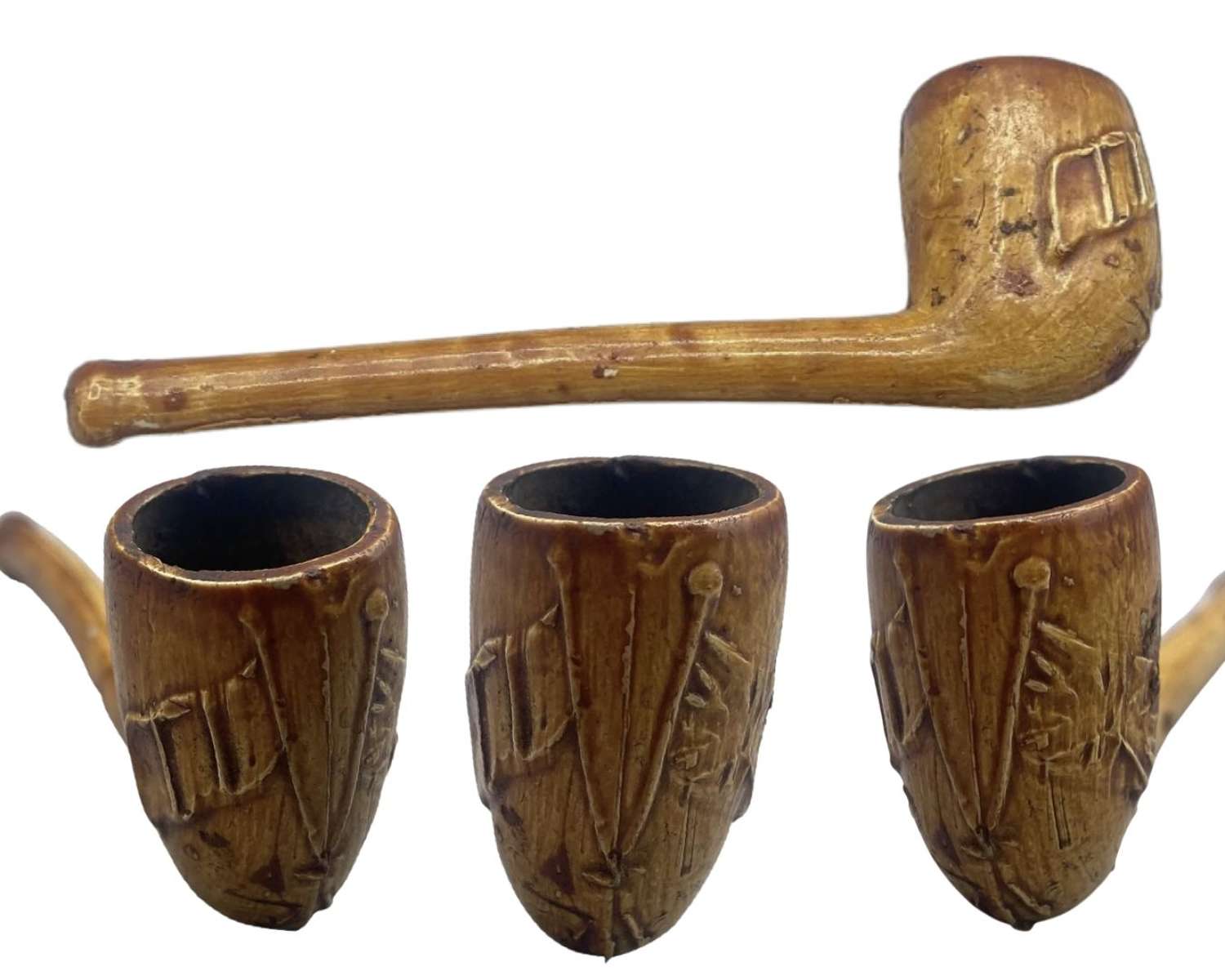 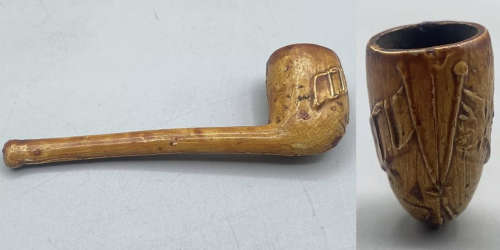 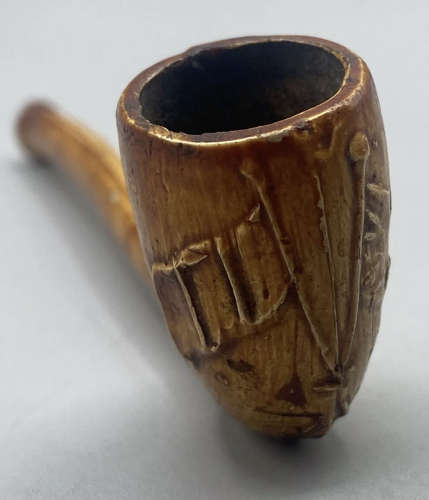 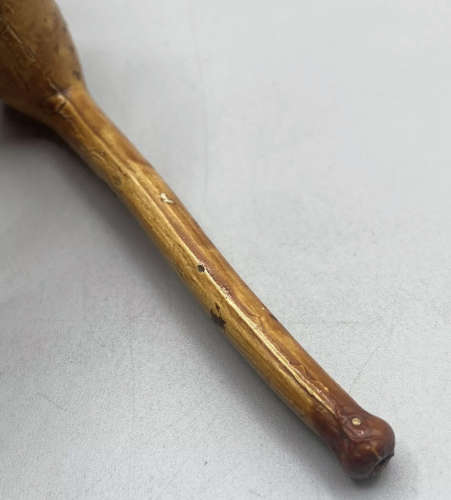 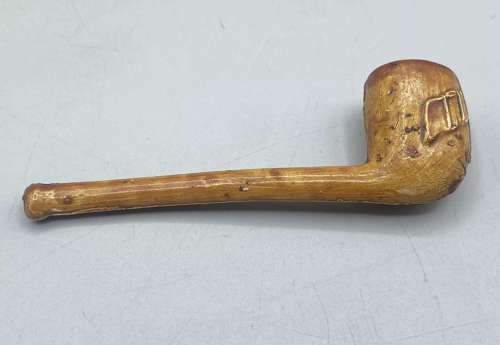 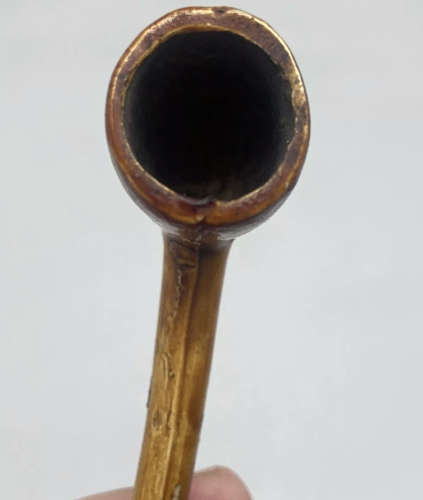 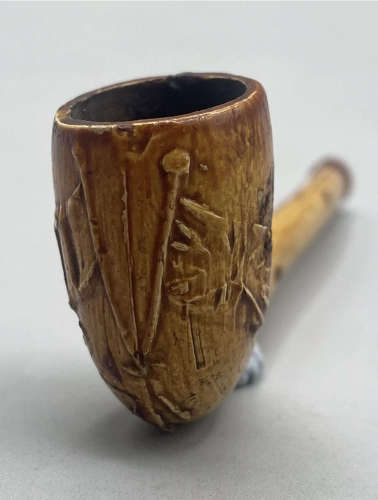 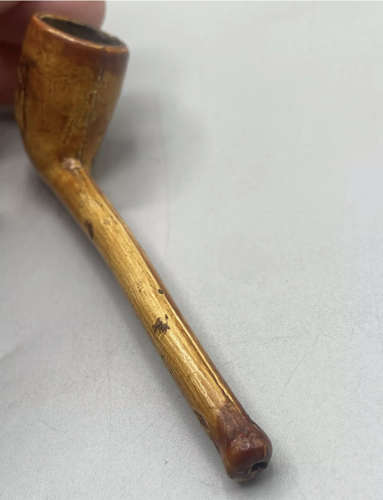 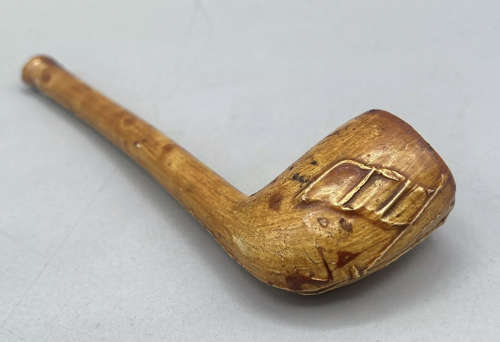 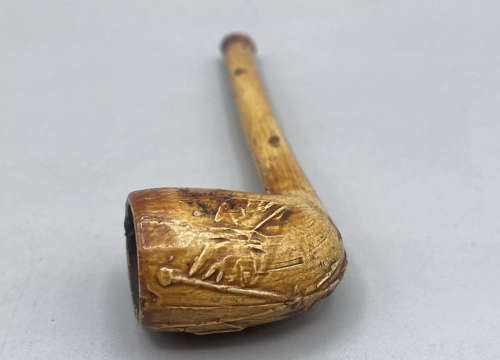 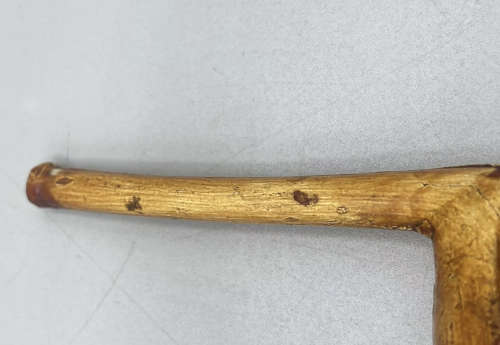 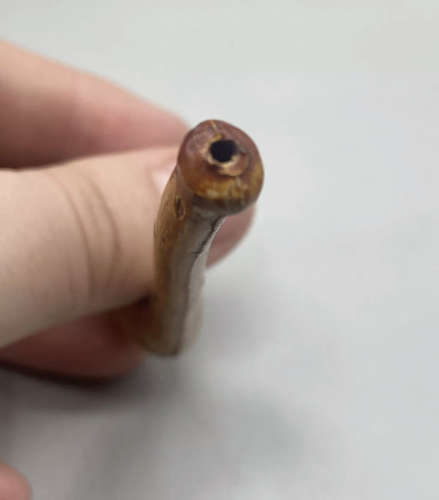 For sale is an Antique Battle Of Trafalgar Clay Pipe featuring a Crossed Union Jack & French Flag. This clay pipe was produced on the British Victory of trafalgar. This is an exceptional piece, especially the fact that it is still in one piece. This measures 9cm in length x 3cm maximum height x pipe stem 0.5mm diameter. This is guaranteed original or money back.

The Battle of Trafalgar (21 October 1805) was a naval engagement between the British Royal Navy and the combined fleets of the French and Spanish Navies during the War of the Third Coalition (August–December 1805) of the Napoleonic Wars (1803–1815).

As part of Napoleon's plans to invade England, the French and Spanish fleets combined to take control of the English Channel and provide the Grande Armée safe passage. The allied fleet, under the command of French Admiral Villeneuve, sailed from the port of Cádiz in the south of Spain on 18 October 1805. They encountered the British fleet under Admiral Lord Nelson, recently assembled to meet this threat, in the Atlantic Ocean along the southwest coast of Spain, off Cape Trafalgar.

Nelson was outnumbered, with 27 British ships of the line to 33 allied ships including the largest warship in either fleet, the Spanish Santisima Trinidad. To address this imbalance, Nelson sailed his fleet directly at the allied battle line's flank, hoping to break it into pieces. Villeneuve had worried that Nelson might attempt this tactic but, for various reasons, had made no plans in case this occurred. The plan worked almost perfectly; Nelson's columns split the Franco-Spanish fleet in three, isolating the rear half from Villeneuve's flag aboard Bucentaure. The allied vanguard sailed off while it attempted to turn around, giving the British temporary superiority over the remainder of their fleet. The ensuing fierce battle resulted in 22 allied ships being lost, while the British lost none.

The tactic exposed the leading ships in the British lines to intense fire from multiple ships as they approached the Franco-Spanish lines. Nelson's own HMS Victory led the front column and was almost knocked out of action. Nelson was shot by a French musketeer and died shortly before the battle ended. Villeneuve was captured along with his flagship Bucentaure. He attended Nelson's funeral while a captive on parole in Britain. The senior Spanish fleet officer, Admiral Federico Gravina, escaped with the remnant of the Franco-Iberian fleet (a third of what it had been in number of ships); he died of wounds sustained during the battle five months later.

The victory confirmed the naval supremacy Britain had established during the course of the eighteenth century, and was achieved in part through Nelson's departure from prevailing naval tactical orthodoxy.

When Rosily arrived in Cádiz, he found only five French ships, rather than the 18 he was expecting. The surviving ships remained bottled up in Cádiz until 1808 when Napoleon invaded Spain. The French ships were then seized by the Spanish forces and put into service against France.

HMS Victory made her way to Gibraltar for repairs, carrying Nelson's body. She put into Rosia Bay, Gibraltar and after emergency repairs were carried out, returned to Britain. Many of the injured crew were taken ashore at Gibraltar and treated in the Naval Hospital. Men who subsequently died from injuries sustained at the battle are buried in or near the Trafalgar Cemetery, at the south end of Main Street, Gibraltar.

One Royal Marine officer was killed on board Victory; Captain Charles Adair. Royal Marine Lieutenant Lewis Buckle Reeve was seriously wounded and lay next to Nelson.

The battle took place the day after the Battle of Ulm, and Napoleon did not hear about it for weeks—the Grande Armée had left Boulogne to fight Britain's allies before they could combine their armies. He had tight control over the Paris media and kept the defeat a closely guarded secret for over a month, at which point newspapers proclaimed it to have been a tremendous victory. In a counter-propaganda move, a fabricated text declaring the battle a "spectacular victory" for the French and Spanish was published in Herald and attributed to Le Moniteur Universel.

Vice-Admiral Villeneuve was taken prisoner aboard his flagship and taken back to Britain. After his parole in 1806, he returned to France, where he was found dead in his inn room during a stop on the way to Paris, with six stab wounds in the chest from a dining knife. It was officially recorded that he had committed suicide.

Despite the British victory over the Franco-Spanish navies, Trafalgar had negligible impact on the remainder of the War of the Third Coalition. Less than two months later, Napoleon decisively defeated the Third Coalition at the Battle of Austerlitz, knocking Austria out of the war and forcing the dissolution of the Holy Roman Empire. Although Trafalgar meant France could no longer challenge Britain at sea, Napoleon proceeded to establish the Continental System in an attempt to deny Britain trade with the continent. The Napoleonic Wars continued for another ten years after Trafalgar.

Nelson's body was preserved in a barrel of brandy for the trip home to a hero's funeral.

The photographs make up part of the description, I will describe the item the best I can and to the best of my knowledge. As the buyer please view the photos carefully before purchasing.Guaranteed original or money back. This will be sent via 1st class signed for if the value is under £60 and anything over will be sent via express 48 Parcelforce or Royal Mail special delivery and dispatched within two to three working day’s. Also happy to post world wide.