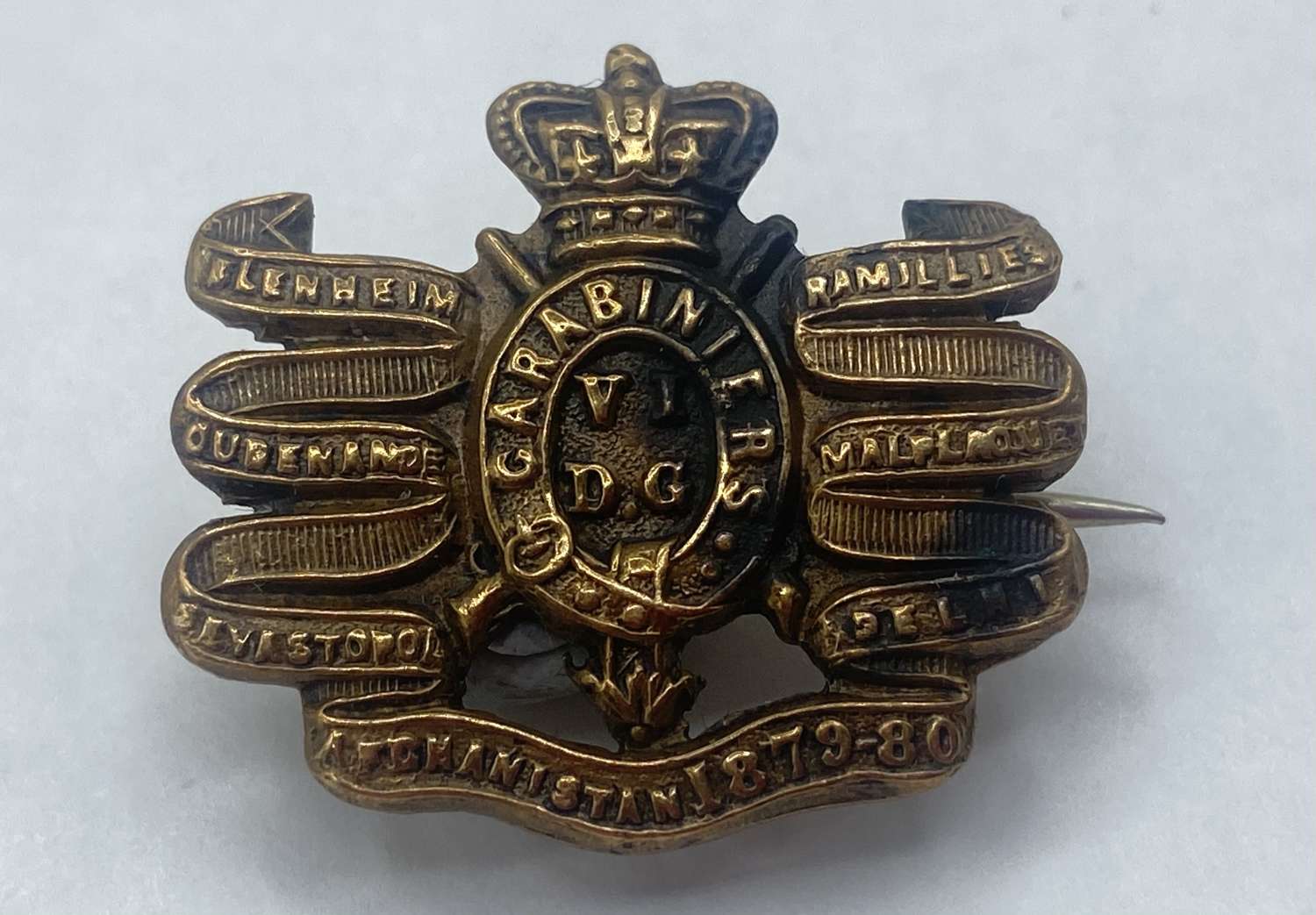 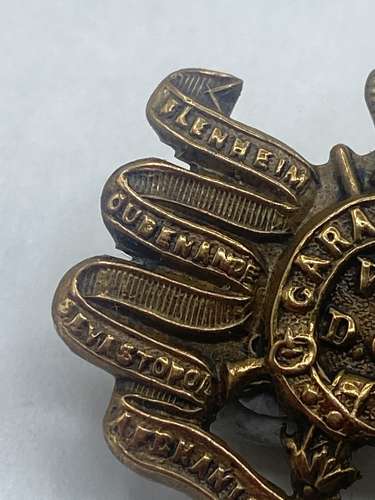 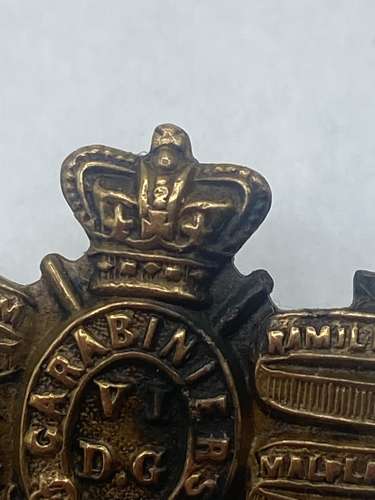 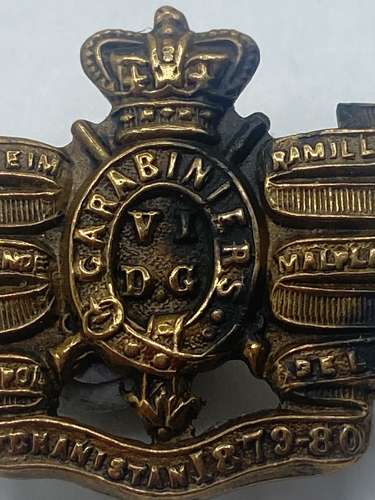 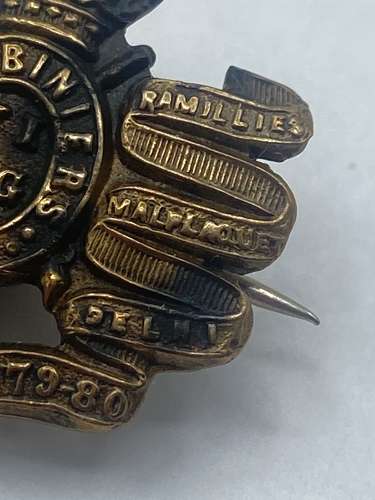 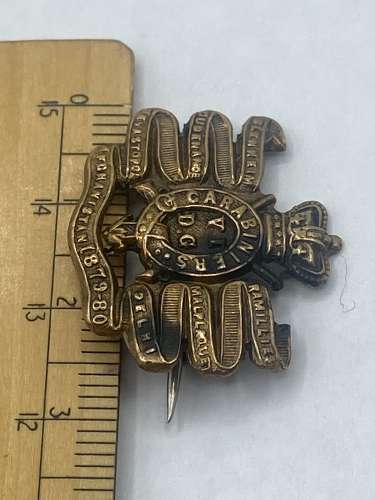 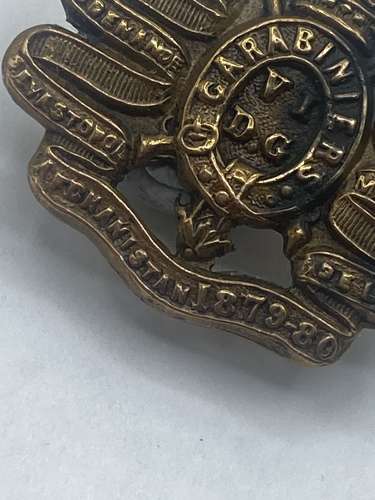 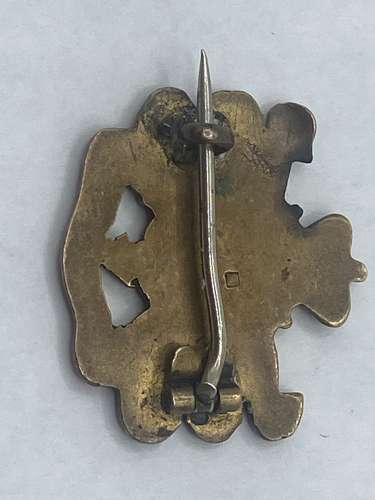 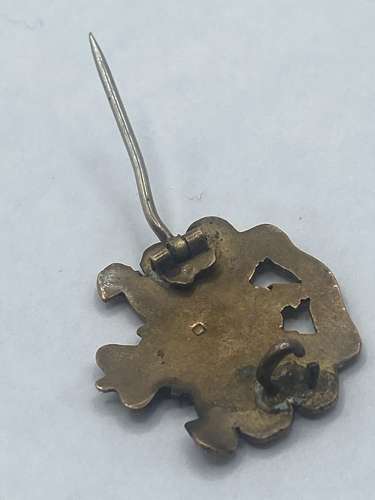 This badge states the following:

The British were the first to use battle honours on flags, and the practice did not take hold until the Napoleonic wars. The first and only battle honour granted to cavalry before this time was "Emsdorf", granted in 1768 to the 15th Light Dragoons for an action in 1760.

The first battle honour for infantry is now considered to be the motto "Virtutis Namurcensis Proemium", recognised in the 1747 Clothing Regulations as a distinction of the 18th Regiment of Foot for bravery at the battle of Namur in 1695. But as a Latin motto referring to a battle, this honour remains unique. In 1910 fourteen regiments, including the 18th, were granted the textual honour "Namur".

Some battle honours in the British Army are badges, and the first real battle honour for infantry was such a badge. "Gibraltar" was awarded to four regiments in 1784 for the siege of 1779-83, and consists of a Castle and Key subscribed "Montis Insignia Calpe" and superscribed "Gibraltar". Since there were other actions at Gibraltar, this one was qualified in 1909 as being "Gibraltar, 1779-83". The next battle honour granted was "Minden" in 1801 for an action in 1759, and later in 1801 "Egypt" in the form of a Sphinx badge was granted to over forty regiments. Several honours were then granted almost immediately to various regiments during the Peninsular campaign, and the practice became firmly established. These honours were lettered rather large directly on the flag with little or no thought to future growth. Three battle honours and a central badge tended to fill a whole flag. By the end of the Napoleonic wars most British flags were in shreds, and most regiments received new ones in the 1820s. The battle honours on these were much smaller and mounted on scrolls. Some sixty battle honours were subsequently granted retroactively for the 17th and 18th centuries, the most recent being "Belleisle" granted in 1951 to eight regiments for an action in 1761.

The procedure for awarding battle honours was originally extremely arbitrary. For example, the victories of the Duke of Wellington in the Napoleonic Wars were copiously honoured, but those of the Duke of Marlborough in the War of Spanish Succession were entirely ignored. By the mid-19th Century, honours were being awarded for contemporary actions that were little more than skirmishes compared with the great European battles of the 18th Century. Much, too, depended on the persistence (or lack thereof) of successive individual colonels in badgering Horse Guards for honours for their regiments: to give but one example, the honour for Corunna was first awarded (to three battalions) in 1811; between then and 1842, it was awarded to a further 27 regiments and battalions. A committee was therefore set up under Major-General Sir Archibald Alison in 1881 to determine the honours that should be awarded to the various regiments for past battles. Although the Alison Committee remedied the worst of the injustices when it reported in 1882 (by, inter alia, awarding the honours Blenheim, Ramillies, Oudenarde and Malplaquet), another committee had to be set up in 1909 under the chairmanship of Lieutenant General Sir Spencer Ewart to continue the work.

The majority of battle honours are displayed simply as the name of the award inscribed on a decorative scroll. A number of honours, particularly those which were considered to be of particular significance, were awarded with a badge that in some way represented the engagement or theatre. Early examples were the castle and key for Gibraltar, mentioned above, and the sphinx for Egypt. Tiger and elephant badges were frequently awarded for engagements on the Indian sub-continent. Different badges might be awarded to different units for the same battle or campaign: the award Hindoostan, for example, was awarded without a badge to some regiments, with a tiger to others, and with an elephant to yet others.

Guaranteed original or money back! This will be sent via Royal Mail 1st class signed for and dispatched within two working days.