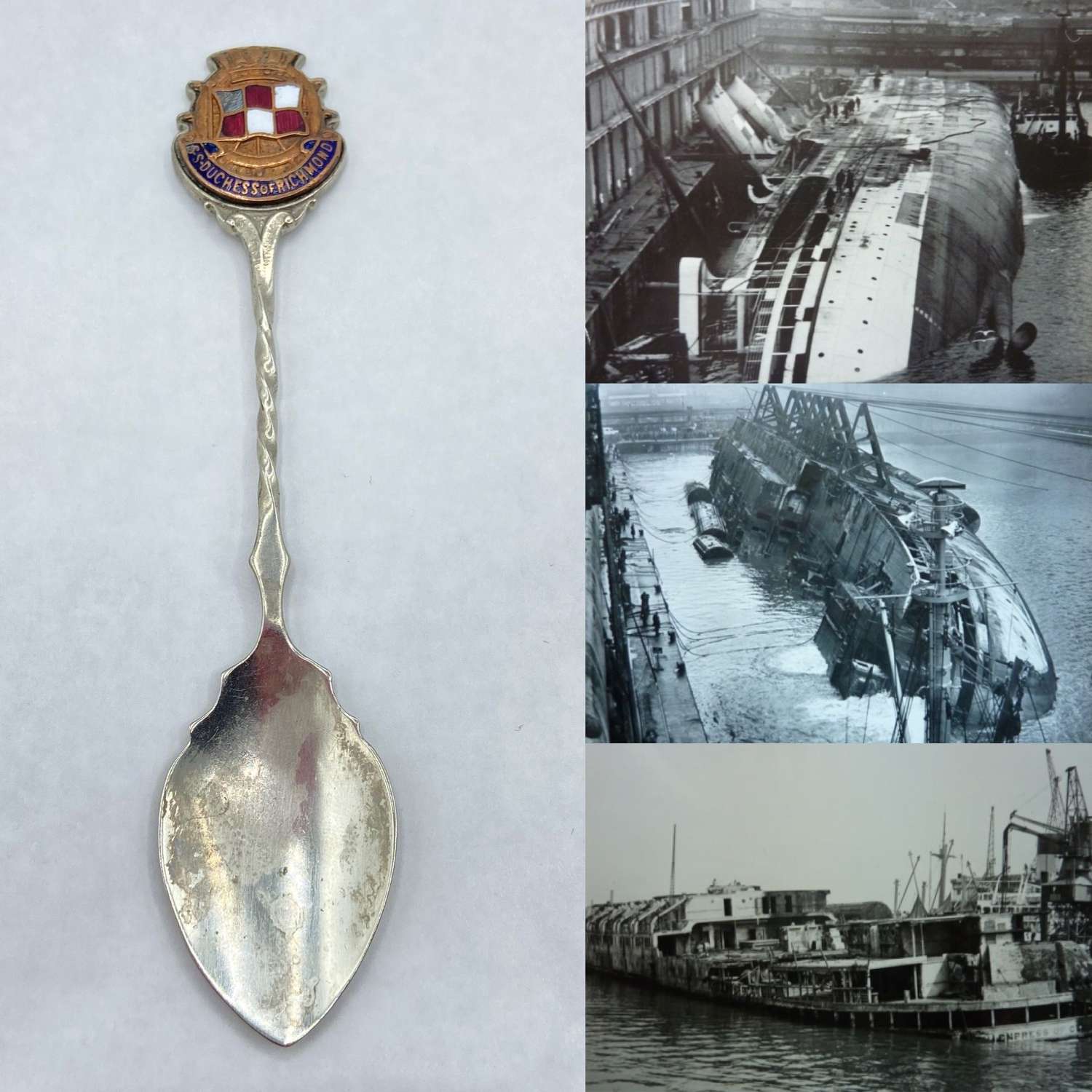 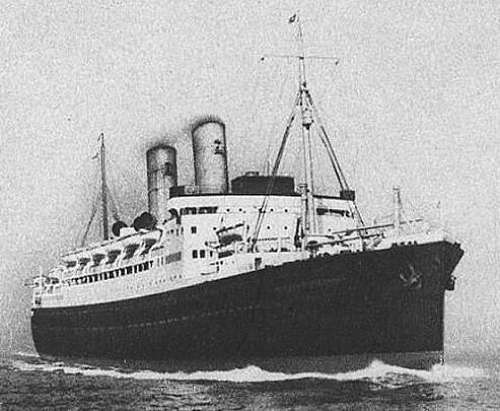 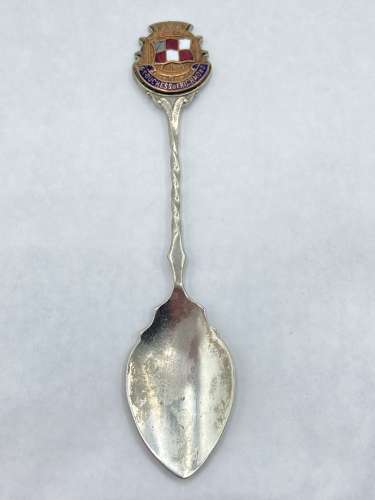 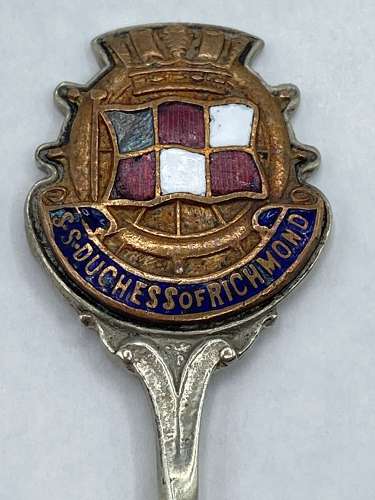 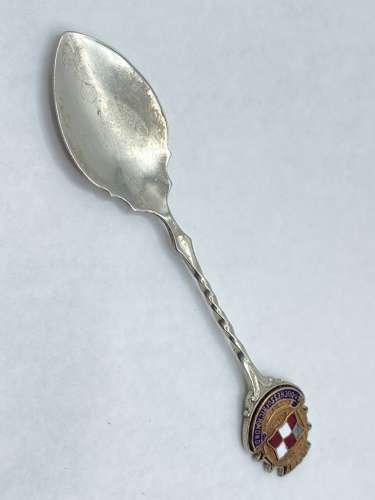 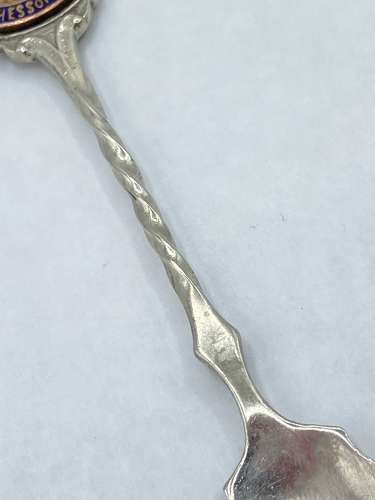 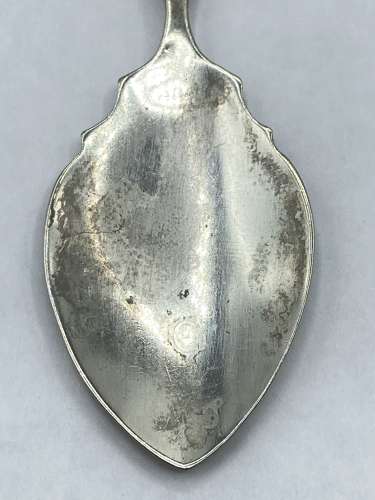 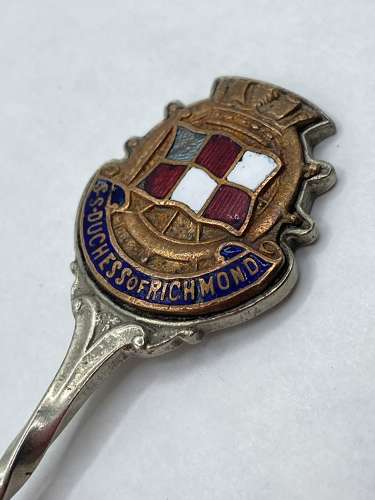 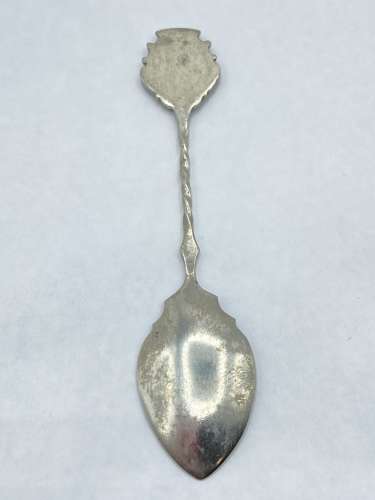 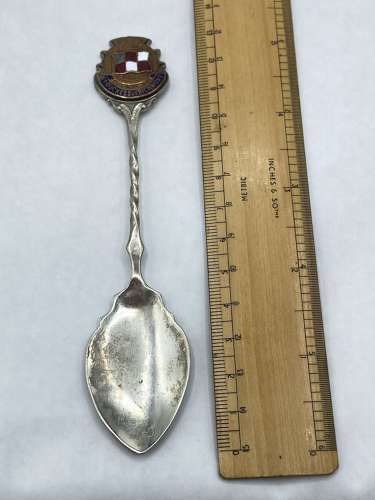 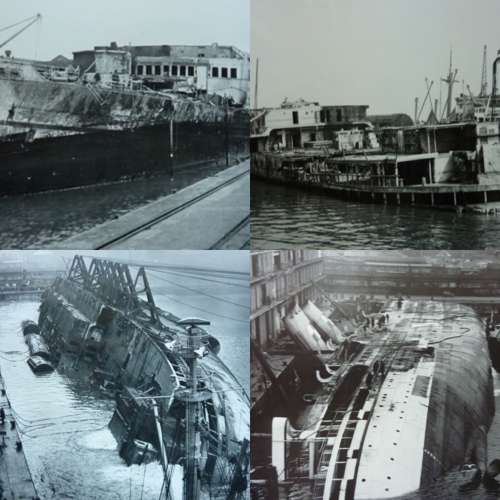 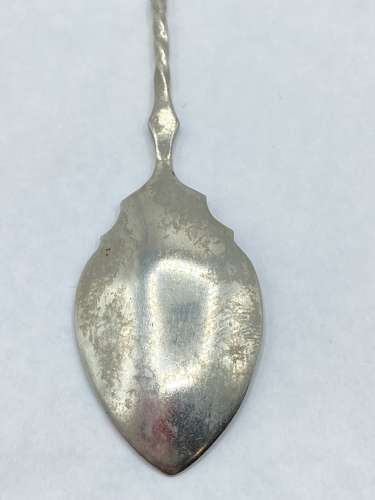 £40.00 Approx $49.08, €46.57, £40
(1 in stock)
Qty
For sale is a WW2 Canadian Empress Of Canada Troopship- Maiden Voyage Souvenir Spoon. Mostly in good condition, however the first white enamel section  of flag is missing, and slight staining to spoon head. This spoon was produced in the late 1920s, produced as a souvenir for her maiden voyage In 1929 where the likes of Chief Scout, Lt. General Sir Robert Baden-Powell, and Lady Baden-Powell were passengers. The spoon is silver or silver plate (unmarked) with a copper and enamel emblem with the enamel scroll stating “S.S Duchess Of Richmond”. In Ww2 she was requisitions as a troop ship, and in 1953 she caught fire and, despite the tremendous efforts of firemen from all over the north-west of England, she eventually slide on her side along the dock bottom and became a burnt-out hulk.
Detailed history of the Duchess of Richmond below:
The EMPRESS OF CANADA was launched as the DUCHESS OF RICHMOND on 18th June 1928, and sailed on her maiden voyage from Liverpool on 26th January 1929; this taking the form of a six-week cruise to the Atlantic Islands and the West Coast of Africa. Amongst her passengers were the Chief Scout, Lt. General Sir Robert Baden-Powell, and Lady Baden-Powell. The new Duchess could carry 580 passengers in cabin-class, 480 in tourist-class and 510 in third-class, with a crew of 510.
EMPRESS OF CANADA (ex DUCHESS OF RICHMOND)
built by John Brown & Co. Ltd. at Clydebank in 1929.   Yard No: 523
Official Number: 160631     Signal Letters:  G S V R
Gross Tonnage: 20,022,   Nett:  11,238    Length: 600ft     Breadth: 75.1ft
Owned by the Canadian Pacific Railway Company
(Canadian Pacific Steamships - Managers)
6 steam turbines, single-reduction gearing to twin screws.
Speed: 18 knots,  maximum: 19.
In November 1932 the DUCHESS OF RICHMOND was in collision in fog with the Cunard liner ALAUNIA off Sorel, Quebec; and three years later she carried the Duke and Duchess of Kent on their honeymoon cruise.
On 14th February 1940 the DUCHESS OF RICHMOND was requisitioned as a troopship and left Liverpool for Suez. During the invasion of North Africa, the Duchess was close to the P&O liner STRATHALLAN when that ship was sunk by two torpedoes on 21st December 1942. In March 1945 she sailed to Odessa carrying 3,700 Russians who had been held prisoner in France.
Eight months later the DUCHESS OF RICHMOND arrived at Liverpool from Rangoon with the last of the prisoners-of-war from Sumatra and Singapore. On her return from Bombay in March 1946, the Duchess was held in quarantine until four smallpox cases among the service personnel on board were removed into isolation. Coincidentally, the GEORGIC also arrived at Liverpool with a smallpox case at this time, and these incidents resulted in nearly 10,000 people taking part in the largest mass vaccination of passengers ever undertaken at Liverpool.
In May 1946 the DUCHESS OF RICHMOND was sent to the Fairfield Yard at Govan for complete refurbishing. She re-appeared as the EMPRESS OF CANADA, and her passenger complement was reduced to 397 in first-class and 303 in tourist-class. On 16th July 1947 the EMPRESS OF CANADA sailed on her first post-war commercial voyage from Liverpool to Quebec and Montreal under the command of Captain E.A. Shergold.
On 10th January 1953, the EMPRESS OF CANADA entered Gladstone Dock for her routine winter overhaul. She was due to return to service on 11th February. But this was a date she was unable to keep. On Sunday 25th January, whilst lying in Gladstone No.1 Branch Dock, the 'Empress' caught fire and, despite the tremendous efforts of firemen from all over the north-west of England, she eventually slide on her side along the dock bottom and became a burnt-out hulk.
Work to right the EMPRESS OF CANADA commenced immediately as she was completely blocking a much-needed deep water berth at Liverpool. Her masts, funnels and much of the superstructure had to be cut away, and it was not until over a year later, on Saturday 6th March 1954, that the salvage operation was successfully completed. It was the greatest salvage operation of its kind ever tackled in Europe and was a feat of skill rivalled only by the salvage of the NORMANDIE in New York and the battleship OKLAHAMA at Pearl Harbour.
This will be sent via Royal Mail 1st class signed for and dispatched within two working days.