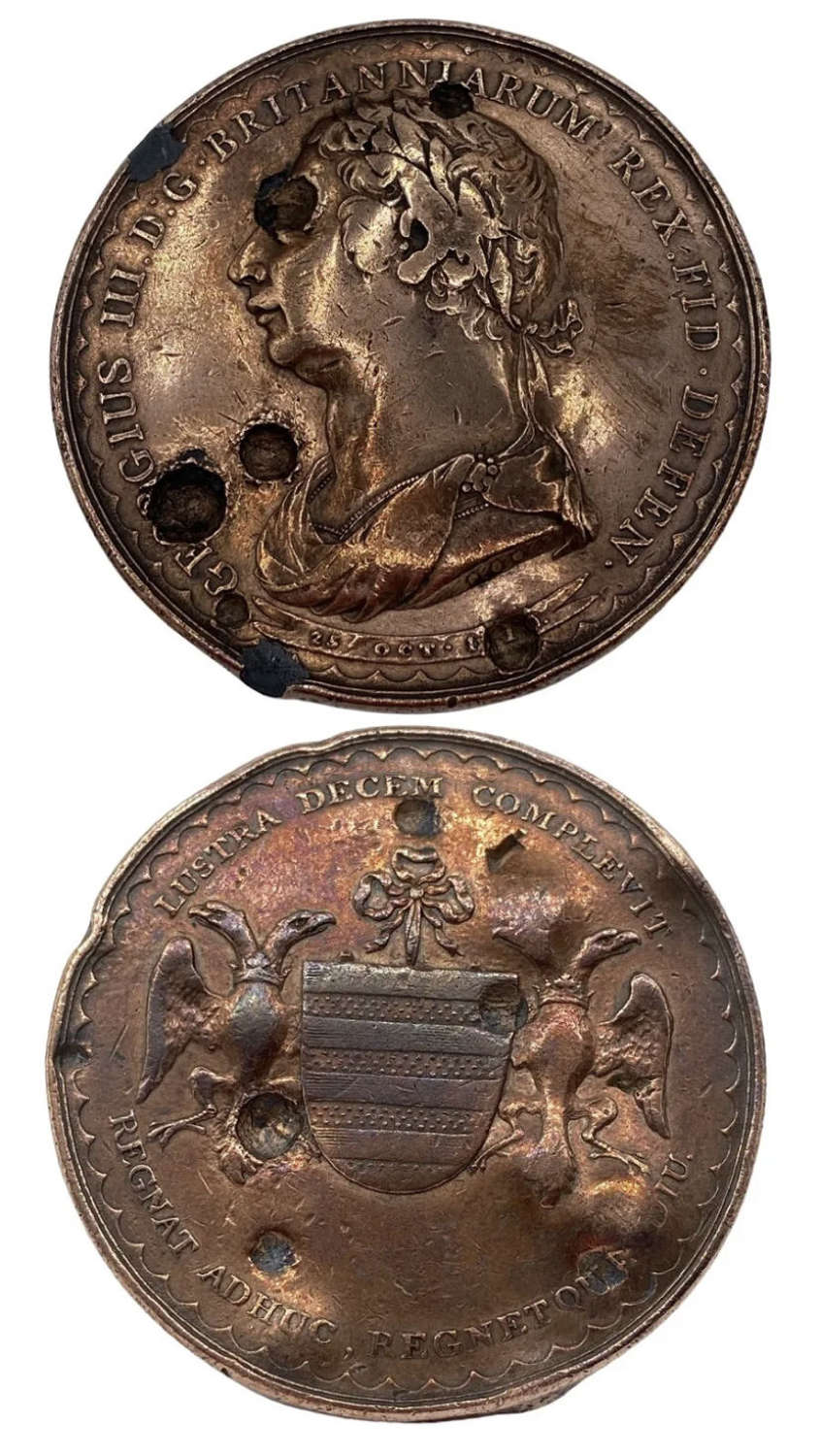 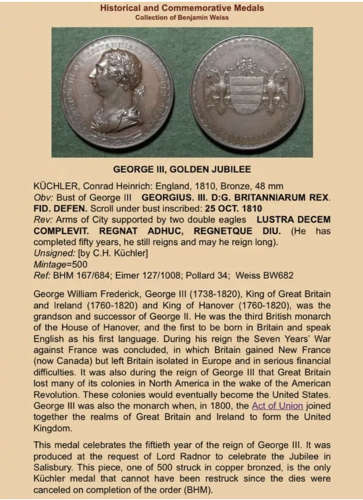 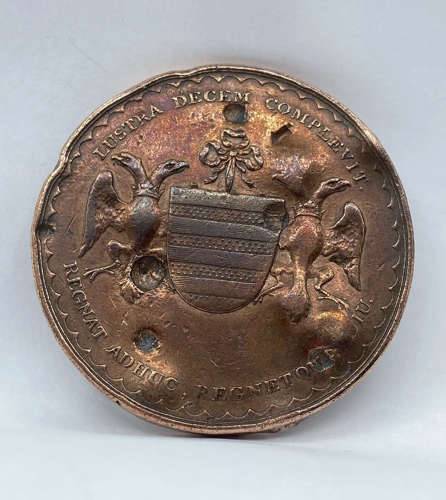 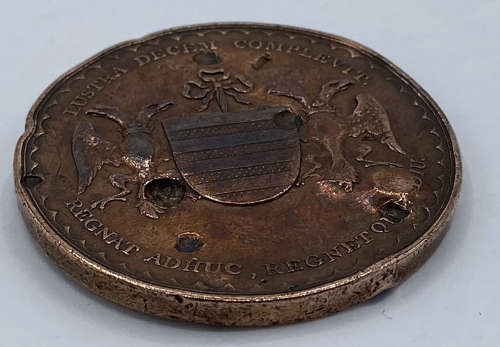 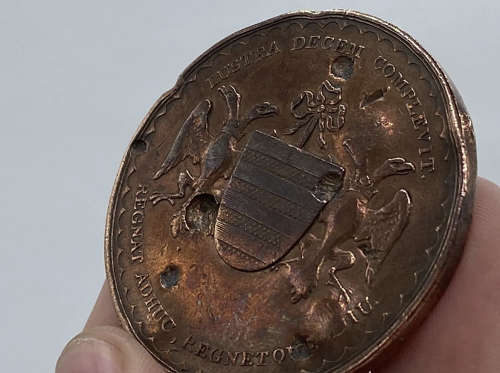 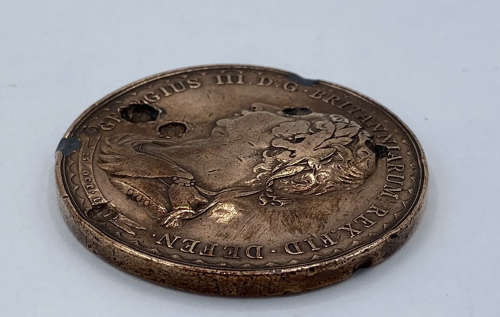 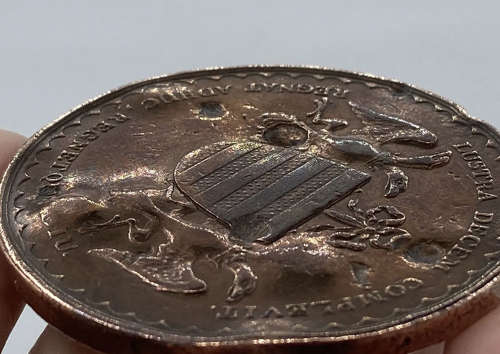 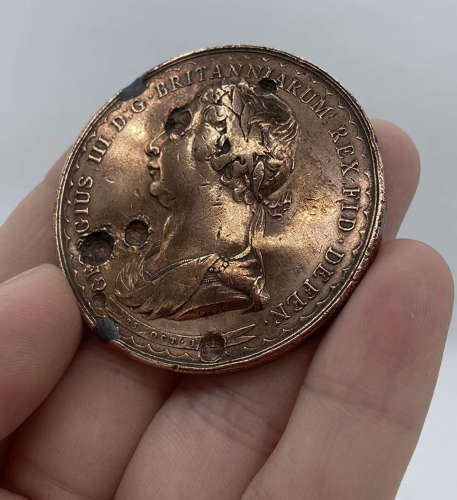 £150.00 Approx $206.33, €175.64, £150
(1 in stock)
Qty
For sale is a Rare King George III Golden Jubilee 50 Years He Reigns, Only 500 Struck.
Historical and Commemorative Medals Collection of Benjamin Weiss GEORGE III , GOLDEN JUBILEE KÜCHLER , Conrad Heinrich : England , 1810 , Bronze , 48 mm Obv : Bust of George III GEORGIUS . III . D : G . BRITANNIARUM REX . FID . DEFEN . Scroll under bust inscribed : 25 OCT . 1810 Rev : Arms of City supported by two double eagles LUSTRA DECEM COMPLEVIT . REGNAT ADHUC , REGNETQUE DIU . ( He has completed fifty years , he still reigns and may he reign long ) . Unsigned : [ by C.H. Küchler ] Mintage = 500 Ref : BHM 167/684 ; Eimer 127/1008 ; Pollard 34 ; Weiss BW682 George William Frederick , George III ( 1738-1820 ) , King of Great Britain and Ireland ( 1760-1820 ) and King of Hanover ( 1760-1820 ) , was the grandson and successor of George II . He was the third British monarch of the House of Hanover , and the first to be born in Britain and speak English as his first language . During his reign the Seven Years ' War against France was concluded , in which Britain gained New France ( now Canada ) but left Britain isolated in Europe and in serious financial difficulties . It was also during the reign of George III that Great Britain lost many of its colonies in North America in the wake of the American Revolution . These colonies would eventually become the United States . George III was also the monarch when , in 1800 , the Act of Union joined together the realms of Great Britain and Ireland to form the United Kingdom . This medal celebrates the fiftieth year of the reign of George III . It was produced at the request of Lord Radnor to celebrate the Jubilee in Salisbury . This piece , one of 500 struck in copper bronzed , is the only Küchler medal that cannot have been restruck since the dies were canceled on completion of the order ( BHM ) .
This a great piece of history, and produced in very limited numbers, but does have its defects so please see photos.
Guaranteed original or money back guaranteed. This will be sent 1st class signed for and dispatched within two to three working day’s.