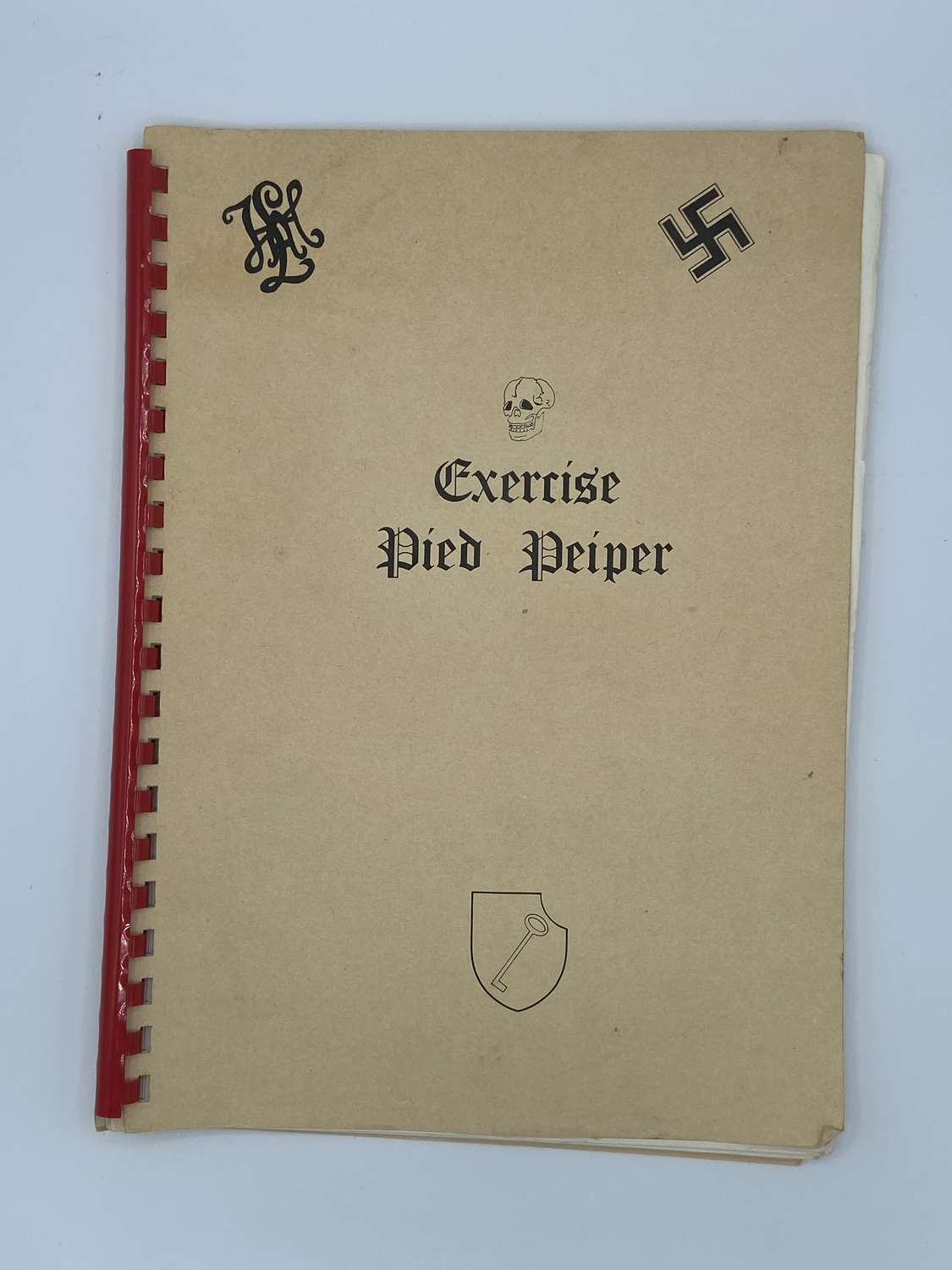 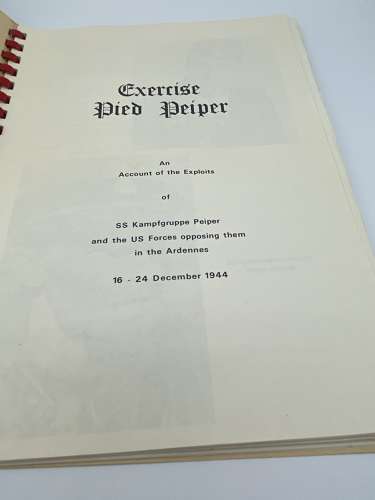 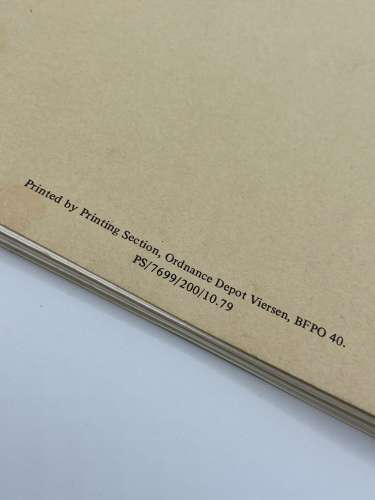 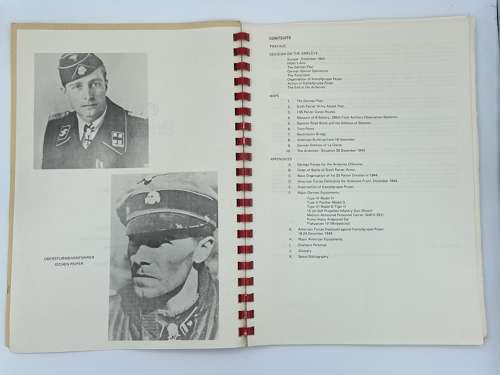 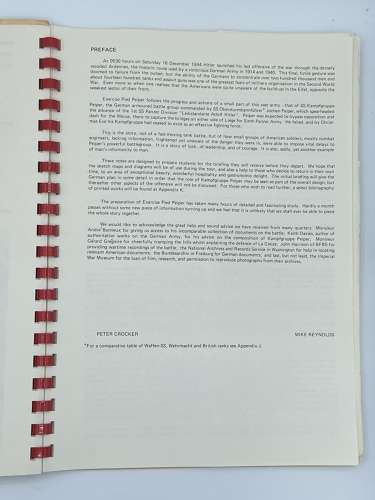 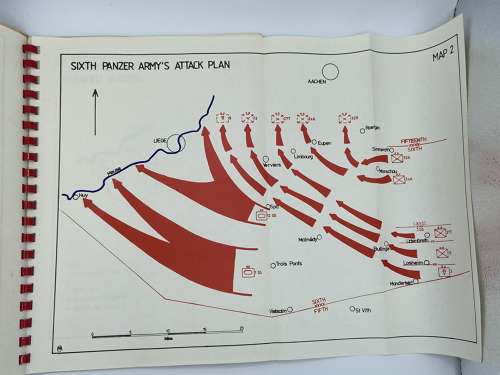 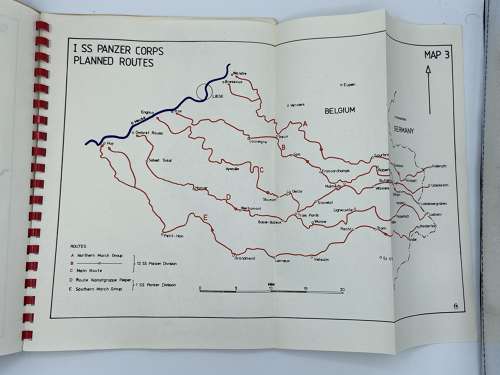 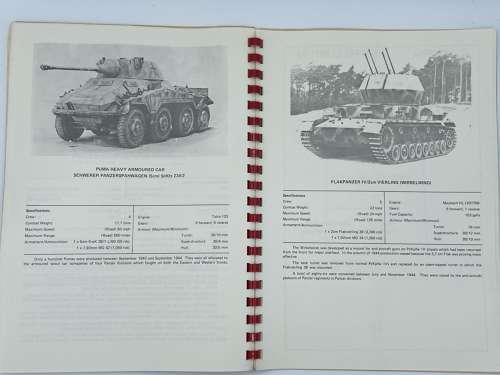 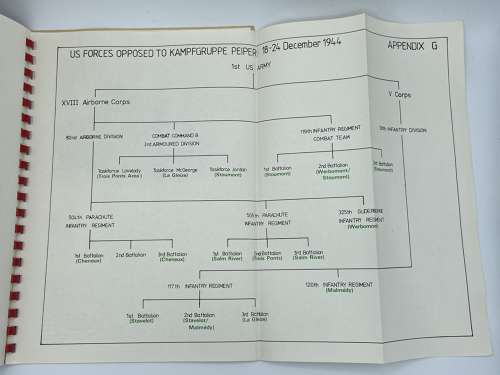 For sale is a 1979 Ordnance Depot Viersen Exercise Pied Piper Report. In good condition, been unable to research what these were made for. This report consists of photos, texts, accounts, illustrations and maps. But the preface is as follows:

PREFACE At 0530 hours on Saturday December 1944 German launched her last offensive of the war through the densely doomed to failure from the outset , but the ability of the Germans to concentrate over two hundred thousand men and wooded Ardennes , the historic route used by a victorious German Army in 1914 and 1940. This final , futile gesture was about fourteen hundred tanks and assault guns was one of the greatest feats of military organisation in the Second World War . Even more so when one realises that the Americans were quite unaware of the build - up in the Eifel , opposite the weakest sector of their front . Exercise Pied Peiper follows the progress and actions of a small part of this vast army - that of Kampfgruppe Peiper , the German armoured battle group commanded by Obersturmbannführer Jochen Peiper , which spearheaded the advance of the Panzer Division " Leibstandarte Adolf Hitler " . Peiper was expected to bypass opposition and dash for the Meuse , there to capture the bridges on either side of Liege for Sixth Panzer Army . He failed , and by Christ mas Eve his Kampfgruppe had ceased to exist as an effective fighting force . This is the story , not of a fast - moving tank battle , but of how small groups of American soldiers , mostly combat engineers , lacking information , frightened yet unaware of the danger they were in , were able to impose vital delays to Peiper's powerful battlegroup . It is a story of luck , of leadership , and of courage . It is also , sadly , yet another example of man's inhumanity to man . These notes are designed to prepare students for the briefing they will receive before they depart . We hope that the sketch maps and diagrams will be of use during the tour , and also a help to those who decide to return in their own time , to an area of exceptional beauty , wonderful hospitality and gastronomic delight . The initial briefing will give the German plan in some detail in order that the role of Kampfgruppe Peiper may be seen as part of the overall design , but thereafter other aspects of the offensive will not be discussed . For those who wish to read further , a select bibliography of printed works will be found at Appendix K. The preparation of Exercise Pied Peiper has taken many hours of detailed and fascinating study . Hardly a month passes without some new piece of information turning up and we feel that it is unlikely that we shall ever be e able to piece the whole story together We would like to acknowledge the great help sound advice we have received from many quarters : Monsieur Andre Banneux for giving us access to his incomparable collection of documents on the battle ; Keith Davies , author of authoritative works on the German Army , for his advice on the composition of Kampfgruppe Peiper ; Monsieur Gérard Gregoire for cheerfully tramping the hills whilst explaining the defence of La Gleize ; John Harrison of BFBS for providing wartime recordings of the battle ; the National Archives and Records Service in Washington for help in locating relevant American documents ; the Bundesarchiv in Freiburg for German documents and last , but not least , the Imperial War Museum for the loan of film , research , and permission to reproduce photographs from their archives . PETER CROCKER MIKE REYNOLDS * For a comparative table of Waffen, Wehrmacht and British ranks see Appendix J.

This will be sent 1st class signed for and dispatched within two to three working day’s.