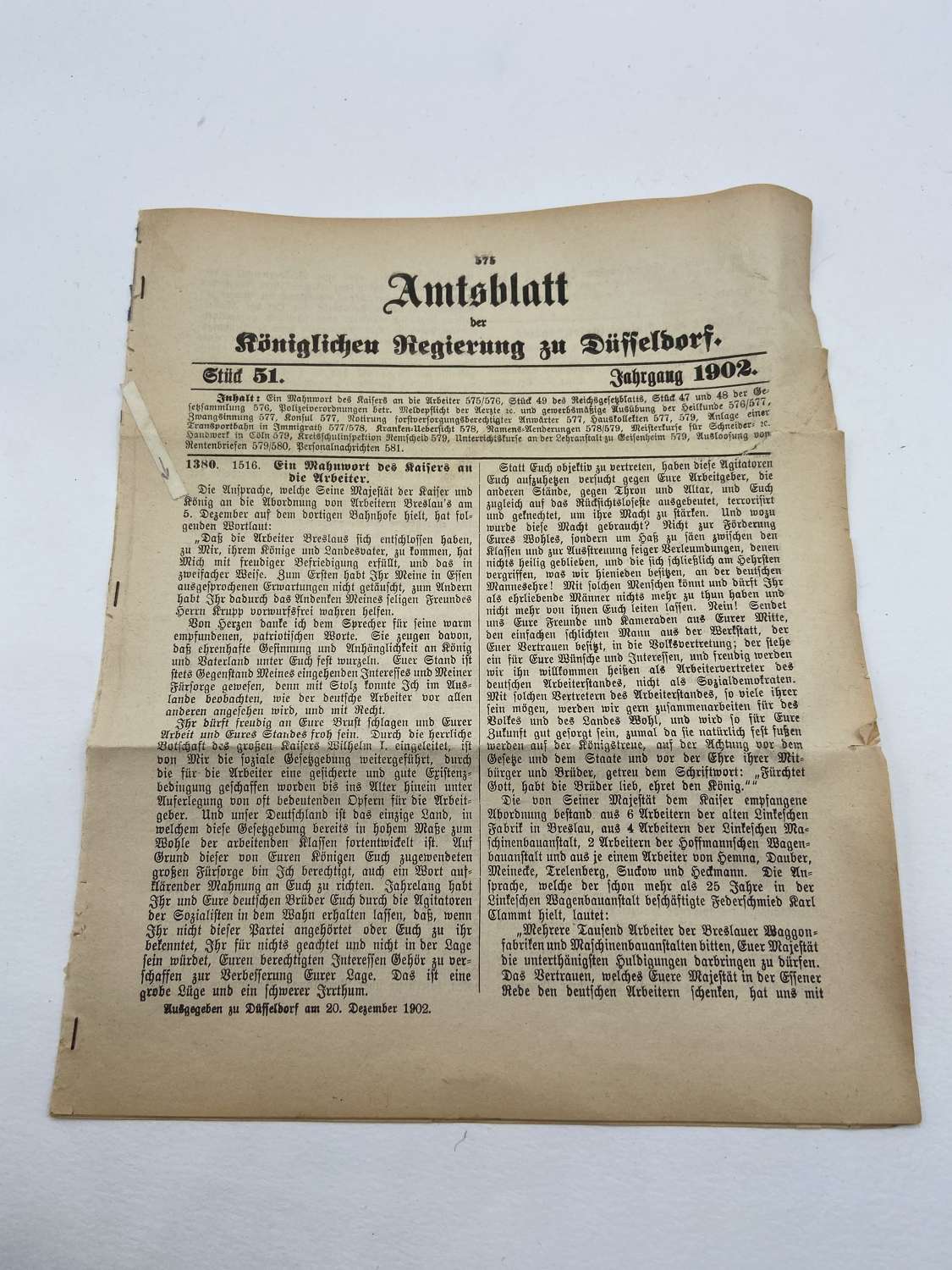 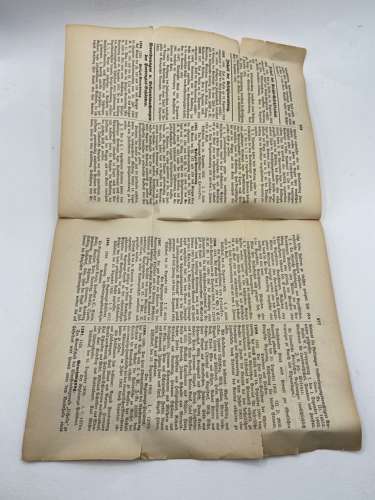 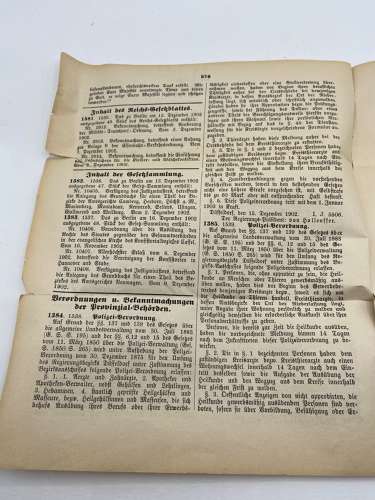 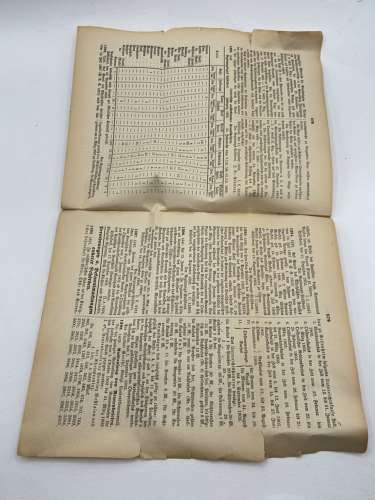 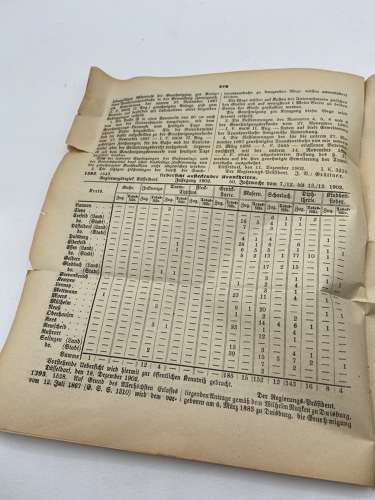 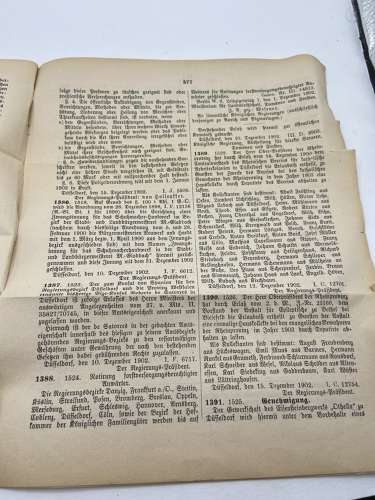 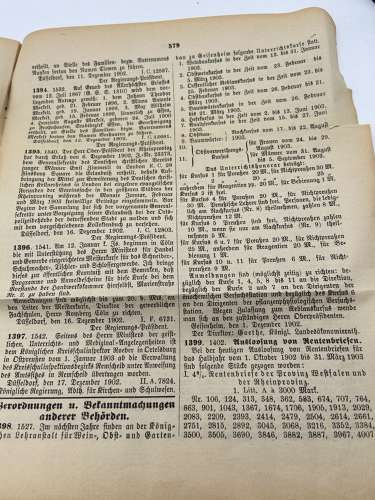 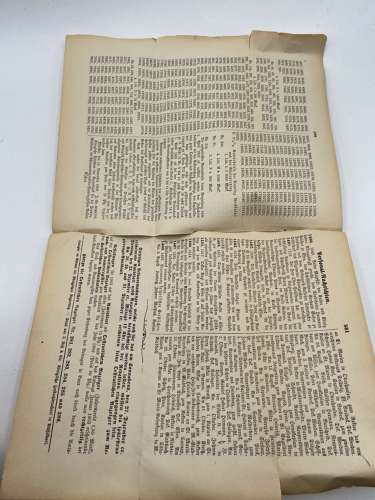 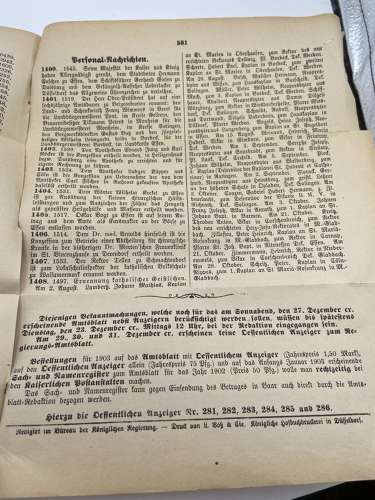 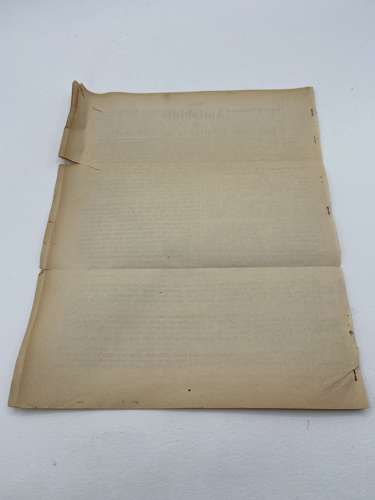 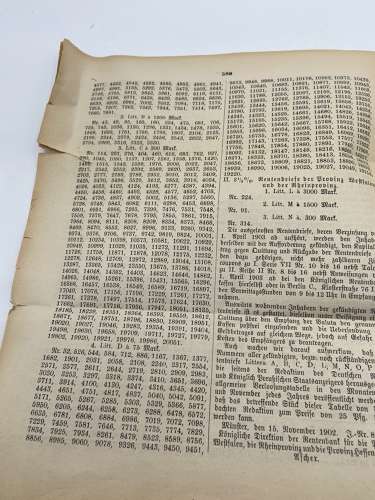 £22.00 Approx $26.99, €25.61, £22
(1 in stock)
Qty
For sale is a Boer War German Official Journal Royal Government of Dusseldorf 1902 Magazine
The introductionary title and paragraph translate from german to English as:
“575
style 51
Royal Government of Dusseldorf.
Official Journal ber
Born in 1902.
Contents: A warning from the emperor to the workers 575/576, Stued 49 of the Reichsgesetblatt, Stad 47 and 48 of the Ge jessammlung 576, police ordinances regarding the obligation to report doctors 2c.  and commercial practice of medicine 576/577, 3wangsinnung 577, Ronful 577, notification of applicants entitled to forest supply 577, household collections 577, 579, installation of a transport railway in 3mmigrath 577/578, overview of the sick 578, Ramens changes 578/579, master courses for tailors 20  Crafts in Cologne 679, District School Inspectorate Remscheid 579, Courses at the Geisenheim School 579, Ausloojung non Mentenbriefen 579/580, Personnel News 581.”
The front page goes onto stay:
“1380. 1516. A warning from the Emperor
the workers.  The speech given by His Majesty the Emperor and
König delivered to the delegation of workers from Breslau on December 5th at the station there has the following wording:
“That the workers of Breslau have decided to come to me, their king and sovereign, has filled me with joyful satisfaction, and that in two ways.  Firstly, you did not deceive the expectations I expressed in Essen, and secondly, you helped Herr Krupp to keep my blessed friend's memory without reproach.
I heartily thank the speaker for his warmly felt, patriotic words.  They bear witness to the fact that a spirit of honor and attachment to king and fatherland are firmly rooted among you.  Your status has always been the object of my close interest and my care, because I was proud to observe abroad how the German worker is regarded above all others, and rightly so.
You may happily beat your chest and be happy about your work and your status.  Initiated by the glorious message of the great Kaiser Wilhelm T., I continued the social legislation through which secure and good living conditions were created for the workers well into old age, with the imposition of often significant sacrifices on the employers.  And our Germany is the only country in which this legislation has already been developed to a large extent for the benefit of the working classes.  Due to the great care shown to you by your kings, I am entitled to address a word of vague admonition to you.  For years you and your German brethren have allowed the Socialist agitators to keep you in the delusion that unless you belonged to, or professed, this party, you would be disregarded and unable to have your legitimate interests heard  create to improve your situation.  This is a gross lie and a grave error.  Issued in Düsseldorf on December 20, 1902. Instead of representing you objectively, these agitators have tried to incite you against your employers, the other estates, against throne and altar, and at the same time have ruthlessly exploited, terrorized and enslaved you in order to strengthen their power.  And what was this power used for?  Not to promote your well-being, but to sow hatred between the classes and to spread cowardly slanders to which nothing remained sacred, and which ultimately violated the noblest thing we conquer here, the German male honor!  As honor-loving men, you can and must no longer have anything to do with such people and no longer allow yourself to be guided by them.  No!  Send us your friends and comrades from your midst, the simple, plain man from the workshop, who conquers your trust, to the people's representation;  he will stand up for your wishes and interests, and we will happily welcome him as a representative of the German working class, not as a social democrat.  With such representatives of the working class, as many as there may be, we will gladly work together for the good of the people and the country, and your future will be well taken care of, especially since they will of course be firmly based on loyalty to the king, on respect for the  Laws and the state and before the honor of your fellow citizens and brothers, true to the scripture: Fear God, love your brothers, honor the king."
The delegation received by His Majesty the Kaiser consisted of 6 workers from the old Linke factory in Breslau, 4 workers from the Linke machine construction company, 2 workers from the Hoffmann carriage construction company and one worker each from Hemna, Dauber, Meinecke, Trelenberg, Suckow and Hedmann  .  The speech given by springsmith Karl Clammt, who has been employed at the Linkesche Wagenbauanstalt for more than 25 years, reads:
Several thousand workers from the Wroclaw wagon factories and mechanical engineering establishments beg to pay Your Majesty the most humble homage.  The confidence that Your Majesty gave to the German workers in the Effen speech has us with them”
In this short journal from the German king there are a further seven pages. This would be a great piece for a boer war display, for the German soldiers! This will be sent via 1st class signed for and dispatch within two working days.