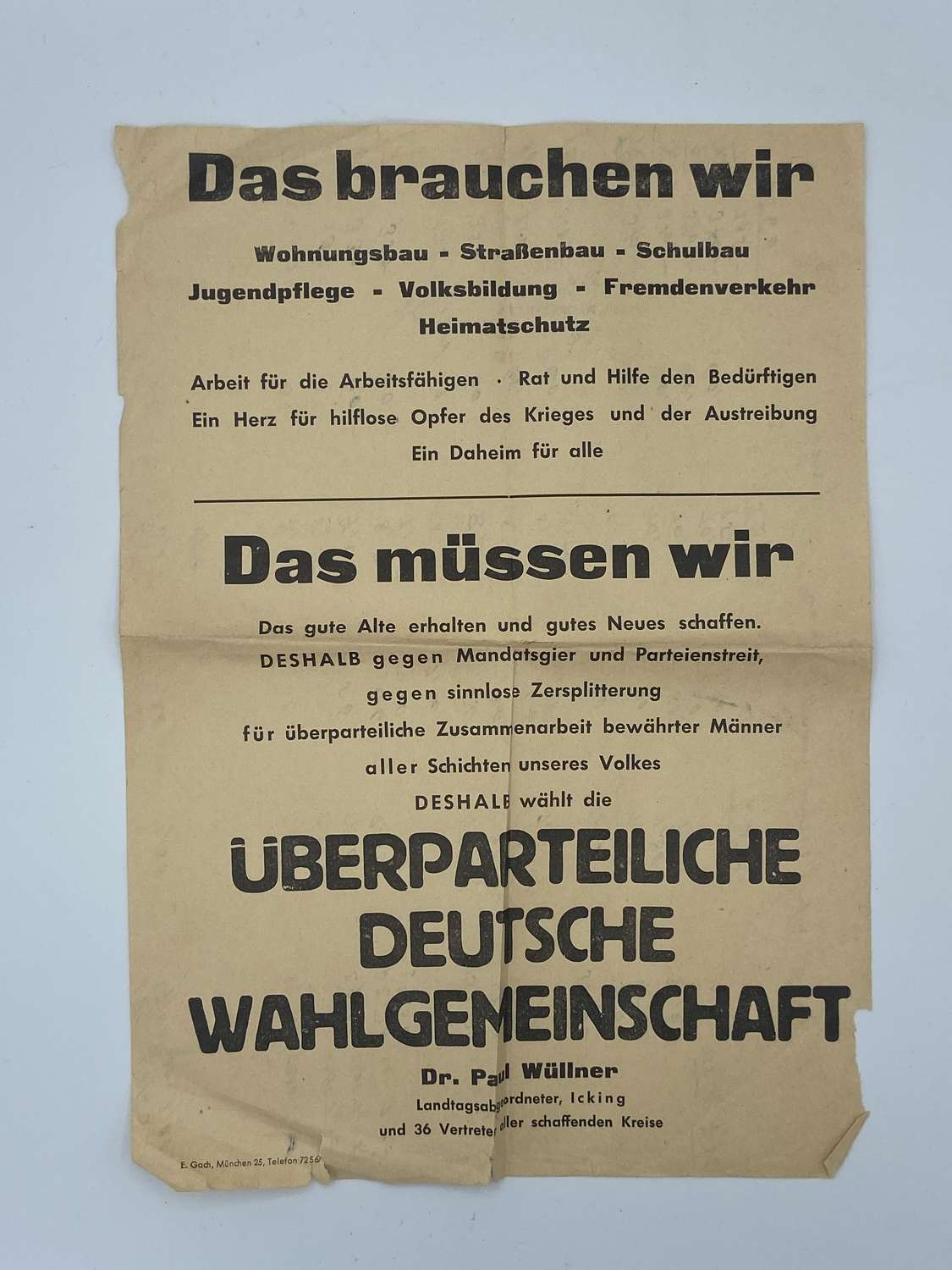 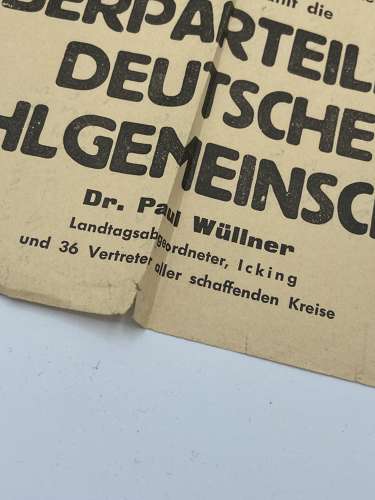 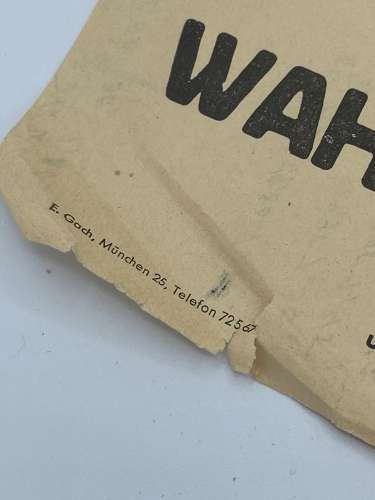 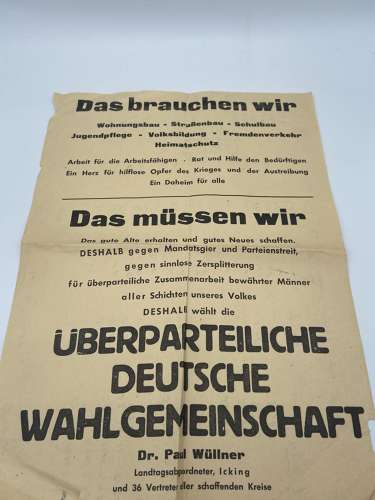 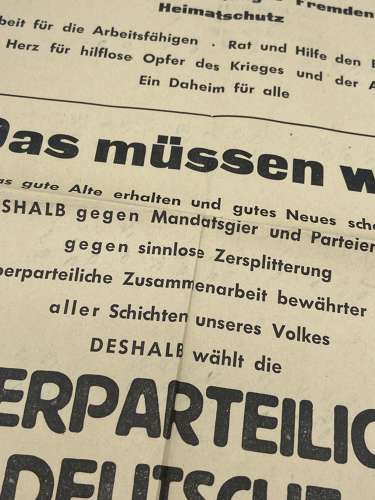 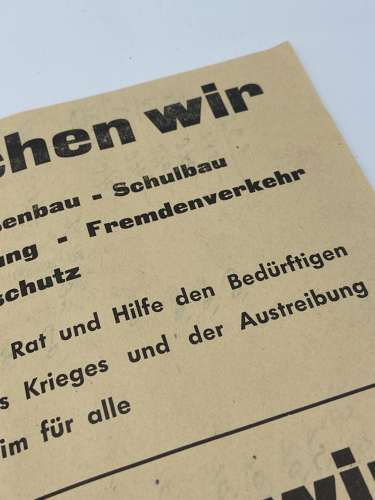 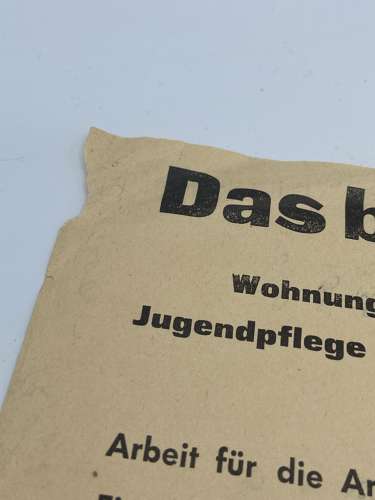 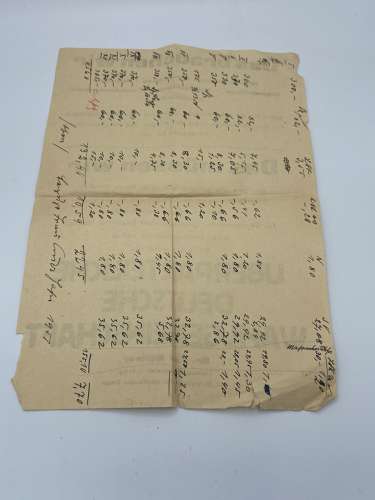 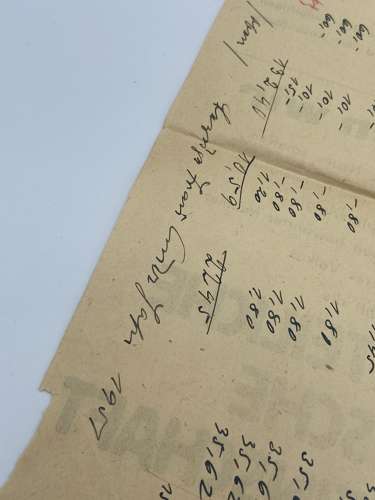 £32.00 Approx $39.9, €37.69, £32
(1 in stock)
Qty
For sale is a Early Post WW2 German Electrotical Candidate Poster For Dr Paul Wullner. Dr Paul wullner played an important part in turning Germany around and restoring its political system, its pride and transforming its cities, villages, towns and people. Some more history about his achievements and life is below the translated version of the poster. The poster translates from German to English as:
“This is what we need Housing construction - Road construction - School building Youth care - Public education Tourism Homeland security Work for the able-bodied Advice and help for the needy A heart for helpless victims of war and expulsion A home for everyone We have to keep the good old and create good new. THEREFORE against greed for mandate and party disputes, against senseless fragmentation for non-partisan cooperation of tried and tested men of all strata of our people. THEREFORE, the UNIVERSAL GERMAN ELECTORAL COMMUNITY elects Dr. Paul Wüllner Member of the State Parliament, Icking and 36 representatives of the creative circles E. Goth, Minder 25, phone 7256”
History of Dr Paul Wullner:
Dr. Paul Wüllner, FDP, Lawyer, insurance director, Upper Bavaria constituency, born in Brn and died 02.24.1986 in Munich and a Member of the state parliament: 11/27/1950 to 12/06/1962
Visited Brno and Troppau elementary school and grammar school; studied law and political science as well as economics in Prague and Vienna; received his doctorate in law from the German University of Prague in 1930. Afterwards, financial lawyer in Brno, department head and authorized signatory of Concordia Versicherung Reichenberg, finally director at Moravian Mutual Brno. Soldier in Greece, Crete, Albania and Yugoslavia. After collapse partisan captivity. Since 1948 in the Wolfratshausen district parliament, honorary state labor judge and since 1953 chairman. From 1958 stv. Chairman of the Executive Board of the Administrative vocation Cooperative in Hamburg. In Munich since the end of 1947 managing director of the employers' association of insurance companies for the federal territory. Since 1956 deputy Director of the Swiss Accident Insurance Company in Winterthur, Directorate for Germany in Munich. Familiar with economic and social policy issues since 1931 from professional and extra-occupational work. Member of the Bavarian Parliament since 1950. Member of the Upper Bavaria constituency.
(The biography is based on the own information of the former member of the state parliament. Status: Time of departure from the state parliament.)
The poster is in good condition and dates to 1946-1948. Guaranteed original or money back guaranteed. This will be sent 1st class signed for and dispatched within two to three working day’s.