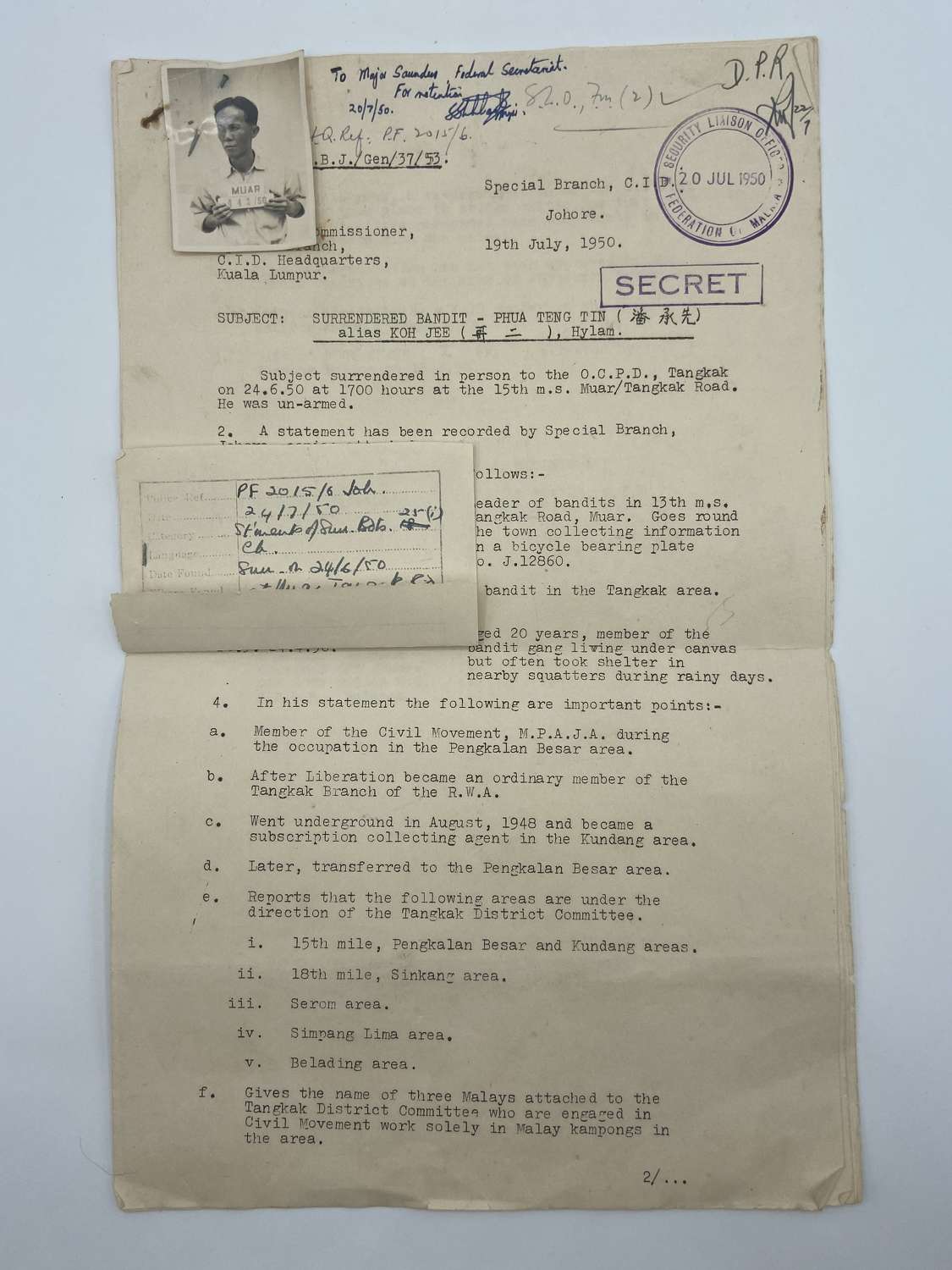 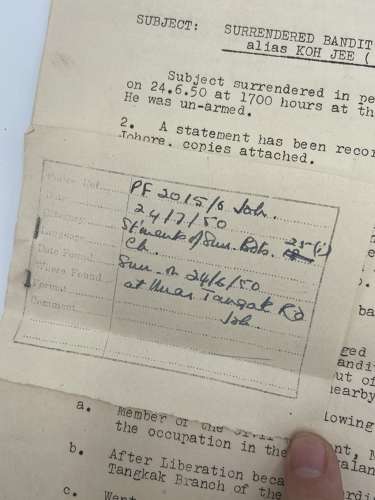 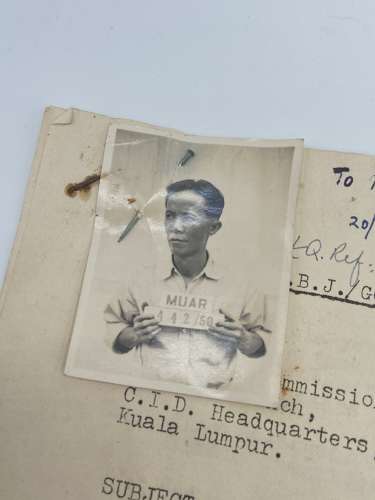 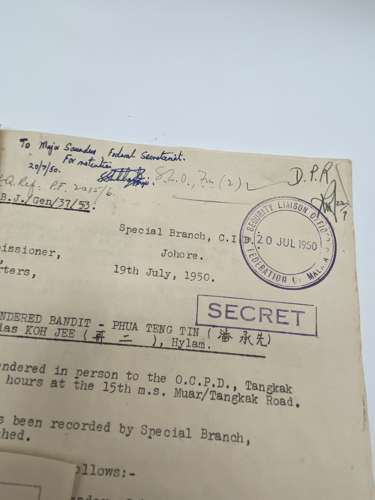 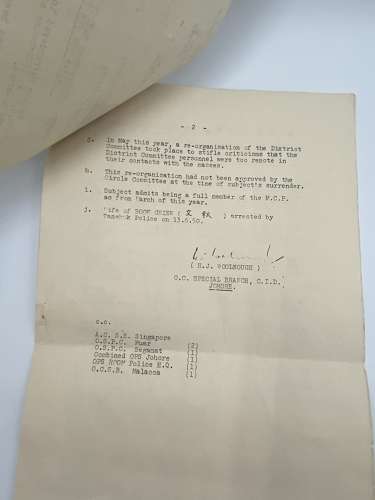 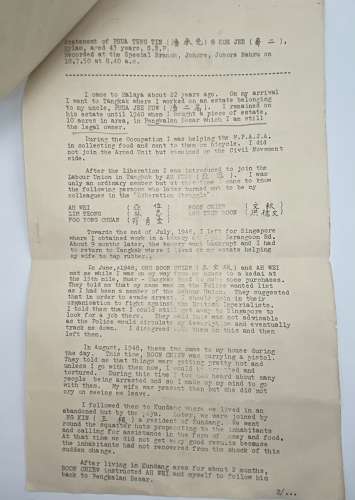 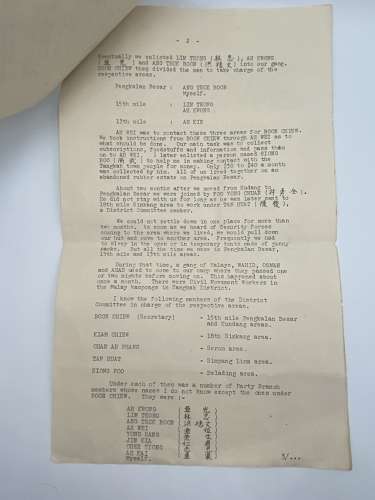 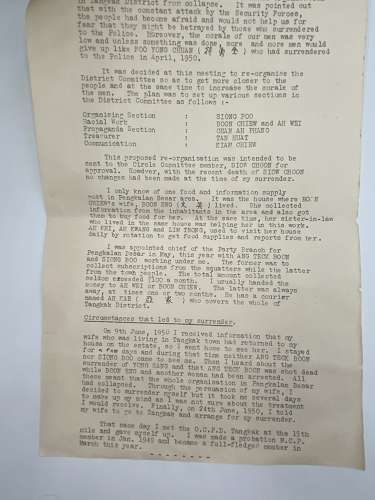 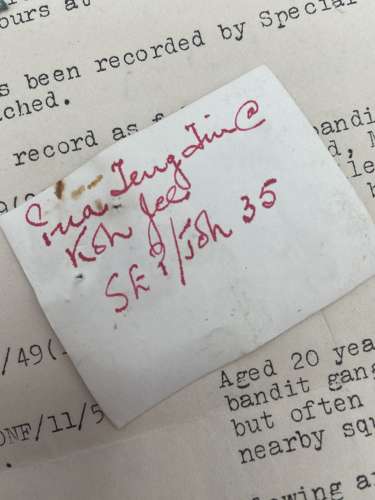 For sale is a rare Malayan Emergency 1950 dated Surrendered Bandit Liwing Gang Statement and Capture Photo. The arrest warrant/ statement is for 20 year old Liwing bandit Phau Teng Tin arrested: surrendered 24.6.19650 at 17:00 hours in person to the OCPD Tangkak. Some brief notes are the following: He was leader of the bandits who went around collecting information on a bike, he was a bandit in the Tangkak area, member of the Liwig banidits, he was also a member of the civil movement MPAJA during the occupation of Pengkalan Besar area, after liberation he became a member of the RW, he went underground in 1948 and was a subscription collector, also a member of the MCP. Below is everything typed on the paperwork below. These are guaranteed original or money back, a very rare piece of paperwork giving a detailed account of his impact during the Malayan emergency.

20 JUL 1950 Special Branch, C.ID. Joho re 19th July 1950. Ref: L in S.B.J./Gen/37/53. To assistant commissioner, special branch, CID headquarters Kuala Lumpur. Subject: SURRENDERED BANDIT PHUA TÊNG TIN ( A 2) alias KOH JEE ( - SUBJECT: ), Hylam. Subject surrendered in person to the 0.C.P.D., Tangkak on 24.6.50 at 1700 hours at the 15th m.s. Muar/Tangkak Road. He was un-armed. 2. A statement has been recorded by Special Branch, ollows:- PF 2015/6 Joh.. 24/7/50 et. eader of bandits in 13 th m,s. an gkak Road, Muar. Goes round he town coliecting information na bicycle bearing plate o. J.12860. eh.. fun n d4/6/5o. l.. bed bandit in the Tangkak area. ged 20 years, member of the vandit gang líving under canvas but often took shelter in nearby squatters during rainy days. 4. In his statement the following are important points:- Member of the Civil Movement, M.P.A.J.A. during the occupation in the Pengkalan Besar area. a. After Liberation became an ordinary member of the Tangkak Branch of the R.W.A. b. Went underground in August, 1948 and became a subscription collecting agent in the Kundang area. C. d. Later, transferred to the Pengkalan Besar area. Reports that the following areas are under the direction of the Tangkak District Committee. e. i. 15th mile, Pengkalan Besar and Kundang areas. 18th mile, Sinkang area. iii. Serom area. iv. Simpang Lima area. Belading area. v. Gives the name of three Malays attache d to the Tan gkak District Committee who are engaged in Civil Movement work solely in Malay kampongs in the area. f. 2/.

In May this year, a re-organisation of the District Committee took place to stifle criticisms that the District Committee nersonnel were too remote in their contacts with the masses. This re-organisation had not been anproved by the Circle Committee at the time of subject's surrender. h. Subject admits being a full member of the M.C.P. as from larch of this year. i. ) arrested by ife of BOOT CHIEW ( * Tangkk Police on 13.6.50. j. ( H.J. WOOLNOUGH ) 0.c. SPECIAL BRANCH, C.I.D. JOHORE. c.c. A.C. S.B. Singapore O.s.P.C. Muar O.S.P.c. Segamat Combined OPS Johore OPS ROOM Police H.Q. 0.c.s.B. Malacca.

Statement of PHUA TENG TIN ( A ) KOH JEE ( ), Hylam, ared 43 years, S.E.P. Recorded at the Speoial Branch, Johore, Johore Bahru on 18.7.50 at 8.40 a,m. I. came to Malaya about 22 years ago , I went to Tangkak where I worked on an estate belonging to my uncle, FHUA JEE KOW( = ). his estate until 1940 when I boucht a piece of estate, 10 acres in area, in Pengkalan Besar which I am still the legal owner. On my arrival I remained on During the Oc cupation I was helping the M.P.A.J.A. in collecting food and sent to them on bicycle. I did not join the Arned Unit but rema ined on the Civil Movement side. After the Liberation I was introduced to join the Labour Union in Tangkale by AH KUAN ( L ). only an ordinary member but at thttime I came to know the following persons who later turned out to be my colleagues in the "Liberation Struggle". I was AH WEI LIM TEONG F00 YONG CHUAN POON CHIEW Towards the end of July, 1946, I left for Singapore where I obtained work in a bake ry E About 9 months later, the bakery went bankrunt and I had to return to Tangkak whe re I lived on my estate helping my wife to tap rubber.. Serangoon Rd. In June , x1948, ONG BOON CHIEW (E AK) and AH WEI met me while I was on my way from my house to a kedai at the 15th mile, Muar - Tangkak Road to malke some purchases. They told me that my name was on the Police wanted list as Í had been a member of the Lebour Union. that in order to evade arrest, I should join in the ir organisation to fight a gainst the British Impne rialists. I told them that I could still ge t away to Singapore to look for a job there. as the Police would circulate my descript on and eventually track me down. left them. They suggested They said this was not ad visable I dissgreed them on this and then In August, 1948, these two came to my house during This time, BOON CHIEW was carrying a pistol. the day. They told me that things were getting pretty hot and unless I go with them now, I would t-rr ed and tortured. neople being arrested and so I made up my mind to go with them. cry on seeing me leave. During this time I too tau heard about many My wife was present then but she did not I followed them to Kundang where we lived in an Later, we were joined by abandoned hut by the e ya. NG KIN ( E ÁR ) a resident of Kundang. We went round the squatter huts proparating to the inhabitants and calling for assistance in the form of oney and food. At that time we did not get ve ry good resuits because the inhabitants had not recovered from the shock of this sudden change. After living in Kundang area for about 2 months, BOON CHIẾW instructed AH WEI and myself to follow him back to Pengkalan Besar. 2/...

2 - Eventually we enlisted LIM TEONG (* ), AH KWONG *) and ANG TECK BOON (A ) Into our gang. BOON CHIEW then divided the men to take charge of the respective areas. Pengkalan Besar : ANG TECK BOON Myself. 15 th mile LIM TEONG AH KWONG 13th mile AH KIN AH WEI was to contact the se three areas for BOON CH IEW. We took instructions from BOON CHIEW through AH WEI as to what should be done. subscriptions, foodstuffs and information and rass them on to AH WEI, BO0 ( A ) to help me in making contact with the Tangkak town people for money. Only 30 to $40 a month was collected by him. All of us lived to ge ther on an abandoned rubber estate on Pengkalan Besar. Our main task was to collect later enlisted a nerson named SI ONG About two months after we moved from Kudang to Pengkalan Besar we were joined by FOO YONG CHUAN (4 A). He did not stay with us for long as he was later sent to 18th mile Sinkang area to work under TAN HUAT ( PR ), a District Committee member. We could not settle down in one place for more than two months. As soon as we heard of Security Forces coming to the area where we lived, we would pull down our hut and move to another area. to sleep in the open or in temporary tents Tade of gunny sacks. 15th mile and 13th mile areas. Frequently we had But all the time we were in Pengkalan Besar, During that time, a gang of lalays, WAHID, OSMAN and AHAD us ed to come to our camp where they passed one or two nights before moving on. This hapņened about once a month. the Malay kampongs in Tangkak District. The re were Civil Movement Worke rs in I know the following members of the District Committee in charge of the respective areas. BOON CHIEW (Secretary) - 15th mile Pengkalan Besar and Kundang areas. KIAM CHIEW - 18th Sinkang area. CHAN AH PHIA NG - Serom area. TAN HUAT Simpang Lima area. SIONG POO Belading area. Under each of them was a number of Party Branch members whose names I do not know except the anes under BOON CHIEW. They were :- AH KWONG LIM TEONG ANG TECK BOON AH WEI YONG SANG JIN KIA CHEE TIONG All KAI Myself. 3/...

In may this year, a meeting was held among members of the district Committee at the camp in Pengkalan Besar to discuss means of saving the civil movement organisation in Tangkak district from collapse. It was pointed out that with the constant attack by the Security Forces, the pe ople had become af raid and would not help us for fear that they might be betrayed by those who sur rend e red to the Police. Moreover, the morale of our men was very low and unless something was done , more and more men would give up like FOO YONG CHUAN ( A ) who had surrendered to the Police in April, 1950. It was decided at this meeting to re-organise the District Committee so as to get more closer to the pe ople and at the same time to increase the morale of the men. the District Committee as follOWS :- The plan was to set up various sections in Organising Section Racial Work Propaganda Section Treasurer Communication SIONG POO BOON CHIEW and AH WET CHAN AH PHIANG TAN HUAT KIAM CHIEW : This proposed re-organi sation was intended to be sent to the Circle Committee member, SIOW CHOON for anproval. no changes had been made at the time of my surrender. Howdver, with the recent death of SIOW CHOON I only know of one food and info rmation supply It was the house whe re BOCN She collected nost in Pengkalan Besar area. CHIEW's wife, BOON ENG (* # ) lived. inf ormation from the inhabitants in the area and also got them to buy food for her. who lived in the same house was helping her in this Work. AH VEI, AH KWANG and LIM TEONG, used to visit her house daily by ro tation to get food supplies and reports from her. At the same time, her sister-in-law I was appointed chief of the Party Branch for Pengkalan Pesar in May, this year with ANG TECK BOON and SIONG BO0 working under me collect subscriptions from the squatters while the latter from the t owh neople. seldom exceeded tio0 a month. money to AH WEI or BOON CHIEW. away, at named AH KAE ( Tangkak District. The former was to The to tal amount colle cted I usually handed the The latter was always He has a courier *) who covers the whole of times one or two months. Circumstances that led to my surrender. 1950 I received information that my wife who was living in Tangkak town had returned to my house on the estate, so I went home to see her. I staye d for a faw days and during that time neither ANG TECK BOON Then I heard about the On 9th June nor SIONG BO0 came to see me. surrender of YONG SANG and thet ANG TECY BOON was shot dead while BOON ENG and another woman had be en arrested. these meant that the whole organisation in Pengkalan Besar All had collapsed. Through the ne rsuasion of my wife, I decided to surrender myself but it took me several days to make up my mind as I was not sure about the treatment I would receive. Finally, on 24th June, 1950, I told my wife to go to Tangkak and arrange for my surrender. That same day I met the 0.C.P.D. Tan gkak at the 15 th nile and gave myself up. I was made a probation M.C.P. member in Jan. 1949 and became a full-fledged member in March this year.

This will be sent special delivery and dispatched within two to three working day’s.