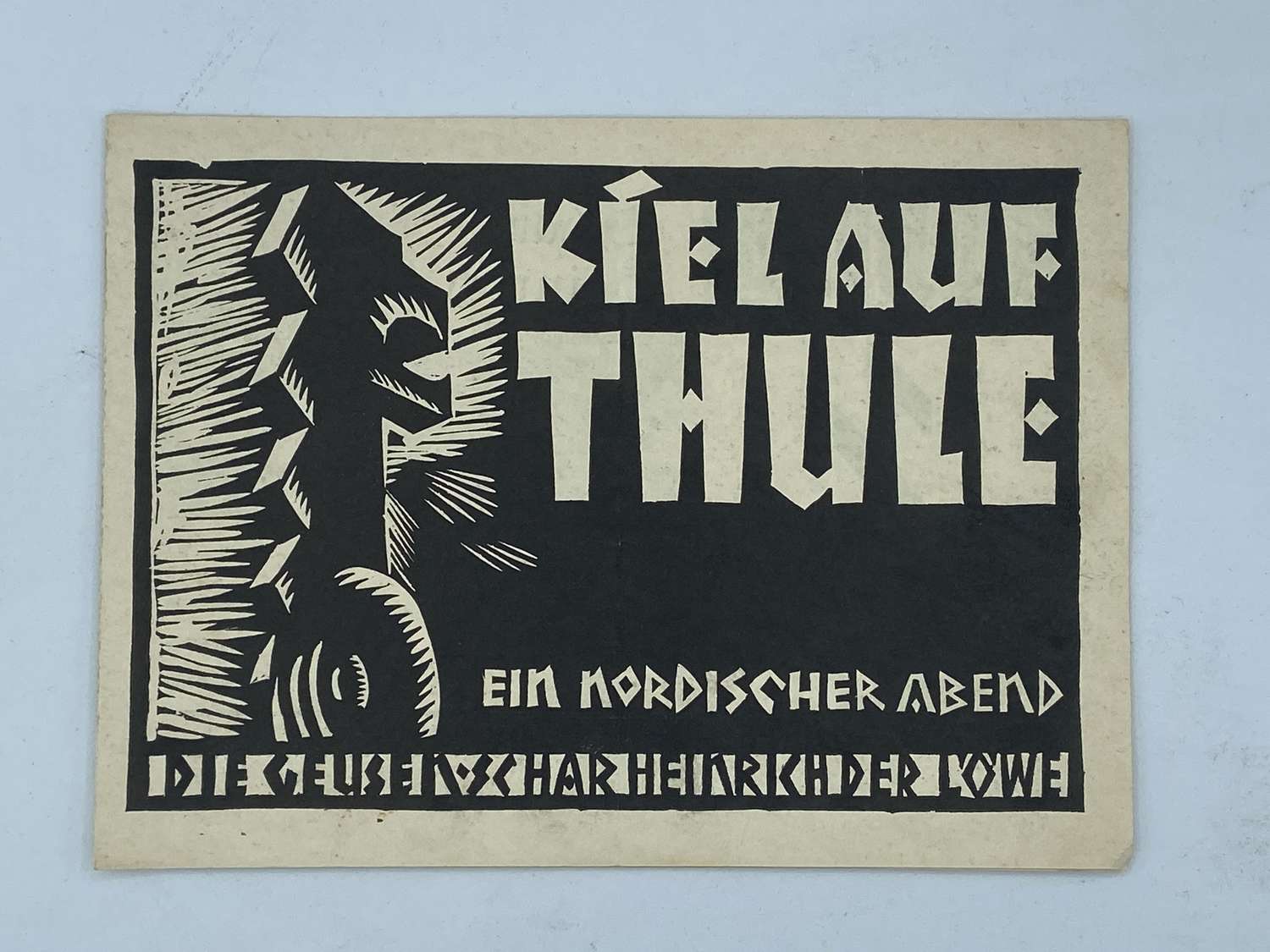 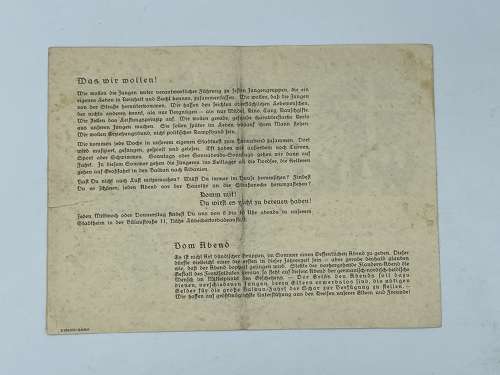 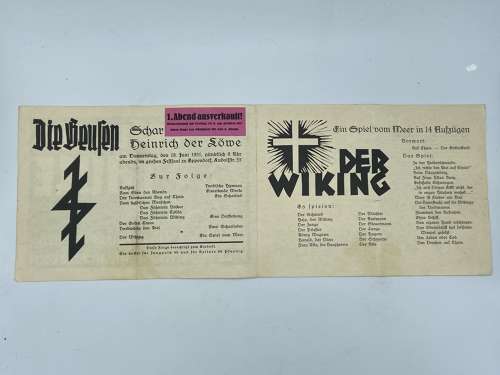 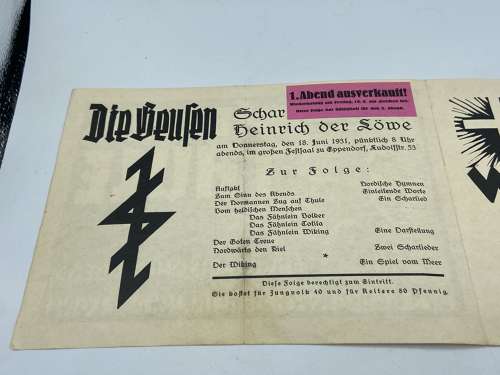 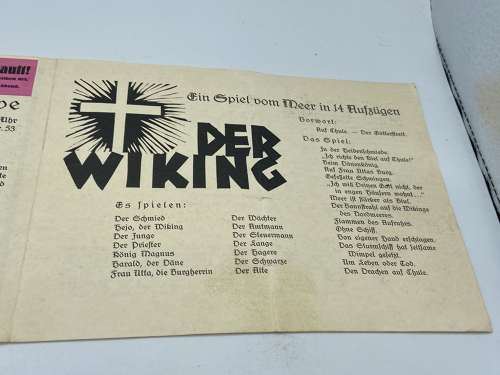 For sale is a rare Early 1930s (1931 dated) German Nordic Hitler Youth Advertisement For a Nordic Evening. This little booklet is from the small city Kiel in Germany, where they talk about the importance of being pure and Nordic. This rare piece and is in good condition (small rip on back page please see photos no bigger than 5mm). The strong aesthetics really are gripping and it’s very interesting to see how all German propaganda is based of the Nordic and Italian traditional historic culture. The leaflet also talks about two school/ Hitler Youth group trips one to Flanders to see what soldiers in ww1 had been up against and one trip to the balkans. A rough translation is below:

die beusen sold out 1st evening! Repetition on Friday, June 19 at the glue site. Schar Heinrich der Söwe This episode is valid for the 2nd evening, Thursday, June 18, 1931, punctually at 8 o'clock in the evening, in the large Feſtſaal in Eppendorf, LudolHftr. 53 For fo (ge: Nordic hymns Introductory words A charity song Prelude to the meaning of the evening The Normans Train on Thule Bom heroic people The Bolker flag The Totila flag The Wiking flag A representation of the Goths Loyalty Northward the Kiel Two scarlet songs The Viking A game from Meer This episode entitles you to the Gintrift, it costs 40 pfennigs for young people and 80 pfennigs for older people.

A game from the sea in 14 hooves THE IKINE Borwort: Auf Thule. - The divine battle. The game: In the heathen forge. "I will direct the keel on Thule!" By the Danish king. On Frau Utta's castle. Filled wings. "I do not want your God, who lives in narrow houses ..." The sea is stronger than Bluf. The ban ray on the Vikings of the North Sea. Flames of Turmoil. Without a ship. Don slain himself. The storm ship has set Jeltſame pennants. About seben or death. The play: The blacksmith Hejo, the Viking The boy The priest King Magnus Harald, the Dane Frau Utta, the castle mistress The guardian The bailiff The helmsman The song The Hagere The Black The old man The dragon on Thule.

we want the boys to collapse under responsible leadership into permanent groups of boys who know a life of their own in purity and breeding. we want a boy to come down from the street. we hate the light, superficial living person who knows nothing but mountain enjoyment as only madel, cinema, lance, drugs. we set up the management principle. we want to make healthy guys with strong characters out of our youngsters. later in life they drank completely to their husbands. we want to be an educational association, not a political fighting association. There is mockery, flogging, playing and playing. Often we also have gymnastics, sports or swimming. Then on Sundays or Saturdays-Sundays we go on a journey. This summer the younger ones are going to camp on the North Sea, the older ones are going on a big trip to the Balkans to Albania. Aren't you liable to take part too? Do you always want to work out at home? Do you think it's nicer to look around on the street corner outside your front door every evening? Come along! You do not have to regret it! Every Wednesday or Thursday you can find us from 6 a.m. to 10 p.m. in our Štadtheim at Bülaufstraße 11, near the Sübeckertorbadeanftalt.

Bom evening It is not the kind of group to have a public evening in the summer. This might be one of the first at this time of year - but that's why we believe that the evening will be twice as successful. If the previous Flanders evening put out the contents of the front soldier, Jo stands on this evening the Germanic = nordi heldch-heldiche human being in the center of attention. The & rlös. the evening is intended to provide various boys, whose parents are unemployed, with the necessary funds for the large Balkan trip of the crowd. We hope for the greatest possible support from our parents and friends! E Volsch “