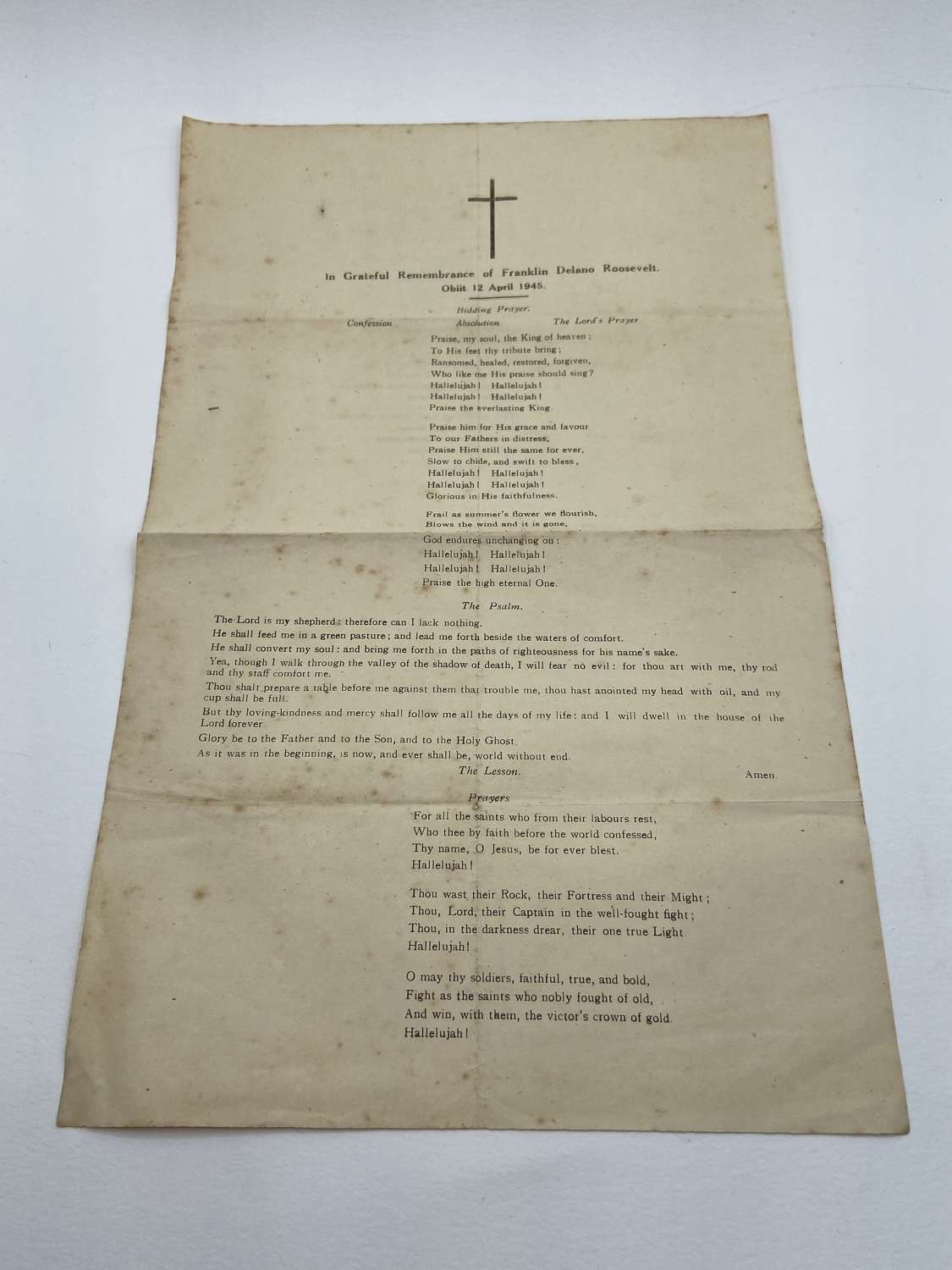 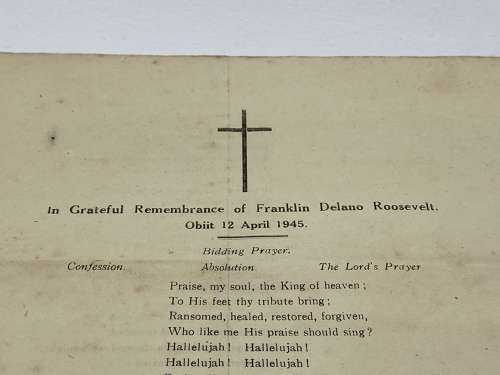 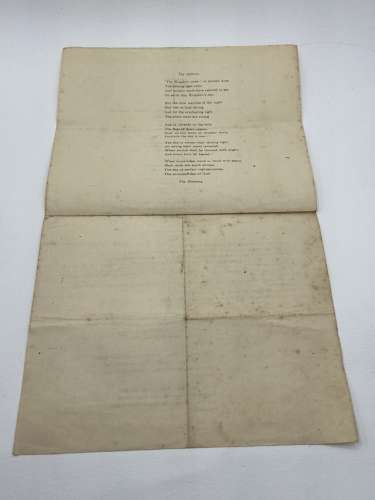 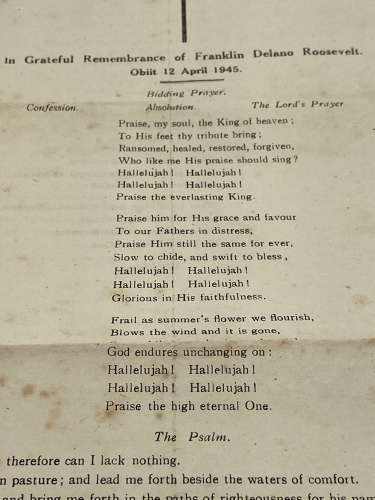 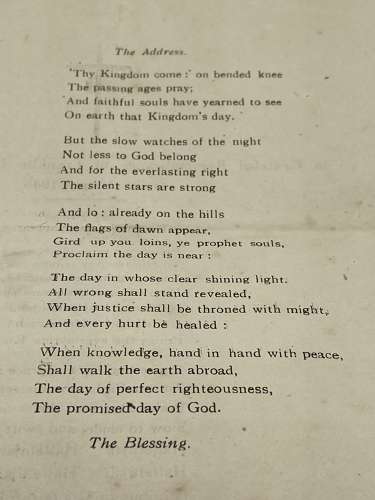 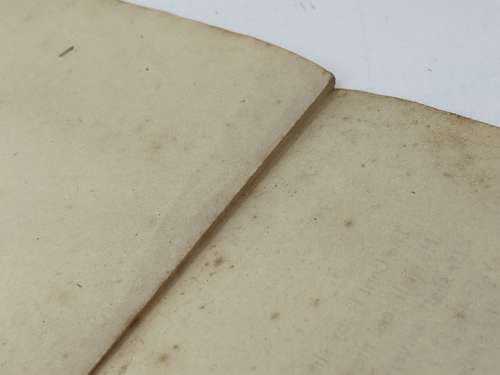 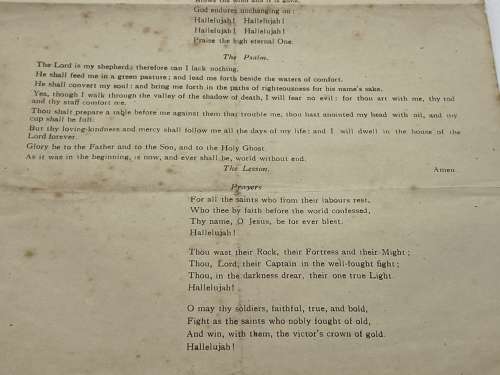 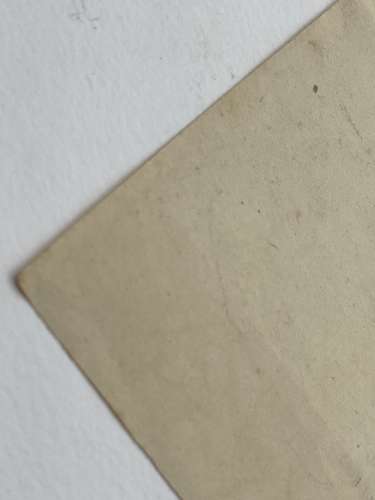 Headed with a black slim silhouette of a cross.

Praise, my soul, the King of heaven

To His feet thy nate bring: Mansomed, healed, restored, forgiven,

Praise him for His grace and favour

To our Fathers in distress,

Prsian Him still the same for ever.

Slow to chide, and swift to bless,

Glorious in His faithfulness,

Frail as summer's flower we flourish, Blows the wind and it is gone,

Praise the high eternal One.

The Lord is my shepherd: therefore can I lack nothing. He shall feed me in a green pasture; and lead me forth beside the waters of comfort.

He shall convert my soul: and bring me forth in the paths of righteousness for his name's sake.

Yea, though I walk through the valley of the shadow of death, I will fear no evil: for thou art with me, thy tod

and thy staff comfort me. Thou shalt prepare a table before me against them that trouble me, thou hast anointed my head with oil, and my cup shall be full

Glory be to the Father and to the Son, and to the Holy Ghost: As it was in the beginning, is now, and ever shall be, world without

For all the saints who from their labours rest,

Prayers Who thee by faith before the world confessed, Thy name, O Jesus, be for ever blest. Hallelujah!

Thou wast, their Rock, their Fortress and their Might; Thou, Lord, their Captain in the well-fought fight; Thou, in the darkness drear, their one true Light. Hallelujah!

O may thy soldiers, faithful, true, and bold, Fight as the saints who nobly fought of old, And win, with them, the victor's crown of gold Hallelujah!

'Thy Kingdom come : on bended knee The passing ages pray; And faithful souls have yearned to see On earth that Kingdom's day.

And lo: already on the hills

The flags of dawn appear, Gird up you loins, ye prophet souls, Proclaim the day is near :

The day in whose clear shining light. All wrong shall stand revealed, When justice shall be throned with might, And every hurt bè healed :

When knowledge, hand in hand with peace, Shall walk the earth abroad, The day of perfect righteousness, The promised day of God.

The crowd kept their stare on the guest of honor, as he was brought into the Rose Garden. He had journeyed a thousand miles by train to get there. The moment had been anticipated for three days – dreaded by some for far longer.

The honored guest was Franklin Delano Roosevelt, President of the United States. He had returned home to Springwood, his estate in Hyde Park, New York, to be laid to rest. The large crowd of mourners and military personnel gathered around him that morning, filled the space up to the hemlock hedge that surrounded the garden.

It was Sunday, April 15, 1945. Attorney General Francis Biddle had described the day as clear and cold.

The Reverend George W. Anthony of St. James Church, received the remains of President Roosevelt, and after a brief service lasting less than 20 minutes, the President was committed to the earth.

The process of burying FDR took four days, beginning with his death on April 12th. The massive ceremony that transpired was a logistical feat at the time, incorporating thousands of participants, across seven states and the District of Columbia.

FDR played a role in that planning. He had made many of his wishes known years before his death, including his desire to be interred in his mother’s rose garden at Springwood. In 1937, he had created a document describing his wishes for the services and burial. The document was not located in time for the funeral in 1945, but some of his wishes however, were carried out – including the use of a simple white marble monument that would eventually mark his grave.

What Roosevelt did not plan for, was the impact his death would have in elevating the status of a Presidential funeral, and ushered in the modern period of those ceremonies.

As the strength and power of the United States grew over the twelve years of his Presidency, so too did the importance of the office FDR held. By the time of his death, Roosevelt had become the leader of a global superpower, and still more, the President was now the leader of the free world. His departure was a stunning turn in world events; his funeral – a moment in which the whole world now observed.

Before Franklin D. Roosevelt’s death, funerals for many Presidents were private affairs. The tradition began with George Washington, who preferred a simple service, and did not want the pomp and ceremony that would surround a funeral of state for him. There were notable exceptions. The funerals for Presidents William Henry Harrison, Zachary Taylor, Abraham Lincoln, James Garfield, William McKinley, and Warren Harding were state funerals for a death in office.

Lincoln’s funeral was the first to truly resemble what we know of today as a national event. Ceremonies took place in Washington, and included lying in state at the US Capital, an element that would be incorporated in future Presidential funerals. Lincoln’s body was transported by train through seven states, with stops in major cities such as Philadelphia, New York, and Chicago, on the way to burial in Springfield, Illinois.

The Lincoln funeral occupies history as perhaps the most incredible display of national mourning the United States has ever bestowed on a single person, or President. It would stand out for decades in its size, scope, and symbolism. While Presidential funerals would return to greater simplicity, Lincoln’s funeral changed the way many Americans mourned the loss of their President. Because of Lincoln, the nation had become more federalized, and consequently, the Presidency had grown in stature. The death of a President came to mean more to the nation than it had before.

By April 1945, the United States, having already dealt with the strains of economic depression and a global war lasting several years, was not prepared to part with its long-serving leader. Despite the outward signs of failing health, the shock was no less stunning. His death on April 12th, set in motion a period of national mourning that had not been seen in such magnitude since Lincoln.

Like Lincoln, FDR was a controversial figure in his time. The American people however, understood in that moment, as they did exactly 80 years earlier, that their President had led them through unusually difficult times. The outpouring of grief and respect, from most quarters, transcended personal differences, and provided the motivation for the poignant scenes of mourning that would follow.

Death came quickly for Roosevelt. Resting in Warm Springs, Georgia, at his retreat known fondly as the Little White House, he was struck by a cerebral hemorrhage shortly after 1:00pm – at 3:35pm he died.

Immediately, as word of his death reached Eleanor Roosevelt, Vice President Truman, and the rest of the world, thousands of individual Americans, including US military personnel, railroad employees, and funeral directors, began their role in safely guiding the body of the President home.

The next morning, April 13, his coffin was taken at first by hearse past Georgia Hall, where he bid a final goodbye to the patients of Warm Springs’ polio rehabilitation center. Most were children – children who did not know of a time without this man as President of the United States.

The casket was then placed onto the Presidential Train, now converted for the purpose of bringing the President to his final resting place. On board the train, was First Lady Eleanor Roosevelt, who had flown the night before to Warm Springs, from Washington, to accompany her husband’s body on the journey home.

After arrival at Union Station, Washington, D.C., on April 14th, the President’s coffin was brought by caisson, in a military parade on Constitution Avenue, to lie in repose in the East Room of the White House. Over 500,000 people gathered along the route, in yet another unforgettable display of reverence for the 32nd President. After a private service, the coffin was returned to Union Station.

FDR did not wish to lie in state at the US Capital, and it was decided to remove many aspects of a state funeral in the atmosphere of the nation at war. With so many men and women overseas, and so many families sacrificing at home, formalities seemed inappropriate.

Later that evening, the train bearing the President, began its overnight journey to Hyde Park, for burial services. Onboard now were family, friends, government officials and staff, as well as President Truman. A second train carried among others, members of the US House and Senate, diplomats, and journalists.

By 9:00am, April 15, the trains had arrived in Hyde Park – the last leg of the journey was made over tracks which ran along the Hudson River, just below the Roosevelt property. The President’s coffin was lowered onto a temporary platform constructed the previous day for this moment. At 10:00am the coffin was removed from the train, and placed in a US Army hearse, which brought the coffin to the edge of a meadow below the President’s home.

In the meadow were gathered a battalion of cadets from the US Military Academy, as well as the Corps of Cadets’ Color Guard, and the Academy’s Band. The casket was transferred to the Academy’s funeral caisson, brought for the occasion.

Among the military honors paid to the President that morning, was a flyover of US Army Air Forces P-47s. Author Robert Klara described the moment in his book FDR’s Funeral Train:

…with the sounds of warplanes and artillery fire splitting the air, upstate New York sounded exactly like the battle zones of Europe and the Pacific.

Then after a short service by the Reverend George W. Anthony of St. James Church, FDR was lowered into the ground. An honor guard of cadets fired their salute over the grave. As they did, Fala, the President’s beloved Scottie dog, barked after each volley, “an unconscious salute to his master,” wrote Margaret Suckley, the President’s cousin. FDR was gone.

When FDR died, the outpouring of grief came from all corners of the globe. To British Prime Minister, Winston Churchill, news of Roosevelt’s death came as a “physical blow.” Joseph Stalin was deeply concerned to learn of his passing, even inquiring if the death was suspicious. Newspapers and radio broadcasts around the world broke the news of the death. In the allied nations, public displays of remembrance were difficult with the world still largely a battlefield; nevertheless, there were demonstrations in his honor. Churchill’s official address to the House of Commons on April 17th, may remain one of the best remembered:

“For us, it remains only to say that in Franklin Roosevelt there died the greatest American friend we have ever known, and the greatest champion of freedom who has ever brought help and comfort from the New World to the Old.”

His passing was the first time that the death of a US President had such far-reaching, global implications. With the United Nations set to begin its mission in just days, and a post-war peace in the planning with allies and rivals alike, it was a moment felt by the whole world.

This is in great condition, however over the years it’s been stored folded (so creases in the paper can be seen). This will be sent via Royal Mail 1st class signed for and dispatched within two working days.