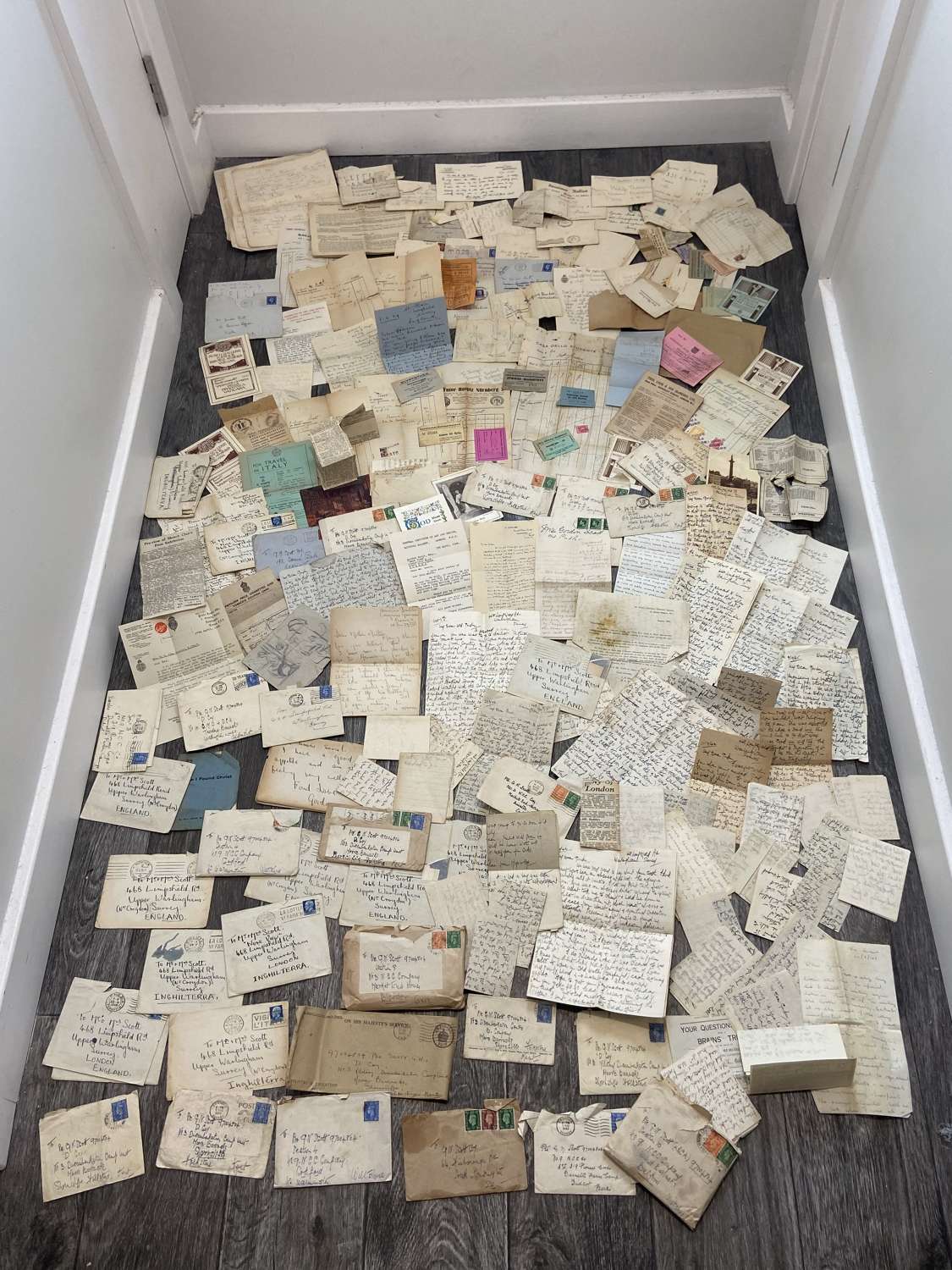 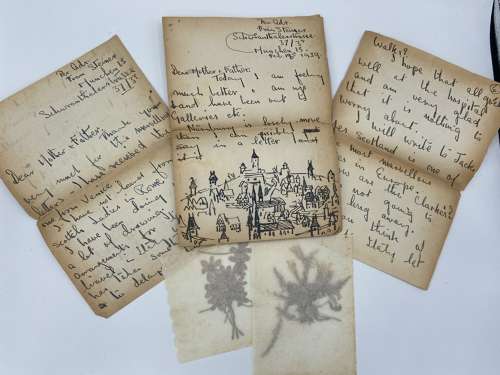 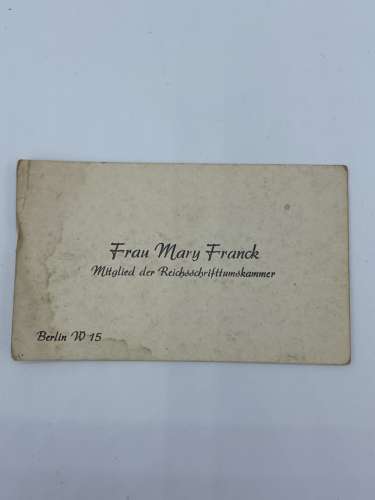 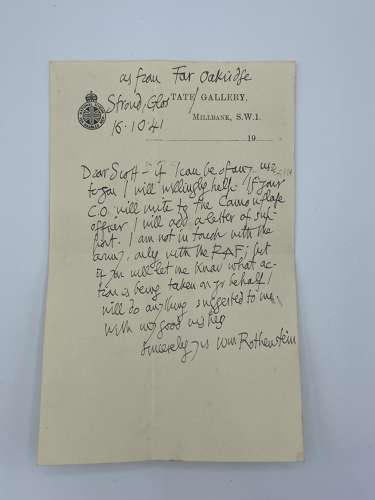 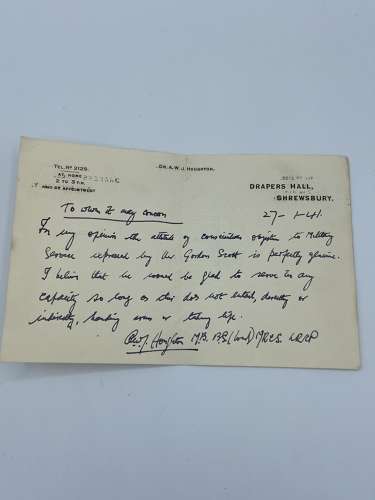 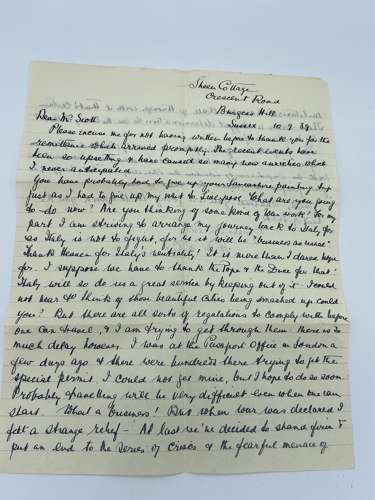 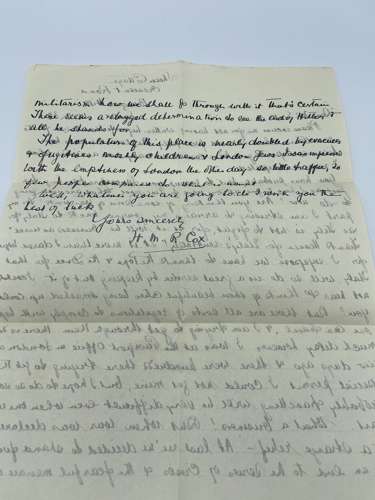 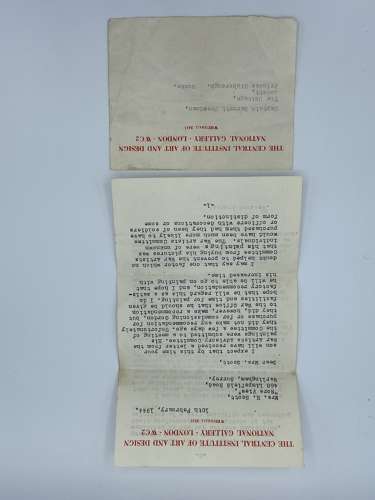 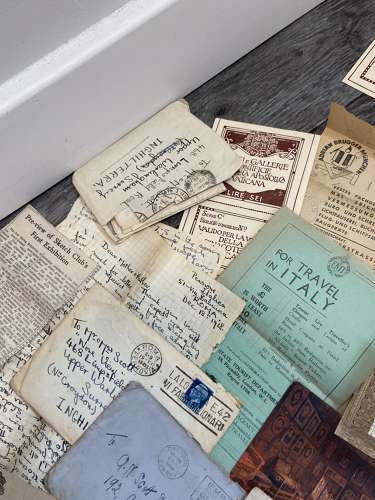 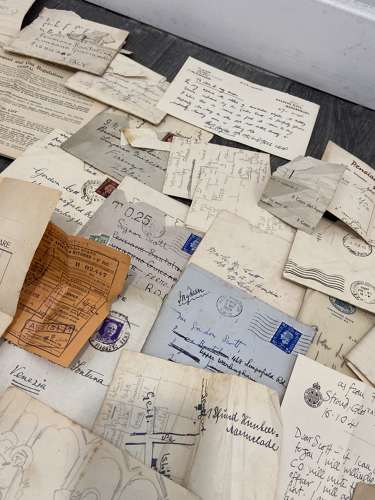 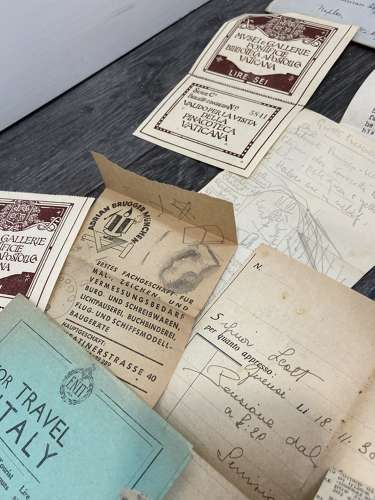 For sale is a very rare grouping of WW2 Conscientious Objector paperwork grouping too Gordon Scott, the paperwork is between Gordon Scott and his mum and dad. Gordon Scott was a conscientious objector and was forced into joining the NCC (non combatant corps) in the early 1940s. Gordon Scott also has several letter correspondences to WAAC war artists association committee where he is denied joining because he didn’t paint paintings of more well known places and figures. This paperwork lot includes letters, sketches, newspaper clippings, pressed flowers, tickets to museums, art gallery’s, operas, theatres and to places where famous people performed all around Europe. He had a strong interest in painting, music and architecture which can be seen in the letters. Plenty of research to be done and plenty of paperwork to be read, and a real insight to how conscientious objects are treated duringWorld War II. Some of the main letters have been photographed close up.

These letters are from both sides from Gordon and his mum/ dad starting in 1936 to 1947, starting from Gordon and his farther time in Scotland 1936, then from later 1936 to travel Europe: Mainly France, Germany and Italy. Where he talks abouts how the countries are changing, small details here and there and a lot about cathedrals, churches, museums and art galleries. In which there are many entrance cards, tickets and business cards. One of which, which has particular significance: “ Frau Mary Frank, Mitglied Der Reichsschrifttumskammer, Berlin W15” someone of importants in ww2 german literature and propaganda. There is a beautiful letter lot of his time in Munich in 1939 where he describes the people as lovely and welcoming, yet very traditional and full of culture, he describes the flower fields and cathedral as beautiful, and there is also some pressed flowers in this letter along with illustrations and texts. Another letter about the outbreak of war- 10.09.1939 from London, Gordon Scott upon the outbreak of war feels and almighty pain, and a few days later when he goes to the passport office in London to get a special permit he sees hundreds and hundreds of evacuees & refugees mostly children & London Jews.

There are also two official letters by the National scheme for disabled men and from Dr A W J Houghton declaring that Gordon Scott is a conscientious objector, and is forced into going the NCC non combatants corps (which a number of letters are from or too here). He was a conscientious objector because he was strongly religious which can be seen throughout his letters and i also believe he had sympathy towards Germans and Italians, as he talks very fondly about them in his letters. Where George Scott describes it as prison, that he’s treated poorly, given bad jobs etc. This is a real good insight to seeing how conscientious objectors were treated during World War II.

This is a great and impressive lot of paperwork/ ephemera to one family son, farther and mother. All about the sons (Gordon Scott’s) travels through Europe in the years leading up to the war, everything he saw from the beautiful views to some of the atrocities being committed in Germany in the years leading up to the war. To him being a conscientious objector, forced into non combatants corps and letters to WAAC war artists association committee. This is a great lot plenty of potential research and a real insight to how these people were treated. Really is a treasure trove of memories.