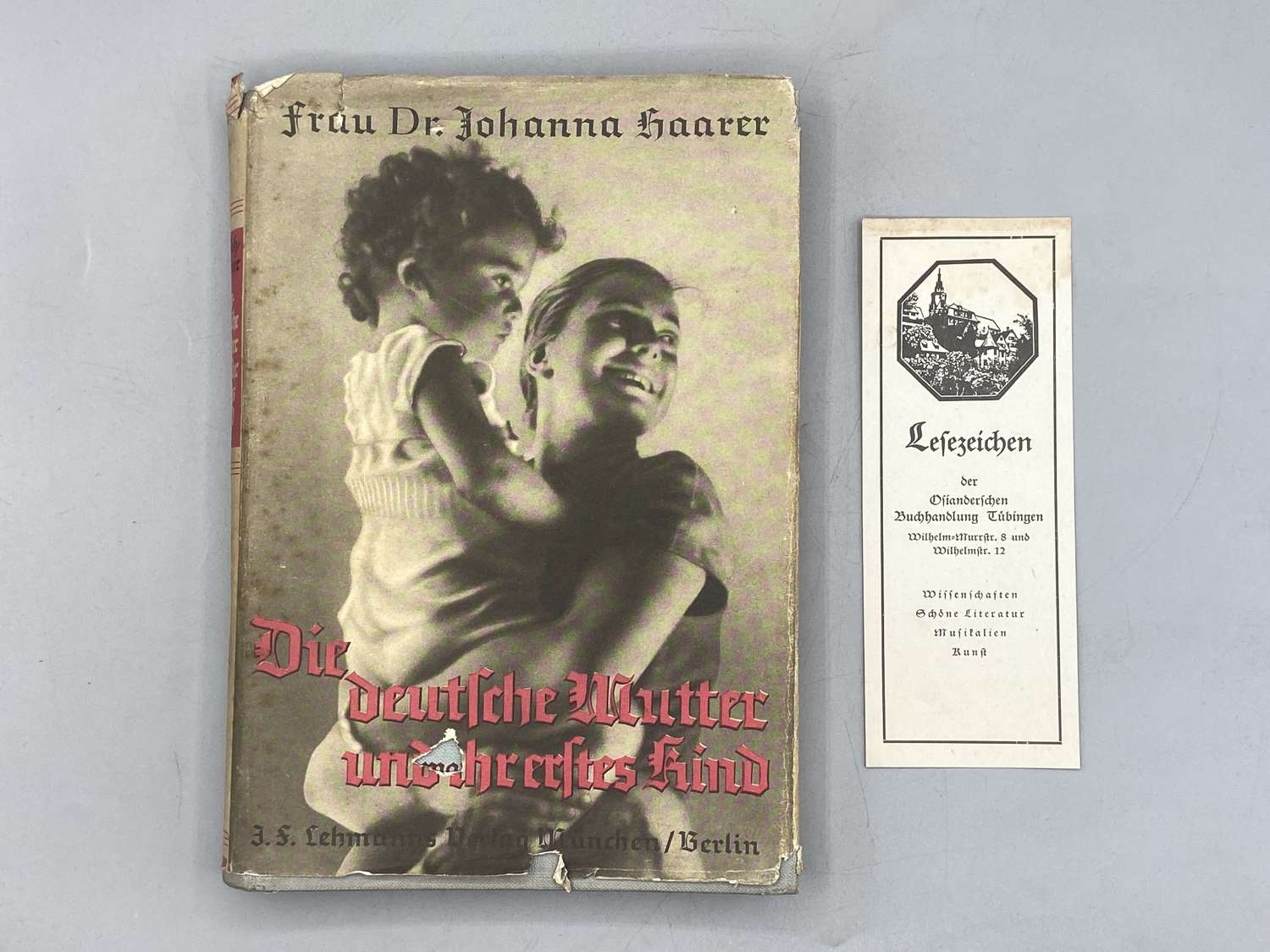 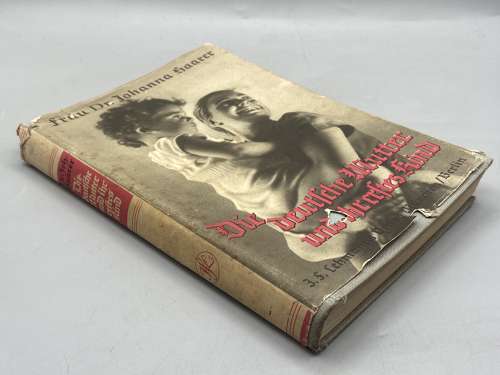 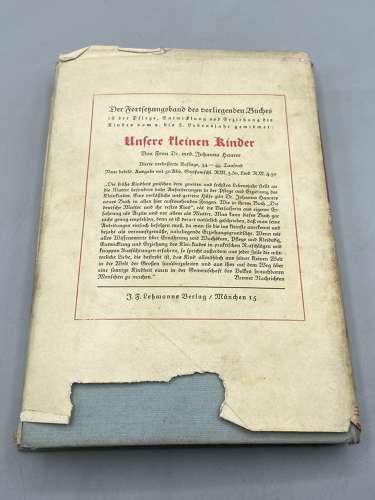 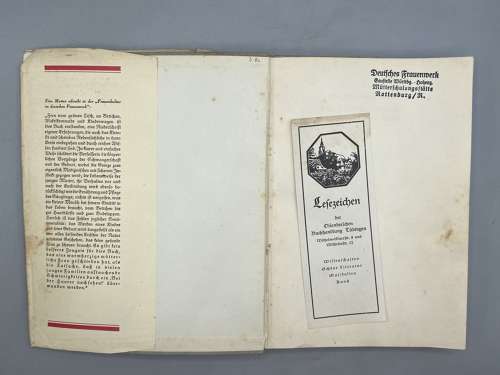 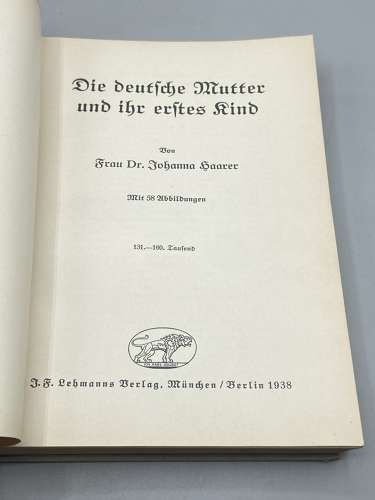 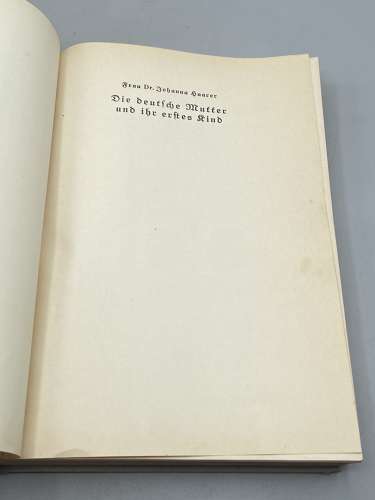 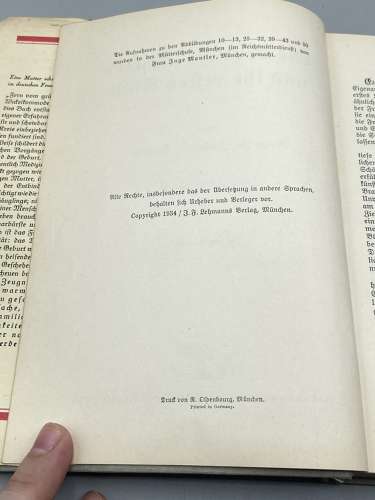 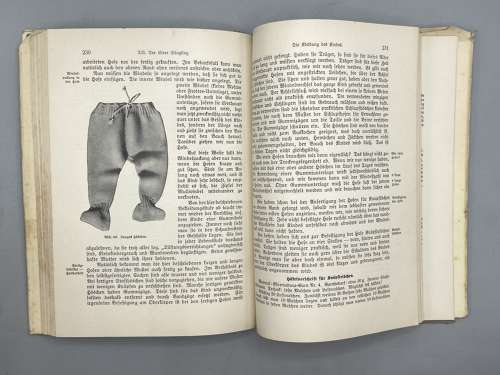 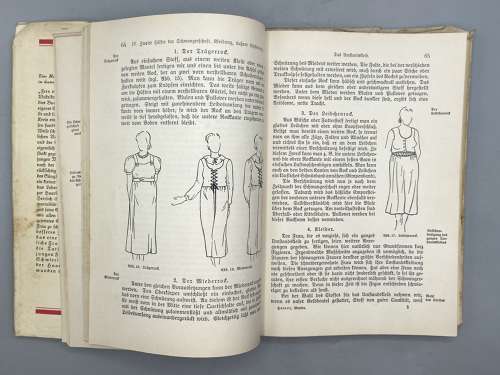 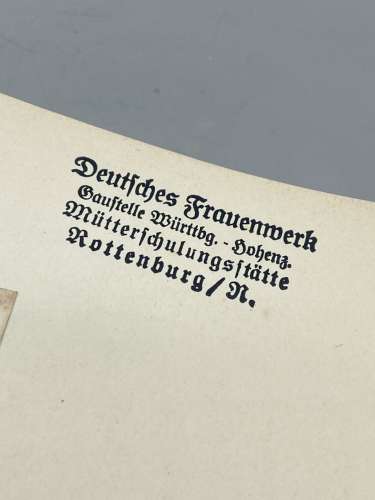 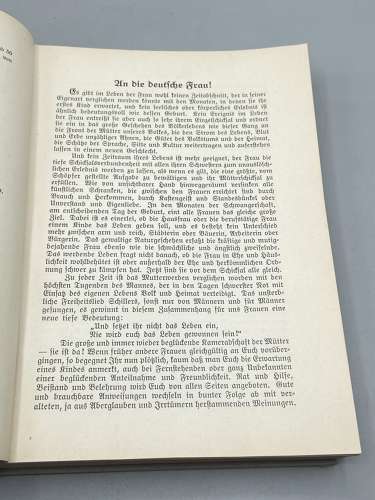 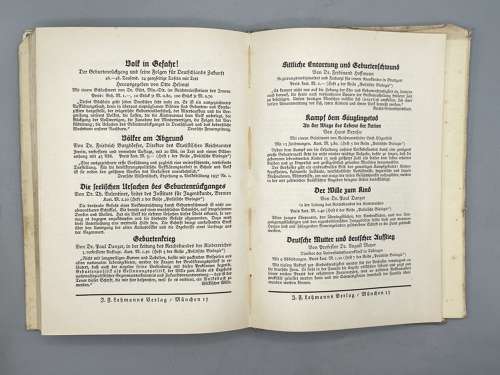 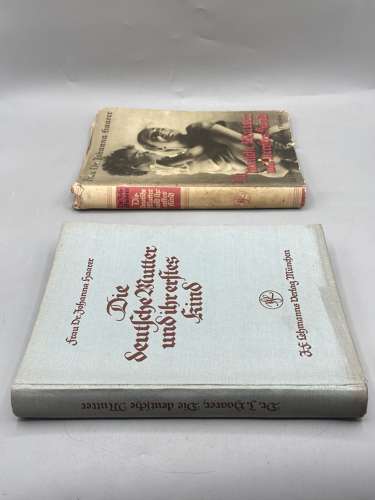 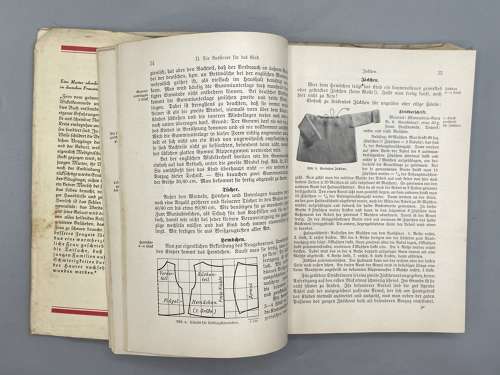 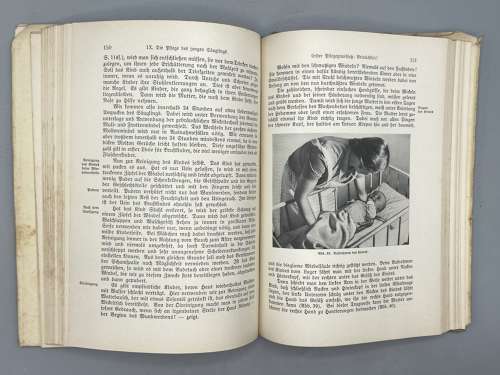 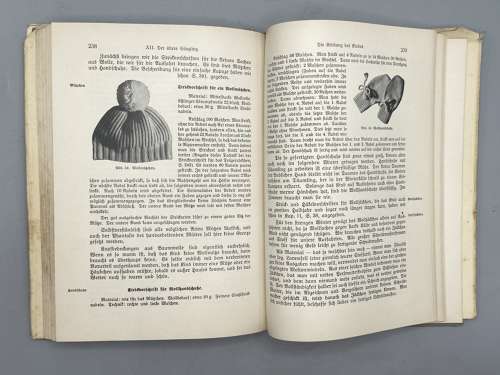 For sale is a very rare WW2 German 1938 Edition The German Mother & Her First Child Hard Cover Book, Dust Cover and book Mark. One of the most interesting things about this book is that it's stamped with  "Deutsches Frauenwerk Gaustelle Württbg. - Hohenz. Mütterschulungsstätte Rottenburg/N." Which was a Deutsches Frauenwerk maternity training centre based in Rottenburg from 1933 to 1945.

In 1931, loose-knit women’s groups such as the Deutscher Frauenorden (German Women’s Order), the Arbeitsgemienschaft Voelkisch Gesinnter Frauen (Association of Racialist Women), and the Rotes Hakenkreuz(Red Swastika) were combined by Adolf Hitler into one nationally recognized Nationalsozialistische Frauenschaft (NSF — Nazi Women’s League). Gertrude Scholz-Klink became the head of the NSF in 1934 and remained its leader until the war’s end in 1945. During the six years of war, NSF members helped German servicemen by providing refreshments to troops in transit, distributing food at markets in times of shortages, and working as guardians for women employed on military bases.

In 1934 physician Johanna Haarer published The German Mother and Her First Child. Her advice guided child-rearing in the Third Reich. It ultimately sold some 1.2 million copies, almost half of them after the end of the war. In that book, Haarer recommended that children be raised with as few attachments as possible. If a child cried, that was not the mother's problem. Excessive tenderness was to be avoided at all cost.

The child-rearing teachings of Johanna Haarer, a physician whose books were written during the Nazi era and aimed at raising children to serve the Führer. Flens (a pseudonym) was born after World War II, but Haarer’s books were still popular during her postwar childhood, where many households had a copy of The German Mother and Her First Child—a book that continued to be published for decades (ultimately cleansed of the most objectionable Nazi language).

One aspect was particularly pernicious: she urged mothers to ignore their babies’ emotional needs. Infants are hardwired to build an attachment with a primary care giver. The Nazis wanted children who were tough, unemotional and unempathetic and who had weak attachments to others, and they understood that withholding affection would support that goal.

Haarer was a pulmonologist, who, despite having no pediatric training, was touted as a child-rearing expert by the Nazis (the National Socialists). The recommendations from her book, originally published in 1934, were incorporated into a Reich mothers training program designed to inculcate in all German women the proper rules of infant care. As of April 1943, at least three million German women had gone through this program. In addition, the book was accorded nearly biblical status in nursery schools and child-care centers.

Although children need sensitive physical and emotional contact to build attachments and thrive, Haarer recommended that such care be kept to a minimum, even when carrying a child. This stance is clearly illustrated in the pictures in her books: mothers hold their children so as to have as little contact as possible.

Haarer viewed children, especially babies, as nuisances whose wills needed to be broken. “The child is to be fed, bathed, and dried off; apart from that left completely alone,” she counseled. She recommended that children be isolated for 24 hours after the birth; instead of using “insipid-distorted ‘children’s language,’” the mother should speak to her child only in “sensible German”; and if the child cries, let him cry.

Sleep time was no exception. In The German Mother and Her First Child, Haarer wrote, “It is best if the child is in his own room, where he can be left alone.” If the child starts to cry, it is best to ignore him: “Whatever you do, do not pick the child up from his bed, carry him around, cradle him, stroke him, hold him on your lap, or even nurse him.” Otherwise, “the child will quickly understand that all he needs to do is cry in order to attract a sympathetic soul and become the object of caring. Within a short time, he will demand this service as a right, leave you no peace until he is carried again, cradled, or stroked—and with that a tiny but implacable house tyrant is formed!”

Before publishing The German Mother and Her First Child, which ended up selling 1.2 million copies, Haarer had written articles about infant care. Later titles included Mother, Tell Me about Adolf Hitler!, a fairy-tale-style book that propagated anti-Semitism and anti-Communism in language a child could understand, and another child-rearing manual, Our Little Children. Haarer was imprisoned for a time after Germany’s defeat in 1945 and lost her license to practice medicine. According to two of her daughters, she nonetheless remained an enthusiastic Nazi. She died in 1988.

This Book is a must have for collectors of 1930s and 1940s German memorabilia collectors as the majority of this generation was brought up in this strict German upbringing, which led to some of the most ruthless German National Socialists in history. The book is in excellent condition, the dust cover is a little worn. With the original Deutsches Frauenwerk maternity training centre stamp inside. This will be sent via Royal Mail and dispatched within 2-3 working days.