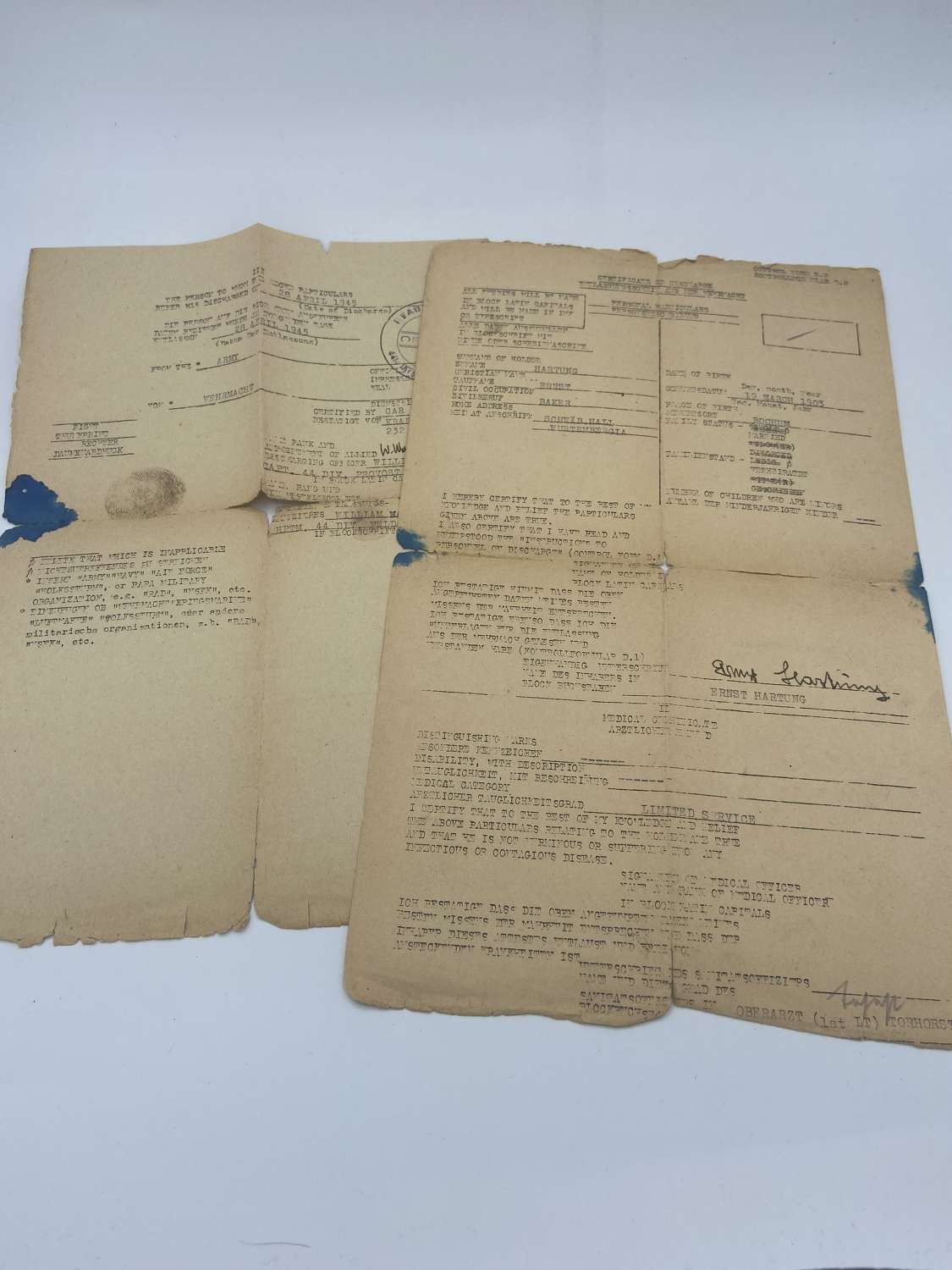 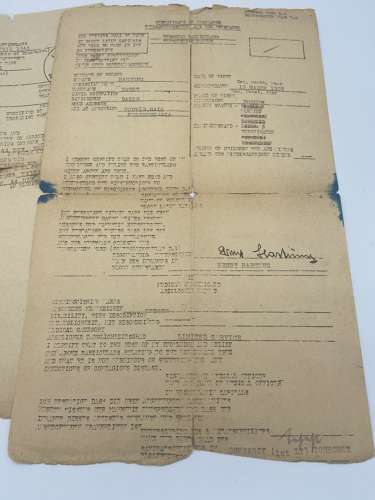 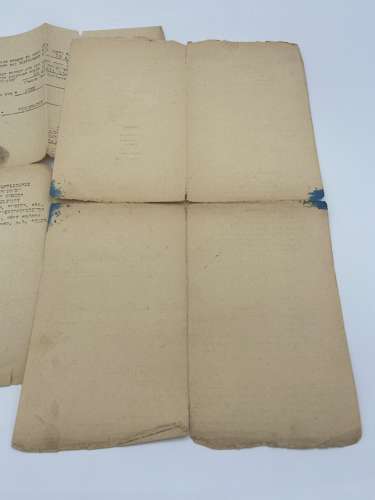 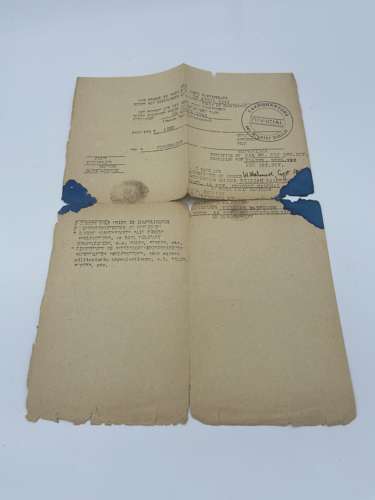 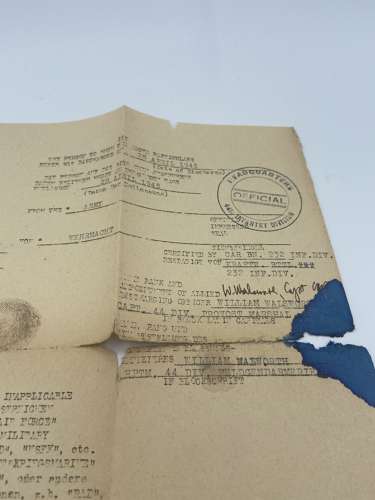 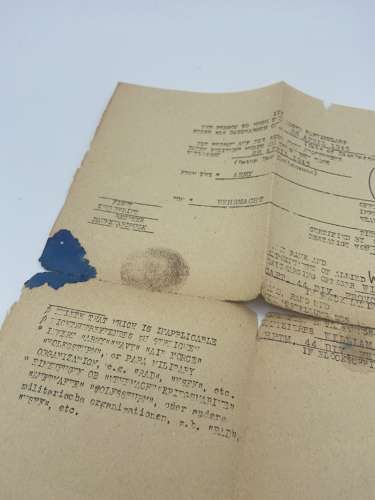 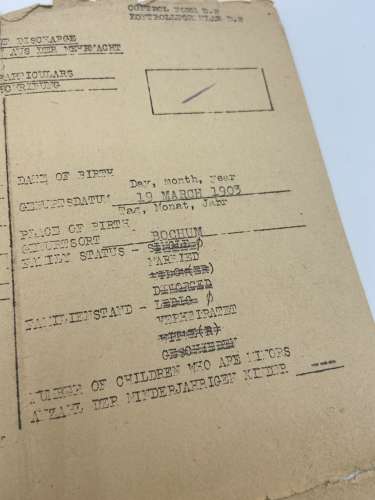 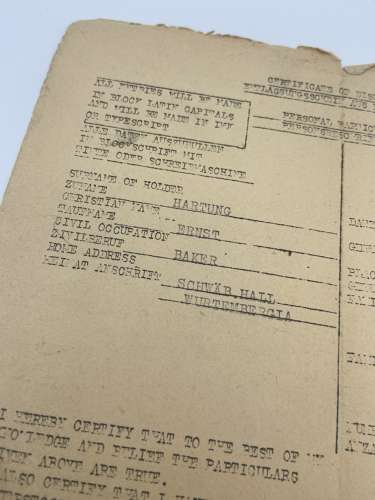 SOLD
For sale is a WW2 German Military Officer Discharge Certificates of Ernst Hartung, certificates dated 28th April 1945, where he was discharged from the Wehrmacht. Ernst Hartung was born 19th March 1903 in Bochum, and his occupation before the war was a baker. Ernst surrendered to captain William Walsword who was the captain of the 44th division, provost marshal, in which he’s hand signed these documents. Ernst Hartung was in the car battalion 232 infantry division when he and his comrades surrendered to the Americans. Ernst had to sign these documents and finger print these documents upon surrendering before being sent home or to a prisoner of war re-education centre. Ernst Hartung surrendered in the German town of Wertach to the 44th infantry division.
On April 28, 1945, Wertach would have become a robbery of flames almost for the sixth time. Only a few brave men were able to prevent it at the last moment. The Americans were already on the outskirts of Wertach, where there were still about 2000 German soldiers in the village with the order to stop the enemies.
More details on the lead up to his and his units surrender:
On Friday, February 25, 1944, 200 American bombers appeared at 2 p.m. and attacked the Messerschmittwerke. 110 lives were lost, including whole families in the neighboring settlement houses and about fifty concentration camp inmates. 60% of the plant was destroyed. At 22.00 sirens howled again as 248 British bombers created a 40-minute inferno of aerial mines and incendiary bombs which additionally turned the debris field into a sea of flames. An hour later came the third wave of assault. Another 290 British bombers again created burning chaos for 45 minutes. The inner city (especially Karls-, Ludwigstraße and the area around Wertachbrucker Tor) as well as the Jakobervorstadt, Lechhausen and Haunstetten were the hardest hit. The bombs killed 730 people that night alone, including 285 women and 78 children. Adding to the 145 Allied airmen killed and the dead of the afternoon, the totals of the dead rose to nearly a thousand. More than 80,000 Augsburgers became homeless with most fleeing their burning neighborhoods at night or the next day. Finally on April 28, 1945, units of the 7th US Army arrived in Augsburg without any resistance.
The 44th infantry divisions movement of 1945 are as followed: An aggressive defense of the Sarreguemines area was continued throughout February 1945 and most of March. Moving across the Rhine at Worms, 26 March, in the wake of the 3d Division, the 44th relieved the 3d, 26–27 March, and crossed the Neckar River to attack and capture Mannheim, 28–29 March. Shifting to the west bank of the Main, the division crossed that river at Gross-Auheim in early April, and engaged in a 3-week training period. Attacking 18 April, after the 10th Armored Division, the 44th took Ehingen, 23 April, crossed the Danube, and attacking southeast, took Füssen, Berg, and Wertach, in a drive on Imst, Austria. On 2 May, a group of V-2 rocket scientists that included Wernher von Braun surrendered to the 44th. Pursuing the disintegrating enemy through Fern Pass and into the Inn River valley, the 44th set up its CP at Imst on 4 May. After a short period of occupation duty, the division returned to the United States in July 1945 for retraining prior to redeployment, but the end of the Pacific war resulted in inactivation in November 1945 at Camp Chaffee, AR.
The condition isn’t the best, however it’s all in one piece. This is a great piece of history especially intresting if you collect the last days of the 3rdreich items! This will be sent via 1st class signed for and dispatched within two to three working day’s.