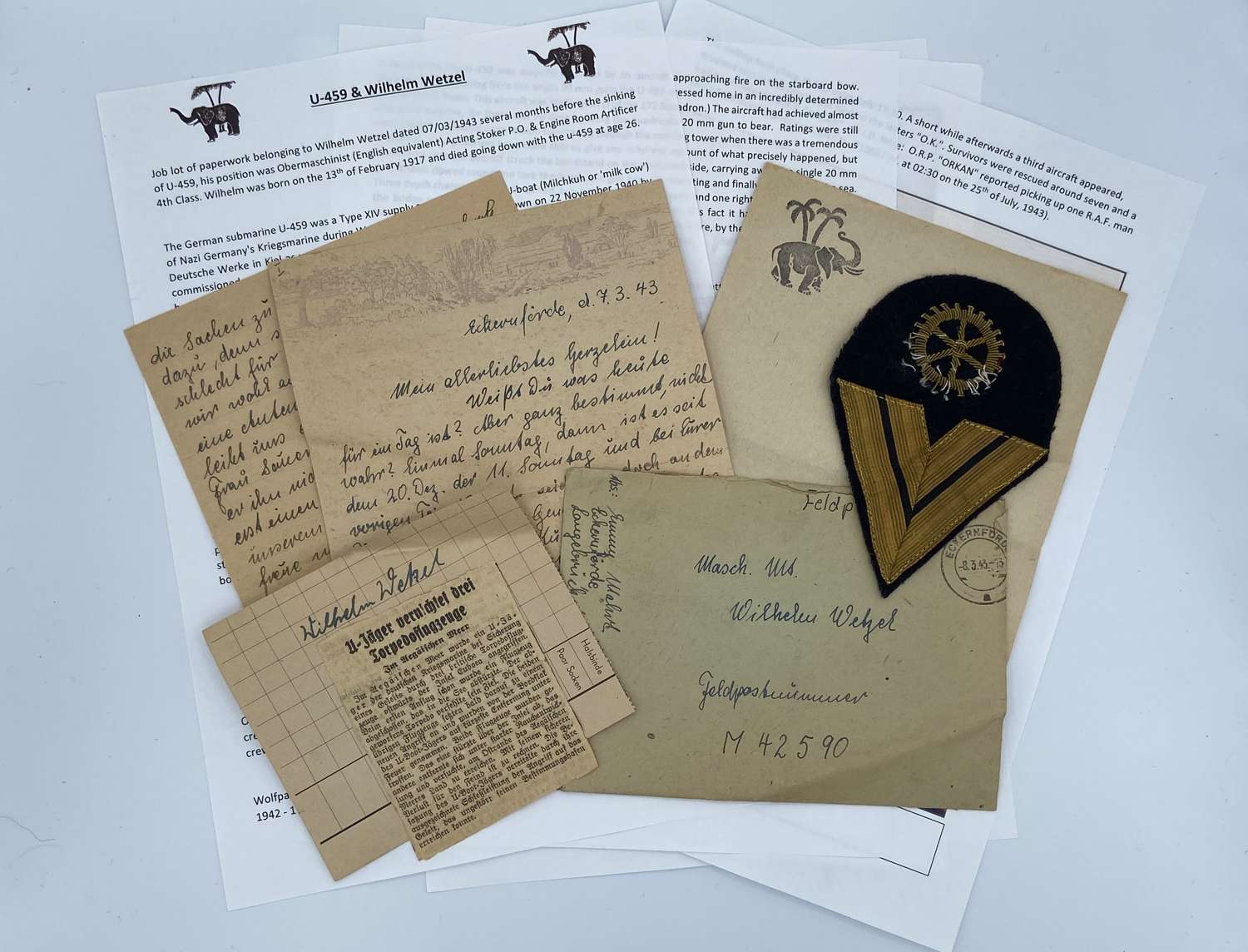 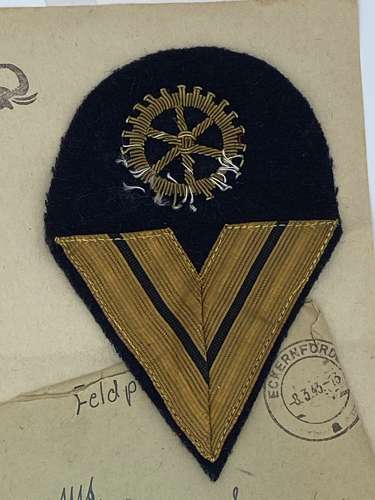 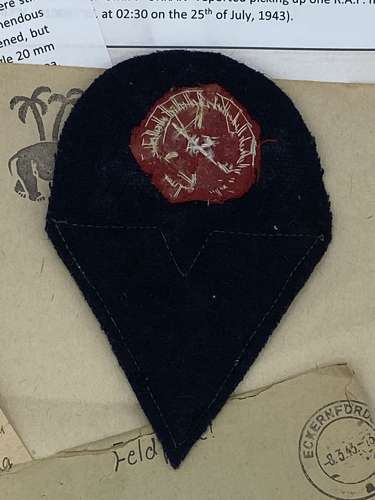 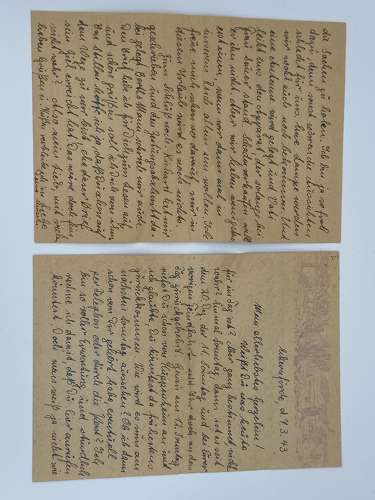 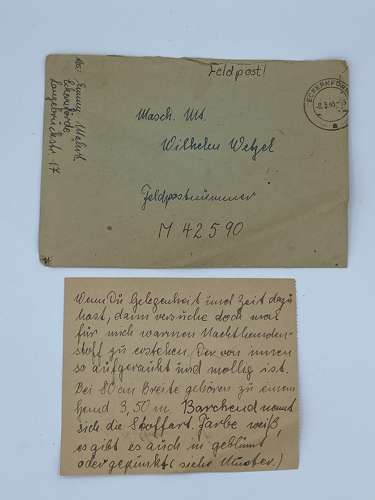 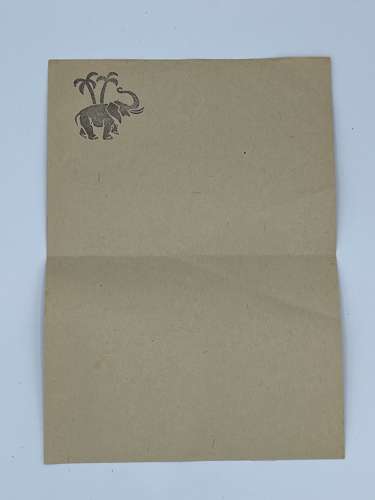 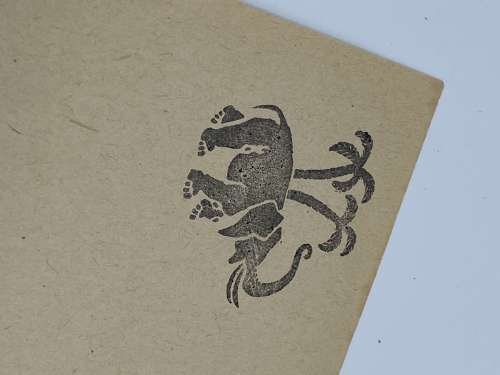 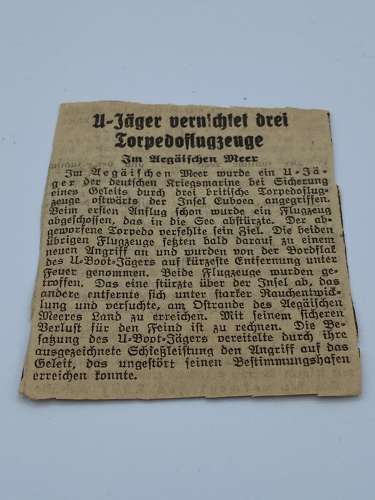 For sale Job lot of paperwork and patch belonging to Wilhelm Wetzel dated 07/03/1943 several months before the sinking of U-459, his position was Obermaschinist (English equivalent) Acting Stoker P.O. & Engine Room Artificer 4th Class. Wilhelm was born on the 13th of February 1917 and died going down with the u-459 at age 26. The letters were written just months before the sinking of the U-boat, you will receive a copy of the research gathered too.

The German submarine U-459 was a Type XIV supply and replenishment U-boat (Milchkuh or 'milk cow') of Germany's Kriegsmarine during World War II. Her keel was laid down on 22 November 1940 by Deutsche Werke in Kiel as yard number 290. The submarine was launched on 13 September 1941 and commissioned on 15 November, with Kapitänleutnant Georg von Wilamowitz-Moellendorff in command; he remained in charge until the boat was lost, receiving promotion to Korvettenkapitän in the process. The U-459 conducted six patrols, but as a supply boat, she avoided combat. The submarine initially served in the 4th U-boat Flotilla, for training before moving on to the 10th (in April 1942) and the 12th flotillas (in November of the same year) for operations. The U-459 had 6 patrols, 297 days at sea during patrols (299 days at sea overall). The 1 and 2nd patrols, having moved from Kiel to Helgoland, the U-459 set-off for occupied France, arriving at St. Nazaire on the 15th of May 1942, after traversing the north-central Atlantic. Her captain, von Wilamowitz-Moellendorf, was at 48 and one of the oldest skippers at the time. Her second patrol began on the 6th of June 1942 and it was at about this time that Von Wilamowitz-Moellendorf was promoted to Korvettenkapitän. With the 3rd and 4th patrols, her third foray saw the boat sail into the south Atlantic, as far as Namibia. She departed St. Nazaire on the 18th of August 1942 and returned on the 4th of November. Her fourth patrol was her longest, from the 20th of December 1942 to the 7th of March 1943, a total of 78 days. She started in St. Nazaire and finished in Bordeaux and this voyage included sailing toward Cameroon, but the boat's nearest position to that country was reached on the 18th of January 1943. The 5th and 6th patrols and the loss of her fifth patrol began when she left Bordeaux on the 20th of April 1943. On the 30th of May she shot down a British Whitley aircraft. She was also attacked on the same day by an RAF Liberator with a total of ten depth charges. The U-459 was not damaged but her AA guns caused slight injury to the attacking Liberator. The U-459 began sinking after being attacked by Vickers Wellingtons' aircraft. She returned to her French base on the 30th of May. Having left Bordeaux on 22 July 1943, the U-459 was attacked by two British Wellington aircrafts of the No. 172 Squadron RAF near Cape Ortegal in Spain on the 24th of July. The boat shot one of the Wellingtons down, but 18 submarine crewmen were killed and she was so badly damaged by this attack that she had to be scuttled. 41 of her crew survived to be taken prisoner. Wolfpack operations: The U-459 operated with the following Wolfpacks during its career: Eisbär (25 Aug 1942 - 1 Sep 1942).

Around 1715 the U-459 was surprise attacked by an aircraft approaching fire on the starboard bow. Despite the fire coming from the single 20 mm guns the U-459 pressed home in incredibly determined complete surprise, for there was no time to bring the quadruple 20 mm gun to bear. Ratings were still trying to get additional ammunition supplies up through the conning tower when there was a tremendous explosion. Few prisoners have been able to give any coherent account of what precisely happened, but it is known that the aircraft struck the bandstand on the starboard side, carrying away the single 20 1mm attack. (N.I.D. Note: This aircraft was Wellington Q of the 172 Squadron.) The aircraft had achieved almost Bun. It then slowed round and tore the quadruple gun from its mounting and finally crashed into the sea. Three depth charges became detached, two falling on the bandstand and one right after. All ratings abaft the bridge were killed by the impact of the aircraft. Because of this fact it has not been possible to establish satisfactorily whether the aircraft was brought down by A/A fire, by the dry explosion of a depth charge or whether it crashed due to an error of judgment by the pilot. (N.I.D. Note: The Air Gunner, sole survivor of Q/172, stated that when attacking, the Captain reported over inter-communication that the U-boat was preparing to fight. At 1000 yards, pieces started to fly off the fuselage when at a height of 100 feet. There was an explosion and he lost consciousness, and upon regaining awareness he found himself in the water beside a dinghy.) At the time of the crash the U-459 was proceeding slowly ahead. In a brief moment of panic, the three depth charges were precipitately thrown overboard and at least one exploded under the stern, thus wrecking the steering gear and causing considerable damage in the engine room. The switchboards in the electric motor room caught fire and the Diesels were jolted from their bases. Out of control, the U- boat began to turn in circles and due to this no attempt could be made to rescue the single R.A.F. survivor who was observed floating in a dinghy. Wilamowitz-Möllendorf was still reluctant to abandon ship and believed that a chance remained that the damage could be repaired and possibly that the U-boat could make base on the surface. Accordingly, he ordered a signal to be made requesting air escort at the earliest possible moment. However, as a precaution he ordered all the thirty rubber dinghies to be brought on deck. The fire in the electric motor room was under control even though acetylene bottles beside the bridge, which had been fired by the aircraft, were still burning. In the second aircraft attack, hopes were dashed when a second aircraft appeared and dropped two or three depth charges, wide of the U-boat and then returned to machine gun the decks. (N.I.D., Note: This aircraft was V of 547 Squadron.) Machine gun fire destroyed a considerable number of the dinghies and penetrated the external tanks. Some ratings tried to clear away the 37 mm gun, but they were either killed or wounded by a further burst of fire. It was this attack which decided Wilamowitz-Möllendorf to abandon ship. A signal reporting sinking and the shooting down of one aircraft was made, although the transmitter was damaged and working only at exceptionally low strength. It was doubted whether the signal was ever picked up. Wilamowitz-Möllendorf then ordered every man into the water. He himself remained on the bridge and having saluted his men as they pulled away in the remaining rubber dinghies, went below to scuttle the U-boat. He was never seen again by survivors and it was thought that he made no attempt to save himself. The U-boat remained about five minutes above water. There was then a sharp explosion and black smoke poured from the conning tower. The U-459 then settled rapidly and finally sank by the stern.

The sinking took place at approximately 17:30. A short while afterwards the third aircraft appeared drop to smoke lights and flash the letters okay survivors were rescued and 7 1/2 hours later bye o.r.p ‘orkan’.