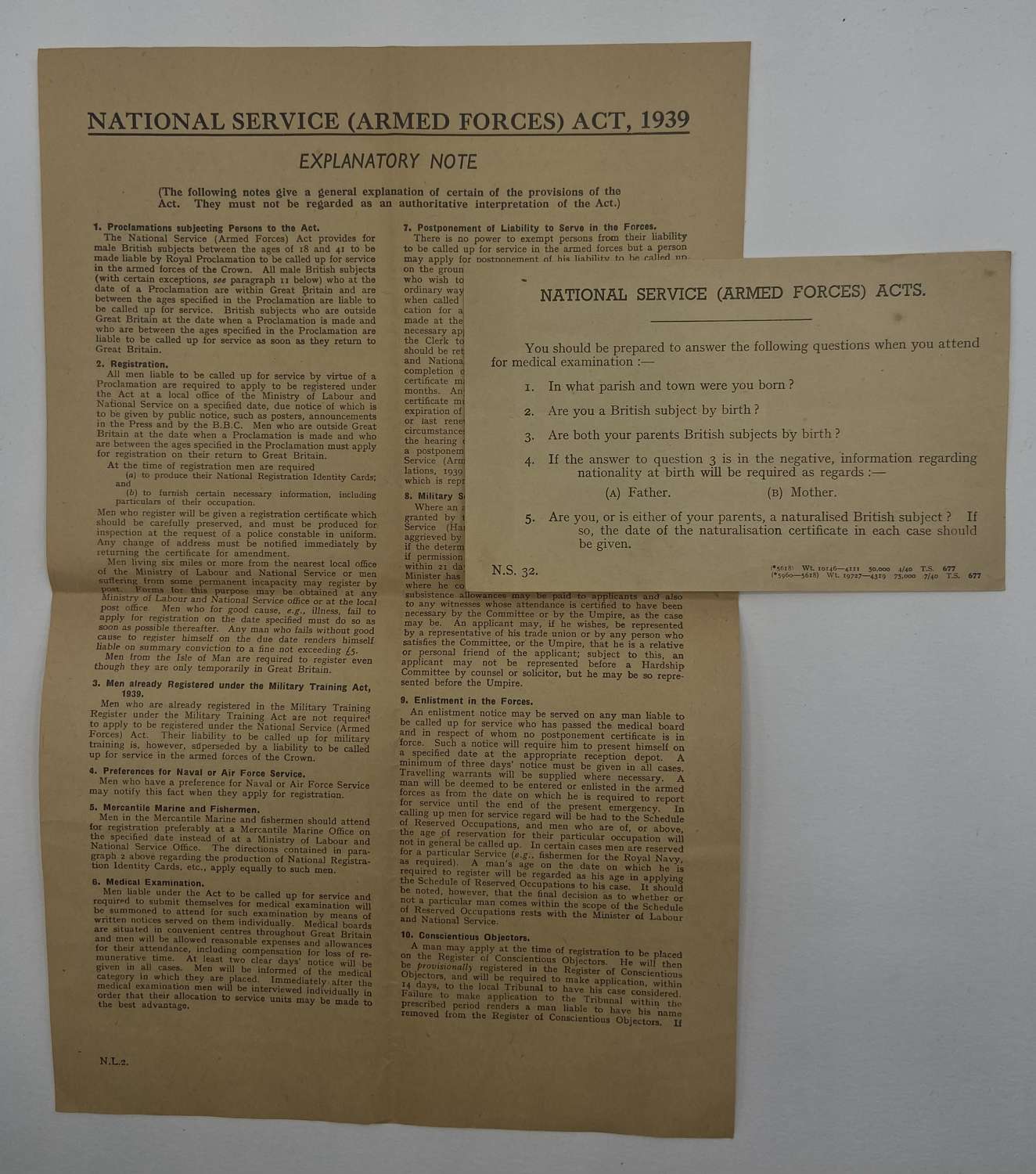 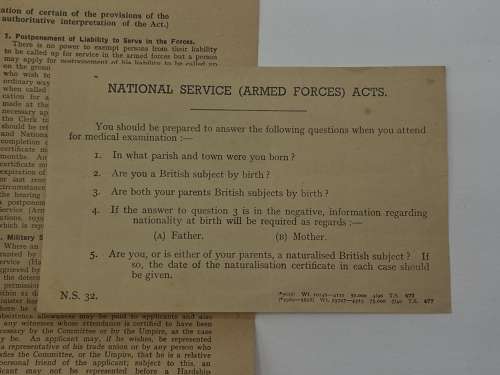 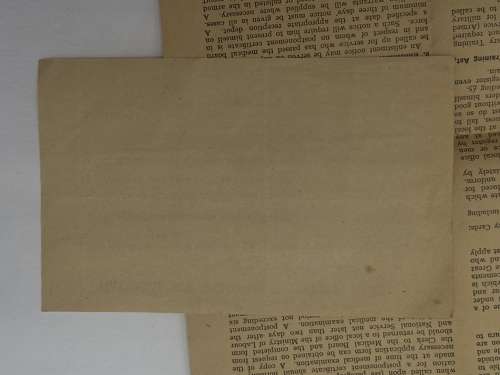 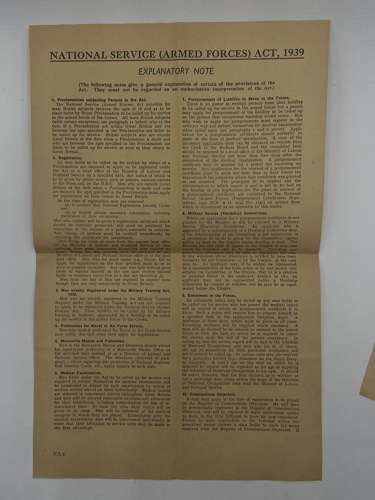 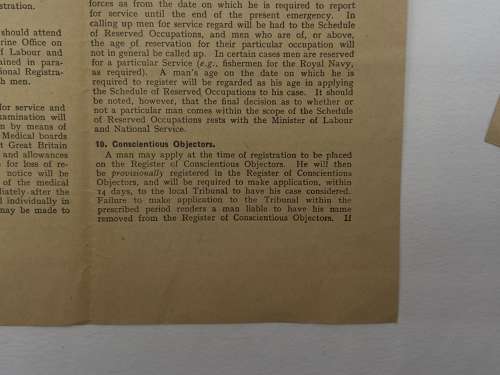 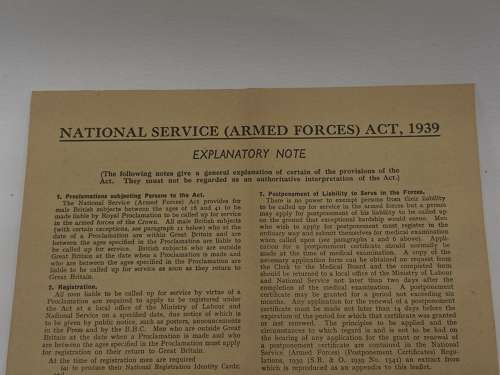 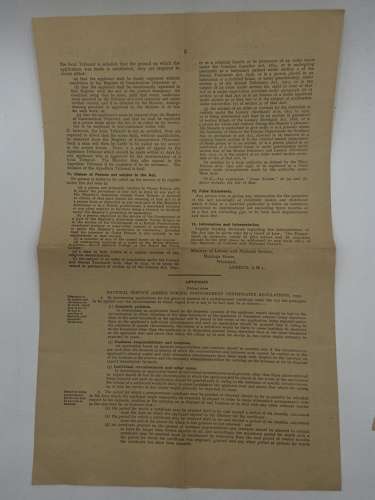 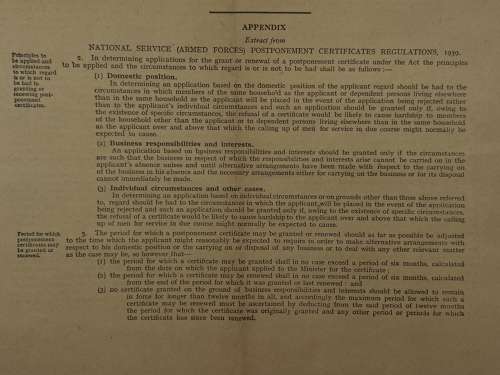 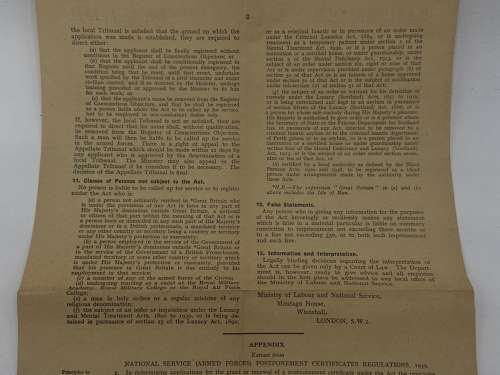 For sale is a Rare WW2 National Service Armed Forces Act 1939 Explanationary Note & Preparation medical exam Card questions that you might be asked during your medical evaluation to see if your fit/ healthy enough to join the Royal Air Force. These are original war time documents.

Principles to be applied and

2. In determining applications for the grant or renewal of a postponement certificate under the Act the principles to be applied and the circumstances to which regard is or is not to be had shall be as follows:

An application based on business responsibilities and interests should be granted only if the circumstances are such that the business in respect of which the responsibilities and interests arise cannot be carried on in the applicant's absence unless and until alternative arrangements have been made with respect to the carrying on of the business in his absence and the necessary arrangements either for carrying on the business or for its disposal cannot immediately be made.

(3) Individual circumstances and other cases.

Period for which postponement certificates may be granted or renewed.

3. The period for which a postponement certificate may be granted or renewed should as far as possible be adjusted to the time which the applicant might reasonably be expected to require in order to make alternative arrangements with respect to his domestic position or the carrying on or disposal of any business or to deal with any other relevant matter as the case may be, so however, that

The second document, of preparation questions for medical exam states the following:

You should be prepared to answer the following questions when you attend for medical examination :

1. In what parish and town were you born?

2. Are you a British subject by birth?

3. Are both your parents British subjects by birth?

4. If the answer to question 3 is in the negative, information regarding nationality at birth will be required as regards :

5. Are you, or is either of your parents, a naturalised British subject? If so, the date of the naturalisation certificate in each case should be given.

These two documents are in great condition and a rare insight into the enlistment process in Britain in 1939. This will be sent via 1st class signed for and dispatched within two working days.