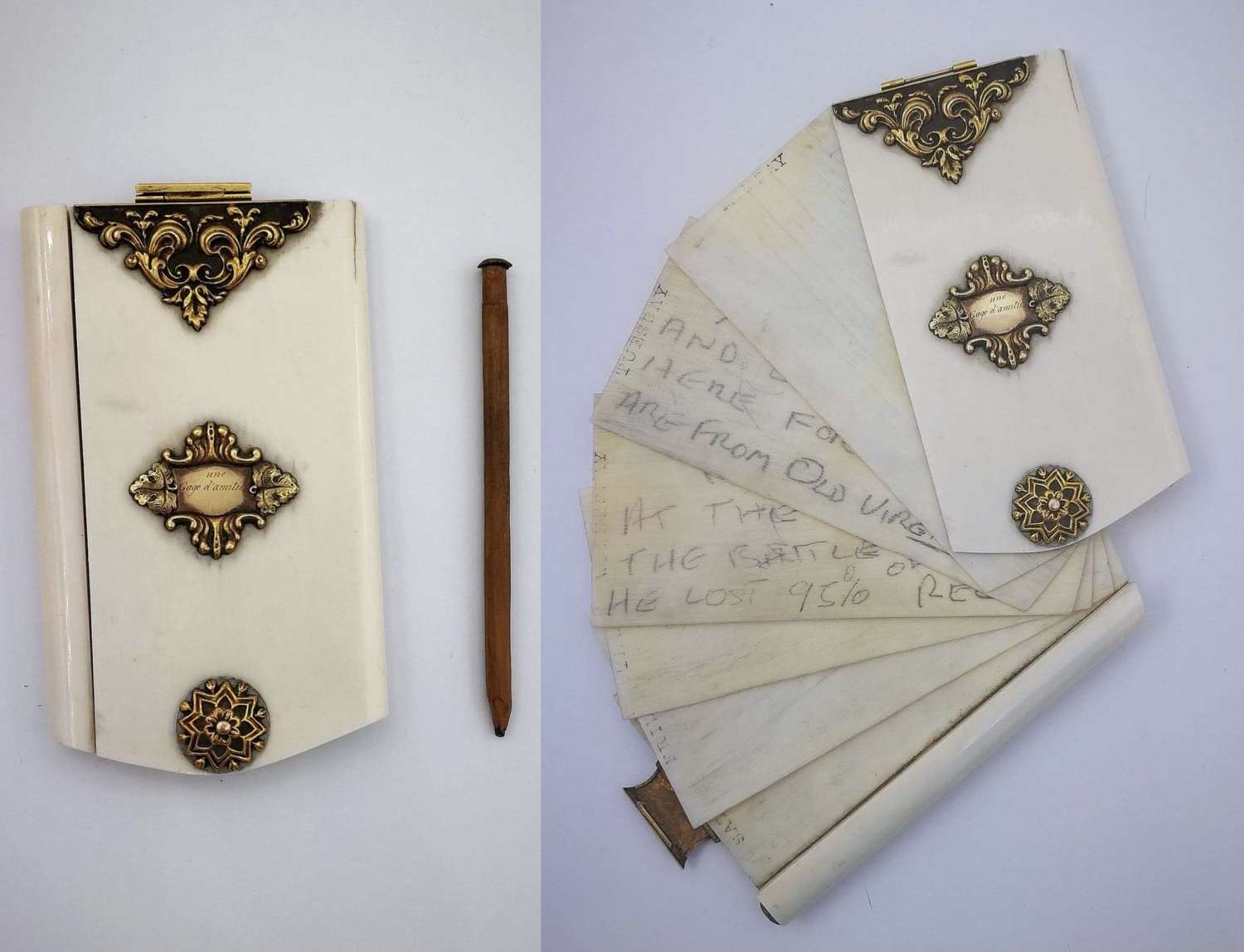 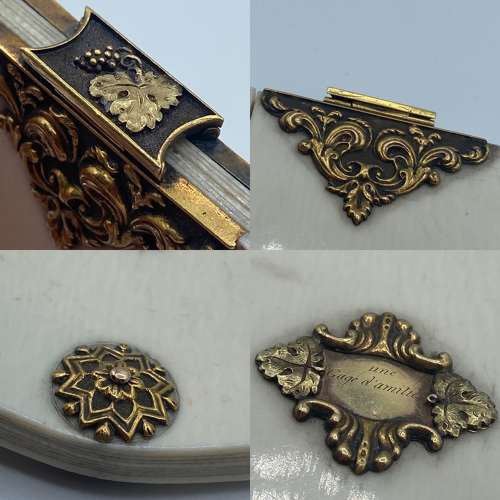 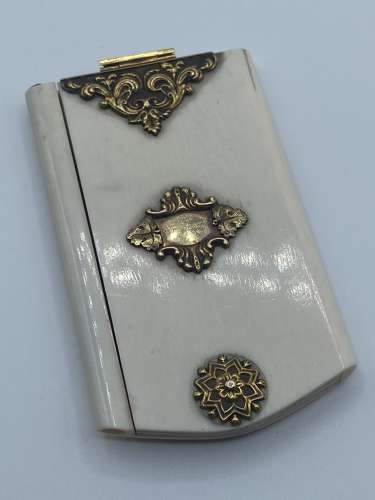 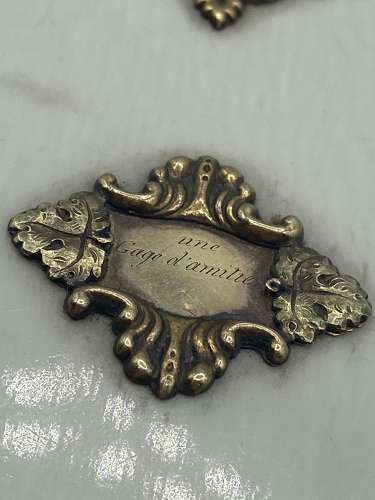 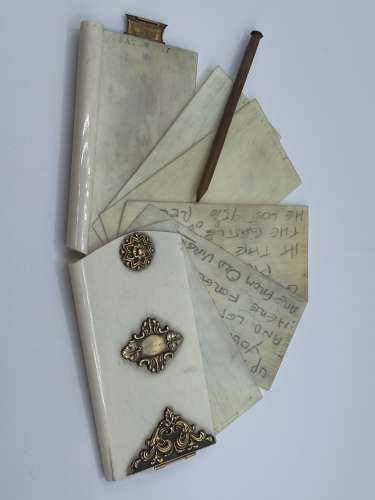 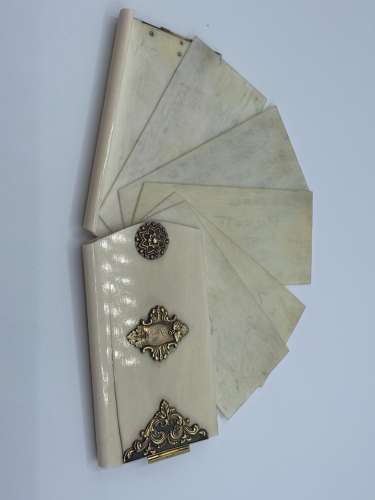 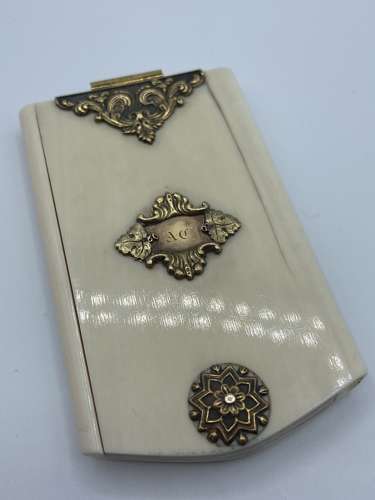 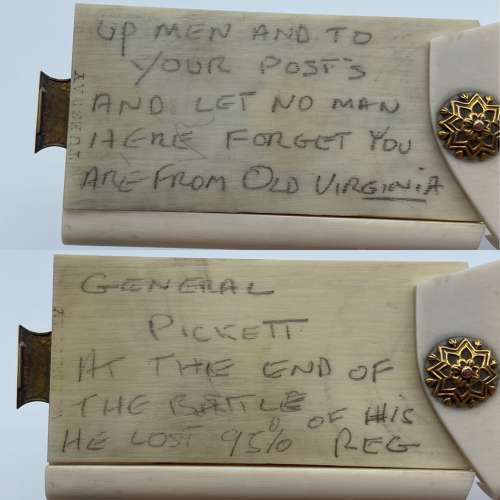 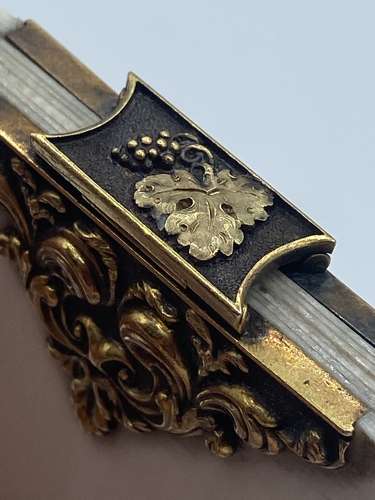 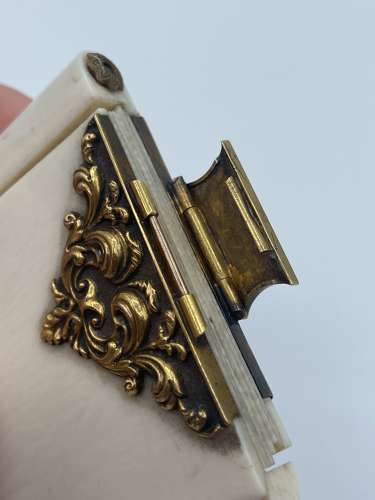 For sale is a Beautiful 1850s Quality French Bone Traveling calendar/ Planner with elaborately mounted 18ct gold floral patterns. On the front of the diary/ planner is a floral plaque with the words “une gage d'amitié” inscribed, which is French for “a token of friendship” and on the other side is the initials of the owner “A.C”. This diary/ planner would have been given by a French Lieutenant in the 1850s to a US Lieutenant or a soldier of similar rank as a sign of friendship between the two countries. (Which was a common practice in these times, and even in recent climates). This notebook has a very interesting history, which ties in with the American civil war of 12th of April 1861 to the 13th of May 1865. This diary/ planner was most likely used in the US civil war in particular at the Battle of Gettysburg in General pickets charge. Written in pencil on the inside on the days Tuesday and Wednesday.

On the day Tuesday, written in pencil is the following:

“Up men and to your posts and let no man here forget you are from old Virginia.”

On the Wednesday, written in pencil is the following:

“General Pickett at the end of the battle he lost 95% of his reg.”

The famous saying said on the Tuesday, is well known for the following battle. Pickett’s Charge was the culmination of the Battle of Gettysburg. Taking place on July 3, 1863, the third and final day of battle, it involved an infantry assault of approximately 15,000 Confederate soldiers against Union Major General George Meade’s troops’ position along Cemetery Ridge, manned by some 6,500 Federals. The assault would take the nine brigades of Confederate soldiers over three-quarter mile of open ground susceptible to cannon fire the entire time. The ill-fated assault resulted in over 6,000 Confederate casualties and marked the end of the battle of Gettysburg as well as Lee’s last invasion of the north.

The assault became known as Pickett’s Charge, although was led by the division of Major General George Pickett on the Confederate right and that of Brigadier General James Johnston Pettigrew on the left. Additionally, two brigades of Maj. Gen. Isaac Trimble’s division came behind Pettigrew in support, and the brigades of Brig. Gen. Cadmus M. Wilcox and Brig Gen. Edward Perry (the latter led by Colonel David Lang) were behind and to the right of Pickett to protect his flank. Pickett’s was the only fresh division in the assault, having arrived only the night before, and the Confederate commander, Gen. Robert E. Lee, had specified it was to lead the assault.

Measurements Whilst the planner is closed:

Measurements of each bone page:

Measurements of the pencil:

Measurements of Centre plaques with inscription on:

Condition wise this is almost perfect, on the front there is a crack down the side, other than that this beautiful piece is faultless. This really is a beautiful and quality piece, with highly detailed 18ct tested elaborately mounted floral patterns.

This truly is a beautiful item of great quality and craftsmanship, not to mention its incredible history. With further research you may be able to discover who this cracking piece belonged too.

This will be sent via special delivery and insured, happy to send internationally.