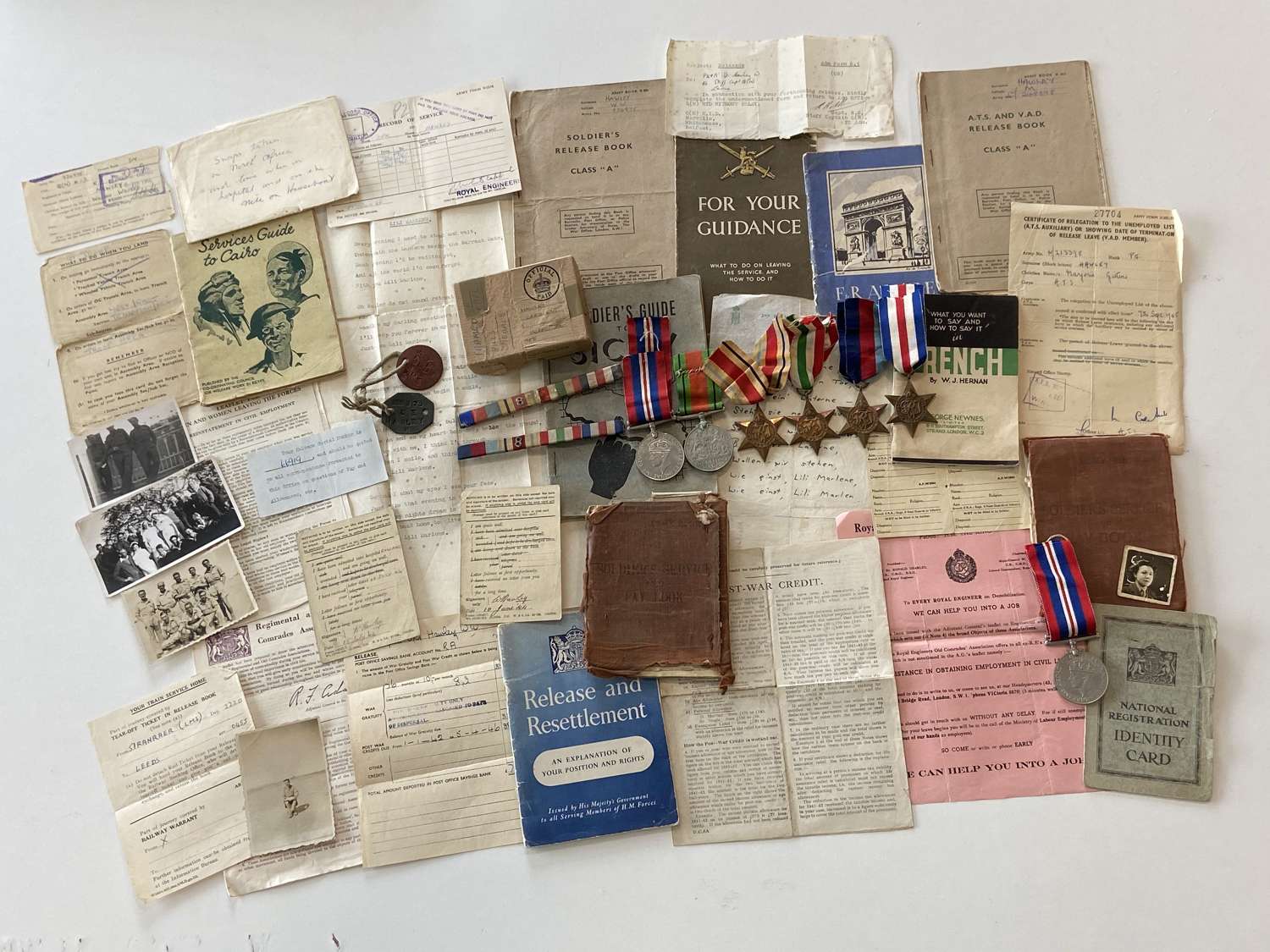 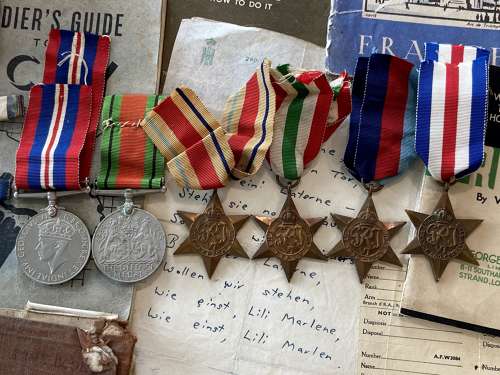 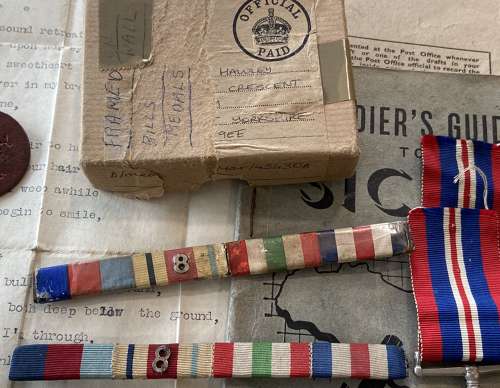 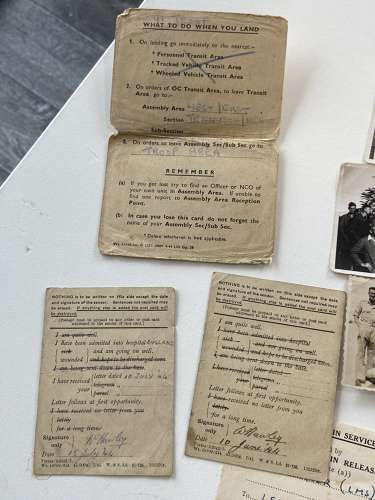 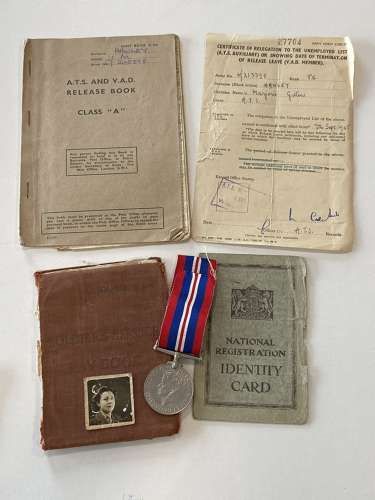 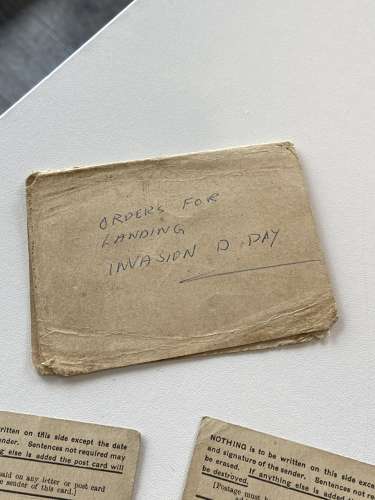 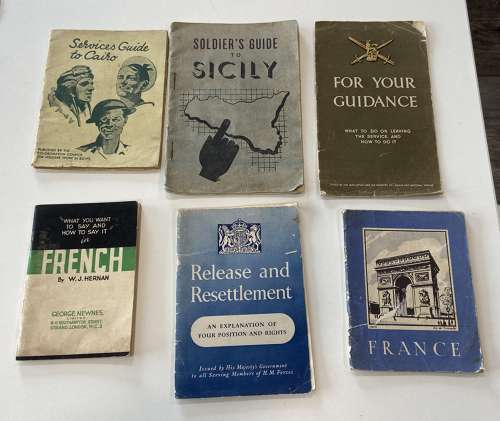 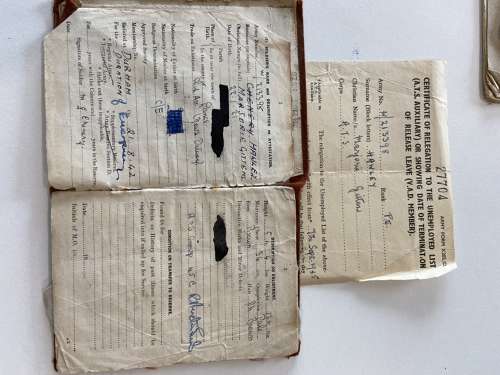 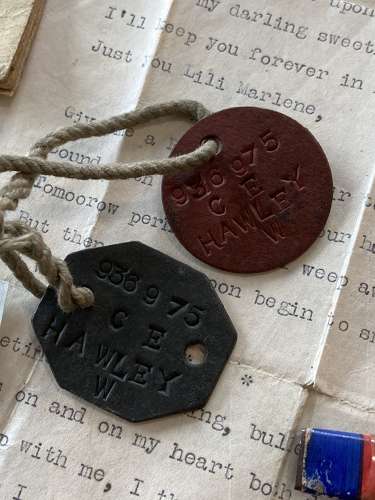 For sale is a Large WW2 Husband & Wife Medal group. The wife W/213398 PTE Majorie Giltens Hawley ATS, date of birth 22.01.1921, she enlisted in Durham 21.8.1942 and discharged 7th September 1945. Of hers in this group is her soldiers pay book, release book, certificate of relegation, a small photo of her, national insurance identity document and war medal.

The husband 936975 PTE William Hawley Royal artillery. Serving with the 5th battalion wast Yorkshire regiment through the duration of the war. Hawley enlisted in Leeds on the 16th June 1939 and was discharged 5.4.1946. In his military career he served with the royal artillery from 15/09/1939 to 28/03/1945, and with the royal engineers as a sapper served from the 21/03/1945 to the 05/04/1946. During his career he served all over the world including France, Germany, Egypt- Cairo, Italy-Sicily, North Africa etc! The the 5th battalion east York’s joined up with 50th (Northumbrian) Division through the Western Desert, Tunisian and Sicily campaigns before landing in the first wave on Gold Beach on D Day and then fighting through Normandy and North West Europe.

Hawley served at the battle of d-day on the 6th June 1944, this grouping contains his “What to do when you land” card. He landed on GOLD beach with the 50th Northumbrian Division, 5th battalion East Yorkshire regiment. H-Hour for the landing at Gold was set at 07:25 on King sector (50 minutes later than in the American landings, because of differences in the tide). The first wave on King was the 5th East Yorkshires and 6th Green Howards of 69th Brigade, assisted by amphibious DD tanks of the 4th/7th Dragoon Guards. The 7th Green Howards landed at 08:20. The original plan called for the 38 DD tanks to be launched from their landing craft tank about 5,000 yards (4,600 m) out. Due to extremely choppy seas, they decided to run the tanks directly onto the beach. Infantry, engineers, and DD tanks arrived almost simultaneously. Units disembarking onto the beach immediately came under fire from the casemated 88 mm gun at La Rivière, and the infantry were forced to take cover behind the sea wall. The gun was taken out when a flail tank of the Westminster Dragoons fired a charge directly into its aperture. The 5th East Yorkshires, supported by several tanks, spent the rest of the morning clearing out the heavily fortified houses of La Rivière, at the loss of 90 men, including six officers.

HIS WHAT DO YOU DO WHEN YOU LAND, D-DAY LANDING CARD: “

orders for landing invasion d day” card. “HI TROOPS, WHAT TO DO WHEN YOU LAND: On orders of OC transit area, to leave transit area go to ASSEMBLY AREA: WEST/ EAST, SECTION: TENNYSON/ KEATS, ON ORDERS TO LEAVE ASSEMBLY SEC/ SUB SEC GO TO TROOP AREA”. Then after the successful take over of the beaches there is a small field service post card letting his wife know he is ‘quiet well’ dated 10th June 1944. And then later on almost a week before the15th July 1945 he was wounded somewhere in northwest Europe, In which he was sent back to England to recover in hospital.