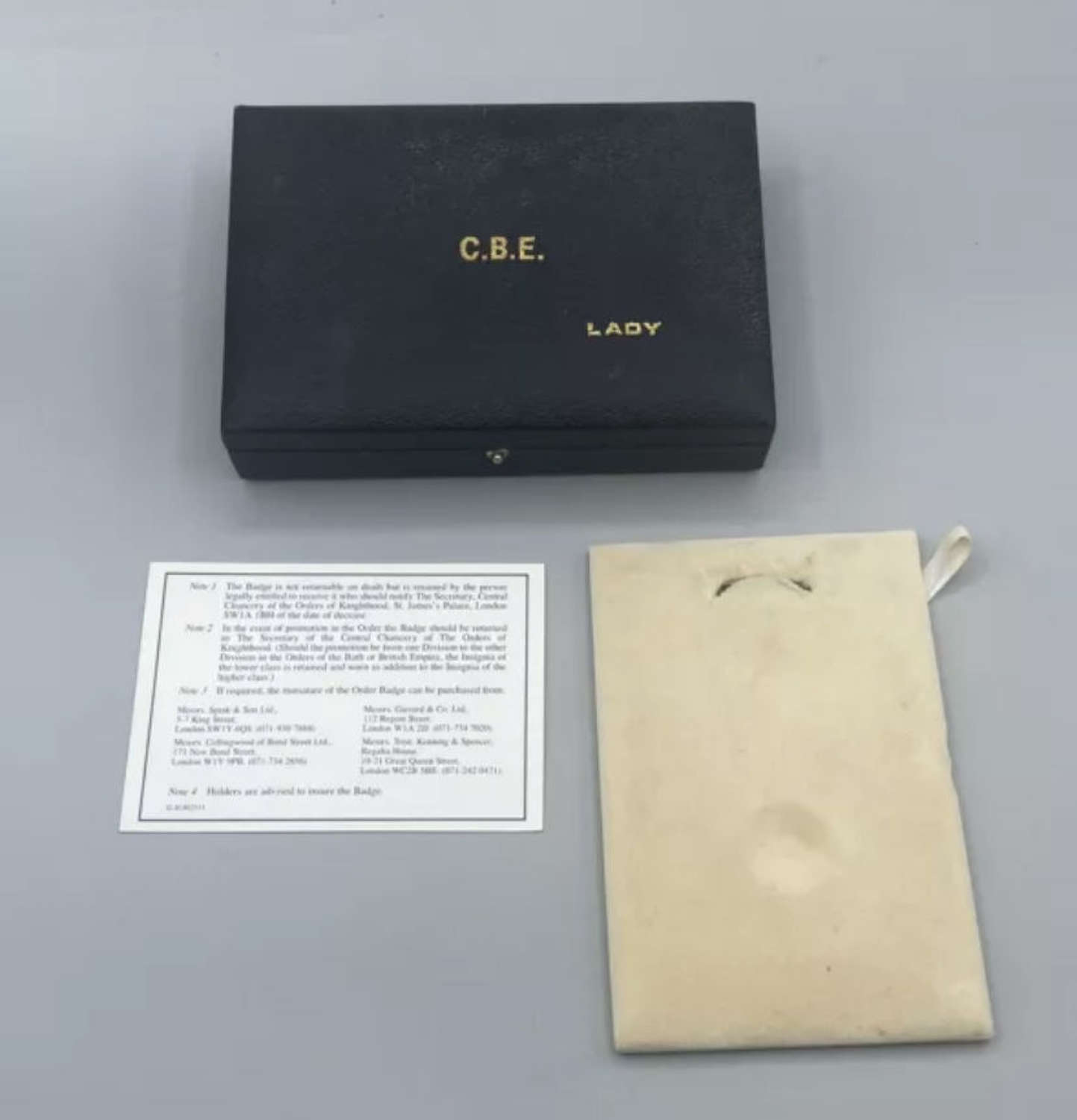 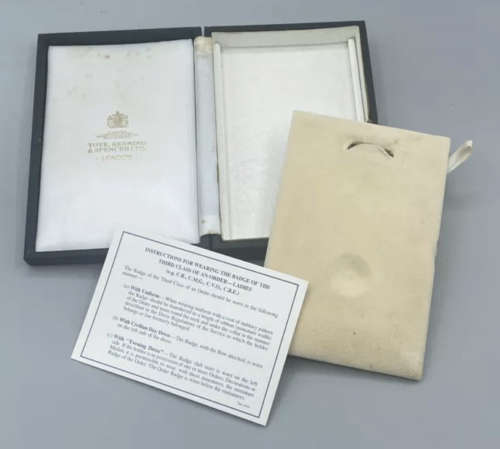 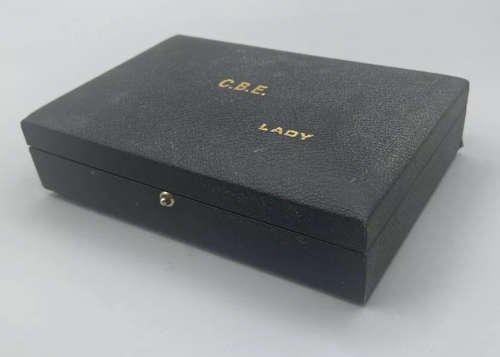 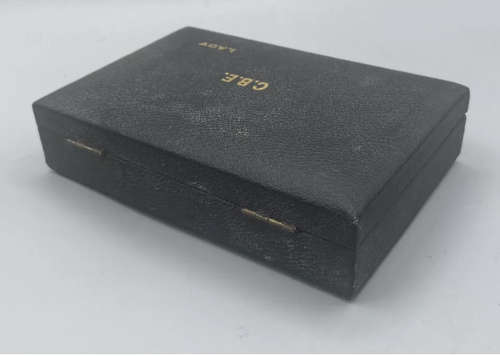 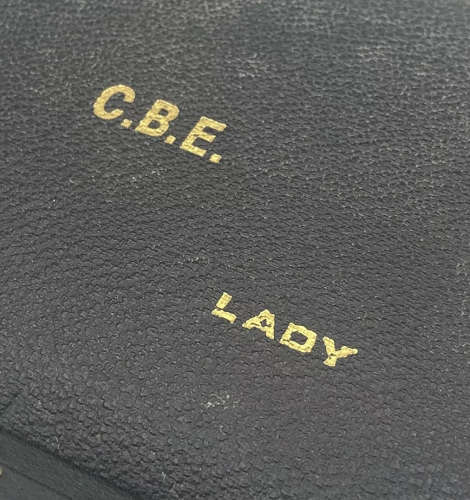 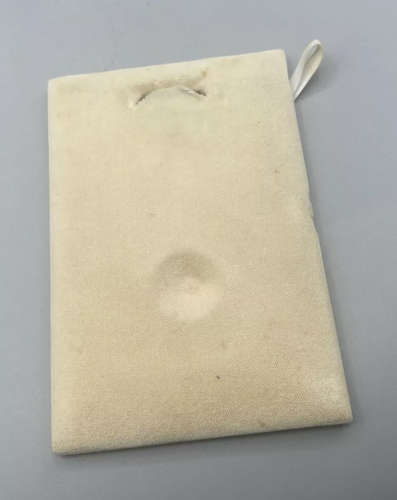 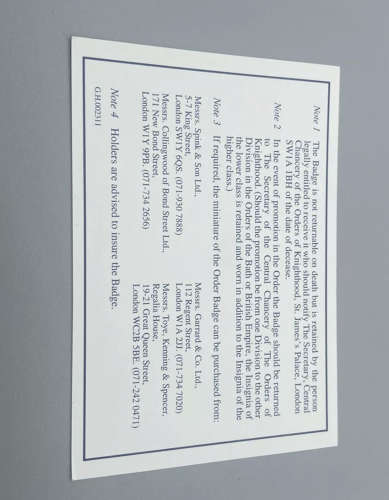 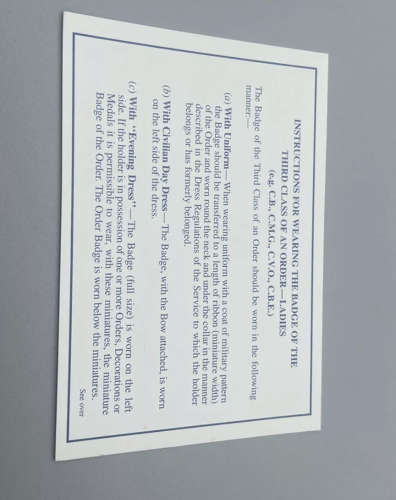 For sale is a post WW2 ,commander of the most Excellent Order of the British Empire CBE Lady Medal Box, issue card, and medal mount. This medal box is of great quality and good weight made by Toye Kenning & Spencer LTD London, By appointment to her Majesty the Queen suppliers of gold and silver laces insignia and embroidery. The presentation box is of great quality and weight and is a 19503 original piece. Inside the presentation mount of the box is a double sided card that states:

INSTRUCTIONS FOR WEARING THE BADGE OF THE THIRD CLASS OF AN ORDER – LADIES (eg CB, CMG, CVO, CBE) The Badge of the Third Class of an Order should be worn in the following manner: - (a) With Uniform – When wearing uniform with a coat of military pattern the badge should be transferred to a length of ribbon (miniature width) of the order and worn round the neck and under the collar in the manner described in the Dress Regulations of the Service to which the holder belongs or has formerly belonged. (b) With Civilian Day Dress-The Badge, with the Bow attached, is worn on the left side of the dress. (c) With "Evening Dress" - The badge (full size) is worn on the left side. If the holder is in possession of one or more orders, decorations or medals it is permissible to wear, with these miniatures, the miniature badge of the order. The Order Badge is worn below the miniatures. See over

Note 1 The Badge is not returnable on death but is retained by the person legally entitled to receive it who should notify The Secretary, Čentral Chancery of the Orders of Knighthood, St. James's Palace, London SWIA IBH of the date of decease. Note 2 In the event of promotion in the Order the Badge should be returned to The Secretary of the Central Chancery of The Orders of Knighthood. (Should the promotion be from one Division to the other Division in the Orders of the Bath or British Empire, the Insignia of the lower class is retained and worn in addition to the Insignia of the higher class.) Note 3 If required, the miniature of the Order Badge can be purchased from: Messrs. Spink & Son Ltd., 5-7 King Street, London SW1Y 6QS. (071-930 7888) Messrs. Garrard & Co. Ltd., 112 Regent Street, London W1A 2JJ. (071-734 7020) Messrs. Collingwood of Bond Street Ltd., 171 New Bond Street, London W1Y 9PB. (071-734 2656) Messrs. Toye, Kenning & Spencer, Regalia House, 19-21 Great Queen Street, London WC2B 5BE. (071-242 0471) Note 4 Holders are advised to insure the badge. G.H.002311

What is a CBE?

The CBE is awarded to individuals for having a prominent role at national level, or a leading role at regional level. CBEs are also awarded for distinguished and innovative contribution to any area.

Famous people who have a CBE

Here are some notable people to receive the CBE from The Queen:

This presentation case and inners is guaranteed original or money back. The is just the box and not the medal unfortunately I do not have this.