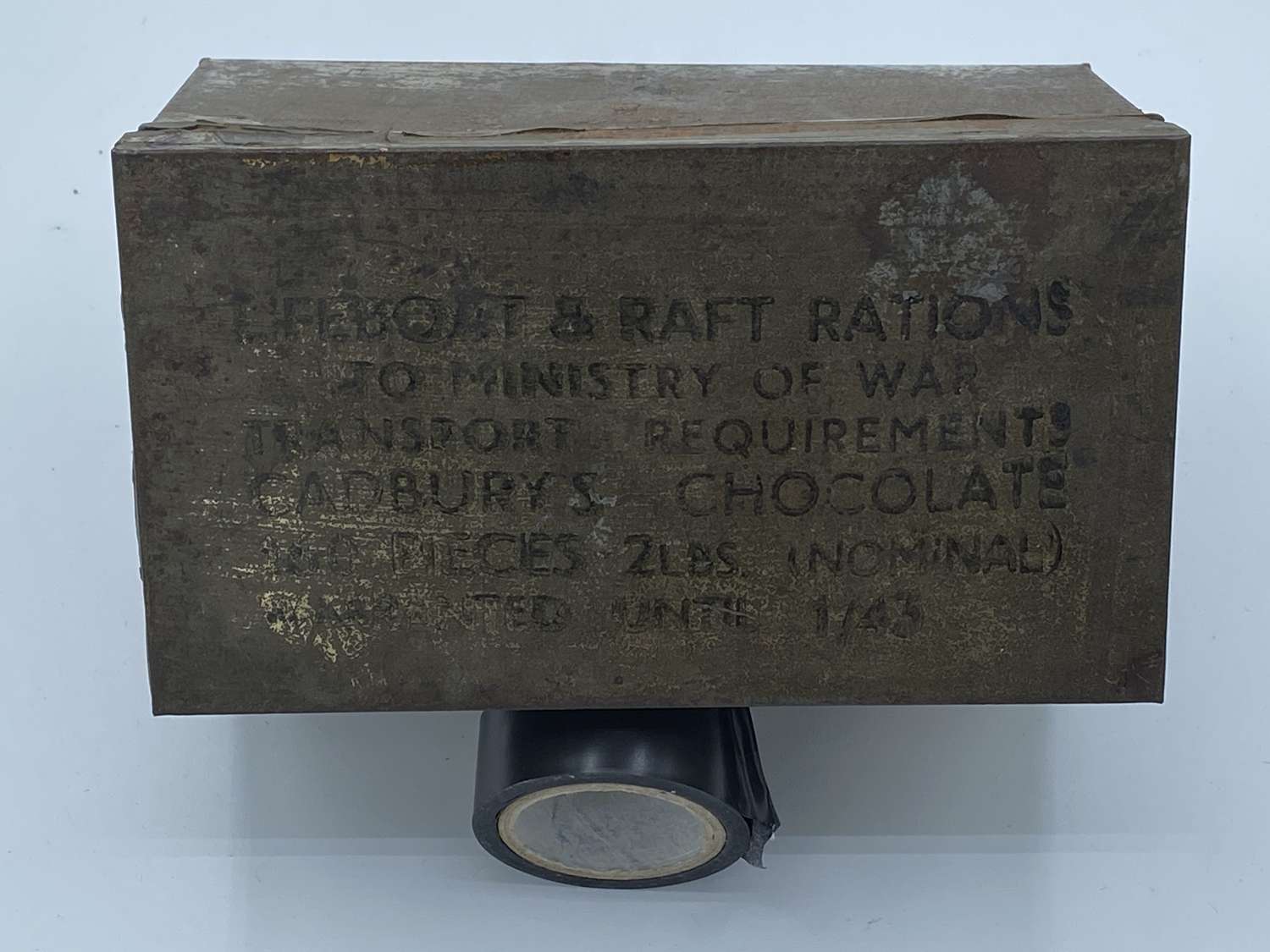 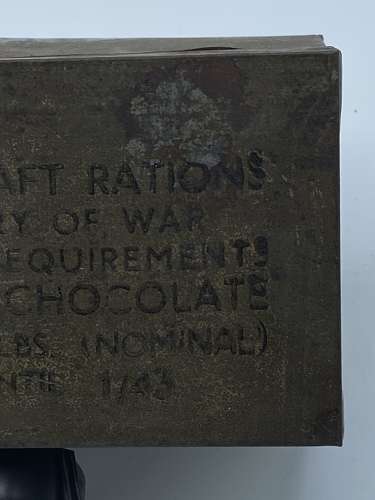 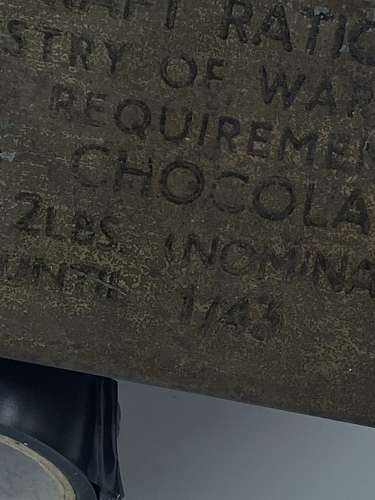 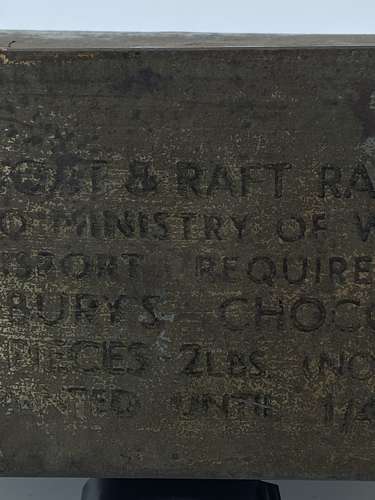 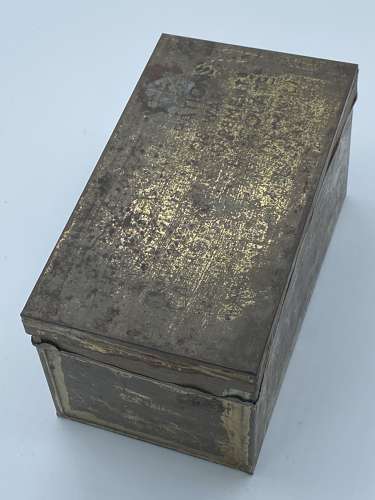 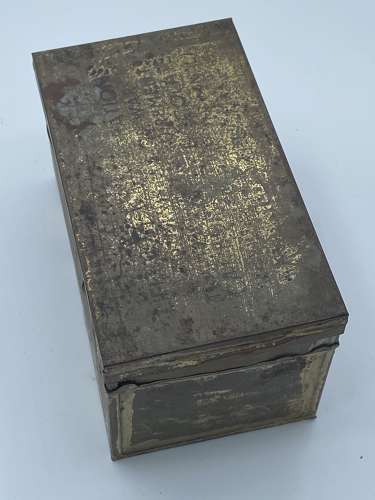 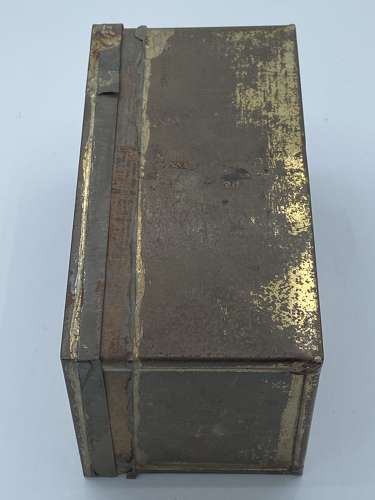 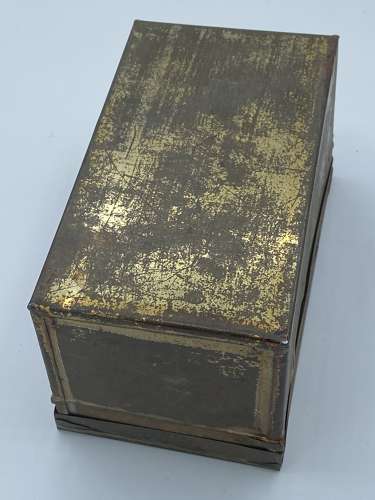 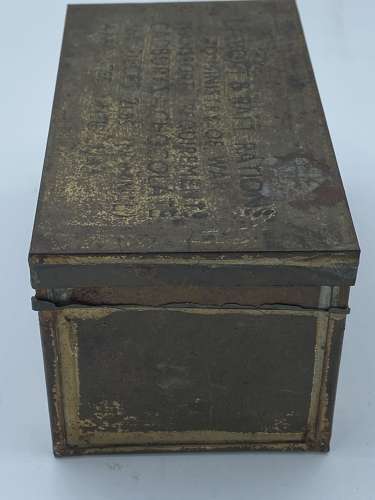 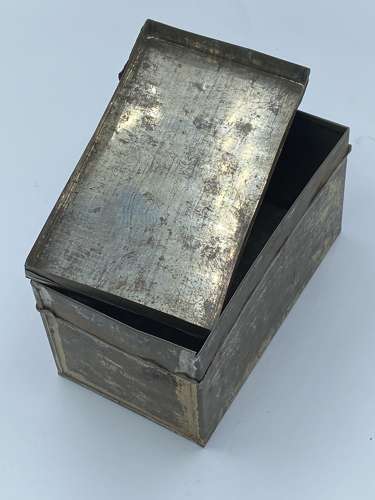 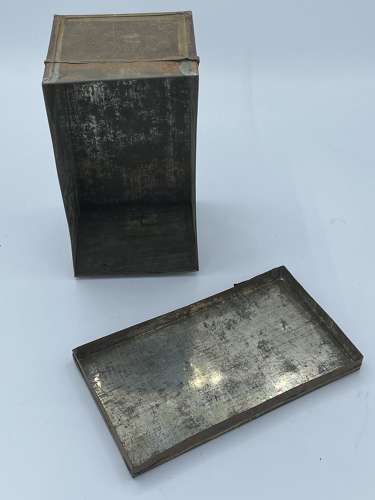 £120.00 Approx $149.81, €141.84, £120
(1 in stock)
Qty
For sale is a very rare WW2 1943 Dated Ministry of War Transport cadburys chocolate 160 pieces 2 LBS ration tin. The front of the tin reads in black ink: “Lifeboat and raft Russians to Ministry of for transport requirements Cadburys chocolate 160 pieces to LBS (nominal) warranted until 1/43”. The tin is in good condition just faded with the seal broken, and missing contents. This ration tin measures height with lid on 7.9cm x length 14.8cm x 8.3cm x material thickness 1.6mm x lid depth 1.19cm. This ration tin would be found on board each of her majesties coast guards life vessels. There role during WW2 was search and rescue, saving aircrew that had parachuted out of planes, sunken ships submarines and water vessels crew that had gone into the water, distress calls etc. A true story of one of the rescue missions carried out by her majesties Coast Guard is the following:
The loss of an aircrew involved in a daring mission over Nazi-occupied Europe during World War II were commemorated yesterday (Sunday 15th December) to mark the 75th anniversary of the tragedy. All ten crew members of a US liberator bomber, nicknamed 'The Jigs Up', were forced to flee the aircraft due to lack of fuel and engine trouble while the plane attempted to land in atrocious weather conditions at RAF Valley in Anglesey in 1944. Eight of the 10 airmen on-board died after parachuting out of the aircraft in complete darkness. They had hoped to land near the North Stack Lighthouse, off the north-west coast of Anglesey, but sadly ⁠– the men landed in the sea and had no flotation devices or life-jackets with them. The pilot and co-pilot on-board were able to leave the aircraft before it crashed, next to the shoreline. Holyhead Coastguard Rescue Team were joined by Rhoscolyn and Cemaes Bay teams in the search for the missing men, which lasted three days and nights. Incredibly, the pilot and co-pilot survived and were rescued.
Some history on the ration tin and the ministry of war transport is as followed:
The Ministry of War Transport (MoWT) was a department of the British Government formed early in the Second World War to control transportation policy and resources. It was formed by merging the Ministry of Shipping and the Ministry of Transport, bringing responsibility for both shipping and land transport to a single department, and easing problems of co-ordination of transport in wartime. The jurisdiction of the MoWT covered all forms of transportation and it inherited numerous and varied responsibilities from its parent organisations. From the Ministry of Shipping these included: Allocation of Tonnage Division, Ship Management Division, Coal Division, Coasting and Short Sea Shipping Division, Commercial Services Division, Foreign Shipping Relations Division, General (Shipping) Division, Liner Division, Sea Transport Division, Ship Management Division, Shipping Operations Control Division, Tanker Division, War Risks Insurance Office.
From the Ministry of Transport it inherited responsibility for all of Britain's roads, railways, canals and ports, and included: Railways Division, Railway Inspectorate, Road Transport Division, Highways Division, Highway Engineering Division, Road Haulage Organisation and her majesties Coast Guard.
Her Majesty's Coastguard was under the control of the Admiralty from May 1940, but was placed under MoWT control in October 1945.
Her Majesty's Coastguard (HMCG) is a section of the Maritime and Coastguard Agency responsible, through the Secretary of State for Transport to Parliament, for the initiation and co-ordination of all maritime search and rescue (SAR) within the UK Maritime Search and Rescue Region. This includes the mobilisation, organisation and tasking of adequate resources to respond to persons either in distress at sea, or to persons at risk of injury or death on the cliffs or shoreline of the United Kingdom.
This is a great piece of history, and the rations in this tin may have been used to feed a starving aircrew mans life after parachuting from a burning aircraft into a ice cold ocean! If only objects could talk! Guaranteed original or money back guaranteed. This will be sent special and dispatched within two to three working day’s.