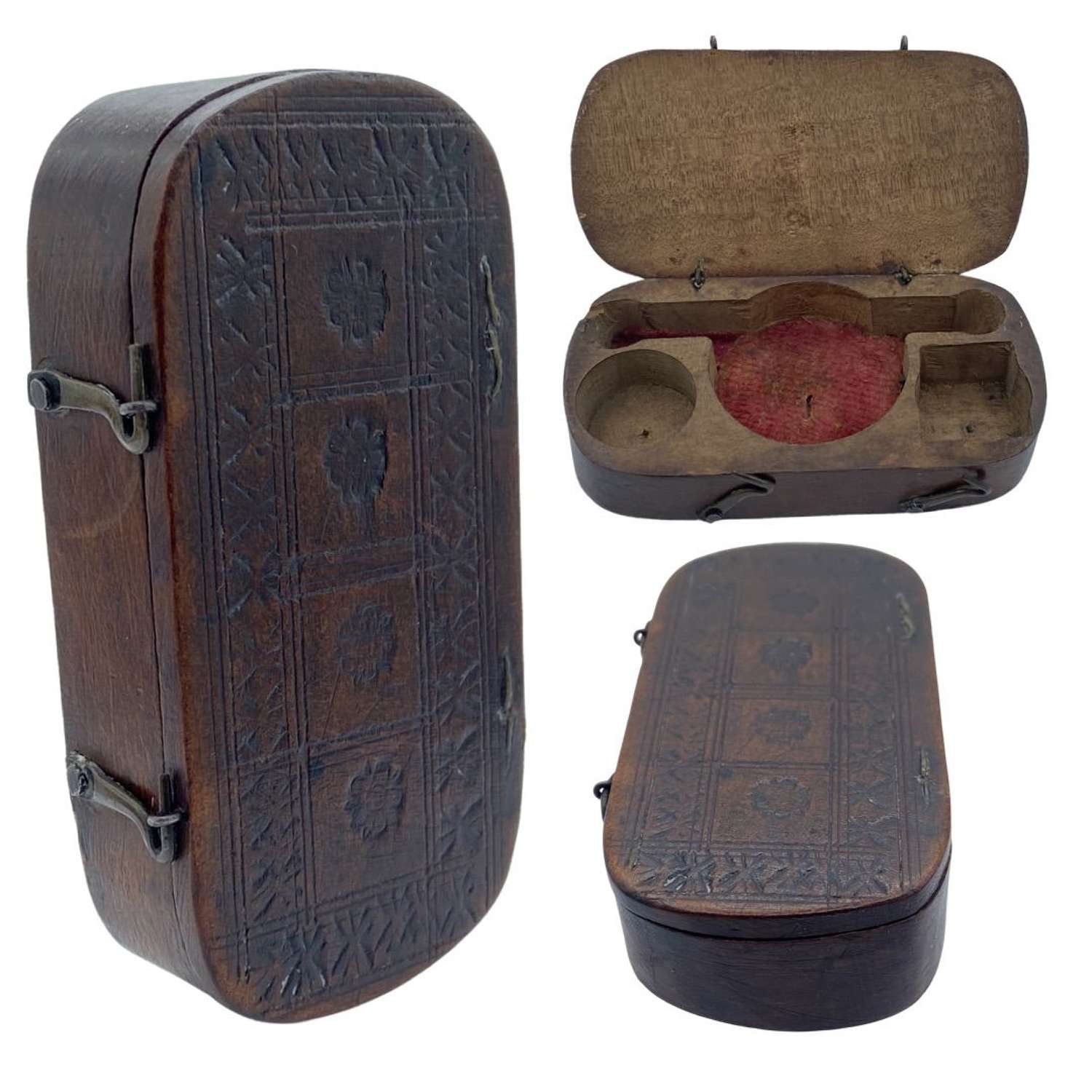 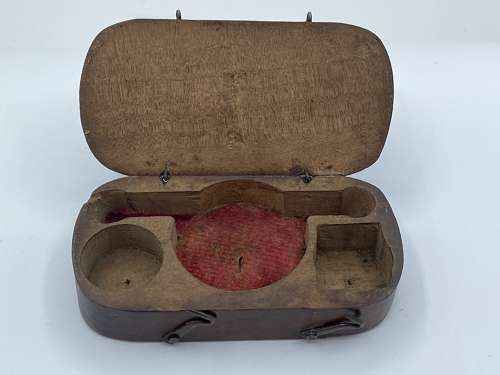 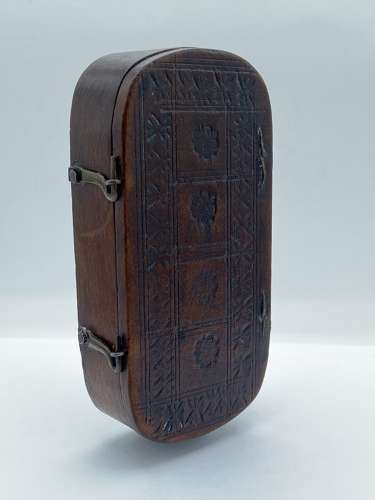 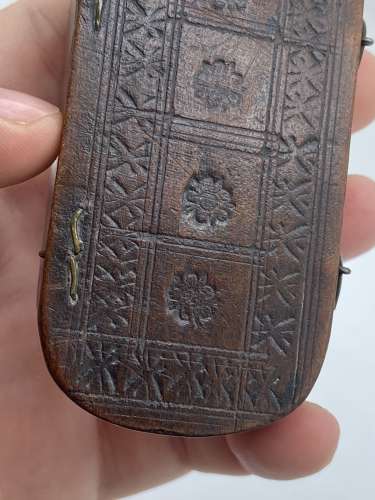 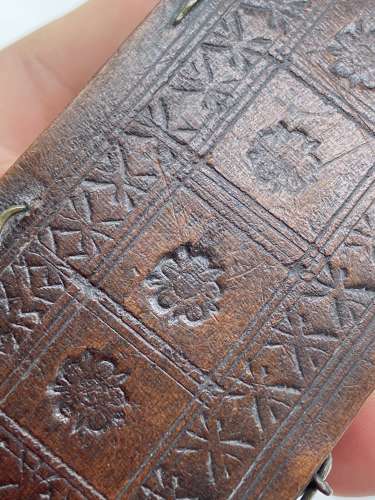 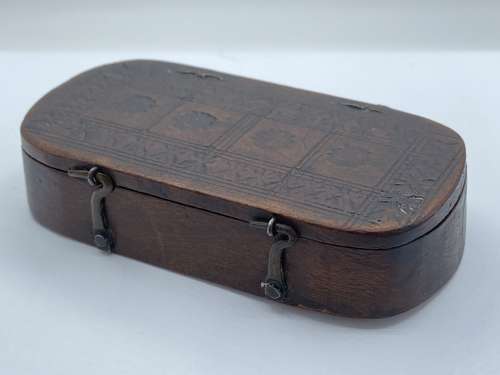 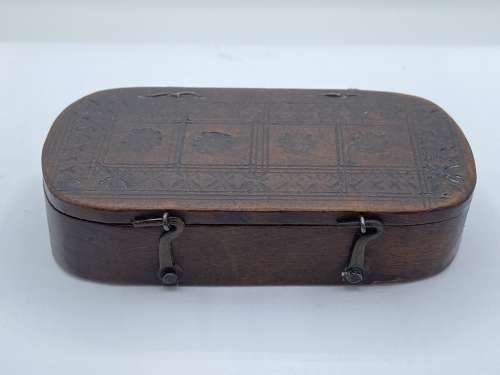 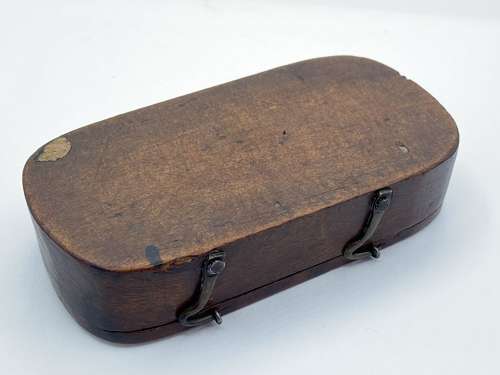 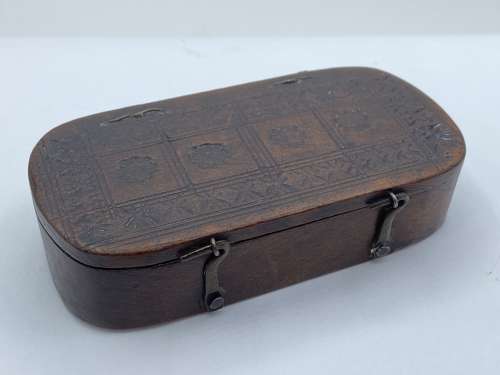 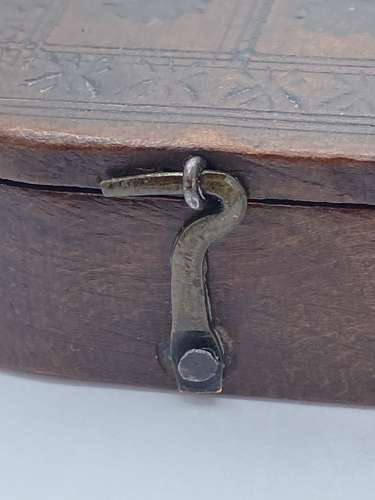 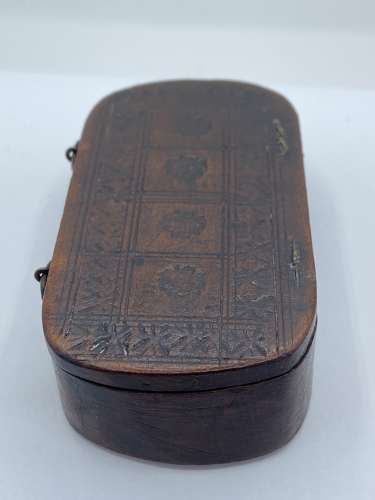 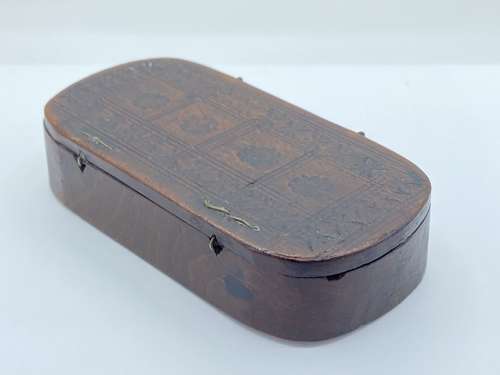 POA
(1 in stock)
For sale is an Original Beautiful Antique 17th Century Merchant’s Coin Pocket Scales Wooden Tudor Rose Carved Box. The beautiful carved wooden case is crudely decorated with four Tudor roses and a stippled cross hatched border. This exceptional piece measure 8.6cm in length x 4.4cm width x 1.9cm in height.
The authorities in Shakespeare’s England faced the persistent problem of criminals clipping metal from coins and passing them off at face value. In the 16th and 17th centuries, special kits like this one were made to prevent and expose this practice. This carved wooden case, made in England in c. 1620, unfortunately the brass scales and a set of weights to gauge if coins are heavy enough are missing, however this rare case still has its original bronze hook and eye catches, hinges in excelled condition and carved cut out scale spaces are still lined.
Scales as a symbol of justice; Scales also symbolise the idea of justice and the fair weighing of evidence. Justitia, the Roman goddess of justice, is often represented with a balance in her left hand and a double-edged sword in her right, to suggest her judicial powers. The goddess is sometimes blindfolded to symbolise blind justice or impartiality.
Money and justice in The Merchant of Venice
These ideas of financial greed, precise weights and the power of justice come together in the court scene (4.1) of The Merchant of Venice. Shylock, the moneylender, has made a bond with Antonio, the merchant, to extract a pound of Antonio’s flesh if he fails to repay 3,000 ducats. Antonio breaks the terms of the loan and Shylock demands ‘justice’ (3.3.8) even when he is offered money over the odds to show the merchant mercy.
But the idea of justice – symbolised by accurate weights – comes back to bite Shylock. Portia, disguised as a judge, insists that he should shed ‘no blood’ and cut neither ‘less nor more’ than a pound or he will be severely punished by law: ‘if the scale do turn / But in the estimation of a hair, / Thou diest, and all thy goods are confiscate’ (4.1.325; 330–32).
Examples of the rarity; Unfortunately today over 350 years late, these 17th century merchants coin pocket scales cases are exceedingly rare. There are several examples still around today; one of such can be found in the British museum Museum Number: W.3159, another similar one can be found under the sold section at Barney’s auctions house in which the scales and case sold for £2500.
This is an exceptionally rare carved wooden case for a  17th Century Merchant’s Coin Pocket Scales, which is in exceptional condition, with the original bronze catches and hinges in working order, along side the original lining of the case. Unfortunately there is a small chip to the back inside left section of the case so please see photos for more details.
This will be sent via special delivery and dispatched within two working days. Happy to send internationally also!