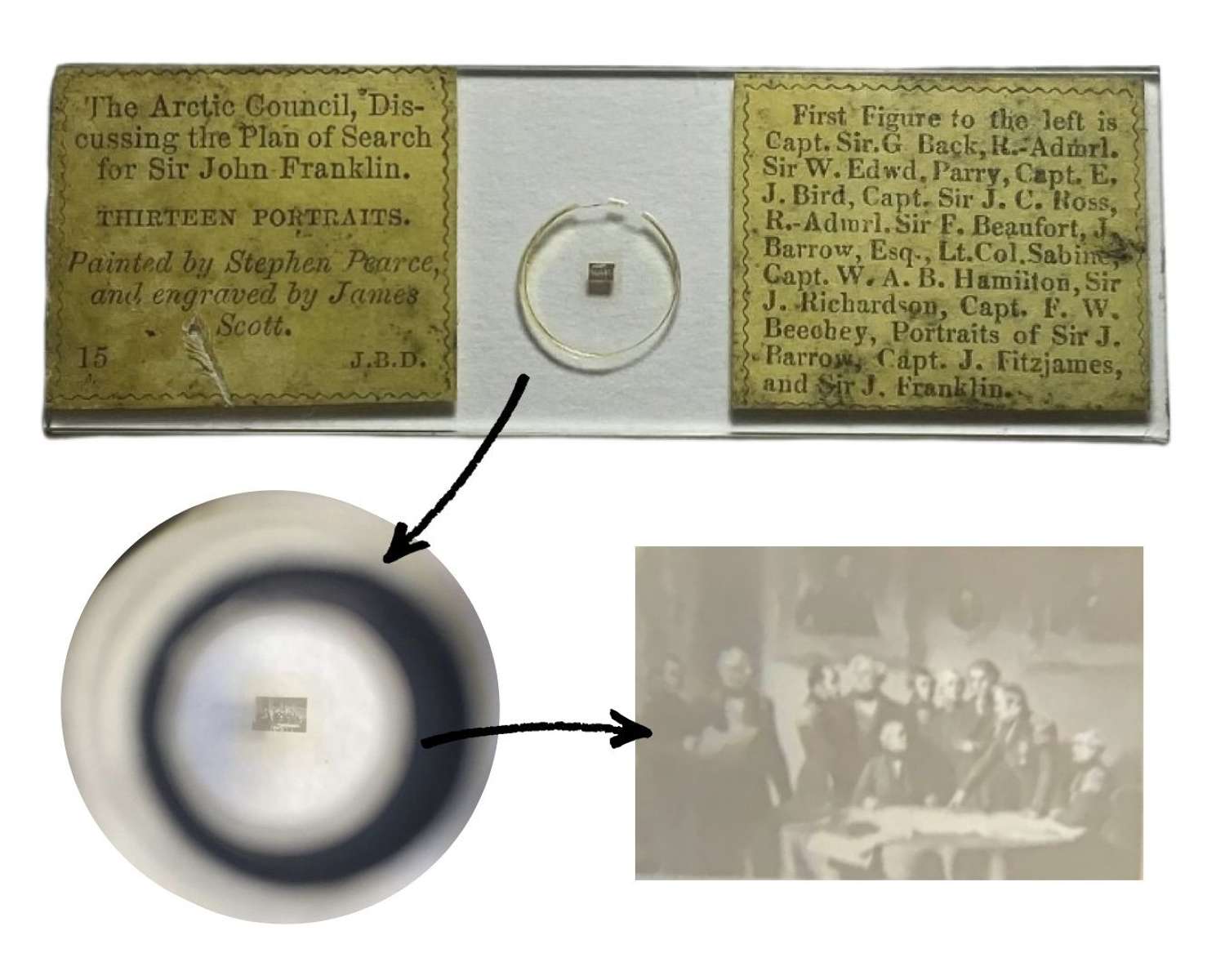 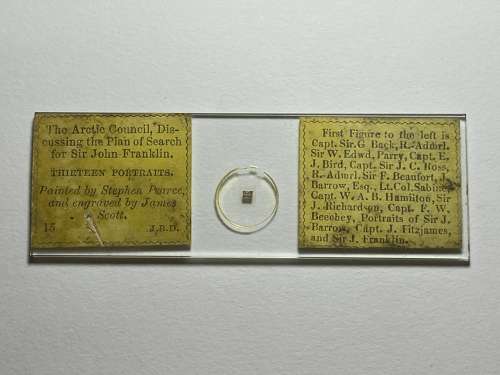 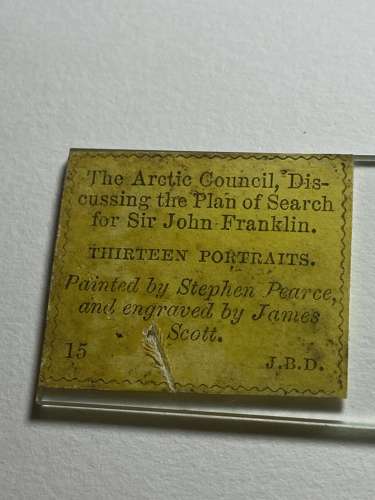 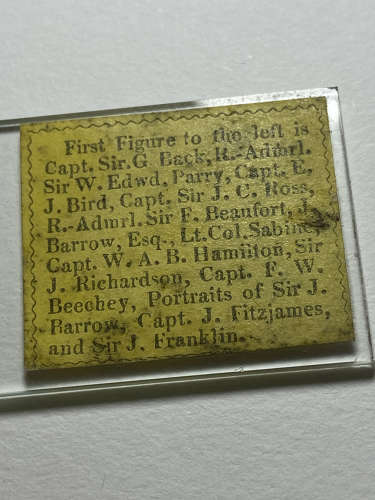 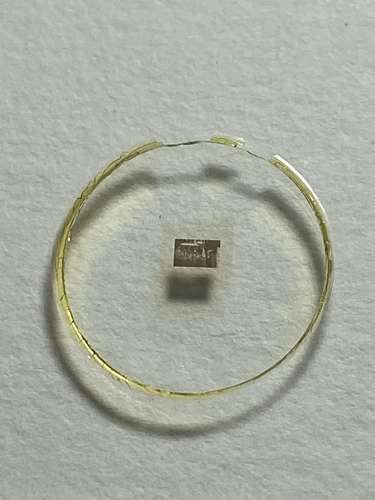 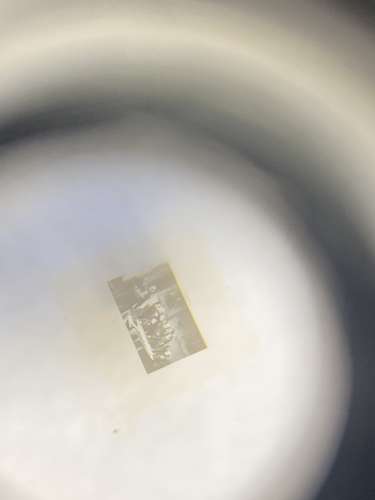 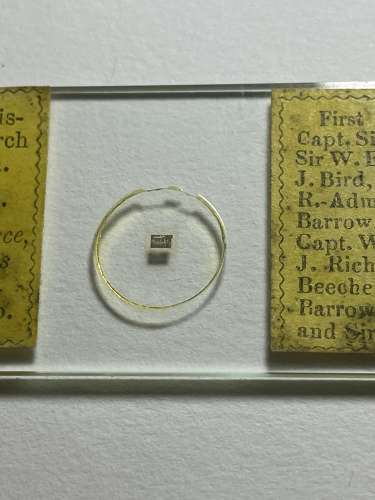 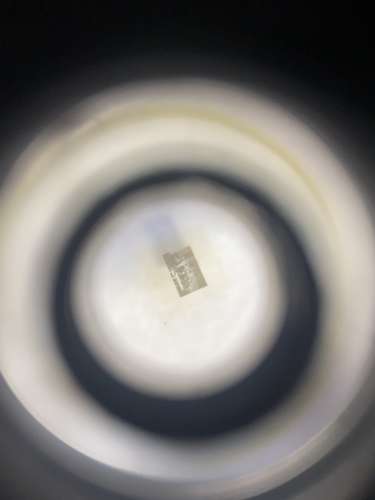 This image, manufactured by the noted nineteenth-century Manchester (England) optician/microscope maker/ and inventor of microphotographs, John Benjamin Dancer, is based on the 1851 painting by Stephen Pearce ( commissioned by Col. John Barrow, a Secretary at the Admiralty, and now in the National Portrait Gallery in London) entitled: "The Arctic Council Discussing the Plan of Search for Sir John Franklin." Depicted on the Pearce painting and Dancer's microscopic photographic slide image are Captain Bird, Sir Charles Ross, Sir John Richardson, Barrow and six others reviewing charts and plans around a table. An engraving of this painting was also published in 1853. This slide is 167 years old! A cracking piece of history and a great oddity!

History of the painting itself:

This group represents the officials, naval officers and explorers most active in the search for Sir John Franklin (1786-1847). An expedition, led by Franklin, was sent out by the Admiralty in May 1845 to try to penetrate a North-West Passage from the Atlantic to the Pacific Ocean. It consisted of two ships, HMS EREBUS and HMS TERROR. The ships were last seen on 26 July 1845 by a whaling ship from Aberdeen between Melville Sound and Lancaster Sound in Baffin's Bay.

In 1847 anxiety began to be felt about the fate of the expedition, as no news of it had been received, and the Admiralty, advised by the people represented in Pearce's picture, decided to organize a search. In 1848 three expeditions were sent out: one under Sir James Clark Ross and Captain Edward Bird; a second overland expedition under Sir John Richardson and Dr John Rae; and a third to Behring's Straits under Captain Henry Kellett and Captain Thomas Moore. No trace of Franklin or his party was found. More expeditions were organized in 1850, during which Captain Ommaney discovered traces of Franklin's first wintering station at Beechey Island. Although other expeditions were sent from England, both by the Admiralty and by Lady Franklin, it was not until 1854 that Dr Rae heard from the Eskimos of Boothia Felix that a party of about forty men had been seen off the coast of King William's Island, on their way to the Great Fish River, where they had all perished of starvation. Rae obtained relics of the ill-fated party from the Eskimos, and received the government reward of £10,000 for this discovery.

The Admiralty sent one more expedition to search for the remains of Franklin and his party, but it failed to reach King William's Island. Lady Franklin, however, was not satisfied that her husband was dead, and in 1857 she dispatched, at her own expense, the 'Fox' under Captain McClintock. This reached King William's Island, and discovered the last remains of Franklin and his men, together with a number of relics and a written record which established their fate.

This portrait does not depict an actual meeting, nor an official body, despite its full title, 'The Arctic Council Discussing a Plan of Search for Sir John Franklin'. It represents ten of the distinguished sailors and explorers on whom the Admiralty called for advice, when fears for Franklin's safety were first expressed in 1847. However, they did not constitute an official body, nor did they collectively organize the early search expeditions, though the reports which they submitted led directly to the expeditions organized by Ross and Richardson in 1848. The Admiralty continued to rely on the advice of these experts, which apparently was tendered individually. Barrow, who was one of the secretaries at the Admiralty and directly concerned in the search for Franklin, decided to commission a group portrait to commemorate the various search efforts; he chose Stephen Pearce as the artist, an old friend. The resulting group is a postscript to what had already been achieved, rather than a contemporaneous view of the various explorers at work.

This is guaranteed original or money back guaranteed. These will be sent via 1st class signed for and dispatched within two to three working day’s.