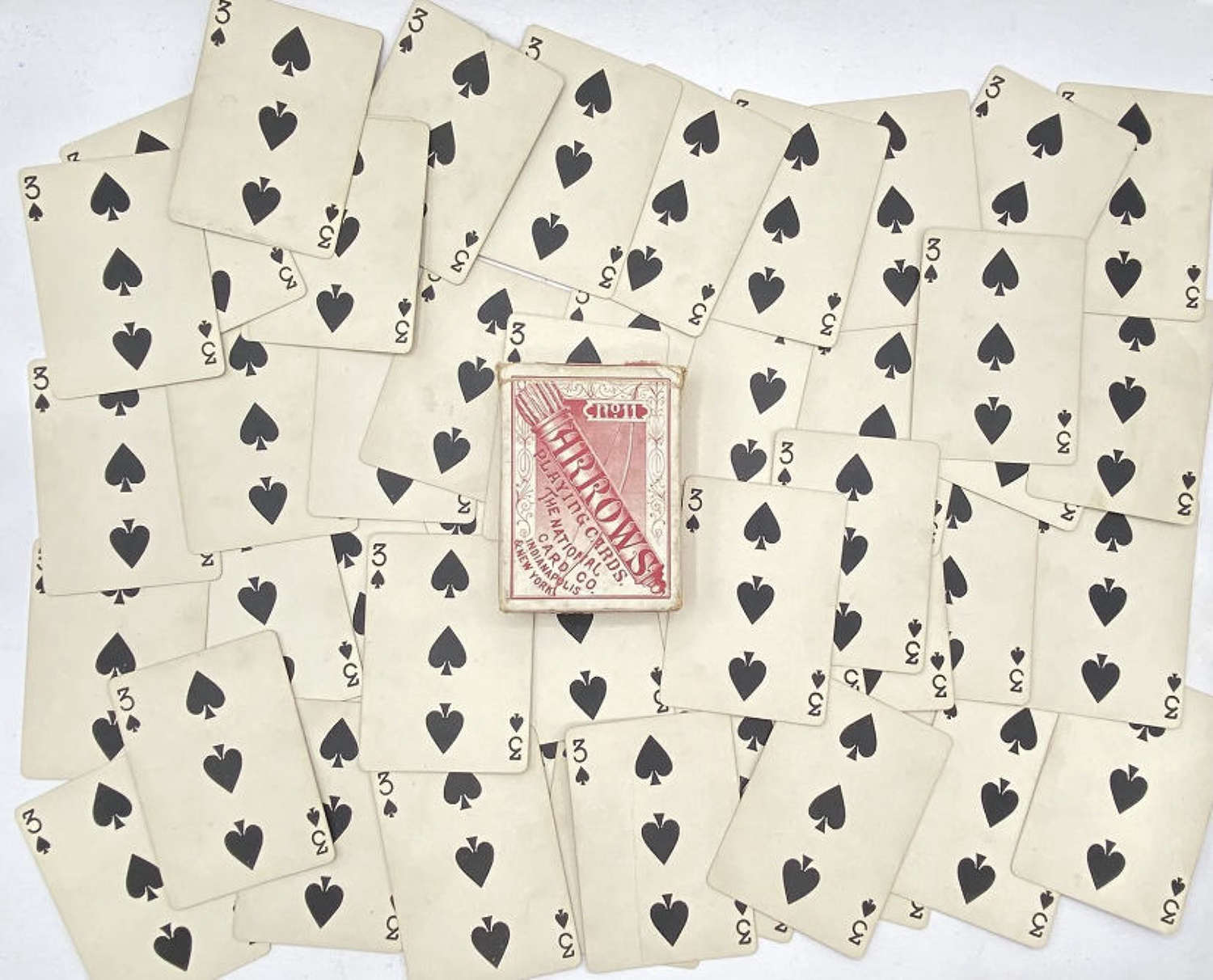 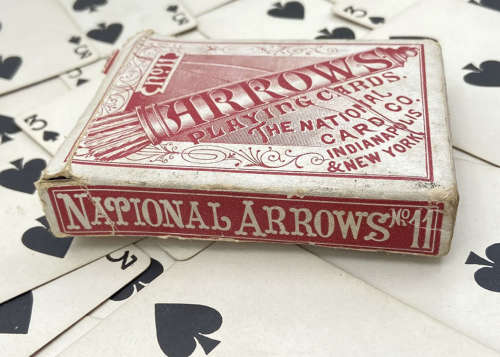 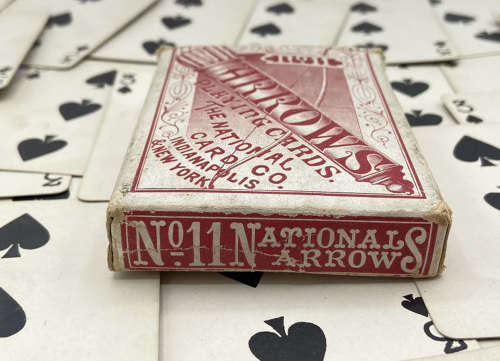 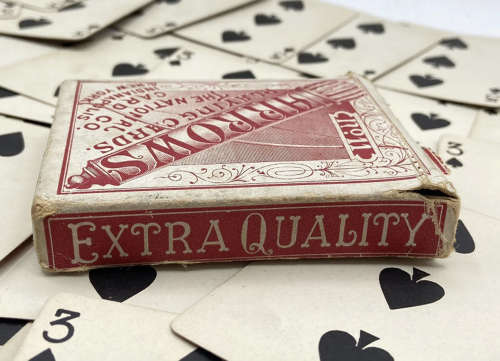 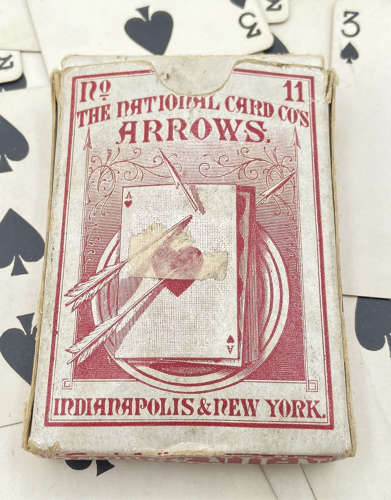 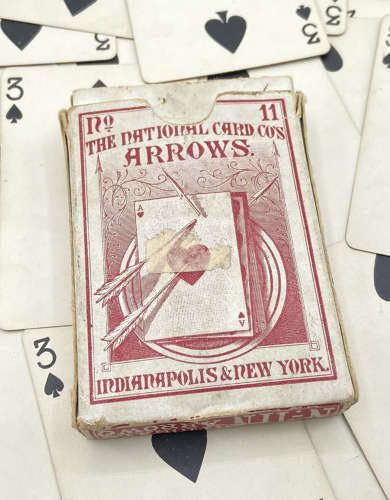 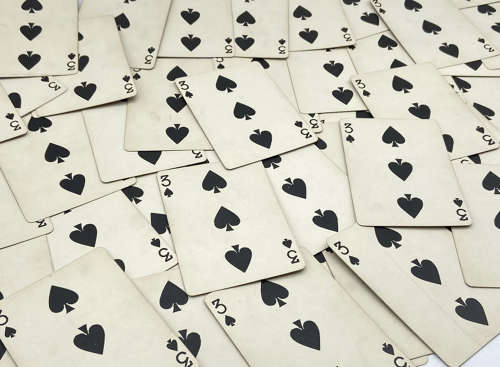 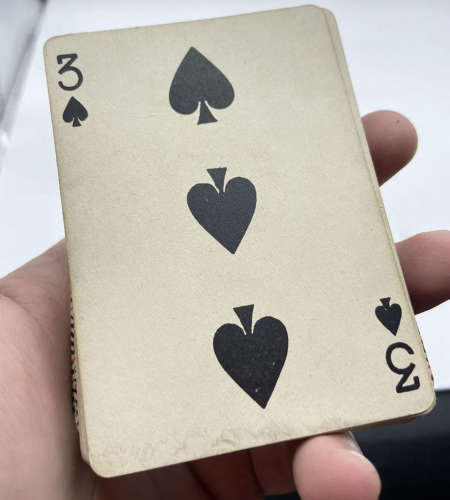 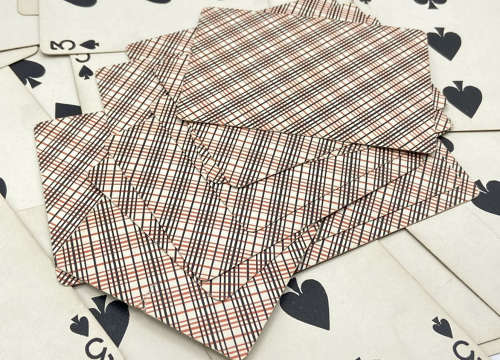 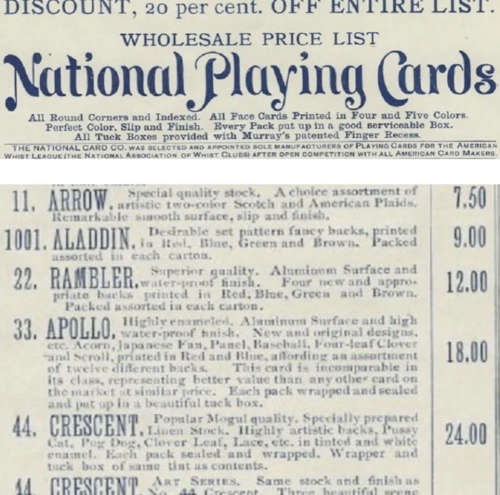 For sale is an exceptionally rare set of Circa 1892 national card company complete set of Magicians Conjuring playing cards, however the most unusual part of this set is that every cars is black 3 of Spades. The cards packing state “No.11 Arrows Playing Cards The National Card Co Indianapolis & New York.”

This pack of cards you are bidding on is the No. 11 Arrows American Plaid Playing Cards manufactured by the National Card Co Indianapolis & New York.

These are magicians Conjuring cards due to this being a complete set of 52 cards, but all of the same value card of 3 spades. This rare set comes with the original packaging too. Unfortunately one of the cards has a rip in it but apart from that the set is mint.

History of this set of cards and their company:

"The National Card Co." is Trademarked.

To Make Playing Cards and Stationery

Several months ago the plant of the old Shaw Carriage Works was purchased by an Eastern company, and recently a large amount of new machinery has been put into it. The firm is the “National Card Company of Indianapolis and New York,” and here is the point where the goods are to be manufactured. Playing cards and fine stationery will be the products of the establishment. Robert H. McCutcheon, of New York, is President, and A. Crusius, of the same place, Secretary of the company and Samuel J. Murray, of Cincinnati, will be Superintendent when, in a few weeks, business begins.

The National Card Company's factory at Indianapolis has already placed on the market its “Steamboat " cards and will soon issue its higher grade goods. The "Steamboat" series is declared by good judges to be a superior card of its kind, the smoothness, pliability and strength being specially noticeable. Moreover, the colors are fresh and harmonious, while the backs and general finish will make these cards popular and acceptable to the average player.

The first train car load (125,000 packs) of the National Card Company’s first cards leave Indianapolis for Chicago. Also advertised are the two card back designs for “Rambler”. A Maltese Cross pattern and a Pyrotechnic pattern called"Geometric". (The Rambler was not trademarked until May 10, 1892 by R. H. McCutcheon).

As an instance of growth the National Playing-card Company was organized four years ago, and began operations in part of the four-story building on Gatling street, employing in the beginning twenty-two persons. The pay-rolls on Saturday showed 453 people now employed, about 60 per cent of them women, and the production of the works is now 23,000 packs per day. There are thirty-five grades of cards which the company manufactures. The principal difference being in the backs of the cards. The card they manufacture has taken precedence of all other cards manufactured in this or foreign countries.