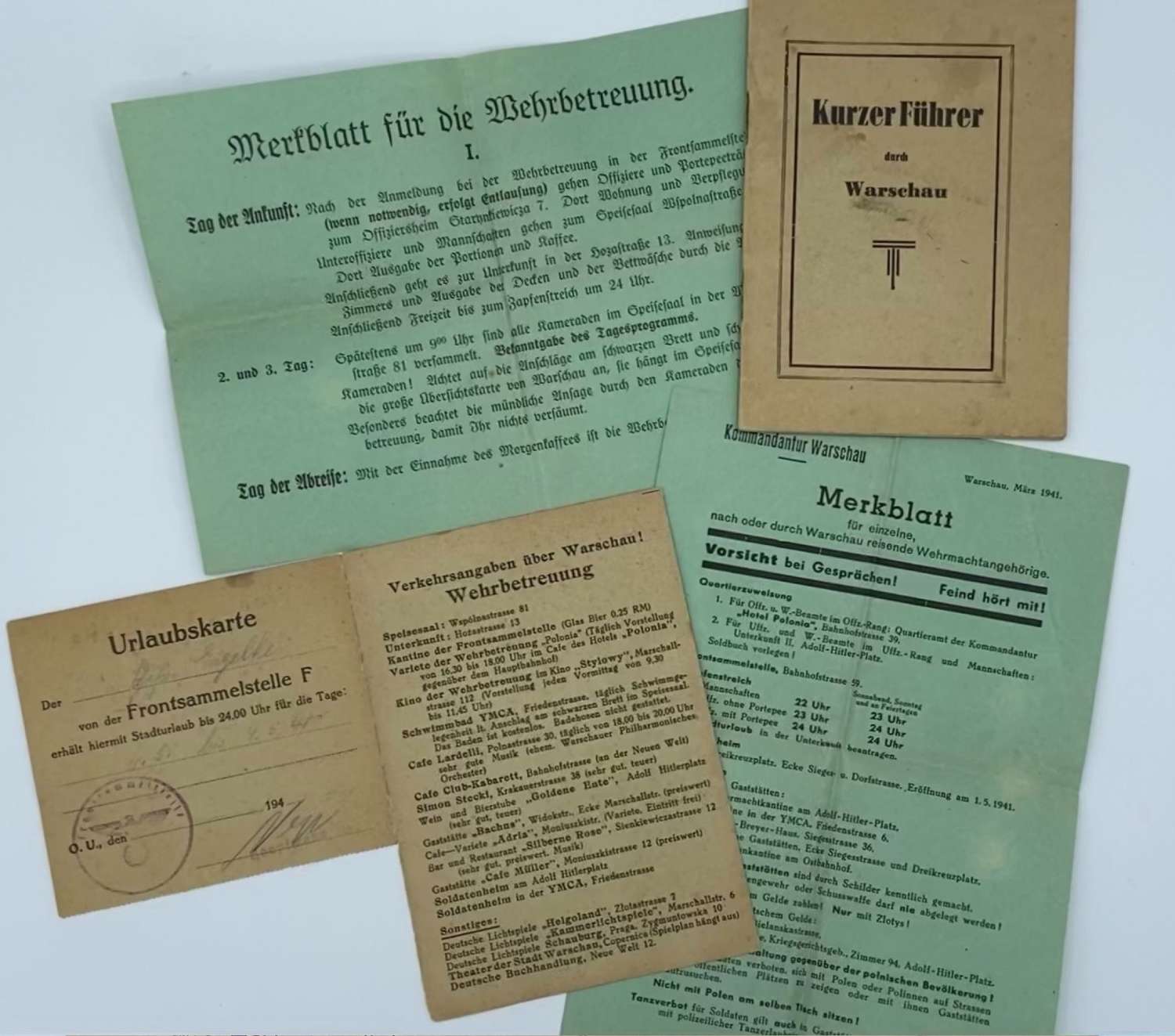 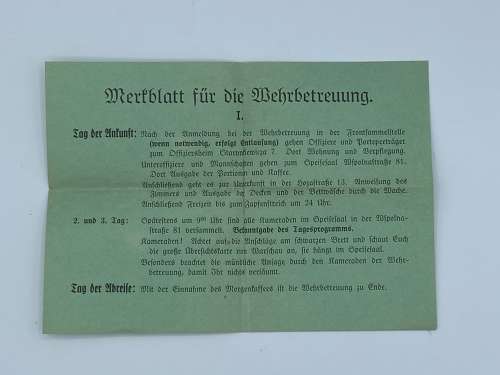 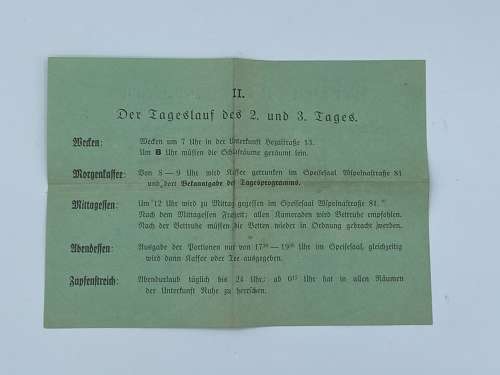 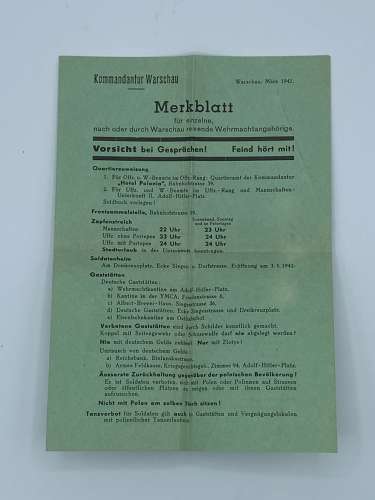 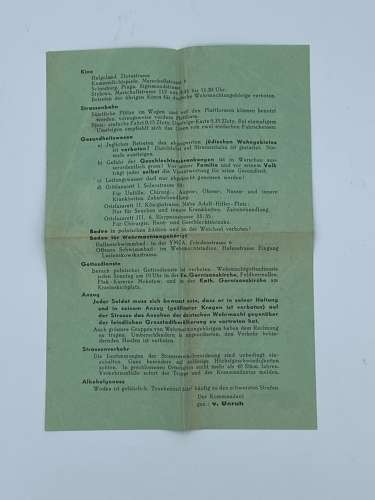 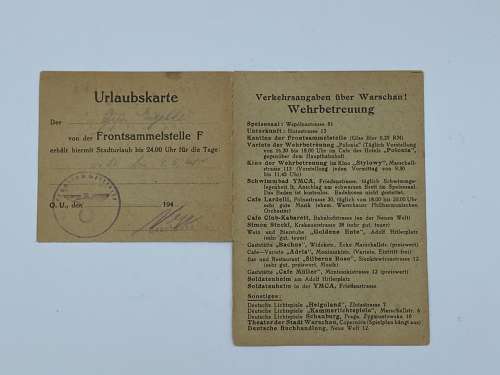 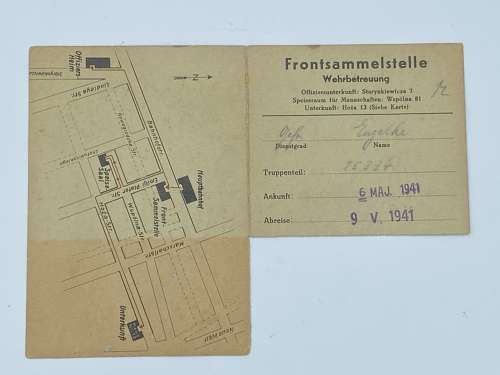 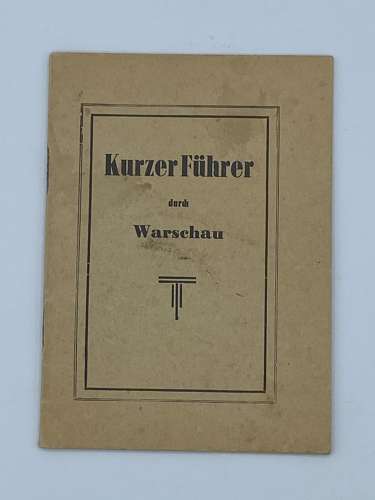 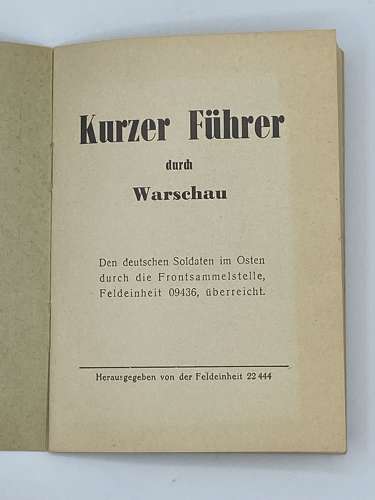 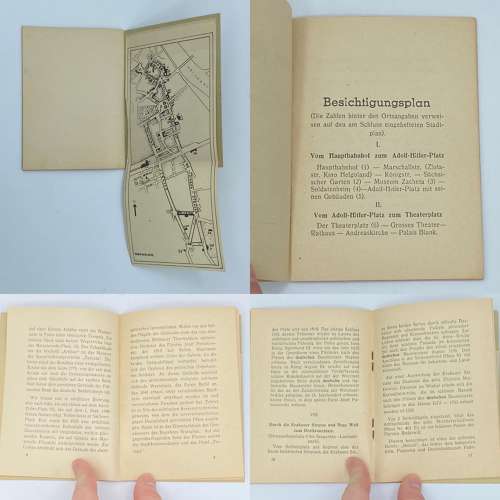 For sale is a Rare WW2 German Wehrmacht Paperwork Stationed In Warsaw 1941. In this lot are four pieces of paperwork, a 1941 dated german guide to Warsaw, March 1941 Warsaw Headquarters Information sheet for individual members of the Wehrmacht traveling to or through Warsaw green leaflet, 1941 dated Warsaw vacation card and a 1941 Leaflet for military support Day of arrival green sheet. These are incredibly rare documents! (These will be sent via special delivery and dispatched within two to three working day’s) guaranteed original or money back. Rough translations are below:

Warsaw, March 1941. Warsaw Headquarters Information sheet for individual members of the Wehrmacht traveling to or through Warsaw.  Be careful with conversations!  Enemy hears with!  Allocation of quarters.  For officers and  Off-ranked civil servants: Quartieramt der Kommandantur "Hotel Polonia", Bahnhofstrasse 39. - For Uffz. And civil servants of the Uffz. Rank and teams: Accommodation II, Adolf-Hitler-Platz. Present paybook!  , Bahnhofstrasse 59.Saturday, Sunday and public holidays Zapfenstreich teams Uffz. Without Portepee 11 p.m. Uffz, with Portepee apply for a city holiday in the accommodation. 10 p.m. 11 p.m. 12 p.m. midnight 12 p.m. Soldiers' home on Dreikreuzplatz, corner of Siefes, i. Dorfstrasse. Opening  on 1.5, 1941. Restaurants German restaurants: a) Wehrmacht canteen at Adolf-Hitler- Platz, b) Canteen in the YMCA, Friedenstrasse 6, c) Albert-Breyer-Haus, Siegestrasse 36, d) German restaurants, corner of Siegesstrasse and Dreikreuzplatz,  e) Railway canteen at the Ostbahnhof. Prohibited restaurants are indicated by the signs. Belt with side rifle or firearm must never be removed! Never pay with German money Only with zlotys! Exchange of German money a) Reichsbank, Bielan  skastras b) Army field treasury, Kriegsgeriatsgeb., room 94, Adolf-Hitler-Platz.  Extreme restraint towards the Polish population!  It is forbidden for soldiers to show up with Poles in the streets or in public places or to go to restaurants with them.  Don't sit at the same table with Poles!  Dancing for soldiers is also prohibited in restaurants and entertainment venues with a police license to dance.

Cinema Helgoland.  Zlotastrasse Kammerlichtspiele, Schauburg.  Praga.  Sigismundstr until 11.30 a.m.  Stylowa, Marschallstrasse 112 banned by 15 members of the armed forces.  All seats in the car and on the platforms can be used. It is recommended to use two single tickets.  a) Entering the closed-off Jewish residential area at any time. Entering the other cinemas for the tram Price: one-way trip 0.15 zloty, ase card 0.35 zloty.  In the case of one-time, preferably front is prohibited!  Driving through on the tram is permitted, but b) There is a risk of sexually transmitted diseases in Warsaw.  Family and in front of his people take responsibility for his own health c) Tap water may only be boiled!  d) Local hospital I, Solecstrasse 93: For accidents, surgical, eye, ear, nose and internal diseases, dental treatment.  Local hospital II. Königsstrasse, near Adolf-Hitler-Platz: 1. Epidemics and internal diseases.  Dental treatment.  III.  6. Sierpniastrasse 33/35: Local hospital for surgery, skin and sexually ill people.  Bathing in Polish baths and in the Vistula is prohibited!  Swimming for members of the Wehrmacht Indoor swimming pool: in the YMCA, Friedenstrasse 6 Open swimming pool: in the Wehrmacht Stadium, Hafenstrasse entrance at Lazienskowskastrasse.  Church services Attending Polish services is prohibited, Wehrmacht services every Sunday at 10 a.m. in the Ev.  Garrison Church, Feldherrnallee.  Flak barracks Mokotow, and in the Catholic Garrison Church on Krasinskichplatz.  Suit Every soldier must be aware that he has to represent the reputation of the German Wehrmacht in relation to the hostile large town in his posture and in his suit (a molten collar is prohibited) on the street.  Larger groups of members of the military service have to take this into account.  Strolling around in disordered, traffic-hindering heaps is prohibited.  Road traffic The provisions of the road traffic regulations must be observed.  Pay particular attention to the maximum permitted speeds.  No more than 40 km in built-up areas.  drive.  Report traffic accidents to T. and the commandant's office immediately.  uppe alcohol consumption vodka is dangerous, drunkenness often leads to the heaviest punishments.  The commandant signed: V. Unruh

Vacation card The person from the front collecting point F hereby receives city vacation until midnight for the days: O. U., 194

Leaflet for military support.  I. Day of arrival: After registering with the armed forces support in the front assembly point (if necessary, escape takes place), officers and porters go to the officers' home Staryniewicza 7. There, accommodation and meals.  NCOs and man switches go to the dining room at Wſpolnastraße 81. There, the serving of the portion and coffee.  Then it goes to the incident at Hozastraße 13. Instructions for the room and delivery of de Deden and bed linen by the guard.  After that, free time until midnight.  At 900 o'clock all comrades were gathered in the dining room at 81 Wfpolnaitraße.  Announcement of the daily program.  Comrades!  Pay attention to the notices on the bulletin board and look at the large overview card vol 2Warſchau, which is hanging in the dining room.  Rejenders takes note of the munije request from the comrade in the armed forces. 2nd and 3rd day: care, so that you do not miss anything. Day of the break: With the intake of the morning coffee, the military care is over.

The daily run of the 2nd and 3rd day.  Weden: Weden at 7 am in the accommodation at Hozastraße 13. The bedrooms must be vacated by 8 am.  Morning coffee: Coffee is served from 8 a.m. to 9 a.m. in the Opeisefaal Wſpolnaſstrasse 81 and the daily program is given there.  Lunch is served at 12 noon in the dining room at Wipolnastraße 81. After lunch, free time;  bed rest is recommended to all comrades.  After bed rest, the beds need to be put back in order.  Lunch: Evenings: Portions are only served in the dining room from 5:30 p.m. to 7:30 p.m., coffee or tea is served at the same time.  Zapfenſtreich: evening leave daily until midnight;  From 015 o'clock there is silence in all rooms of the accommodation.