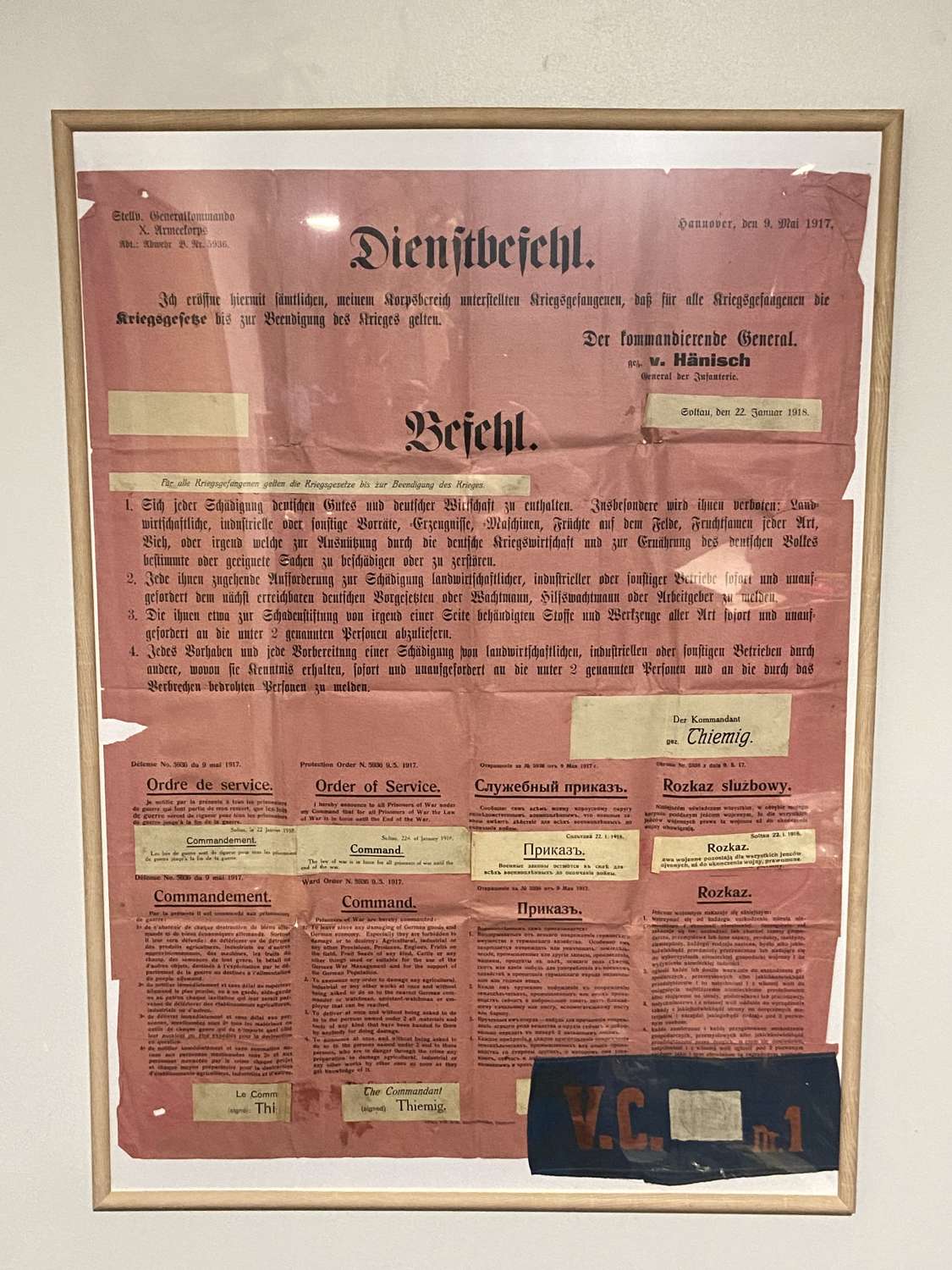 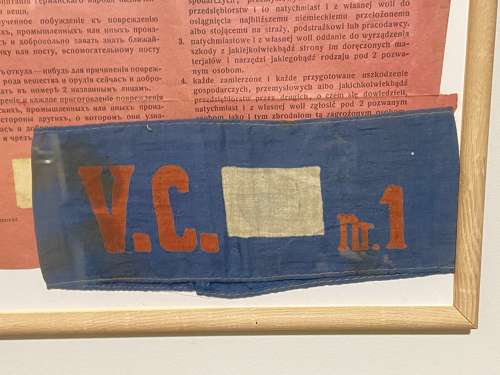 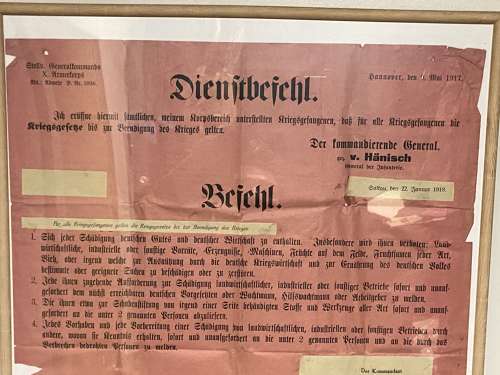 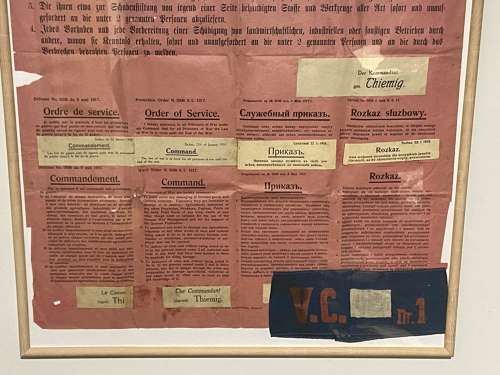 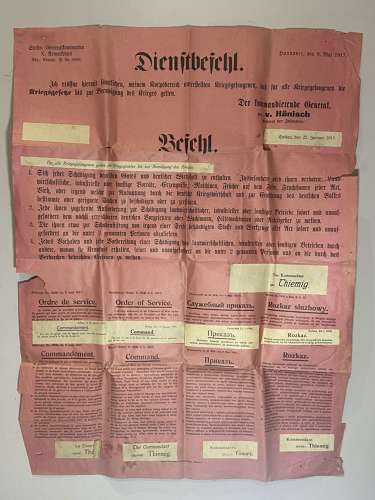 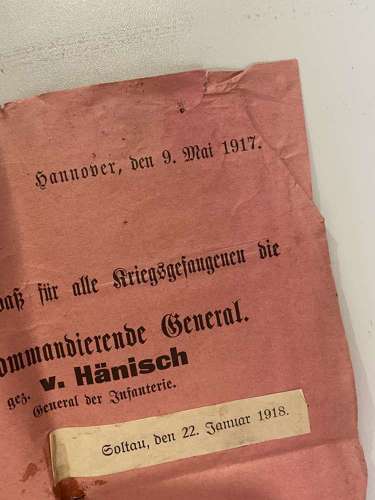 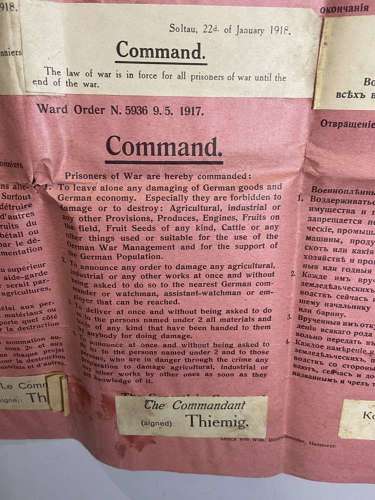 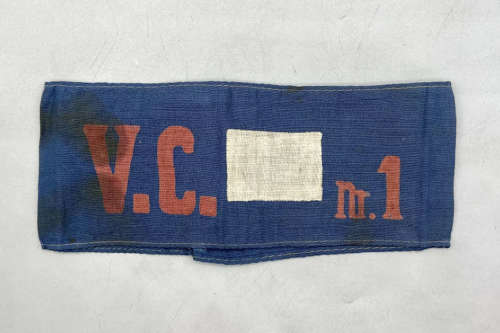 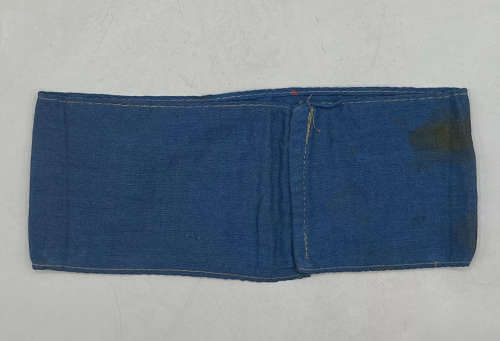 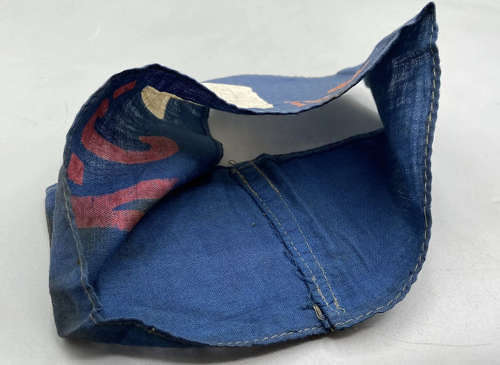 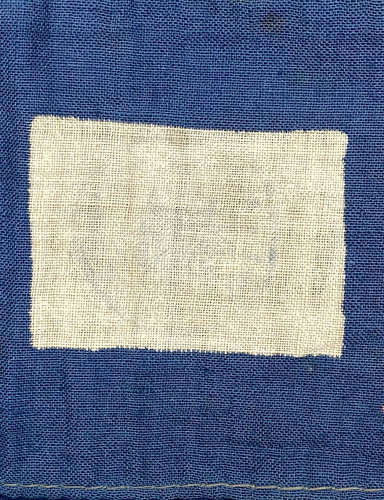 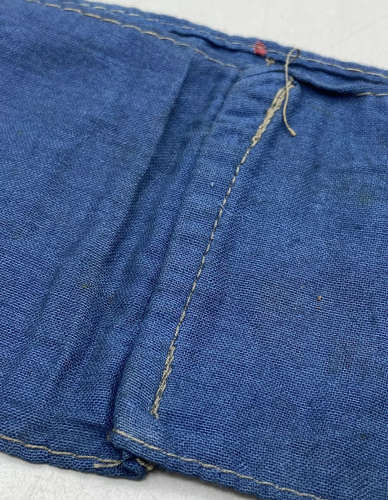 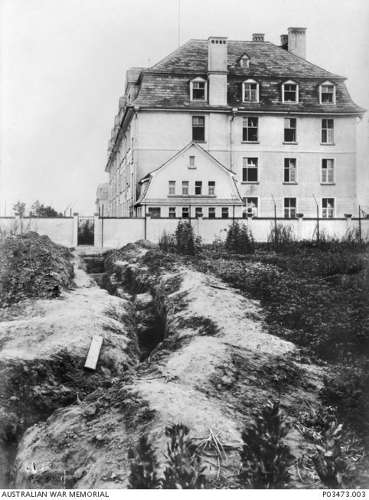 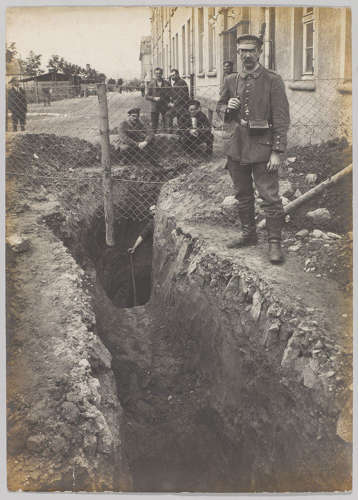 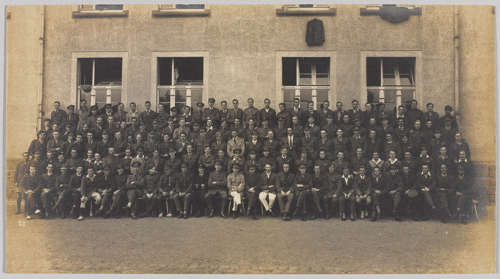 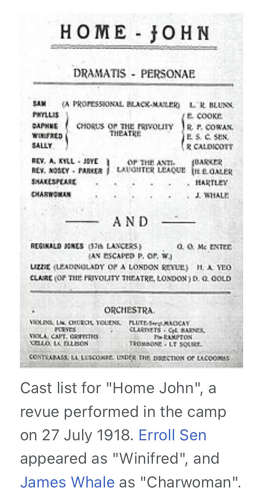 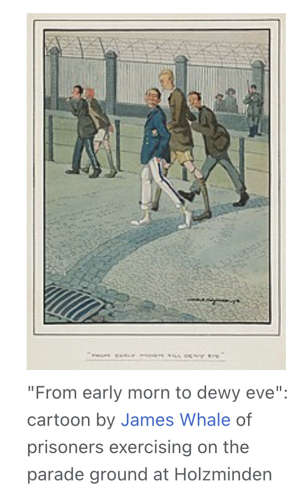 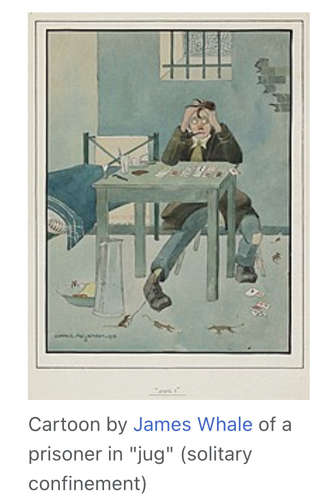 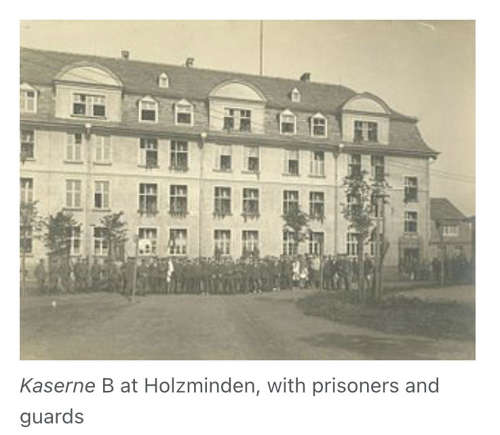 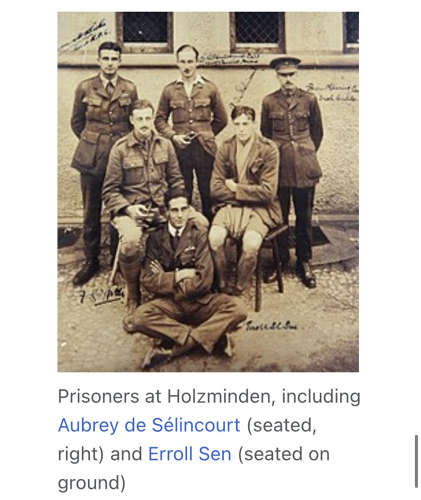 For sale is an Exceedingly Rare WW1 German Poster & German Guard Armband For The Holzminden Prisoner Of War Camp. These two brilliant pieces of history have been mounted in a modern frame, as keeping these two bits of history together is very important.

About the prisoner of war camp:

Holzminden prisoner-of-war camp was a World War I prisoner-of-war camp for British and British Empire officers (Offizier Gefangenenlager) located in Holzminden, Lower Saxony, Germany. It opened in September 1917, and closed with the final repatriation of prisoners in December 1918. It is remembered as the location of the largest PoW escape of the war, in July 1918: 29 officers escaped through a tunnel, of whom ten evaded subsequent recapture and managed to make their way back to Britain.

The prisoner-of-war camp is not to be confused with Holzminden internment camp, a much larger pair of camps (one for men, and one for women and children) located on the outskirts of the town, in which civilian internees were held. The internees mainly comprised Polish, Russian, Belgian and French nationals, as well as a small number of Britons.

The prisoner-of-war camp opened at the beginning of September 1917, under the auspices of X Army Corps, headquartered in Hanover. Other camps for officers under the command of X Corps, all smaller, were those at Clausthal, Ströhen and Schwarmstedt. Many of the initial intake of prisoners were transferred from these camps, and others at Freiburg and Krefeld, which had become overcrowded.

The camp held between 500 and 600 officer prisoners. There were also approximately 100–160 other ranks prisoners, designated orderlies: these men acted as servants to the officers and performed other menial tasks around the camp.

The camp occupied the premises of a cavalry barracks erected in 1913. The principal buildings, in which the prisoners lived, were two four-storey barrack blocks, known to the Germans as Kaserne A and Kaserne B, and to the British as A House and B House. Although the greater part of both blocks housed officer prisoners, both were partitioned internally: the western end of Kaserne A formed the Kommandantur, in which the German garrison was quartered; while the eastern end of Kaserne B was occupied by the orderlies. The basements included cells in which prisoners could be held in solitary confinement as punishment. Several wooden single-storey buildings in front of the barrack blocks accommodated service facilities, including the cookhouses, woodshed, bath-house, and parcel-room.

The camps of X Corps came under the authority of General Karl von Hänisch, who encouraged a harsh regime.The Kommandant at Holzminden when it opened was the elderly Colonel Habrecht ("a kindly old dodderer of about seventy"; but he was replaced after less than a month by his second-in-command, Hauptmann Karl Niemeyer, who remained Kommandant until the camp's closure. Niemeyer's twin brother, Heinrich, was Kommandant of the camp at Clausthal. The brothers had lived in Milwaukee, Wisconsin, for 17 years – until the spring of 1917, when the United States entered the war – and as a result Karl was able to speak English. However, his language was filled with idiomatic errors and slang terms: it was described by one prisoner as "bar-tender Yank"; while another stated that Niemeyer "talked broken American under the impression that it was English". The prisoners constantly ridiculed him, and nicknamed him "Milwaukee Bill". One error, which became notorious, was his assertion that "You think I do not understand the English, but I do. I know damn all about you."

The camp was described by the Daily Sketch in January 1919 as "the worst camp in Germany". This assessment needs to be understood in context: as a rule, officer prisoners enjoyed a more comfortable regime than other ranks prisoners (see World War I prisoners of war in Germany). Nevertheless, Niemeyer's regime was often arbitrary and punitive, and atrocities were committed, including the bayoneting of prisoners. He was put on a British prosecution blacklist for the reported allegations of ill treatment. Two "celebrity" prisoners who appear to have been singled out for harsh treatment were William Leefe Robinson (who had shot down a German airship over Britain, and who spent much of his time at Holzminden in solitary confinement), and Algernon Bird, the 61st victim of Baron von Richthofen. Robinson died in England in December 1918 from the effects of the Spanish flu pandemic, but the Daily Express was in no doubt that he was "in reality driven to death by the notorious Niemeyer.... He was murdered by Niemeyer, who was resolved to employ every instrument of cruelty against him".

One deprivation suffered by the prisoners was a poor diet, although again this must be seen in context: as a result of the economic blockade of Germany, little food was available locally even for the civilian population. Prisoners were able to supplement their diet with the contents of parcels sent by their families at home, and by the Red Cross and other humanitarian organisations. As a result, they were often better fed than the Germans. Prisoners were often able to use items of food to bribe their guards in return for lenient treatment or contraband equipment; while at other times they made a point of taunting their captors with the superiority of their material welfare, for example by drawing their full ration of German black bread only to burn it. Before the prisoners finally left the camp in December 1918, they made a bonfire of the furniture and everything else combustible: "it was a splendid sight and the Germans could only stand by helplessly, condemning the waste"

Prisoners found a variety of ways of dealing with the enforced idleness and monotony of prison life. Activities included sports (football, hockey and tennis were all played), concerts and plays, lectures, debates, and reading. James Whale found the amateur theatricals, in which he participated as an actor, writer, producer, and set designer, "a source of great pleasure and amusement", and the audience reaction "intoxicating": it was his introduction to stagecraft, and he went on to become a leading Hollywood director. O. G. S. Crawford spent much of his time reading and studying, and later reported that he was "far less unhappy" at Holzminden than he had been at his public school, Marlborough College.

From the outset, numerous officer prisoners attempted to escape from the camp. Techniques included cutting through the perimeter fence, and walking through the gates disguised as German guards, civilian workers, or (on at least one occasion) a woman. Many of these escapes were successful in the first instance, but virtually all escapers were recaptured within a matter of days.

The largest and most celebrated escape was that made through a tunnel, on the night of 23/24 July 1918. The tunnel had been under excavation for some nine months. Its entrance was concealed under a staircase in the orderlies' quarters in Kaserne B. As officers were forbidden to enter the orderlies' quarters, in the early months the excavators had to reach it by disguising themselves in orderlies' uniforms. At a later stage, a secret access door between the officers' and orderlies' quarters was created in the attic. Eighty-six officers were on the list of those waiting to escape but, on the night, the tunnel partially collapsed on the thirtieth man, leading to the abandonment of the enterprise. Of the twenty-nine who did escape, ten succeeded in making their way to the neutral Netherlands and eventually back to Britain. Among them was Colonel Charles Rathborne, the Senior British Officer in the camp, who – on account of his good German – was able to travel by rail without arousing suspicion, and managed to cross the Dutch border after only five days. The other escapers travelled on foot, and most took at least 14 days.

John Keith Bousfield (1893–1945), later general manager of the Asiatic Petroleum Company and member of the Legislative Council of Hong Kong

Michael Claude Hamilton Bowes-Lyon (1893–1953), son of the 14th Earl of Strathmore and Kinghorne, and brother of the future Queen Elizabeth The Queen Mother

Two movies have also been made on this famous camp:

A fictionalised treatment of the tunnel escape from Holzminden was filmed as Who Goes Next?, and released in March 1938. It was directed by Maurice Elvey, and starred Barry K. Barnes.

A documentary film describing the 1918 escape, The First Great Escape, was produced by National Geographic in 2014.

The poster measures 64cm Height x 46cm width. History of the pow camp can be seen underneath the translation.

A rough translation of the poster can be seen below:

“Affirmation. The laws of war apply to all prisoners of war until the end of the war. 1. To refrain from any harm in terms of what is clearly good and clearly economic. Jusbejondere is forbidden to them; lmntu economic, industrial or fifty borrowings, ore casts, majchins, fruits on the field, fruit yams of every kind, cattle, or anything that was determined or suitable for the consumption of the German war economy and for the nourishment of the dentjchen Bolfes or to destroy. 2 Address an incoming request for damage to agricultural, industrial or voluntary operations to report jojort and uuauf- gciorbert to the nearest available German borrower or Bachtmann, auxiliary guard or employer. Qic iluct to hand over materials and tools of all kinds handled by any side, for example, immediately and unsolicited to the perjoneu specified under 2. 3 very borrowings and any borrowing from agricultural, industrial or fusty farms. Signed the commander Thiemig. “

The next four bits have been done in French, British, Russian and polish all meaning the same for each of the nationalities taken as a prisoner of war:

The WW1 German Printed Prisoner Of War Camp Guards Armband which states “V.C. No.1.” This armband belonged to a German guard that worked at Holzminden Prisoner Of War Camp. In the white rectangular section is a very faded german ink Imperial german army stamp. This armband is in good condition, and is made from thin cotton, and stitched together at the back. If you take a look at my website atlasantiques.co.uk there are a few more photos of the camp, and it’s occupants.

This is a excellent piece of history, with such an impressive record! Tons of research to be done and it really is one of the most interesting and rarest pieces I’ve had! This is in good condition for its age, several odd small rips around the sides, but otherwise in great condition for its age! Some of the information from 1917 have been covered over with white alterations for 1918 (but if you shine a light through the back you can still see what they say! This really is a true collectors piece and very very little posters still exist today if not any! Guaranteed original or money back guaranteed. This will be sent via express 48 parcelforce and dispatched within two working day’s.