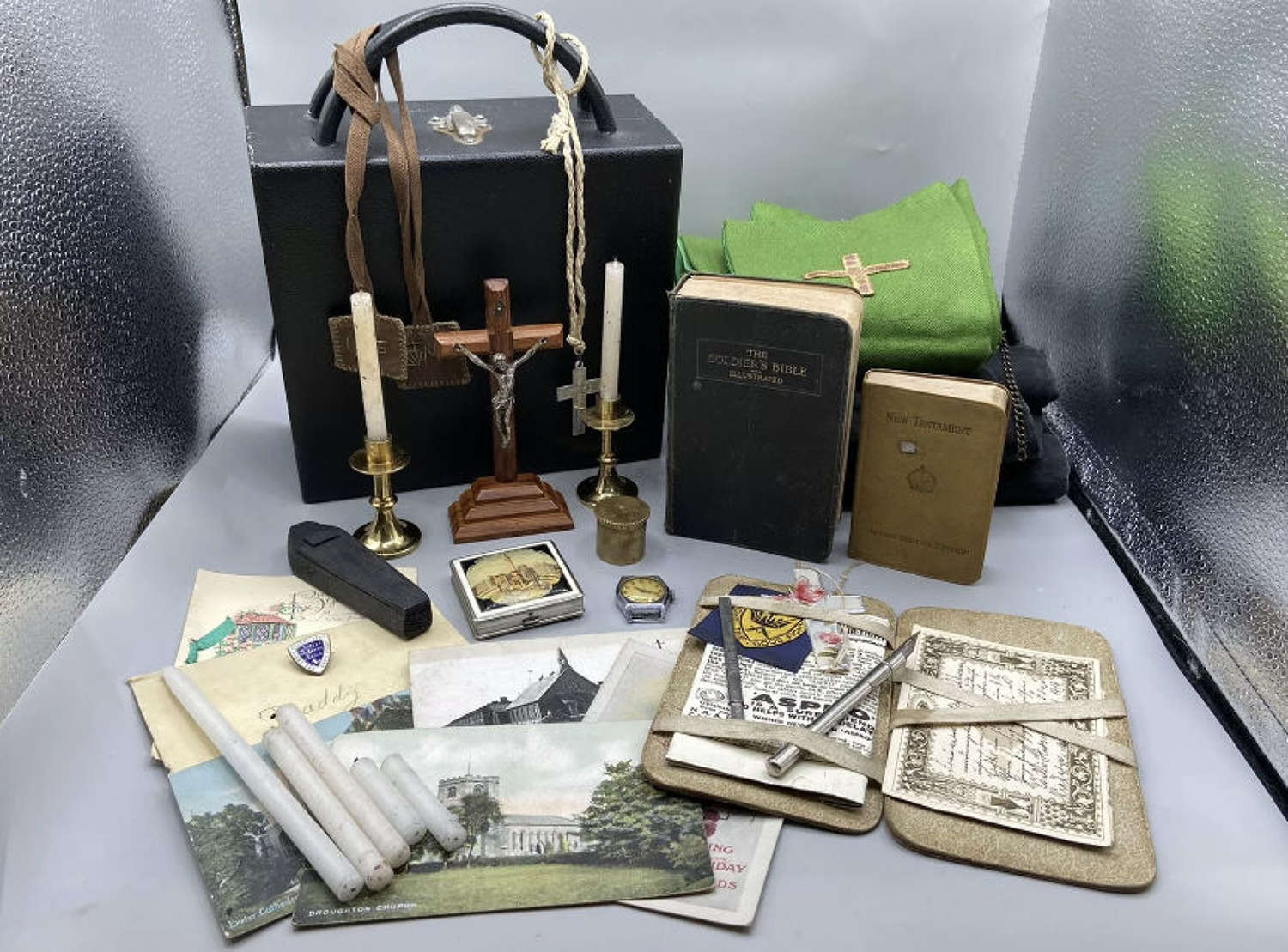 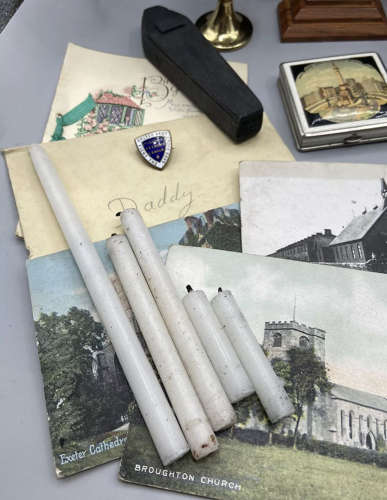 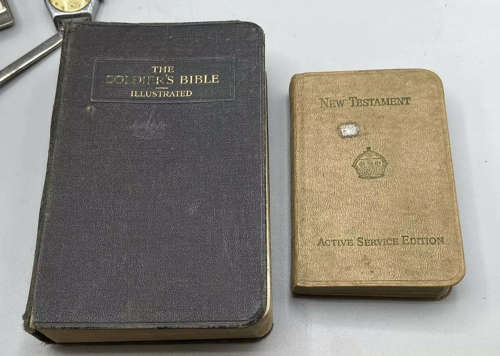 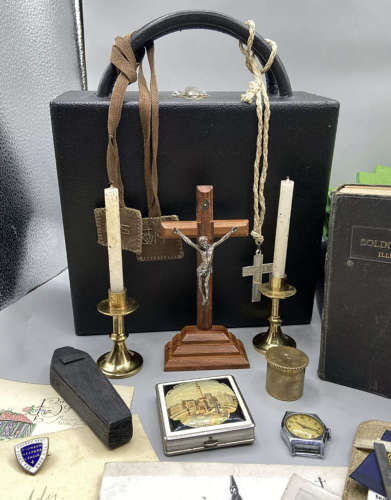 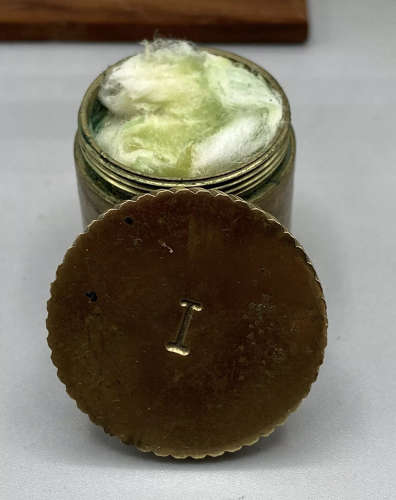 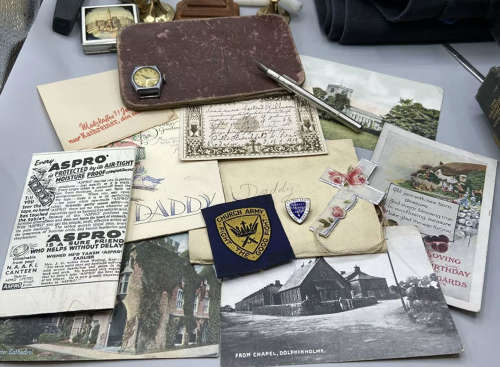 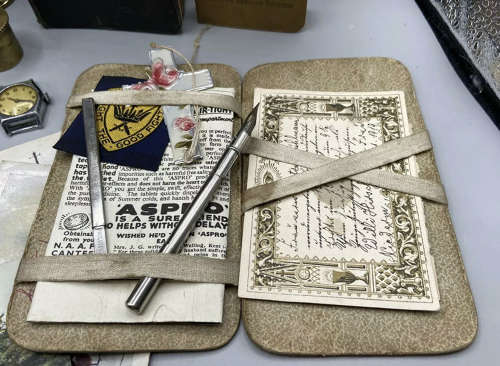 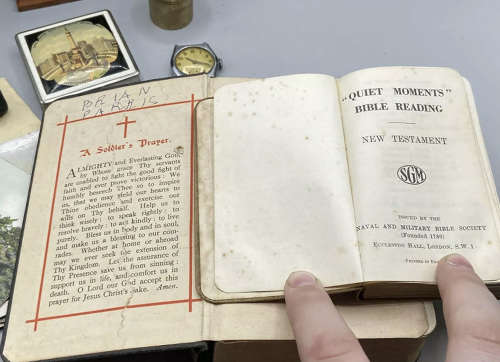 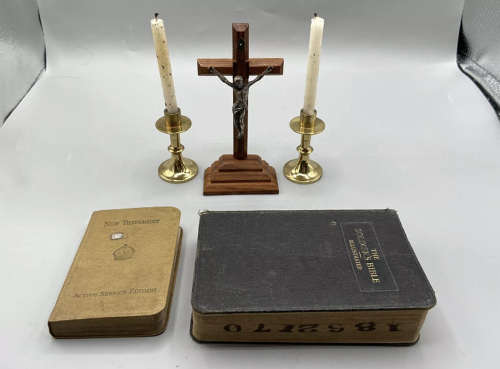 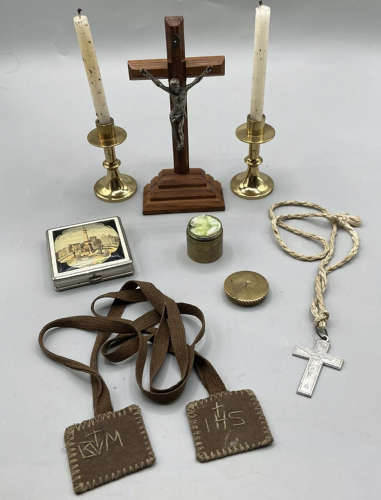 For sale is a period Ww2 British army Christian/ catholic priests chaplain portable kit. This portable leather chaplains case hatch is marked Cheney England who is a well known manufacture of custom made wartime chaplain kits. This Chaplin kit case was custom made for the items in this kit, as the insides of the case fit perfectly to the crucifix, candles sticks and other items. This Chaplin kit consists of the following items:

5. ww2 wooden crucifix with Jesus on

6. ww2 brass screw lid jar marked with “I”on top to indicate incense in which this still has its original contents

8. thin steel tube which contains a 1911 marked stitching hook & ink nib (in which the tube converts to a dip pen)

10. ww2 1939 edition “the soldiers Bible illustrated” book with a “soldiers prayer” inside the front cover

Everything fits within the chaplain box, apart from the two ceremonial sashes.

At the beginning of the Second World War, there were twelve First Class, thirty-one Second Class, thirty-four Third Class and forty-three Fourth Class chaplains in the Regular British Army. In addition, there was about one-hundred chaplains in the Territorial Army. On 24 August 1939, no less than two-hundred and thirty-three chaplains were appointed as war loomed, and the army expanded. By the end of the war, the numbers of chaplains had risen to over three thousand, five-hundred.

Each infantry battalion, armoured regiment or artillery regiment had one chaplain attached, graded at Chaplain to the Forces Fourth Class (Captain). During a battle, they often worked with the medical officer in the Regimental Aid Post, offering pastoral and practical support to the wounded. It’s believed 96 British and 38 Commonwealth Army Chaplains die during the war. The Second World War. New formations such as Airborne Forces had Chaplains learning new skills such as parachuting. The fortitude of devoted Chaplains such as The Reverends Happy Harry Thorpe and HLO Davies in the prison camps of the far East sustain the captives during the horrors of life and death on the Burma-Siam Railway and of the notorious Shamshuipo Camp.

The photographs make up part of the, I will describe the item the best I can and to the best of my knowledge. As the buyer please view the photos carefully before purchasing. Guaranteed original or money back. This will be dispatched by Royal Mail special delivery, insured and dispatched within two to three working day’s. Also happy to post world wide.