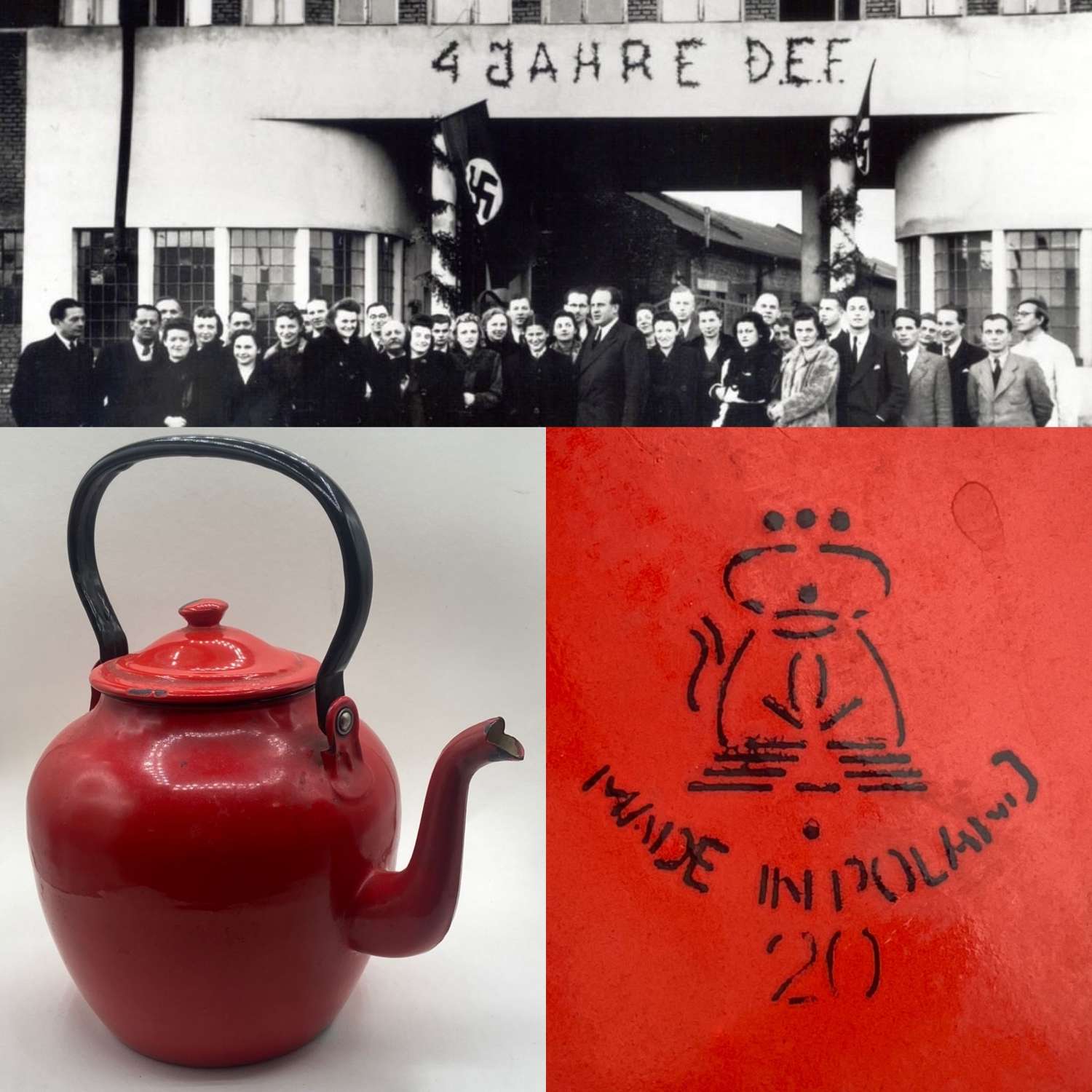 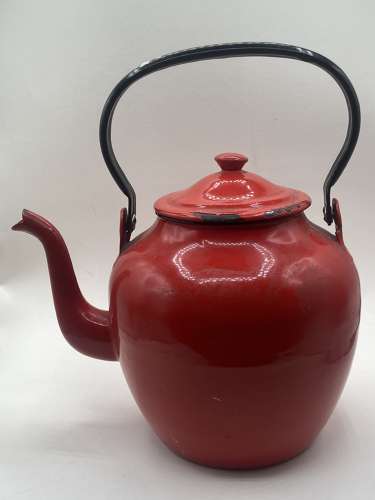 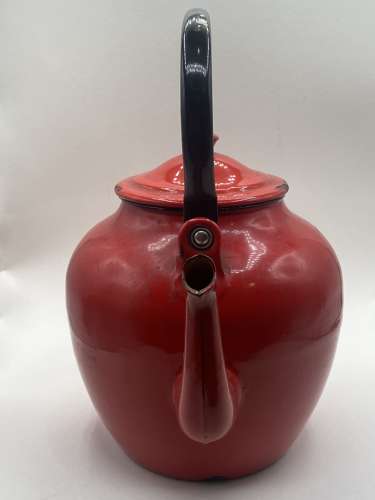 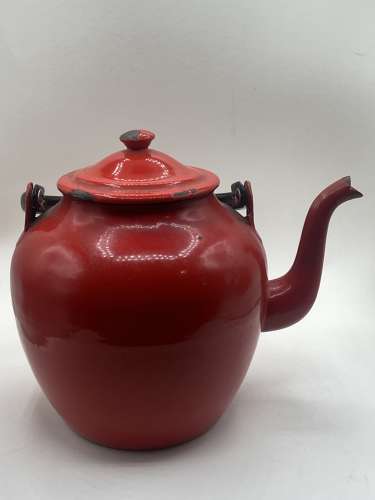 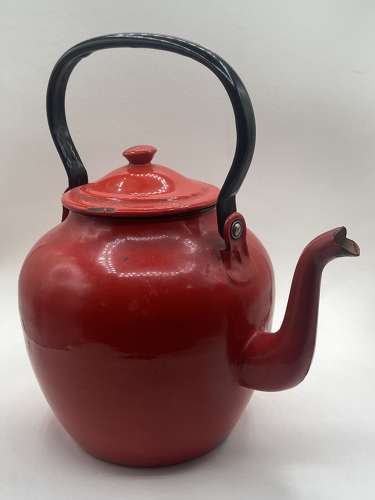 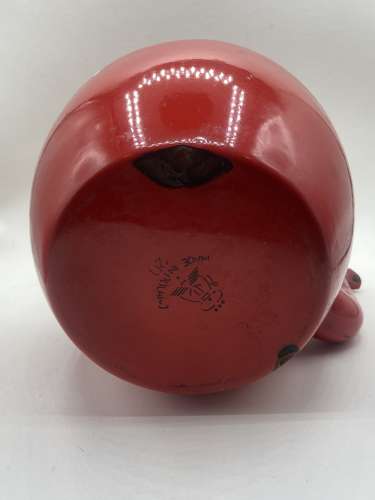 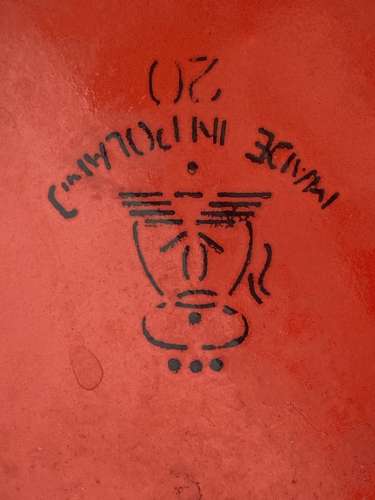 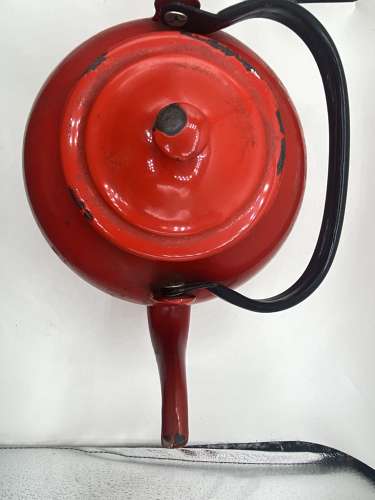 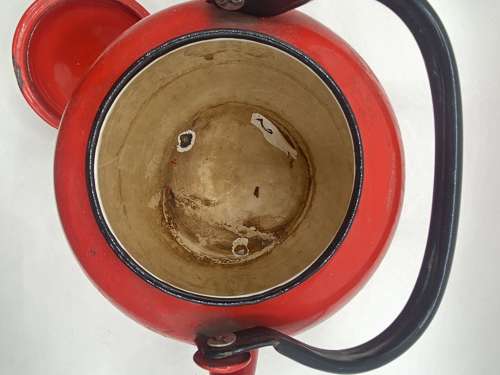 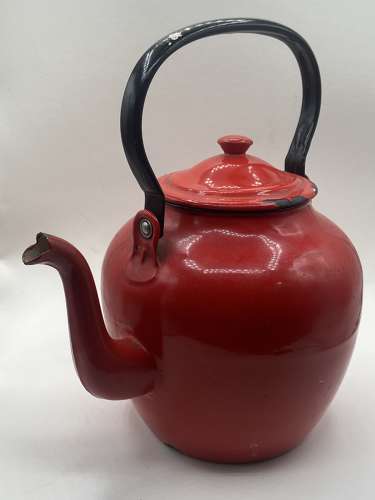 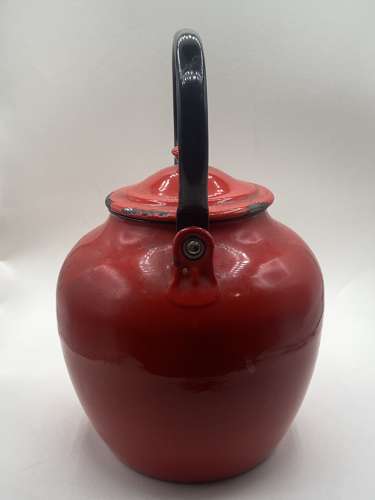 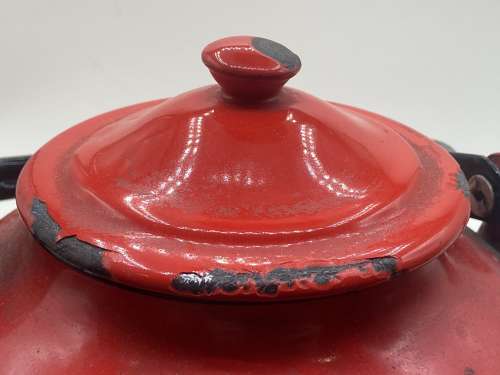 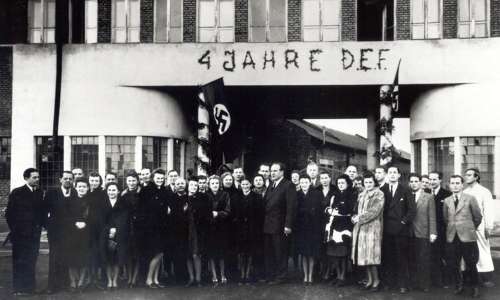 For sale is an exceptionally rare WW2 Die Deutsche Emailwarenfabrik DEF Oskar Schindler's Factory Enamel Kettle. This Polish Enamel Kettle Made by "The German Enamel Factory" (Die Deutsche Emailwarenfabrik, DEF), Oskar Schindler's factory. The kettle is made of metal and coated in red enamel, signed with the factory hallmark on the bottom. Following the outbreak of WWII and the occupation of Poland by Germany, Schindler moved to Krakow, and in October he got control of an enamel facturing factory in Zablocie near Krakow.

Oskar Schindler's Enamel Factory (Polish: Fabryka Emalia Oskara Schindlera) is a former metal item factory in Kraków. It now hosts two museums: the Museum of Contemporary Art in Kraków, on the former workshops, and a branch of the Historical Museum of the City of Kraków, situated at ul. Lipowa 4 (4 Lipowa Street) in the district of Zabłocie, in the administrative building of the former enamel factory known as Oskar Schindler's Deutsche Emailwarenfabrik (DEF), as seen in the film Schindler's List. Operating here before DEF was the first Malopolska factory of enamelware and metal products limited liability company, instituted in March 1937.

The company was established by three Jewish entrepreneurs: Michał Gutman from Bedzin, Izrael Kahn from Kraków, and Wolf Luzer Glajtman from Olkusz. The partners leased the production halls from the factory of wire, mesh, and iron products with its characteristic sawtooth roofs, and purchased a plot at ul. Lipowa 4 for their future base. It was then that the following were built: the stamping room where metal sheets were processed, prepared and pressed, the deacidification facility (varnishing) where the vessels were bathed in a solution of sulfuric acid to remove all impurities and grease, and the enamel shop, where enamel was laid in a number of layers: the priming coat first, then the colour, and finally another protective coat.

The ownership of the company changed a number of times, and its financial situation continued to worsen. In June 1939, the company applied for insolvency, which was officially announced by the Regional Court in Kraków.

On 1 September 1939, Nazi Germany. Invaded Poland and the Second World War broke out. On 6 September, German troops entered Kraków. It was also probably around that time in which Oskar Schlindler, a Sudeten German who was a member of the NSDAP and an agent of the Abwehr, arrived in Kraków. Using the power of the German occupation forces in the capacity of a trustee, he took over the German kitchenware shop on ul. Krakowska, and in November 1939, on the power of the decision of the Trusteeship Authority he took over the receivership of the "Rekord" company in Zabłocie. He also produced ammunition shells, so that his factory would be classed as an essential part of the war effort. He managed to build a subcamp of the Plaszow Forced labour camps in the premises where "his" Jews had scarce contact with camp guards.

In 1940, Schindler changed the name of the factory to Deutsche Emailwarenfabrik - DEF. Initially, Poles predominated among the employed workers. Year by year, the number of Jewish workers recruited through the ghetto wage office increased. Schindler in this respect was initially driven by economic reasons—employing Jews significantly decreased the costs of recruitment, as they did not receive any compensation. For each Jewish worker, the factory director paid a small fee to the SS - 4 złotys per day for a working woman and 5 złotys per day for a working man. The Poles remained employed mainly in administrative positions. The number of Jewish workers increased from over 150 in 1940 to around 1100 in 1944 (this is the sum of workers from three nearby factories, barracked in the sub-camp at DEF).

The production in the factory and the camp was controlled, and Amon Goeth, the commandant of the Plaszow camp, was often a guest here. Thanks to Schindler's efforts, the inspections were not so burdensome for the plant employees. It was only after the Płaszow camp was transformed into a concentration camp in January 1944 that the prisoners from Zabłocie were subject to permanent SS control. The work initially lasted 12 hours in a two-shift system, then 8 hours in a three-shift system. As the eastern front approached Kraków, the Germans began to liquidate the camps and prisons in the east of the General Government. It was then that Oskar Schindler decided to evacuate the factory with its employees to Brünnlitz in the Czech Republic.