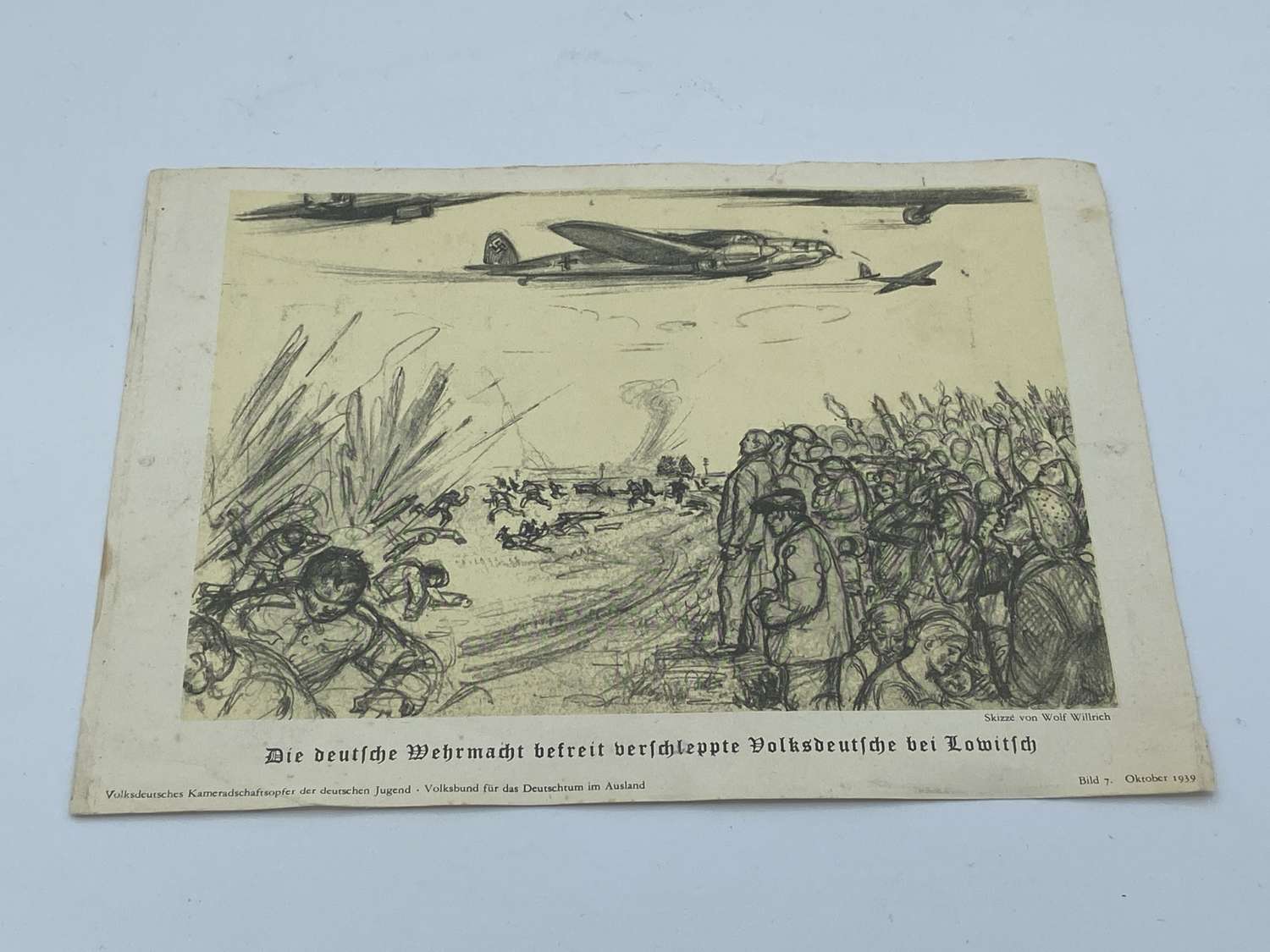 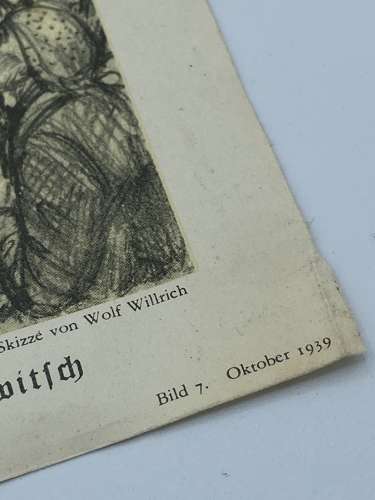 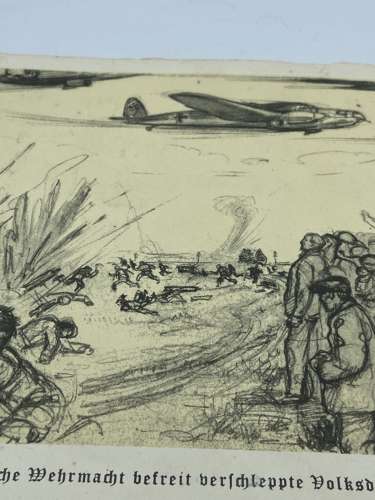 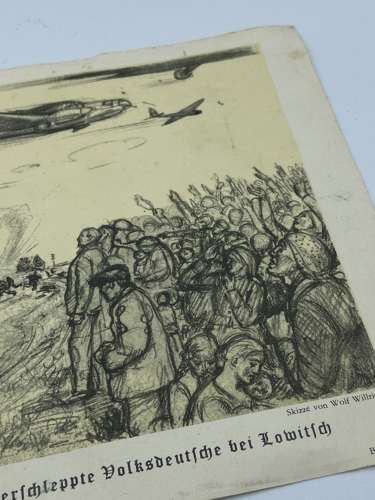 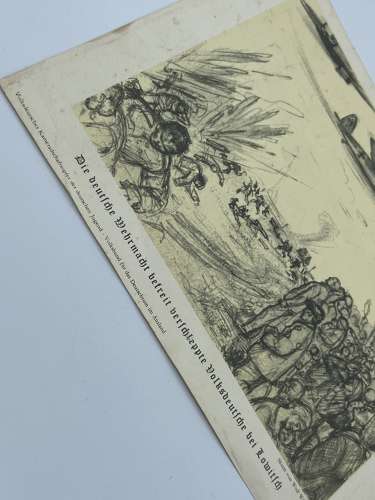 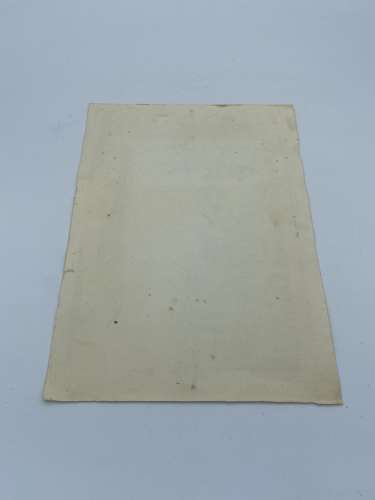 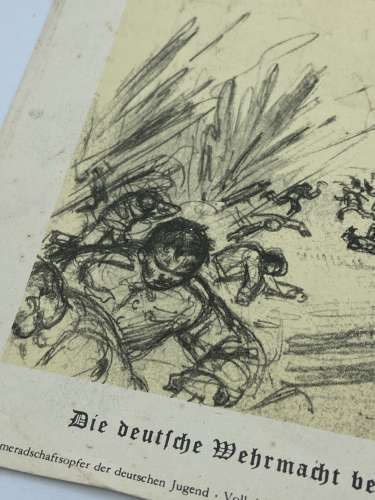 For sale is a very rare WW2 German 1939 Sketch Print By Wolf Willich which shows The Liberation Of German people In Poland. The German text translated to English states;

From the end of WW1 to 1939 More than 58,000 Dead and Missing were lost of the German minority living in Poland.

Since the days of Versailles, the political situation between Germany and Poland had never calmed down. On the contrary the systematic deprival of the right of the German element long established in former Prussian provinces remained such a dead weight on German-Polish relations that the greater part of the world's opinion was always sceptical of the success of the German-Polish agreement of understanding. In German opinion the strong personality of Pilsudski offered in itself guarantee enough that, in the development of the idea of an understanding, an alteration in sentiment would take place, together with a change in the hostile attitude of wide circles of influence in Poland against German minority groups. The Führer held the firm opinion that, in spite of all obstructive circumstances, the German-Polish work of cooperation must be attempted and developed until the desired results had been attained. He held that despite the disappointment of the German Government caused by the unscrupulous Polish methods within the sphere of minority policy, as well as by the continuous anti- German press campaign, these must not be allowed to interfere with his hopes for the success of the final issue.

Even during Pilsudski's lifetime it had been clearly shown that the authority of the Marshal himself was not sufficient to make the subordinate Polish officials adhere to a just treatment of the German minority. The exaggerated Polish patriotic feeling still appeared in a more moderate way, but it had not been eliminated. For the time being suppressive measures were not so brutal, but more cunning. The political system based on the old watchword of sworn principle to exterminate everything of German origin, continued unhampered; full responsibility for this must be ascribed to the Polish Government. After the death of Marshal Pilsudski the mask was completely dropped. A

campaign of aggressive activity, based on the desire for annexation and such aims was very soon developed in speech and in print.

The continuous efforts of Germany to bring about tolerable relations between the German minority and the Polish population were of no avail. Her efforts were completely frustrated by the sterile attitude of the Polish Government. Poland's absolutely negative attitude, marked by an unbroken chain of violations of the spirit of the German-Polish pact, and also by a continual breach of the fundamental principles governing the protection of minorities, agreed to and signed by Poland in the reciprocal minority agreement of Nov. 5, 1937 became manifestly clear when the respective representatives of the central administrative offices of both countries met in Berlin on Feb. 27, 1939, to discuss all outstanding questions, pertaining to minorities. These unsuccessful discussions showed that Poland had no intentions of carrying on Marshal Pilsudski's clearly defined policy of peace and harmony with his German neighbour. The specific desire of the Führer for a definite settlement of the Danzig question, and that of a territorial link between East Prussia and the Reich were repeatedly placed before the Polish Government in the friendliest manner. The evasive attitude, however, of Colonel Beck, Minister for Foreign Affairs, made it clearer from month to month that the Polish authorities were methodically turning their backs on any intention of agreement [p. 15] with Germany. Poland's increased resistance to any kind of reparation or even alleviation of the injustice of Versailles as regards Germany's Eastern boundary, corresponded with the stiffening of the Polish policy towards the members of the German minority and with an intensified Chauvinistic activity of the Polish press, tantamount to a direct challenge to the Reich.

Even in the spring of 1939 it became quite clear that the change in Poland's foreign policy was being definitely advanced and guided by two forces. Polish public opinion, influenced by the Government's toleration of anti-German propaganda, was imbued with an unparalleled feeling of hatred against everything German. Any statement or expression pertaining to the daily life of the German minority was considered as an hostile act against the Polish State and in consequence the extermination of everything of German origin was put forward as a national duty. It was evident that the restraint of the German Government towards this degeneration of hatred towards minority Germans was regarded by the Polish authorities as an expression of weakness. This fateful error was the underlying motive for the vehement attacks on Germany which expressed themselves in impassioned demands for the annexation of German territory, and reached their climax in the ridiculous display of megalomania, as displayed in a demand for the River Elbe as a boundary necessary to Polish national requirements. The Polish Government gave a free hand to the perpetrators of such bellicose demonstration of annexation, as well as to the miscreants of acts of violence against the German minority in the Western provinces, who were in their turn aided and abetted by the provincial authorities. The responsibility for this feverish atmosphere was hereby placed on the shoulders of the Polish Government. This finally resulted in moral chaos in towns and in the country, accompanied by indiscriminate murders of thousands of defenceless and innocent minority Germans by Polish soldiers and armed civilians.

This print is in great condition and the history around the subject is often unheard of! These are guaranteed original or money back guaranteed. These will be sent via 1st class signed for and dispatched within two to three working day’s.