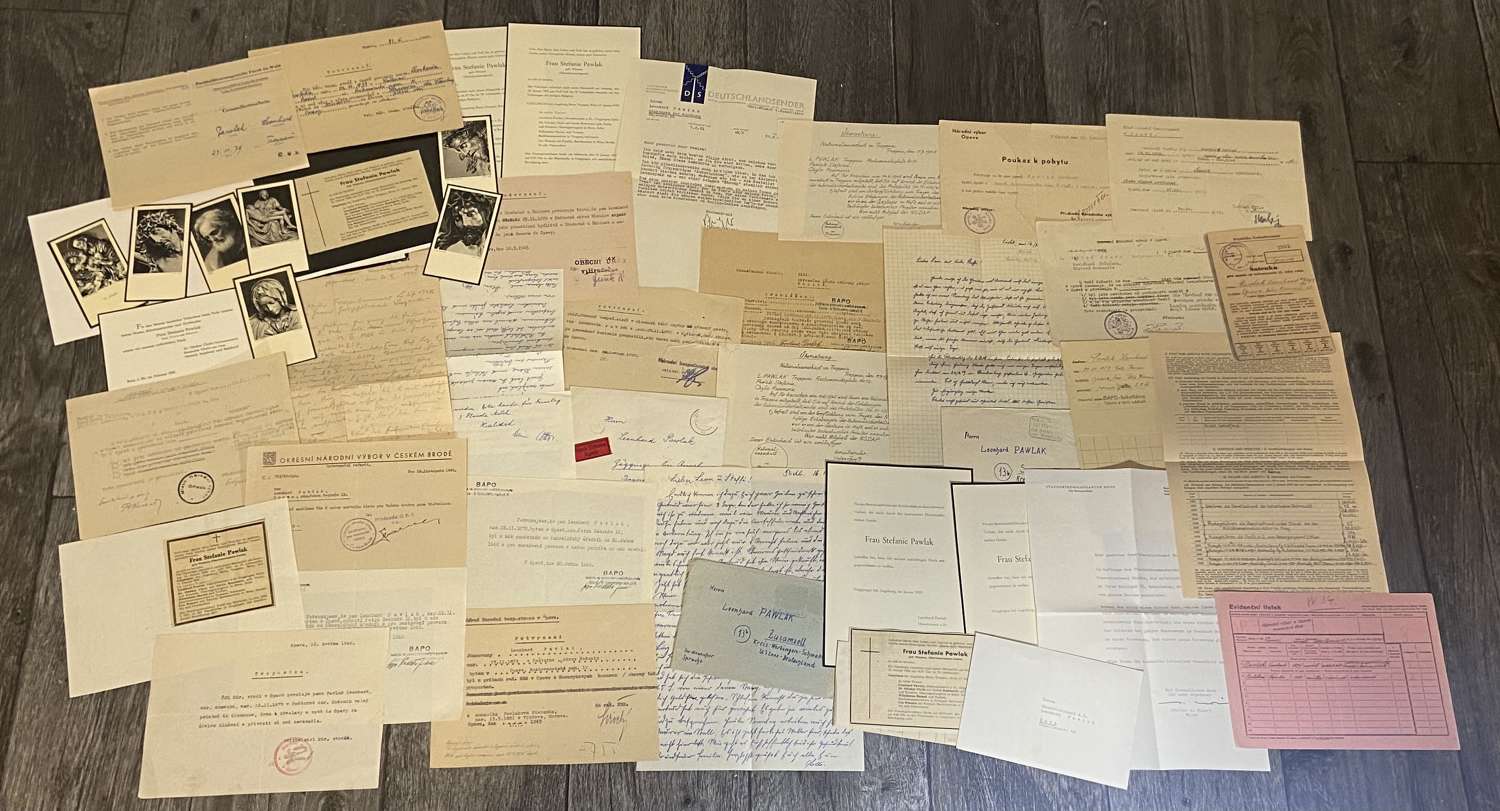 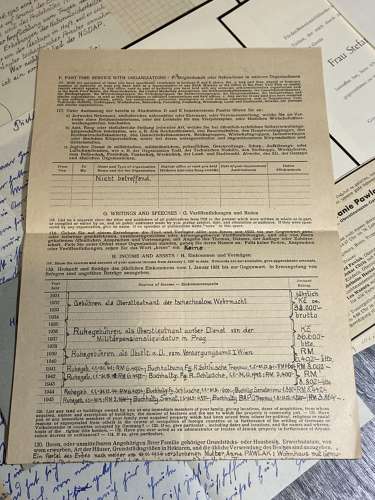 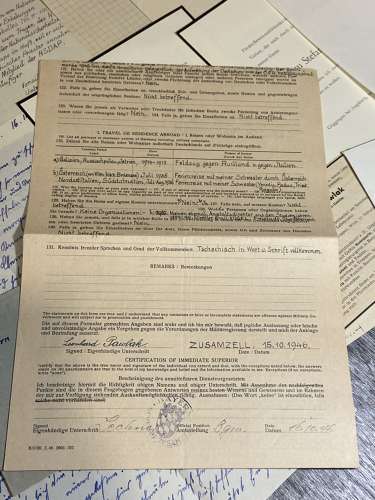 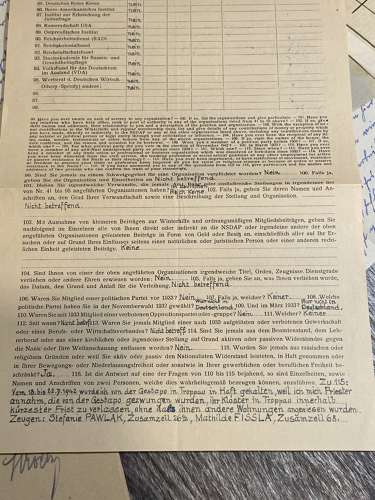 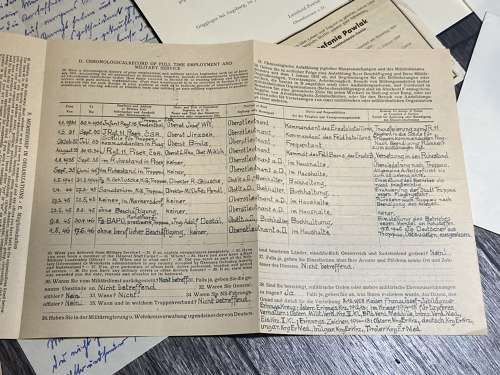 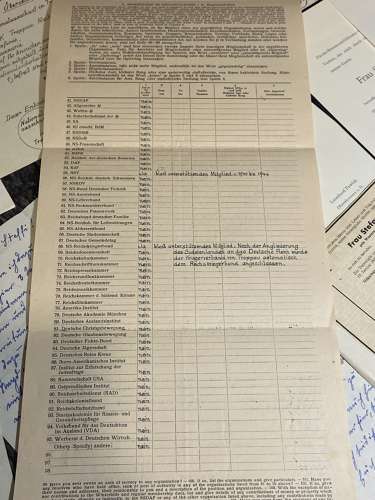 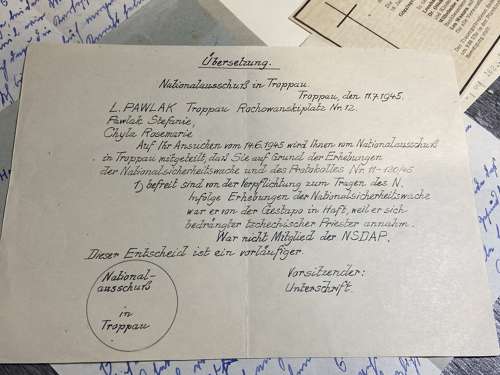 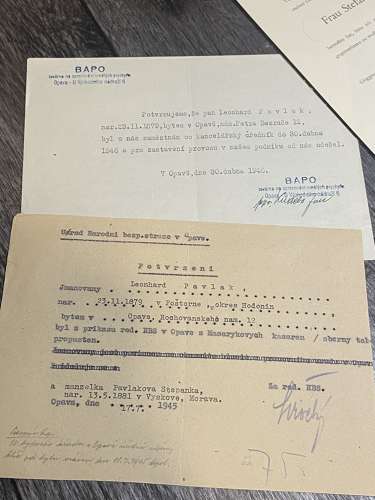 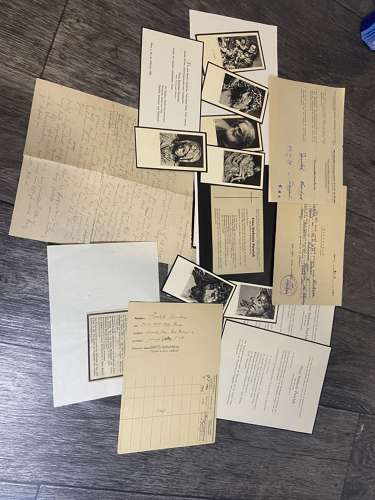 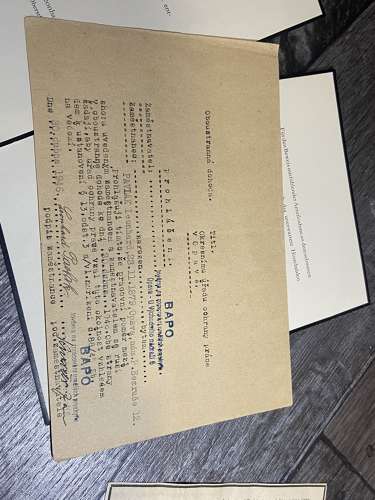 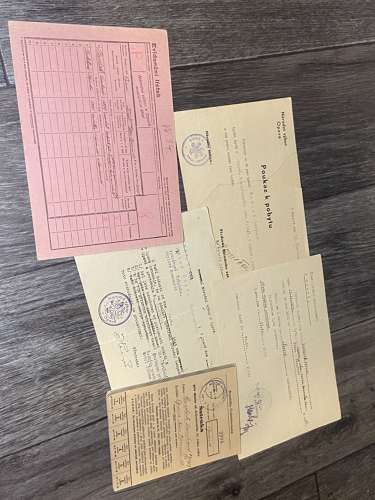 £300.00 Approx $374.53, €354.61, £300
(1 in stock)
Qty
For sale is a very rare WW2 German Paperwork lot belonging to Leonhard Pawlak who was born in 23rd of November 1879 who was a Roman Catholic. Who had a very impressive military career in the early 1930s and stood up for and hid Czechoslovakian priests which got him thrown in a Gestapo prison. But previously he had the rank of Oberstleutnant, lieutenant colonial and commander of several regiments.
His military career is as follows:
1.1.1931 to 30.4.1931 Leonhard was Oberstleutnant of infantry regiment 15 troppa-freudenthal, in which his roles was Commander of the replacement battalion.
1.5.1931 to September 1932 oberstleutant of Jager regiment 11 PISEK CSR, in which his role was commander of the field battalions.
October 1932 till July 1933 Oberstleutnant of School for Truppen-freudenthal and the commander in Prague.
August 1933 till 31.12.1934 Oberstleutnant of of Jager regiment 11 PISEK CSR and his roles were commander of the reserve battalion and field battalions.
1.1.1935 till September 1935 retired in pisek. in the household still held position of Oberstleutnant A.D. and moved to Troppau.
September 1935 till June 1946 retired in Troppau in the household, general duty to work up to 65 years of age.
In WW1 He served in the following countries Spain Galizien, Russia, Poland. On military duties he also in 1935 he served In Austria, and in 1936 north east Italy & Croatia.
The following medals he was awarded:
1. Austrian Jubilee Cross Medal - 1848-1908 - Kaiser Franz Joseph 60th Jubilee
2. 1870 Iron cross second class
3. Austria - Empire: Tirol Medal 1914-1918
4. Ww1 Bulgaria commemorative medal
5. Ww1 Hungarian commemorative medal
6. Ww1 imperial German commemorative medal
7. Ww1 austria 1914-18 ostereich medal
8. WW1 Commemorative Medal of the Kyffhauser (Lighthouse) Veteran's Association medal
9. Austro - Hungarian World War I Service Medal 1914-18
10. Hindenburg medal
11. Ww1 iron cross second class
12. Ww1 bronze Austria-hungaria bravery medal
13. Ww1 silver Austria-hungaria bravery medal
14. Military Merit Cross 3rd Class with War decoration
In 1959 his beloved wife Mrs Stefanie Pawlak who passed away 10th January 1959 at 2:37 Pm who died of a heart attack. In a letter from the national committee in Opava July 11th 1945, stating he was except from wearing a uniform, as he was imprisoned by the GESTAPO because he took care of harassed czech priests (please see this letter translated at the bottom page). Once released from the Gestapo camp he was given a free pass to travel home with no restrictions in which he was given a V34 transport ticket for a displaced person. (There are four documents in this paperwork group that confirm he was arrested by the Gestapo and sent to a camp).
Translation of the National Committee13 in Opava.  Troppar, July 11, 1945.  L. PAWLAK Troppau Rochowanskiplatz No.  12th  Pawlak Stefanie, Chyla Rosemarie In response to your search on June 14, 1945, the National Committee in Troppar informed you that?  On the basis of the surveys by the National Security Guard and Protocol No.  11-120 / 4-5 3 are exempt from the obligation to wear the N. As a result of investigations by the National Security Guard, he was imprisoned by the Gestapo because he took care of harassed Czech priests.  Wasn't a member of the NSDAP.  This decision is a preliminary one.  National Chairman: Committee's signature to Troppar.
He later after the war changed his nationality from Germany to Czechoslovakian. This is a superb grouping of paperwork, to a highly decorated soldier, he thought for his country in WW1 and saw that what he thought for in WW1 was being mocked and took matters into his own hands. These individuals are the real heart of Germany! People that stood up against evil! This lot has a huge research potential and lots like this rarely come up for sale!
Guaranteed original or money back guaranteed. This will be sent special delivery and dispatched within two to three working day’s.