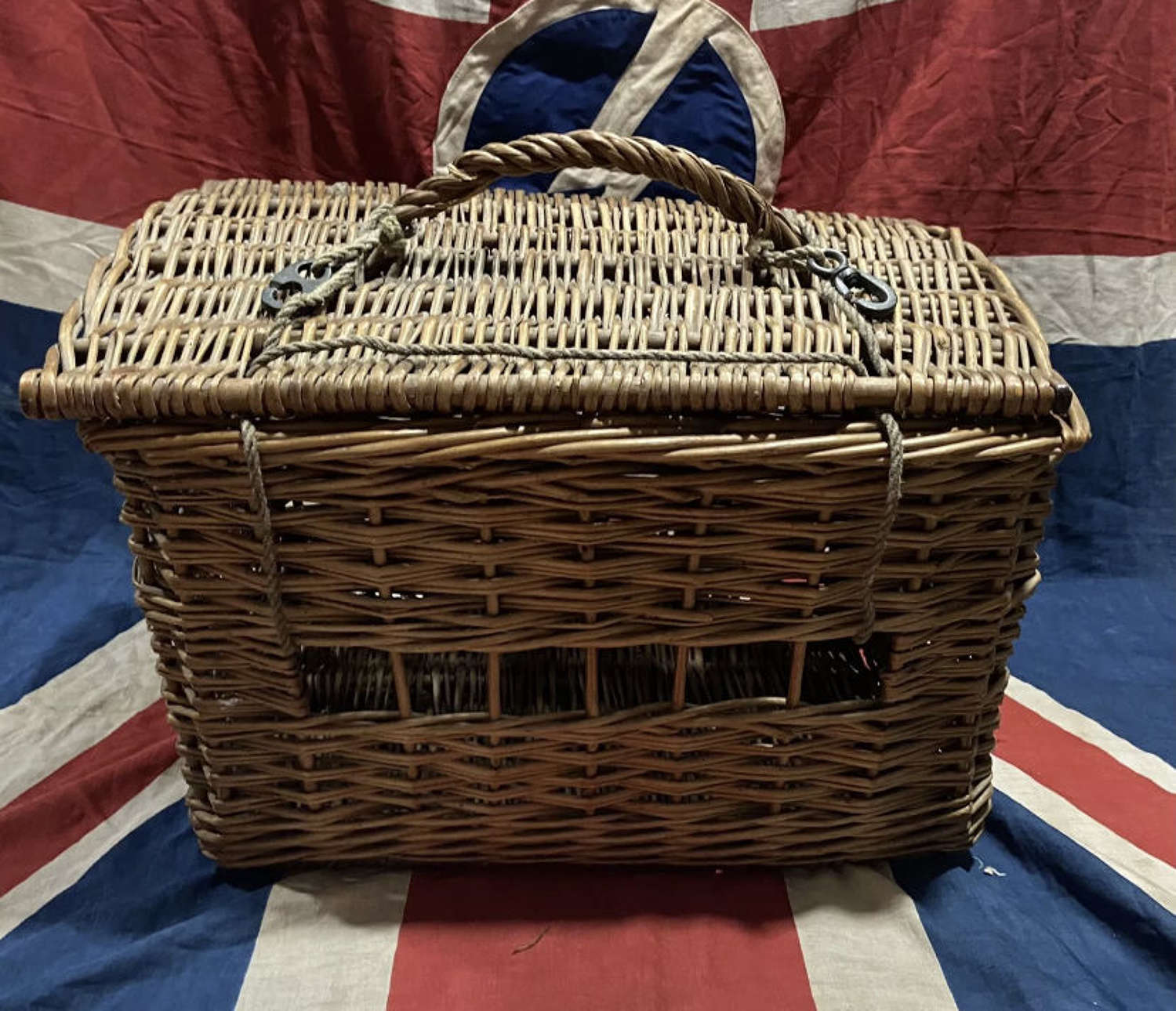 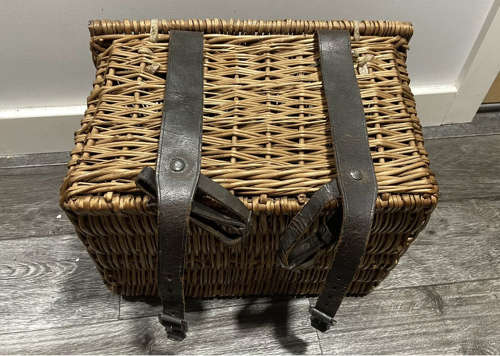 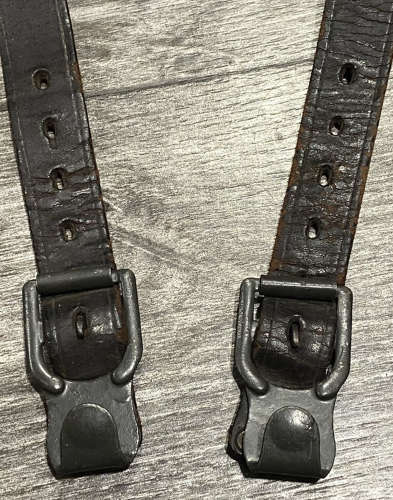 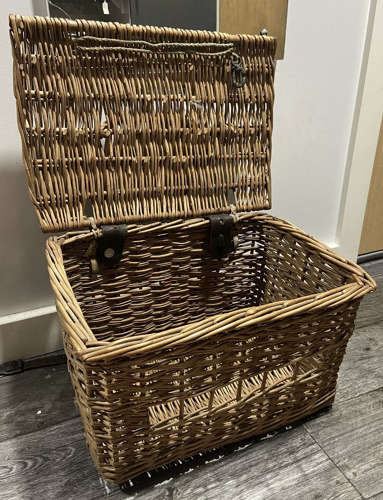 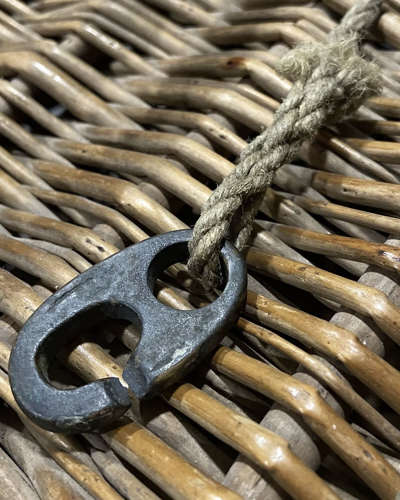 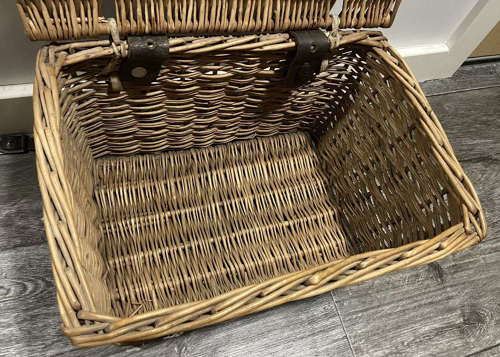 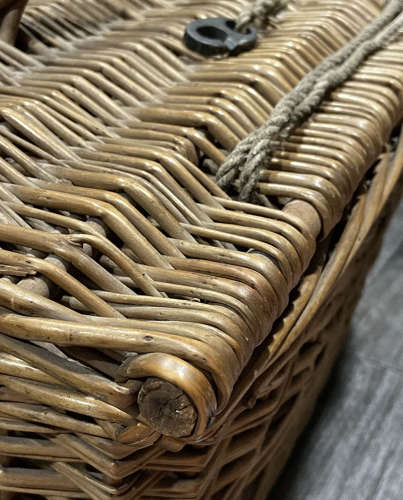 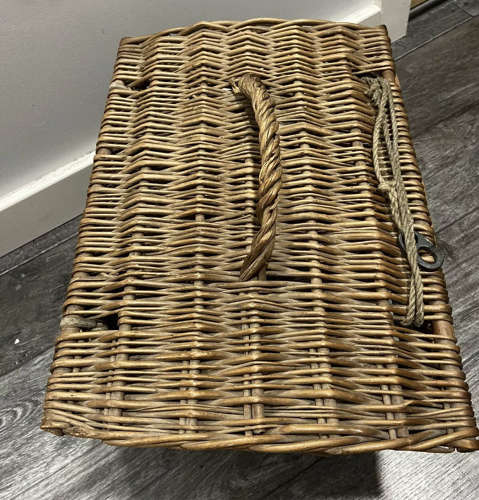 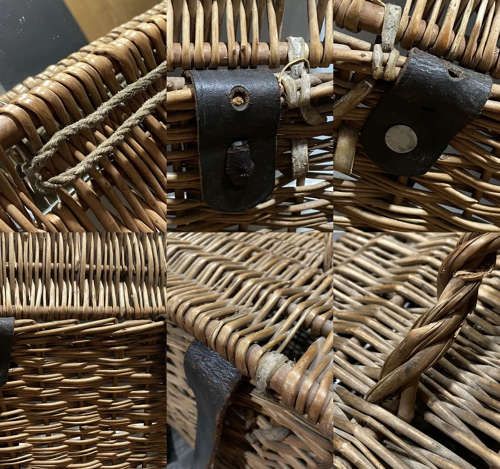 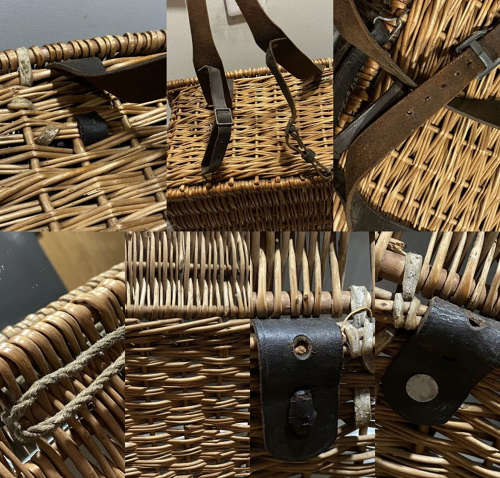 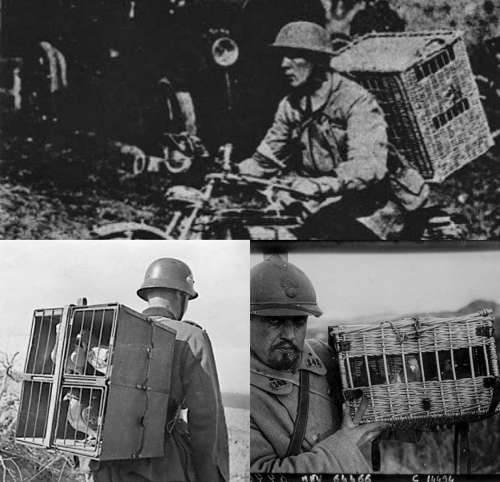 For sale is a Rare WW1 or WW2 German Carrier/ homing Pigeon Wicker Cage Basket with leather back straps and load bending suspending straps, which could attach onto the shoulders belt/ suspender equipment set. This cage basket was used for transporting homing/ carrier pigeons in between stationed company’s.

Different methods of signalling were used to communicate and one of the most ancient systems of communication used were carrier pigeons, also known as messenger pigeons. In the First World War, carrier pigeons were used to send short messages on land, in air, and at sea. On the frontline, they were mostly used for espionage and for emergency messages, from soldiers and tanks in no-man’s land and when an attack was about to take place.

The use of pigeons as method of military communications dates back over 3,000 years with the earliest recorded use of pigeons in warfare dating back to c.1150 BCE when the Sultan of Baghdad strapped capsules filled with papyrus sheets to the leg or back feathers of pigeons and used them as messengers.

thousand years ago by the Egyptians, Persians, Greeks, Romans, and others. Despite the development of optical telegraph signalling systems in France in the late eighteenth century, carrier pigeons remained popular in France. They went on to prove their worth during the four-month siege of Paris during the Franco-Prussian War in 1870-1871 when, it is said, 400 birds delivered nearly 115,000 government messages and about a million private messages.

Carrier pigeons were well regarded by the British military with a strong and illustrious tradition: carrier-pigeons were used to deliver the news of Wellington’s victory at Waterloo in 1815. By the outbreak of First World War in August 1914, the military use of carrier pigeons was well established. However, the British Army did not have a carrier pigeon service, unlike their counterparts in the French and German Armies.

In September 1914, the French Army gave 15 pigeons to the British Intelligence Service and by May 1915 a carrier pigeon service was improvised by the Second Corps during the Second Battle of Ypres. Shortly afterwards, the Carrier-Pigeon Service was officially founded under the control of the Intelligence Corps and under the directorship of Captain (later Lieutenant Colonel) Alfred H. Osman. Osman had a long-standing interest in racing pigeons: in 1898, he abandoned his career as a lawyer’s clerk and established and became first editor of the Racing Pigeon, a weekly magazine still in publication today.

In his 1928 volume, Pigeons in the Great War, Osman described the carrier pigeon service as “practically infallible” and gave an unsubstantiated delivery success rate of 95-99%. The advantages of pigeons are clear: they could fly silently through the air without indication of place of departure or destination; they did not have difficulties with shellfire or gas, and were remarkably resilient against gunfire while on the wing; they were quicker than runners, mounted orderlies or dogs; they could easily fly distances of over 50 miles; finally, they were more easily replaced than alternatives such as horses or men.

However, carrier pigeons did have some flaws: while they could be released from anywhere without the aid of wires or equipment, they had only one location of arrival – their home roost or loft. Additionally, carrier pigeons were not necessarily scalable: it took around six weeks to train a carrier pigeon as to where their home roost or loft was located. Furthermore, pigeons could only be used to carry short messages and so were mostly used on the frontline for espionage and for emergency messages.

While carrier pigeons did have particular successes with the French Army at the Battle of the Somme in 1916, and with the British Army at the Battle of Verdun in 1916, their main area of success was with the Intelligence Service. By the end of the war, there were over 22,000 pigeons, 150 mobile lofts and 400 personnel serving in the British Army Carrier Pigeon Service and over 100,000 pigeons were used by the British military services during the First World War.

Most commonly seen for the transportation of these carrier pigeons are Wicker baskets, held together with leather or dried hide, often made in the reserve trenches from French Wicker baskets and of period military leather straps, buckles and fasteners, on one occasion there’s photos of ww1 British soldiers with a Wicca basket that has the front of a khaki map case, or large pack front flaps covering the Wicker basket windows which would ultimately calm the pigeons! This is a very rare item and rarely come up for sale.

Bottom of leather back strap: 2.5cm

The photographs make up part of the description, I will describe the item the best I can and to the best of my knowledge. As the buyer please view the photos carefully before purchasing. Guaranteed original or money back. This will be sent via express 48 Parcel-force and dispatched within two to three working day’s.