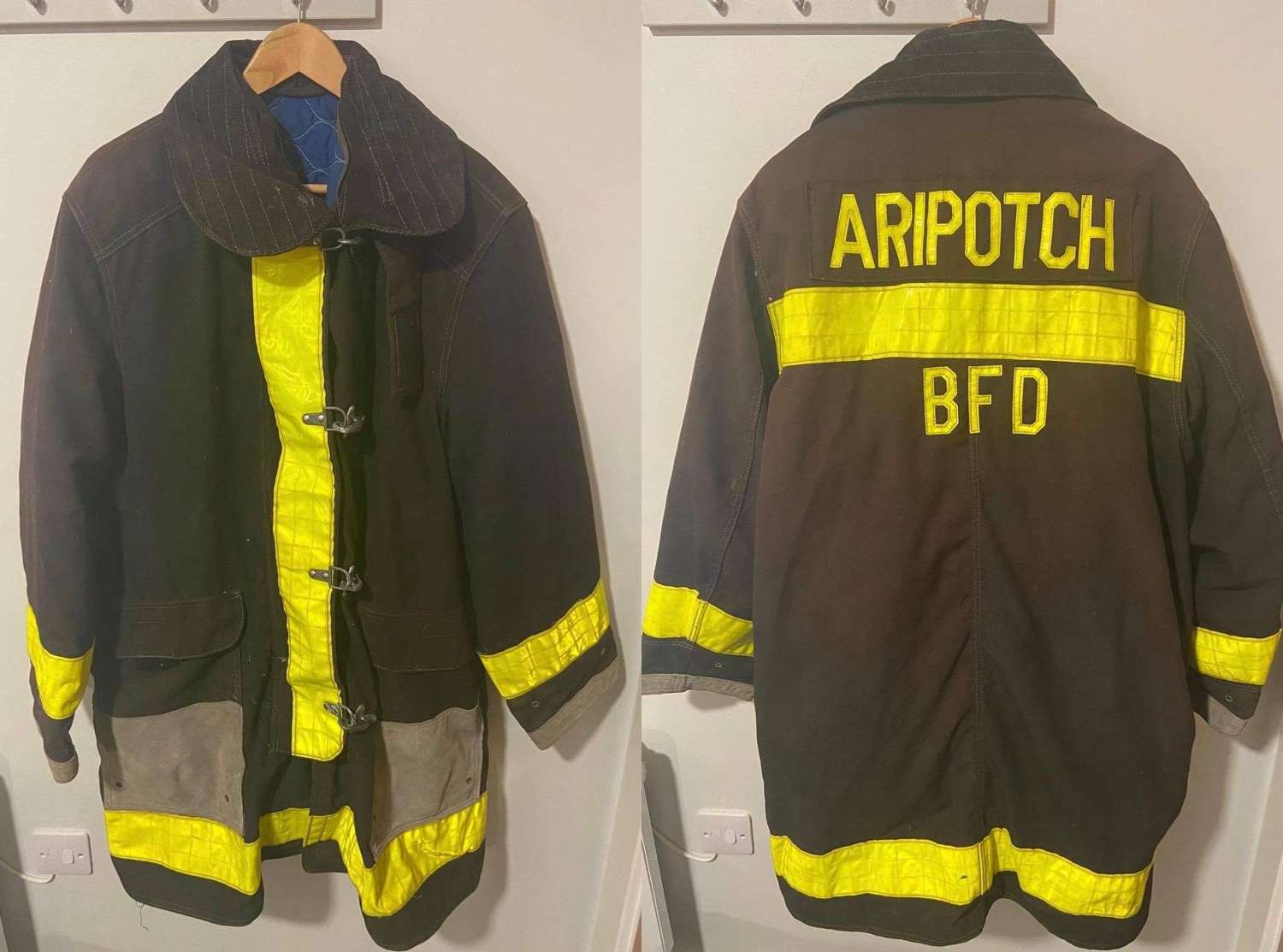 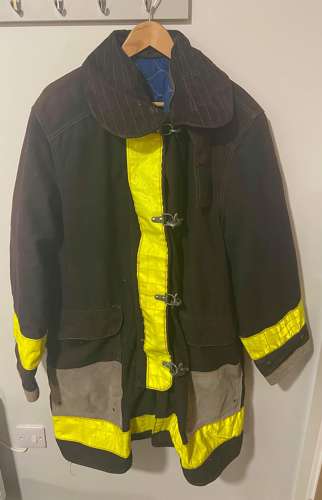 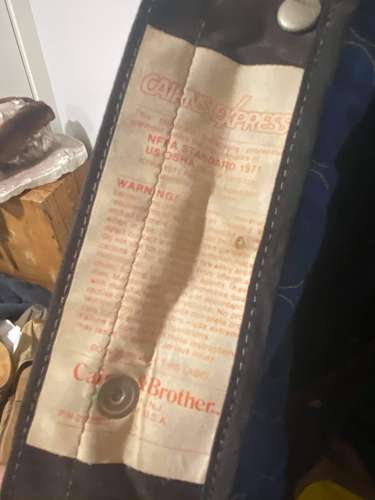 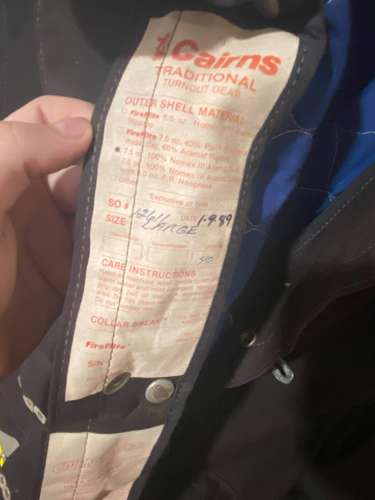 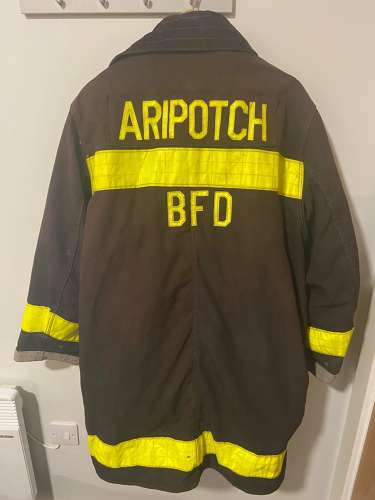 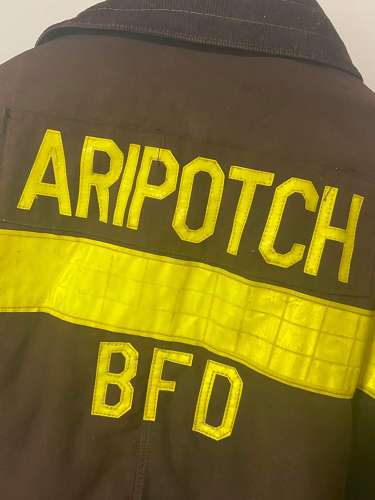 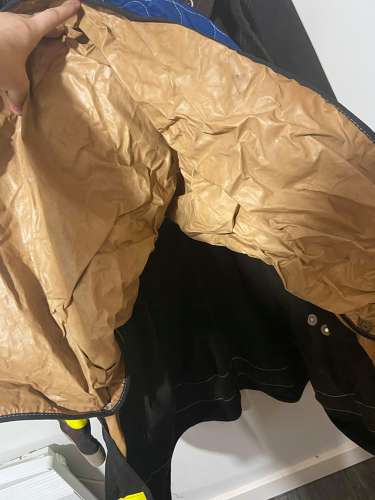 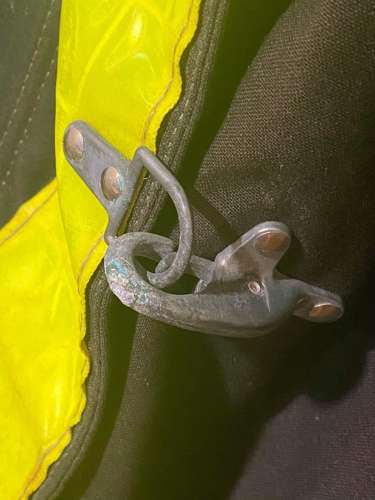 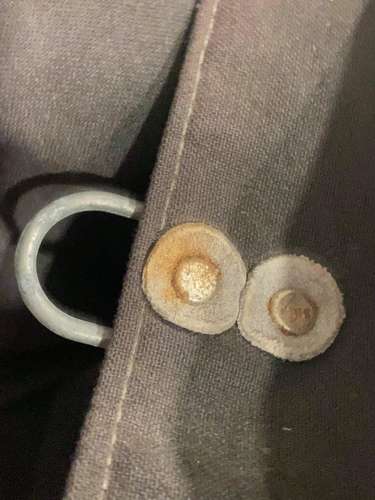 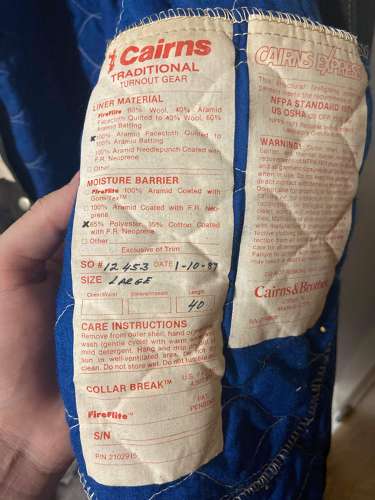 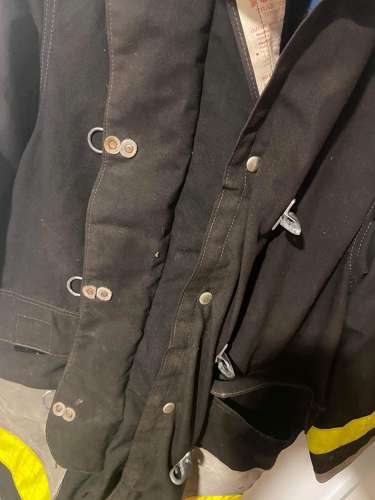 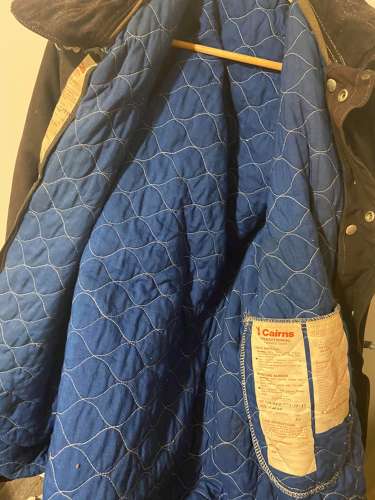 For sale is a Vintage original United States 1989 dated Large Boston Fire Department BFD Aripotch Turn Out Coat Jacket. The turn out coat is in great condition. Produced by Cairns & brothers traditional turn out gear. This fire turn out coat is named on the back to Boston fire department, New York (BFD) to Aripotch. Norman Aripotch has a long history of serving his country both for the Boston Fire department and for the US army in WW2. Norman Aripotch’s detailed history is written below:

Norman Aripotch was a man who had a great respect for history and for his community. He left his mark on both, as well as on his family, who lived in Babylon since the 1930s.

“He was an extremely humble, very humble man,” said John (Jack) Conroy, whose brother, the late Donald Conroy was a close friend of Mr. Aripotch. “He had a wonderful sense of humor and was ready to help anyone, at any time. Many considered him a dear friend.”

“The memory I keep with me forever about Dad is the lesson he taught by the way he lived his life,” said his daughter Susan. “Honesty, integrity and using our gifts are how to conduct our lives and when we live that way, all will be well.”

He was born April 6, 1927, the only child of Bertha and Benjamin Aripotch. The family lived in Prospect Heights, Brooklyn, and sometime between 1930 and 1935 moved to Babylon where Mr. Aripotch grew up on George Street. He graduated from Babylon High School in 1945, and studied at Adelphi University.

In 1945, he enlisted in the U.S. Army and served in Germany and France as a rifle marksman. He was honorably discharged in 1946.

He took over the family business, Babylon Paint & Hardware on Deer Park Avenue from the 1970s until 1999 when he sold it. The store closed in 2010.

“He was the first Eagle Scout in Suffolk County,” said his longtime friend and neighbor Gene Cuneo. “He loved Babylon and he did whatever he could to help his community.”

One of those things was to become a volunteer with the Babylon Fire Department, serving in Phoenix Hose Company for 50 years. “He brought me into the department,” recalls Cuneo.

“My parents were both great at teaching us the value of the dollar and how to help others,” said his son Jim, who followed in his father’s footsteps and became a volunteer in the Babylon Fire Department serving in the Phoenix Hose Company for the last 35 years. He added that his father was a wealth of knowledge and loved history.

“He always made us feel like we were a part of the community and taught us that it is important to volunteer and give back,” said his son Steve, who now lives in New York City and volunteers with the garden committee at his coop, in addition to working to keep a park near his home clean and safe. “We just knew from his example that it is important to get involved and to make your community a better place.”

In addition to the time they spent in the fire department Conroy and Mr. Aripotch volunteered on the Babylon Conklin House Committee together and the two would undertake numerous projects to build and improve the facility, including building the barn.

“He was in charge of decisions for maintenance of the house because of his experience in the paint business and was very skillful at woodworking.”

As a younger man, he worked as a lifeguard on Fire Island where he met his future wife Mary Bell. She worked in the concessions. The couple married in 1955 and moved to Wyandanch Avenue in Babylon 1959, where they met the Cuneos.

“Our families had more than a 50-year friendship,” said Cuneo. “We will miss him.”

When he wasn’t working or volunteering in the fire department, with the Conklin House or as a volunteer with the North Shore Land Alliance, Mr. Aripotch enjoyed duck hunting and carving bird decoys, one of which sits in the front window of the Cuneo’s home. “It was placed there to watch over Norm,” said Cuneo.

He was a member of the Long Island Decoy Collectors Association and the Nature Conservancy, an indication of his deep respect for the nature he saw around him as a resident of Babylon and living near the Great South Bay. He also organized a group of volunteers to erect osprey nesting poles around the Great South Bay.

Mr. Aripotch is survived by his children, David and his wife Bonnie Brady of Montauk, Susan of Northeast Harbor, Maine; Steven and his husband Bruce of Manhattan and James of Babylon, as well as by eight grandchildren.

His wife Mary predeceased him in 2014.

He reposed at the Claude R. Boyd-Spencer Funeral Home, 448 West Main St., Babylon on Jan. 11. Firematic services were held there. Cremation services were private. The family has requested that memorial donations in Mr. Aripotch’s name be made to the Conklin House, 280 Deer Park Ave., Babylon, NY 11702.

They are similar to the fire fighting jackets in the movie Backdraft. This jacket was used around the same time as this movie. This is in good condition, has a few heat marks on the yellow reflective banding so it has been in real fires! The blue fire retardant nomex lining is in excellent condition as well, this can all be removed from the outer shell. All the metal clips, buttons and Velcro are still in good condition as well. Recently purchased from New York City.

This is the chance to own a good condition vintage BFD turnout coat, but also a chance to own a great piece of history for a man that served his country and his community to the upmost best. This will be sent via express 48 and dispatched within two to three working day’s.