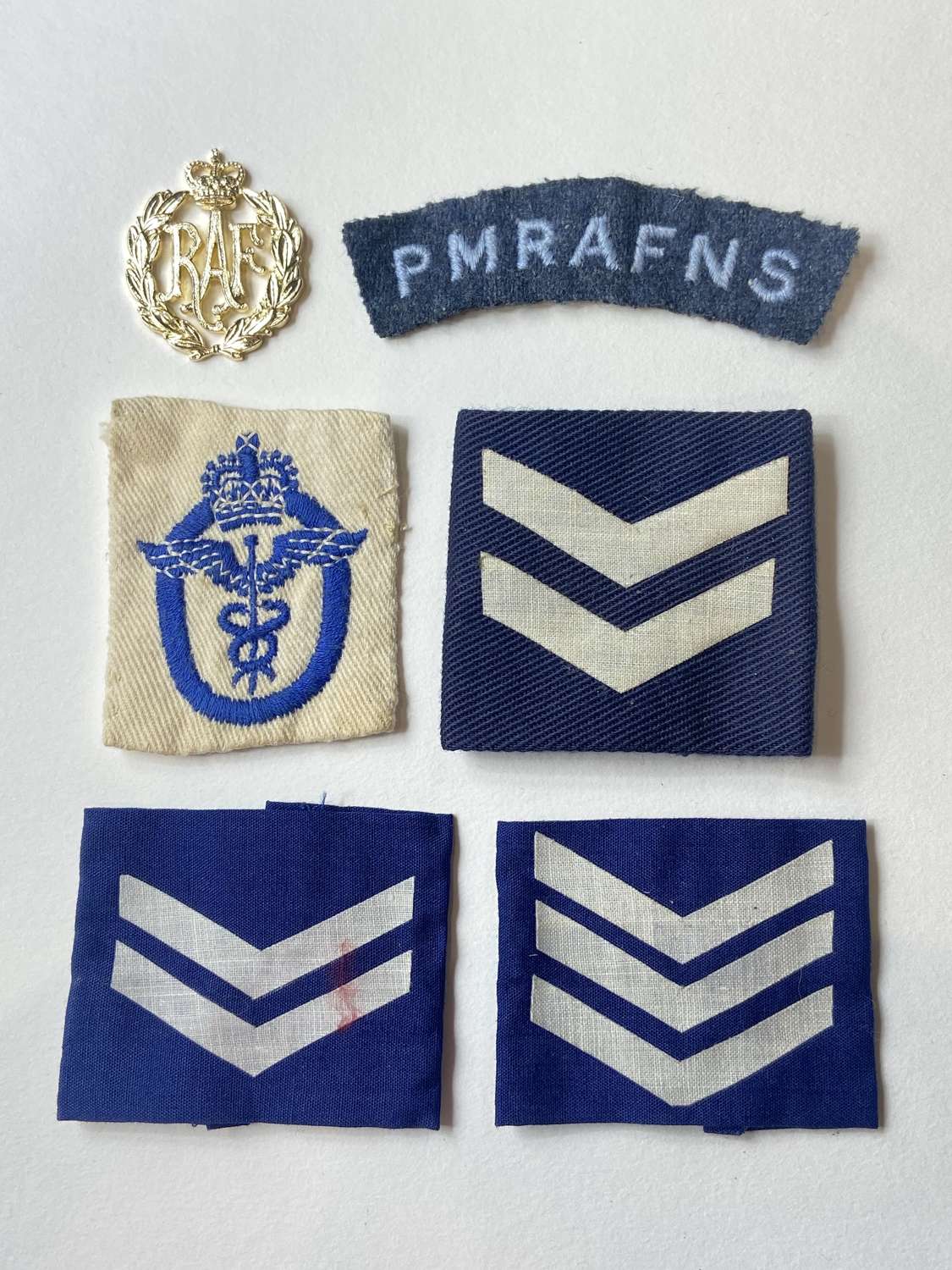 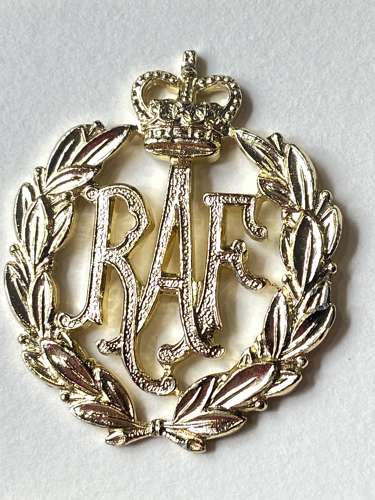 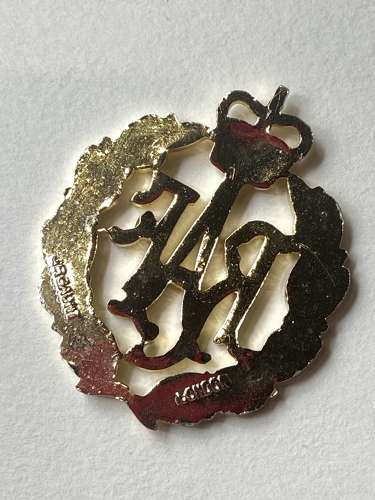 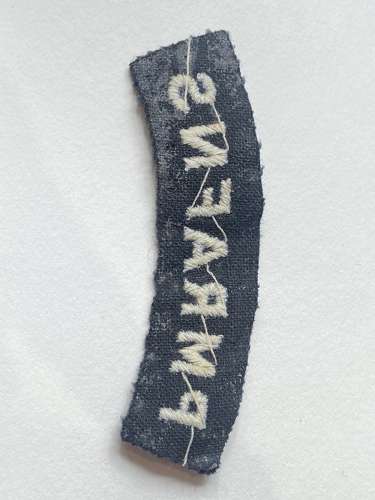 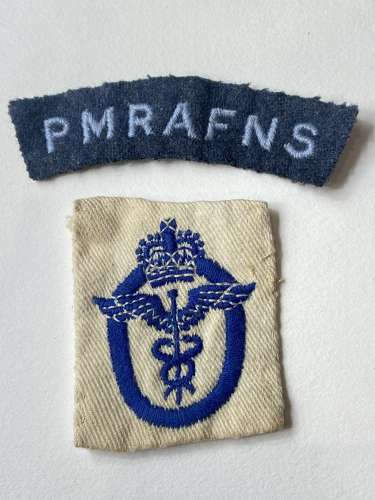 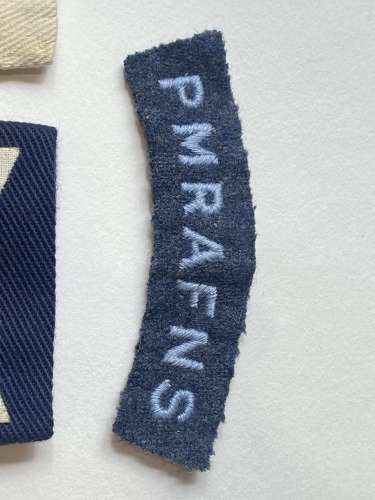 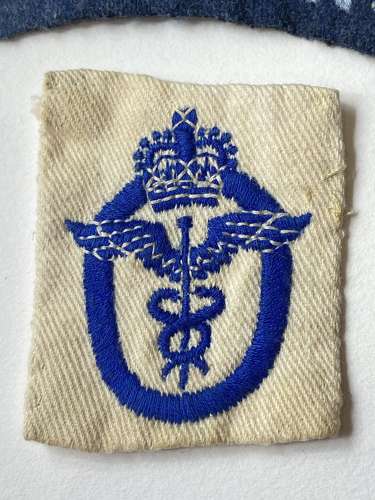 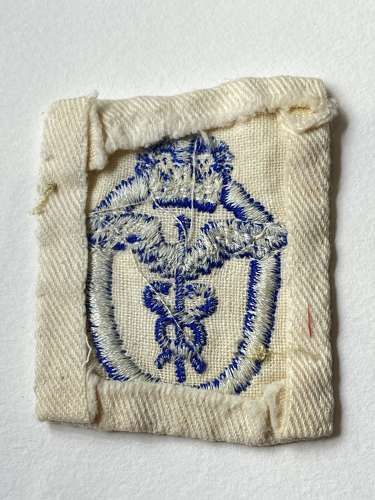 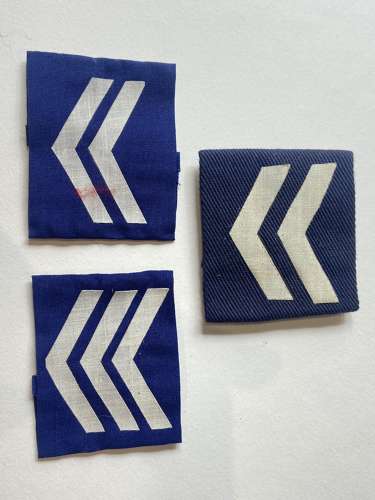 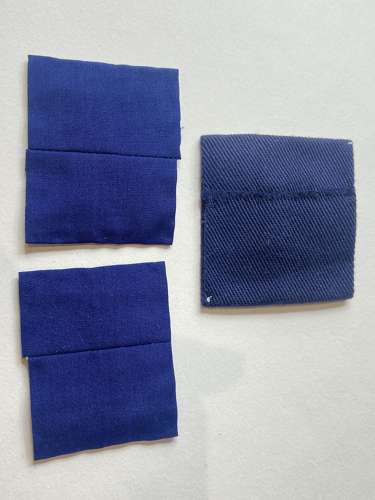 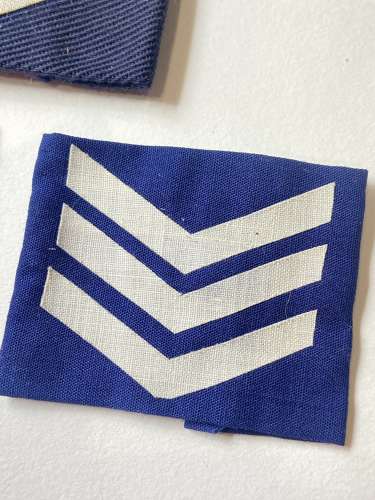 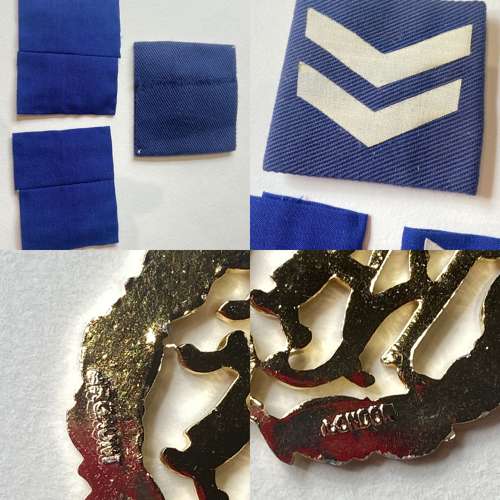 £45.00 Approx $55.49, €53.13, £45
(1 in stock)
Qty
For sale is a small grouping of WW2 and post ww2 British Princess Mary’s Royal Air Force Nursing Service (PMRAFNS)  Patches. This grouping includes:
1. PMRAF (Princess Mary's RAF Nursing Service) Ward uniform Patch Medical Proficiency. A good original Elizabeth II period 'Princess Marys Royal Air Force Nursing Service cloth nurse's uniform badge'; blue silk embroidered ring surmounted by a 'Queen's Crown', the centre bearing a 'caduceus' all on white woven cotton backing turned and stiffened with hessian lining. Very good used condition. Size 58mm x 44mm. Female members of the service wore this badge on their left front shoulder of the Ward Dress 2D.
2. PMRAF shoulder title patch
3.  Stitch on RAF Queens crown stay right badge proficiency (no attachments designed on back)
4. Three PMRAF slip on rank chevrons
History of PMRAFNS:
Princess Mary’s Royal Air Force Nursing Service (PMRAFNS) is the nursing branch of the Royal Air Force. It was established as the RAF Temporary Nursing Service in 1918 and became part of the permanent establishment as the RAF Nursing Service on 27 January 1921. It received the royal prefix after Princess Mary agreed to become its Patron in June 1923.
RAFNS Nurses were posted to Iraq in 1922 and the first Aeromed service was created at RAF Halton in 1925.
Under the Defence (Women’s Forces) Regulations of 1941 emergency commissions were granted.  PMs wear rank but are addressed by professional titles; e.g., Matron, Sister etc.  Married PMs were allowed to stay, for the duration of the War, in the PMRAFNS.   Strength in 1943 was 1,126  Sisters staffing 31 RAF Hospitals and 71 Station Sick Quarters.  300,000 casevacs were carried out after D-Day, the largest ever carried out in the history of the Service.
The Womens’ Service was integrated into the RAF on 1 February 1949.  PMs held commissions and wore female officer badges of rank, but continued to use professional titles in the clinical environment.
In the Korean War, PMs were used as Flight Nursing Officers for the first time and sea trooping of casualties and long haul aeromeds commenced.  Aeromed training began at RAF Lyneham in 1959.
The number of RAF hospitals began to reduce from 1968 onward in line with the reduced commitment of the RAF abroad.  Male RAF nurses were integrated into the PMRAFNS in 1980 and female officers adopted male rank titles.
An Aeromed chain via Montevideo and Ascension was established for the Falklands War in 1982.  PMs became part of the tri-Service Defence Nursing Services in 1985. In the 1991 Gulf War, the aeromed chain began at the RAF War Hospital Murharraq in Saudi Arabia and extended to PMRAFH via RAF Brize Norton.
RAFH Ely closed in 1992.  PMs were sent to the Bosnian War in 1995 and Kosovo in 1999.
RAFHs Wegberg, Halton and Wroughton were closed in 1996 under the post-Cold War Defence Costs Studies.  PMRAFH at RAF Akrotiri became The Princess Mary’s Hospital (TPMH), a tri-Service hospital.
The closure of Royal Hospital Haslar, the last remaining military hospital in the UK, was announced in 1998.  Haslar Hospital is now part of the Portsmouth Hospitals NHS Trust whilst there is still a Navy, Military and Air Force medical and nursing presence at nearby MDHU Portsmouth. There are still some Navy, RAF and Army service personnel working at Royal Hospital Haslar until it closes finally in 2009.
An aeromed chain via Oman, RAF Akrotiri and RAF Brize Norton was established for the post-9/11 invasion of Afghanistan.  The Royal Centre for Defence Medicine in Birmingham was the receiving hospital.
In the 2nd Gulf War the aeromed chain via Kuwait, RAF Akrotiri (TPMH used as a holding facility for injured troops, prior to onward move to the UK).  RAMP system used to distribute injured throughout NHS hospitals in the UK.
This grouping is all in good condition. This lot will be sent via Royal Mail 1st class signed for and dispatched within two working days.