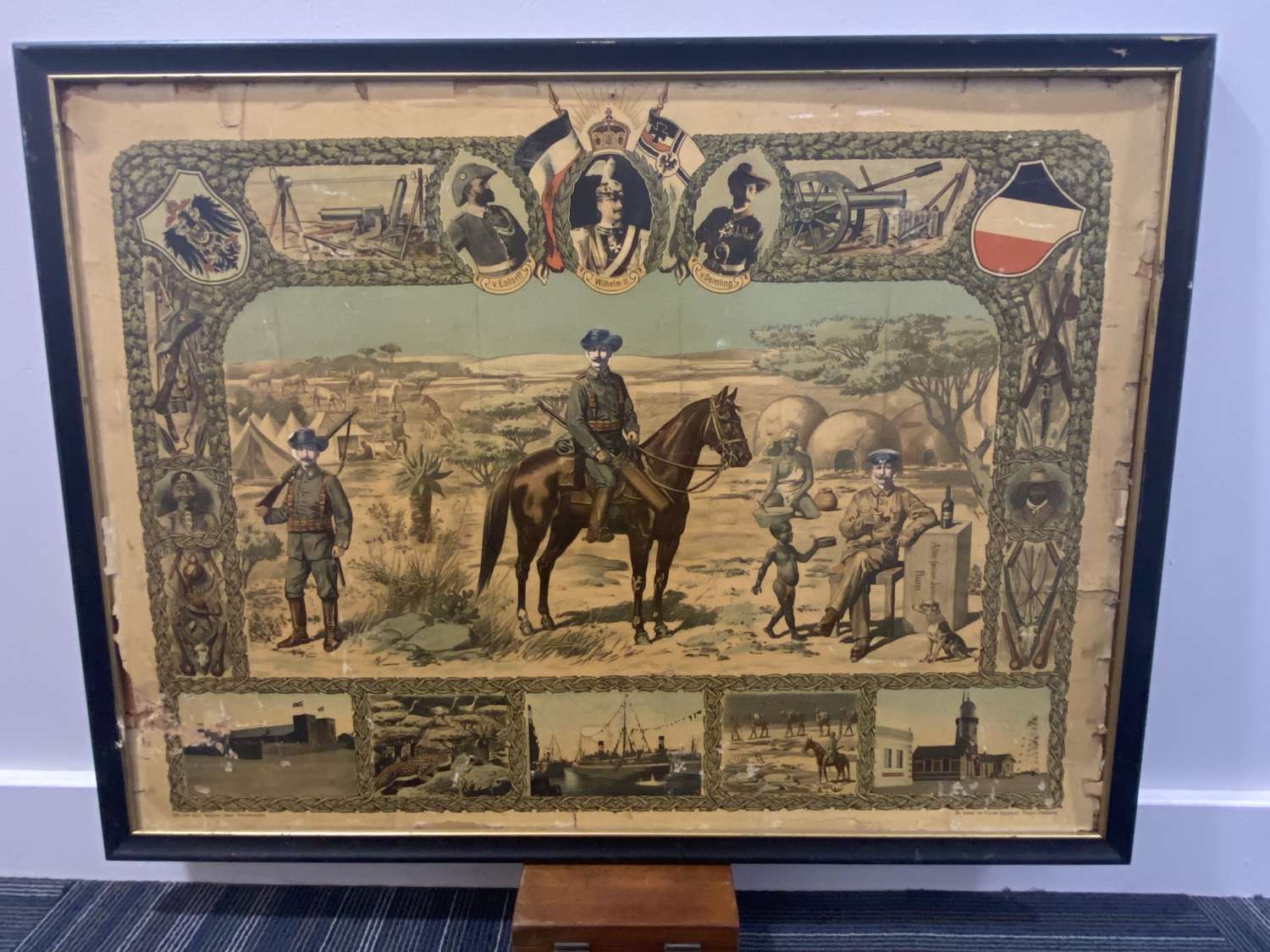 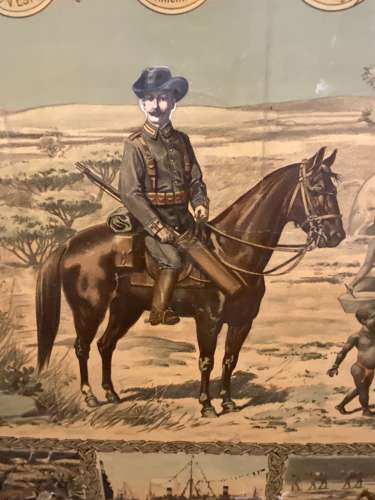 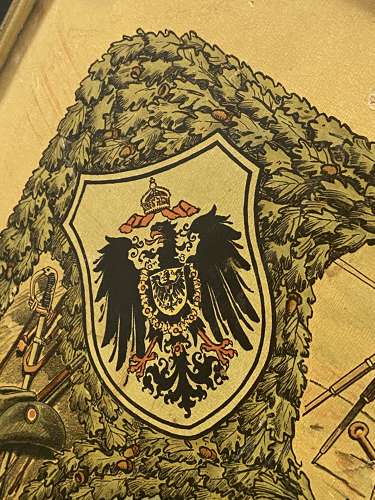 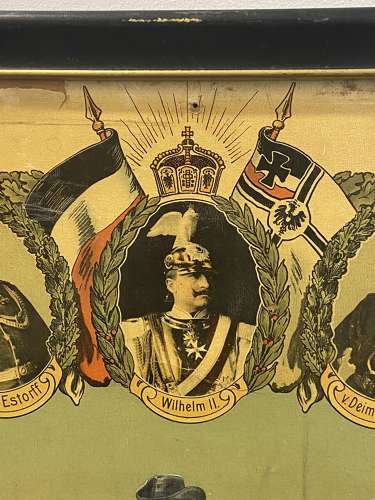 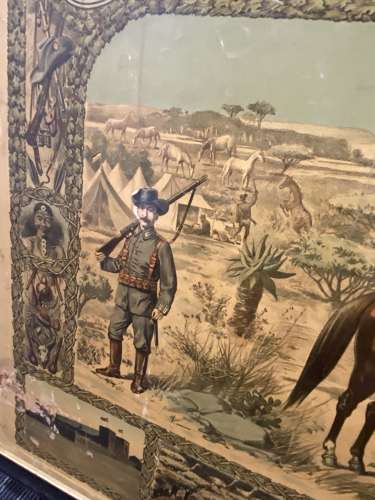 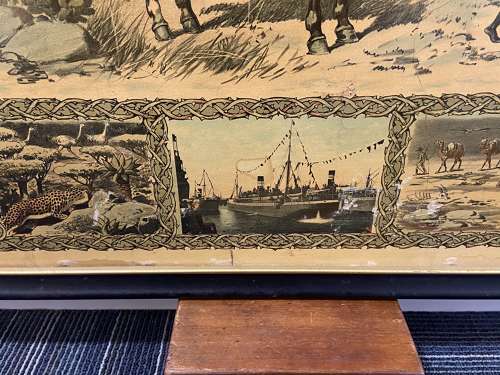 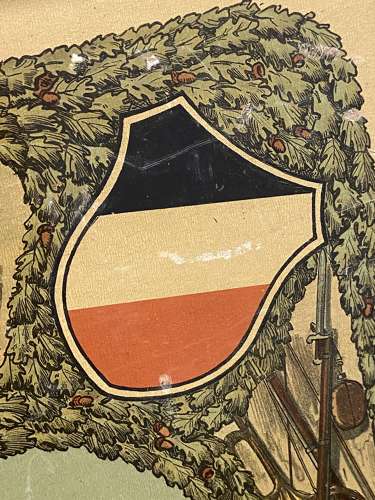 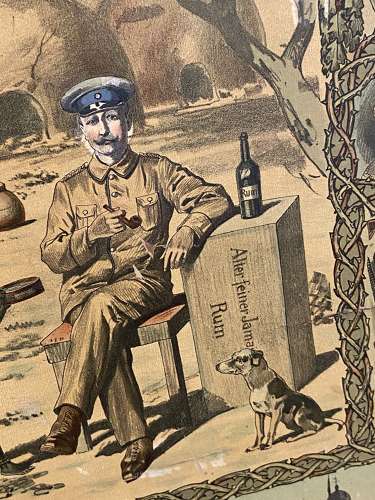 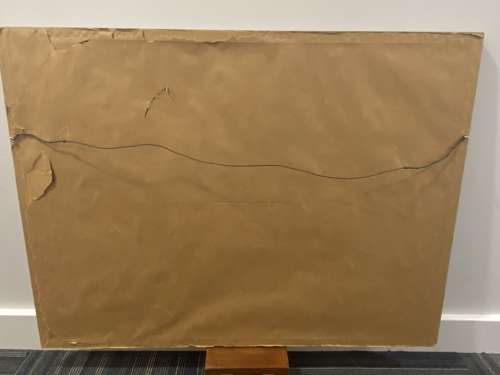 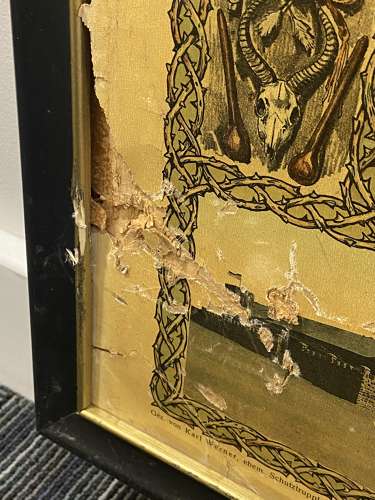 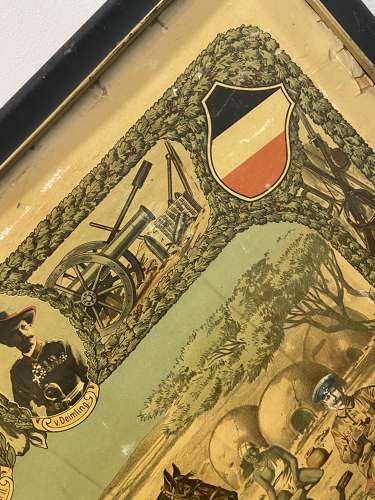 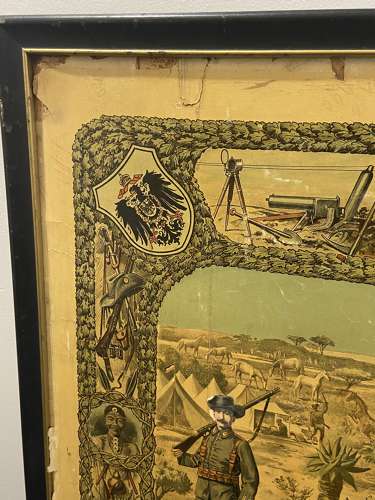 For sale is a rare Pre Ww1 1903 to 1907 Commemorative poster print remembering the service of Unteroffizier Hermes of the Schutztruppe Field signals Abteilung in German south west Africa presented in a black wooden frame. Measuring: 84cm length x height 63cm x 3cm width. The poster is still vibrant in colour, however there is damage to the left hand corner please see photos, small chips around the sides where the nails had come out of place etc please see photos for more details. The damage doesnt detract from the value of this beautiful rare piece.

This beautiful print/ lithograph Depicting German South west Africa. At the top of the commemorative poster is Ludwig Von Estorff, William II and Berthold Von Deimling who all played a huge role in German South west Africa. (Info on there roles below.) At either side of these three historical figures are large cannons & machine guns as a symbol of the German empires strength. In the left corner is a imperial Prussian eagle in a shield and a Prussian German empire flag in a shield on the right. Around the edges of the print is a boarder of oak leaves with illustrations of both patriotic German and Patriotic African Imagery combined.

On May 31, 1894, he was transferred to the protection force of German South West Africa. From 4 June 1894 to 9 July 1899, he was appointed company chief. After his return to Germany, he returned to the Grand General Staff on 13 September 1899, where he was promoted to major on 27 January 1900 and transferred to the High Command of the Protection Forces on 18 April of the same year. From there he joined the protection force in German East Africa on 9 June 1900 and to German South-West Africa on 12 March 1901. On February 6, 1902, he was appointed to represent the commander of the local protection force. On June 25, 1904, he was appointed battalion commander in the 1st Field Regiment. As such, he took part in the Battle of the Waterberg in August 1904. In the war against the Herero, Estorff led one of the three main divisions of the Protection Force, the Western Division, which included the 2nd and 4th Field Companies, a company of the Naval Battalion. Their goal was to pacify the Omarurudistrict. He was instructed by Lothar von Trotha to follow the fleeing Herero in the almost waterless Omaheke desert and "keep them from the scene. to chase away the water points found there" – a practice that cost the lives of many thousands of Herero.

Wilhelm II (Friedrich Wilhelm Viktor Albert; 27 January 1859 – 4 June 1941), anglicised as William II, was the last German Emperor (Kaiser) and King of Prussia. His reign lasted from 15 June 1888 to 9 November 1918. Despite securing Germany’s status as a great power by building a blue-water navy and promoting scientific innovation, his tactless public statements and reckless foreign policy antagonized the international community and ultimately plunged his country into the First World War.

Deimling, in the spirit of the emperor and the commander-in-chief, Lieutenant General Lothar von Trotha, distinguished himself by relentless toughness both against the indigenous enemy and against his own soldiers, which quickly earned him the rejection of the "Old Africans", the long-standing protection officer, but also the recognition "of the highest authority". He knew how to turn failures and failures into successes. After the end of the Herero campaign, he was assigned as deputy commander-in-chief to crush the Nama Uprising. Despite frequent reports of victory, he had to recognize the company's hopelessness and was released to Germany because of an "injured shoulder". Because of his merits, he was elevated to the nobility by the emperor. After his recovery, he replaced the disgraced Trotha as commander of the protection force in the colony of German-Southwest Africa, with the emperor's instruction to end the unpopular war in the fastest way through negotiations and concessions.

This will be sent via express 48 parcel force and dispatched within 2-3 working days. Dont miss out on this beautiful piece, as they do not come up for sale often, the last one that previously sold- sold in 2018 for 480 euros!