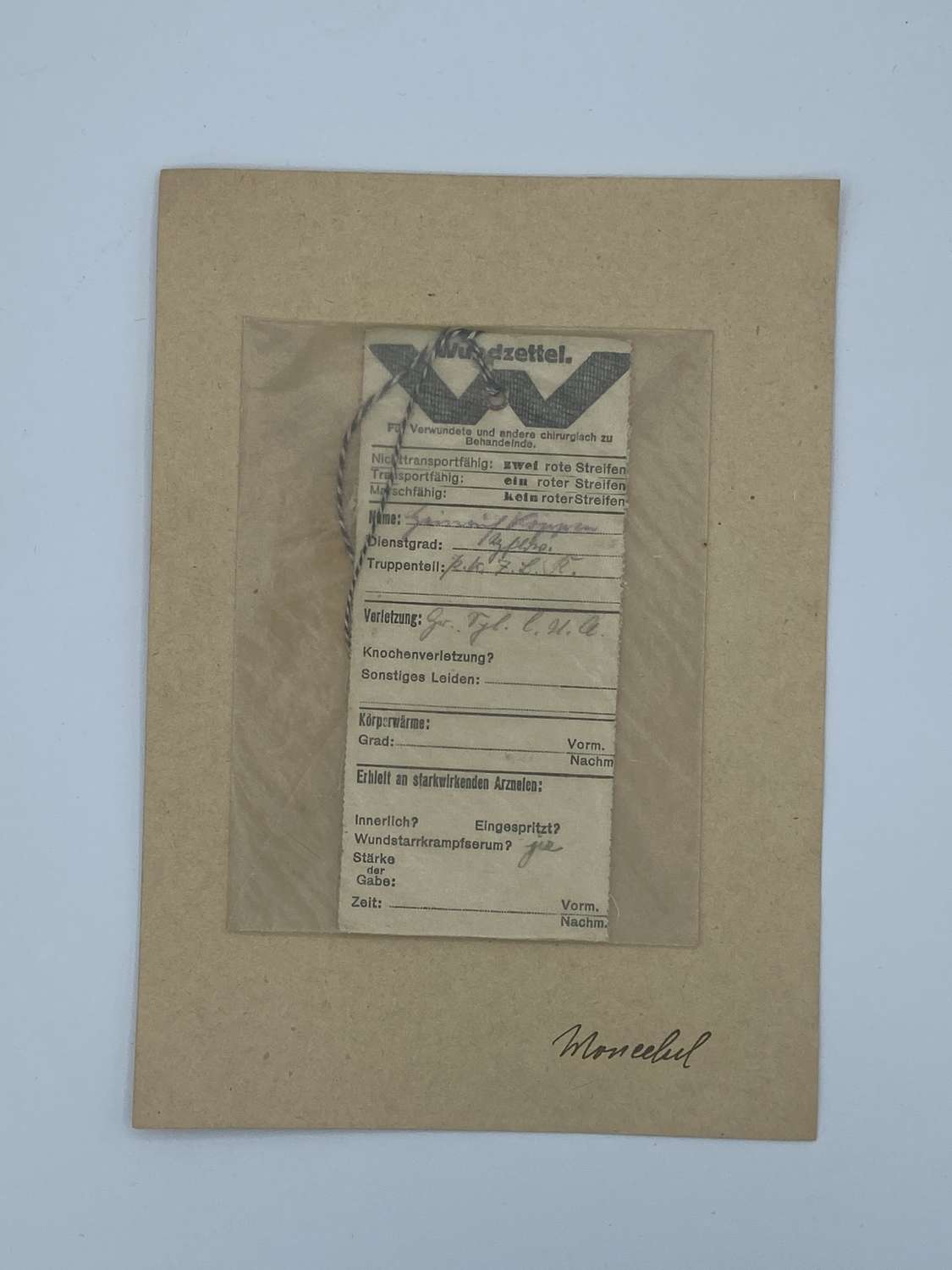 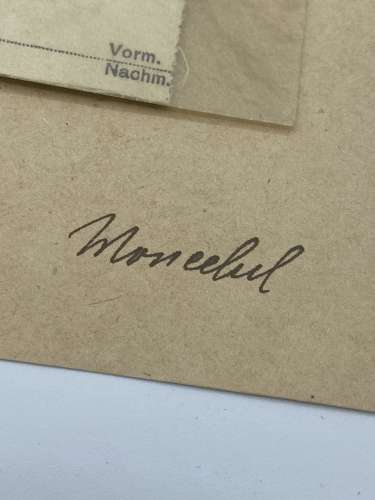 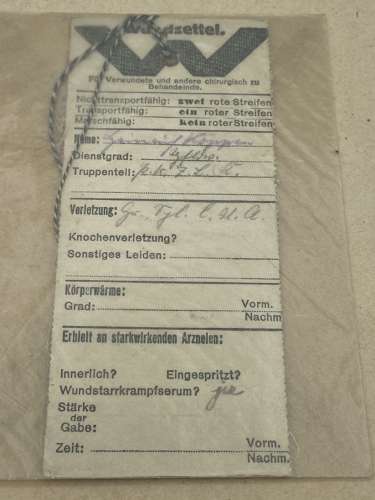 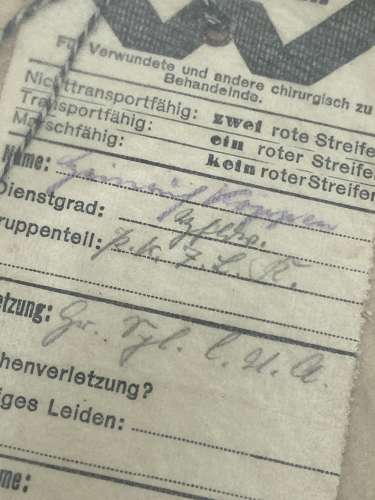 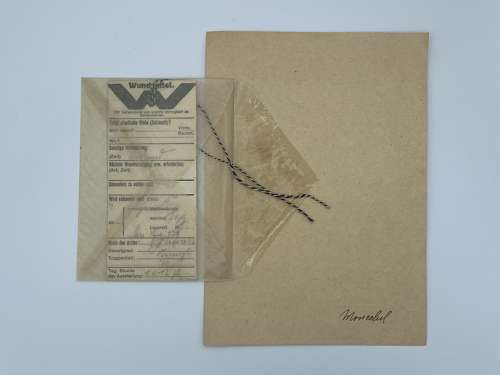 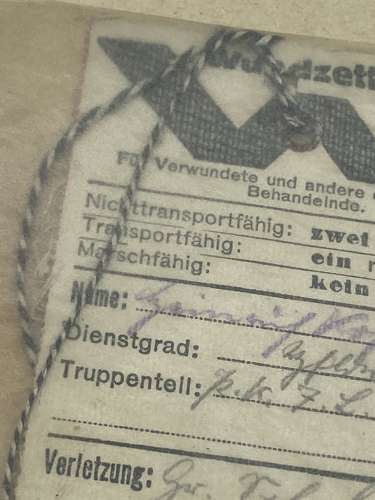 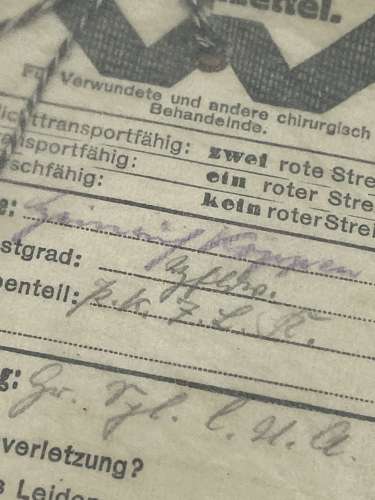 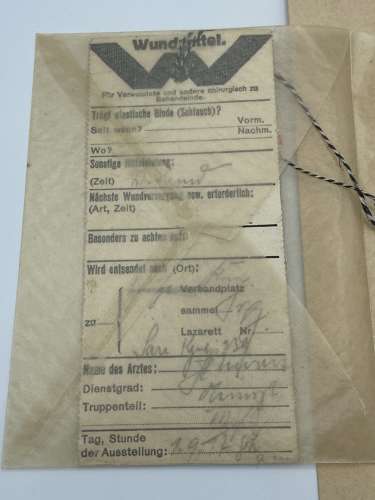 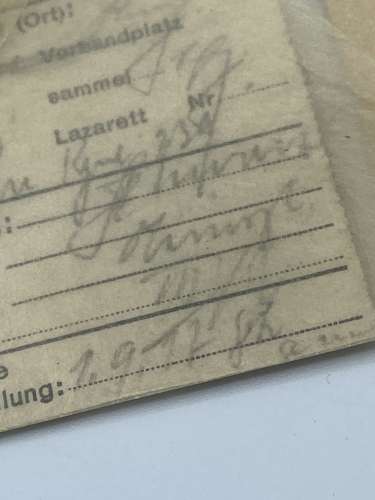 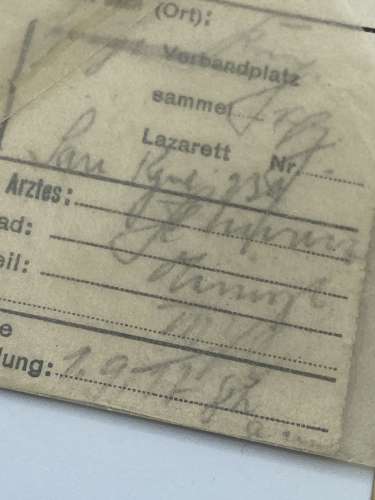 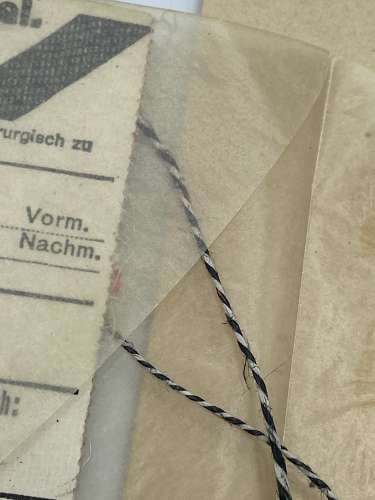 For sale is a very Rare Issued WW1 German Wounded & Hospitalised Tag In Envelope Wundzettel. After a big battle of event, there would always be casualties, and the wounded would come flooding in, to help identify which soldiers needed to be prioritised for treatment and surgery doctors, medics, nurses and surgeons and this note tag would be tied to the soldiers jacket. A "Wundzettel" was tied in the jacket of all wounded soldiers. The note described the nature of the wound and the treatment so far. The red stripes were perforated and could be removed depending on the condition of the soldier. Two red lines indicated that the soldier was not to be transported. A red line indicated that he had to be transported. If both red lines were removed, the soldier was able to move on his own.

This wounded TAG belonged to a Mr Koppen, who was in unit P.K.7.L.R, in which he was wounded and tagged on the 1st of September 1917 at the Battle of Jugla. This was a defensive battle of the Russian Republic's 12th Army of the First World War from 1 to 3 September 1917. It was part of the German offensive called the Battle of Riga or Schlacht um Riga. The main objective for the Russian 12th Army was to prevent the German 8th Army from forcing the Daugava river and besieging Russian troops in Riga. The result ended in a German victory. The Germans had approximately 60,000 men against the 192,000 Russians, with the Germans suffering with 5,000 losses and casualties and the Russians suffering with 25,000 casualties and losses. The battle took place at the banks of the river Mazā Jugla. One of the main units involved was a brigade of 6,000 Latvian Riflemen from the 2nd Latvian Rifles under the command of Ansis Lielgalvis.

German generals began to prepare for the battle as early as December 1916. It was decided to force the Daugava River at Ikšķile and quickly advance north and northwest. This had two main intended purposes: to cause the surrender of the Russian 12th Army and to capture Riga. This would also afford the benefit of straightening the German front line, which would allow a number of German divisions to be freed up and sent to France, where ultimately the fate of the war would be determined. On the morning of 1 September 1917, after a three-hour artillery bombardment, the Germans launched the assault and began the construction of three wooden pontoon bridges over the river Daugava near Ikšķile. 1159 German artillery guns fully suppressed 66 opposing Russian guns. Artillery fire forced Russian 186th Division to withdraw from the right bank of the Daugava, thus allowing the Germans to successfully cross the river. The commander of the Russian 12th Army, General Parsky, ordered the XLIII Army corps to counterattack the German bridgehead and deployed for this task four infantry divisions as well as the 2nd Latvian Rifleman Brigade.

The Russian force, including the Latvian brigade, received orders in the afternoon of 1 September and started to move from Ropaži against the Germans. The 5th Zemgale Latvian Riflemen Regiment reached fortified German positions along the river Jugla in the late afternoon. After heavy shelling at midday of 2 September by German artillery, the German attack against Latvian Rifleman positions started. Intense fighting started along the entire 14 km front line of the bridgehead. The Germans used aviation, flame throwers and gas attacks but despite this, the Latvian Riflemen managed to hold back the German advance for 26 hours. This allowed the 12th Russian Army (including 1st Latvian Rifleman Brigade which still was in the Tīrelis swamp positions near Olaine) to safely withdraw from Riga.

In the morning of 3 September, the Latvian units were ordered to retreat and they took up new defensive positions near Sigulda and Cēsis. The Battle of Jugla inflicted heavy casualties upon the Latvian rifleman units. The 5th Zemgale and 6th Tukums regiments lost more than half of their order of battle. The 7th Bauskas and 8th Valmiera regiments also suffered heavy casualties. Riga had been lost to the advancing Germans. However, an important objective had been accomplished, as the Russian 12th Army had managed to withdraw intact from Riga and managed to safely retreat to Vidzeme.

This is a great piece of history, with the original rice paper envelope and paper mount, marked wounded. Guaranteed original or money back guaranteed. This will be sent 1st class signed for and dispatched within two to three working day’s.