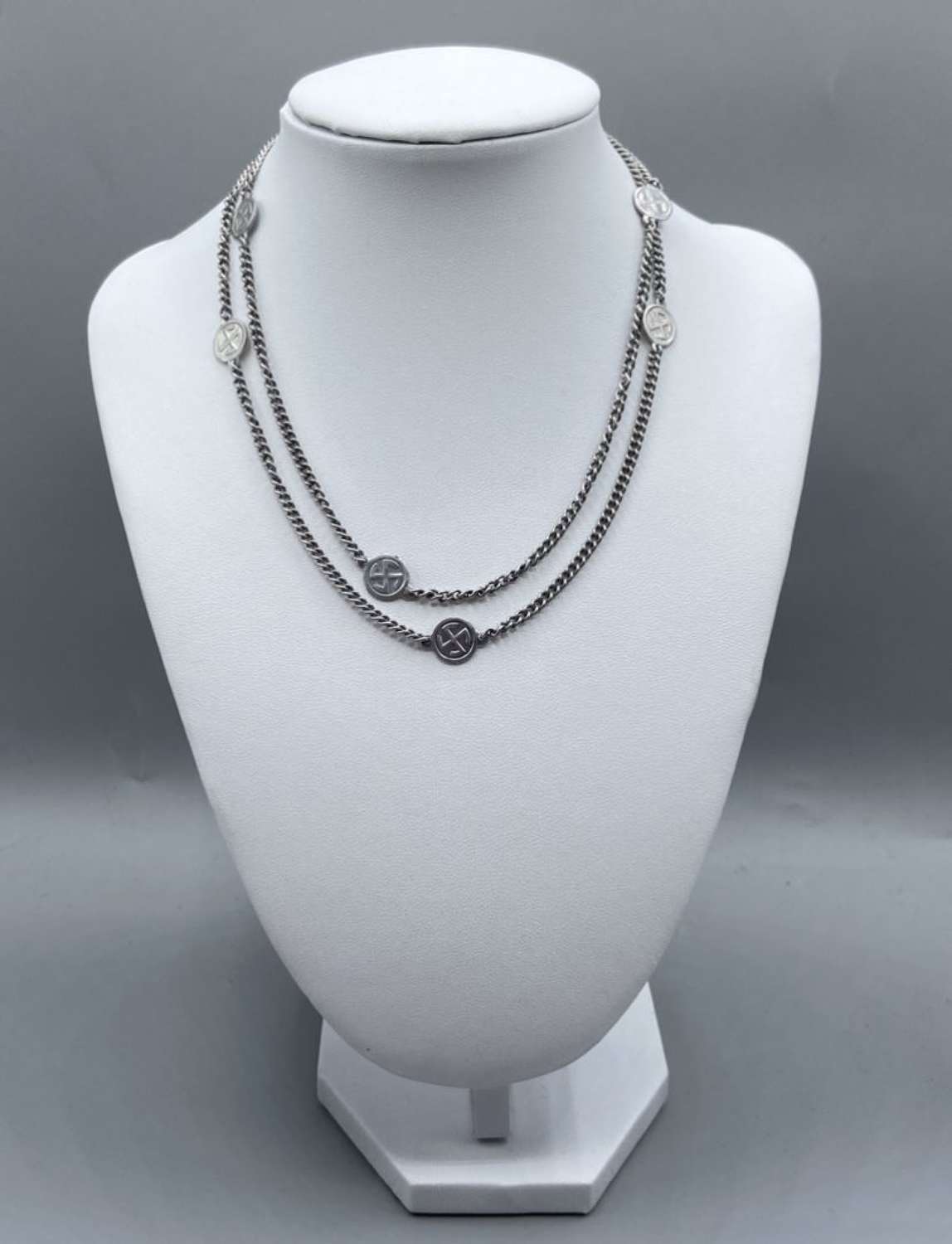 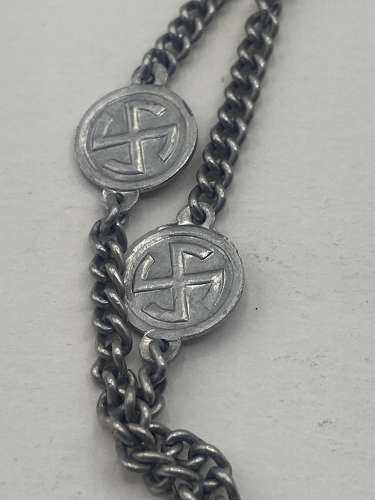 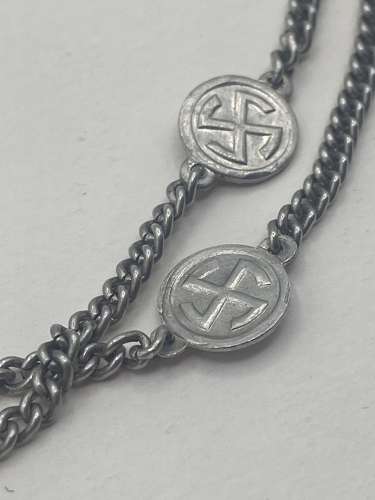 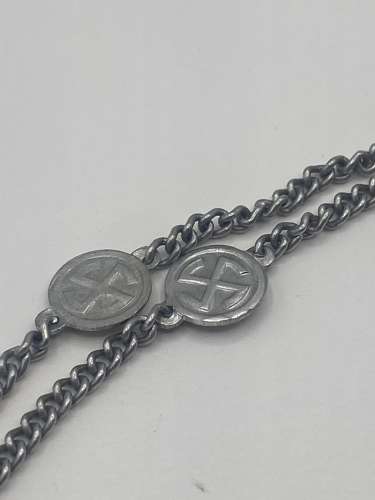 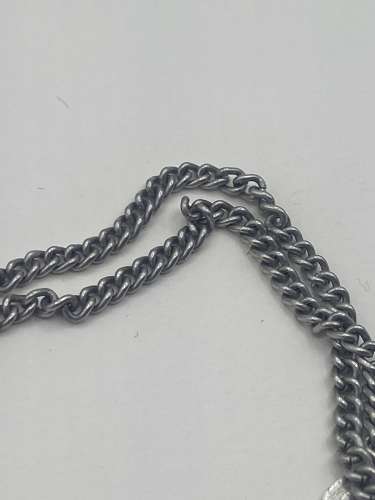 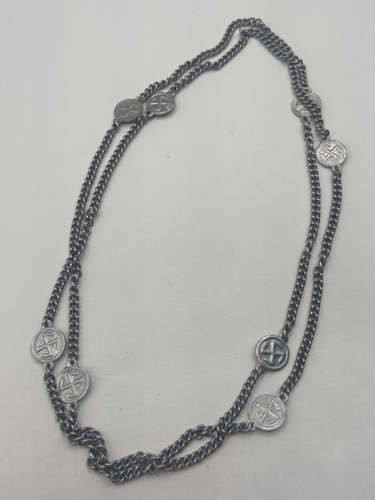 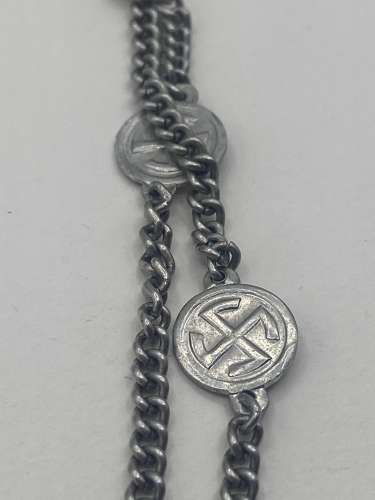 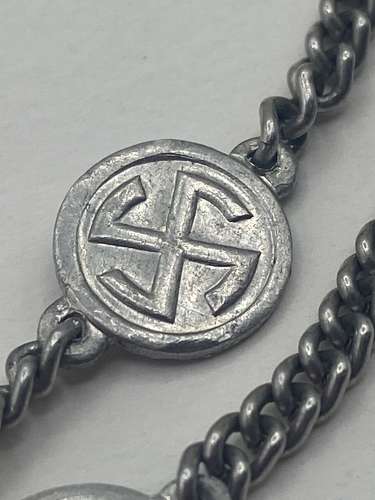 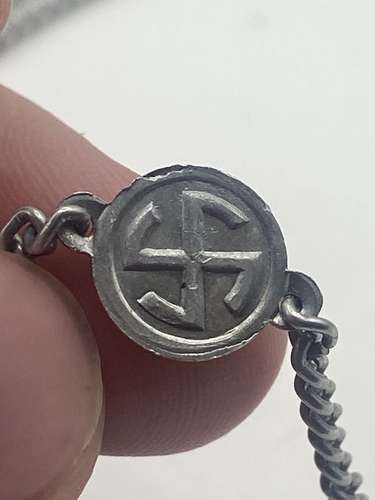 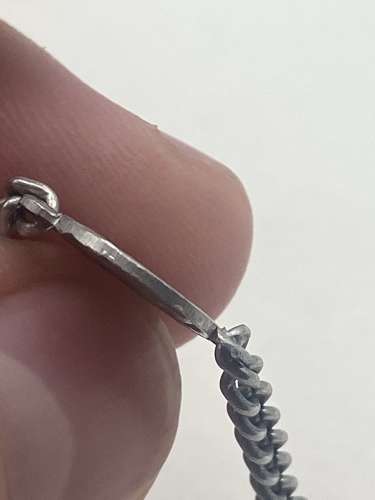 For Sale is an incredibly rare WW2 German 5th SS Panzer Division Wiking Sweethearts Necklace. This rare original piece hosts 8 5th SS panzer division unit insignia swastikas on. This has been constructed out of for struck aluminium alloy base that has been silver washed, very similar to how the early German day badges were made. This would have been made for sweethearts of the 5th SS Panzer Division as a memento of there lovers/ families Unit.

About 5th SS Panzer Division:
The 5th SS Panzer Division Wiking (German: 5. SS-Panzerdivision Wiking) or SS Division Wiking was an infantry and later an armoured division among the thirty-eight Waffen-SS divisions of Nazi Germany. It was recruited from foreign volunteers in Denmark, Norway, Sweden, Finland, Estonia, the Netherlands and Belgium under the command of German officers. During World War II, the division served on the Eastern Front.
In early 1943, the division fell back to Ukraine south of Kharkov, recently abandoned by the II SS Panzer Corps commanded by Paul Hausser. In the remaining weeks of February, the Corps, including Wiking, engaged Mobile Group Popov, the major Soviet armoured force named after Markian Popov during the Third Battle of Kharkov. As the post-Stalingrad Soviet offensive exhausted itself, Manstein was able to stabilize the front.
In 1943, Herbert Gille was appointed to command the division. The SS Regiment Nordland, along with its commander Fritz von Scholz, were removed from the division and used as the nucleus for the new SS Division Nordland. The Finnish Volunteer Battalion was also withdrawn and they were replaced by the Estonian Battalion Narwa.
In the summer of 1943, the division, along with the 23rd Panzer Division, formed the reserve for Manstein's Army Group in Operation Citadel. Immediately following the German failure in the Battle of Kursk, the Red Army launched two counter-offensives, Operation Kutuzov and Operation Rumyantsev. Wiking, together with the SS Divisions Totenkopf and Das Reich, was sent to the Mius-Bogodukhov sector. The Soviets took Kharkov on 23 August and began advancing towards the Dnieper.
In October the division was pulled out to a quiet sector of the line just as the Dnieper–Carpathian Offensive overtook Army Group South. In the aftermath of the fall of Kiev in late December 1943, the 1st and 2nd Ukrainian Fronts of the Red Army encircled several German divisions during the Battle of the Korsun–Cherkassy Pocket in January 1944. Over 60,000 soldiers, including the Wiking division, were trapped along the Dnieper River. Roughly half of German forces broke out of the encirclement. Similar to other formations in the pocket, Wiking suffered heavy casualties and lost nearly all of its heavy equipment.
On 13 February 1945, the division was ordered west to Lake Balaton, where Oberstgruppenführer Sepp Dietrich's 6th SS Panzer Army was preparing Operation Spring Awakening, an offensive at Lake Balaton. Gille's remained as a support to the 6th SS Panzer Army during the beginning of the operation. Dietrich's army made "good progress" at first, but as they drew near the Danube, the combination of the muddy terrain and strong Soviet resistance ground them to a halt. The division performed a holding operation on the left flank of the offensive, in the area between Lake Velence-Székesfehérvár. As the operation progressed, the division was engaged in preventing Soviet efforts at outflanking the advancing German forces. On 16 March, the Soviets forces counterattacked in overwhelming strength causing the Germans to be driven back to their starting positions. On 24 March, another Soviet attack threw the IV SS Panzer Corps back towards Vienna; all contact was lost with the neighbouring I SS Panzer Corps, and any resemblance of an organised line of defence was gone. Wiking withdrew into Czechoslovakia. The division surrendered to the American forces near Fürstenfeld, Austria on 9 May.
Following the shooting death of Hilmar Wäckerle, one of the division's officers, in the city of Lviv, Jews in the area were rounded up by members of the division's logistics units led by Obersturmführer Braunnagel and Untersturmführer Kochalty. A gauntlet was then formed by two rows of soldiers. Most of these soldiers were from the Wiking's logistics units, but some were members of the German 1st Mountain Division. The Jews were then forced to run down this path while being struck by rifle butts and bayonets. At the end of this path stood a number of SS and army officers who shot the Jews as soon as they entered a bomb crater being used as a mass grave. About 50 or 60 Jews were killed in this manner.
In addition, historian Eleonore Lappin, from the Institute for the History of Jews in Austria, has documented several cases of war crimes committed by members of Wiking in her work The Death Marches of Hungarian Jews Through Austria in the Spring of 1945.
On 28 March 1945, 80 Jews from an evacuation column, although fit for the journey, were shot by three members of Wiking and five military policemen. On 4 April, 20 members of another column that left Graz tried to escape near the town of Eggenfeld, not far from Gratkorn. Troops from the division stationed there apprehended them in the forest near Mt. Eggenfeld and then herded them into a gully, where they were shot. On 7–11 April 1945, members of the division executed another eighteen escaped prisoners.
In 2013 the NRK quoted "the first Norwegian [to publicly admit] that he participated in war crimes and extermination of Jews in Eastern Europe" during World War II, former soldier of the division, Olav Tuff, who admitted: "In one instance in Ukraine during the autumn of 1941, civilians were herded like cattle—into a church. Shortly afterwards soldiers from my unit started to pour gasoline onto the church and somewhere between 200 and 300 humans were burned inside [the church]. I was assigned as guard, and no one came out." The 2014 Norwegian book Morfar, Hitler og jeg (Grandfather, Hitler and I) quotes the diary of a division soldier from 1941 to 1943: "and then we cleaned a Jew hole".
This is in exceptionally good condition and it’s the only other one we have been able to find! This will be sent via special delivery  and dispatched within two working days.