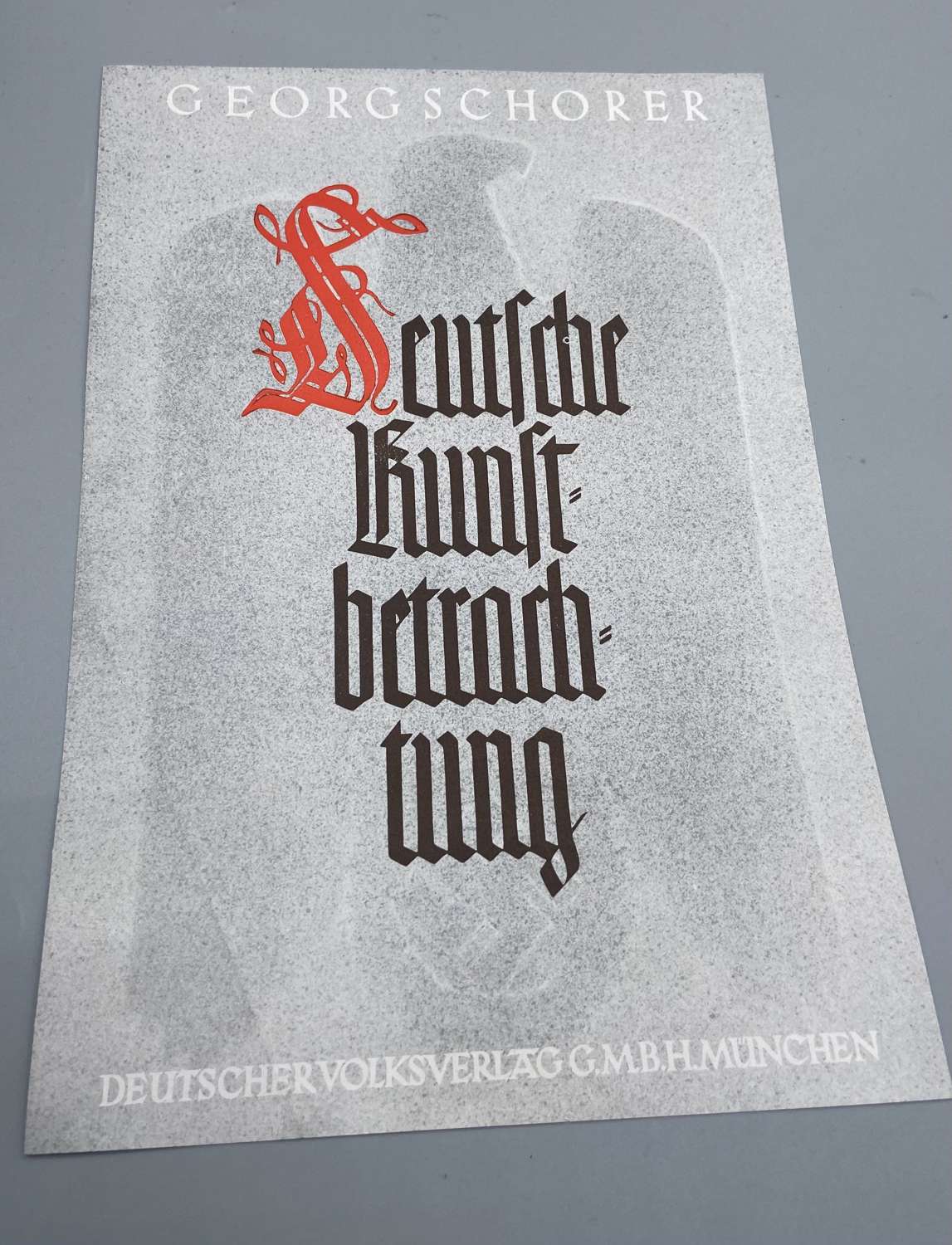 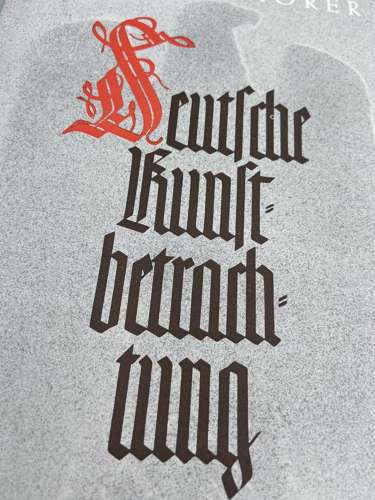 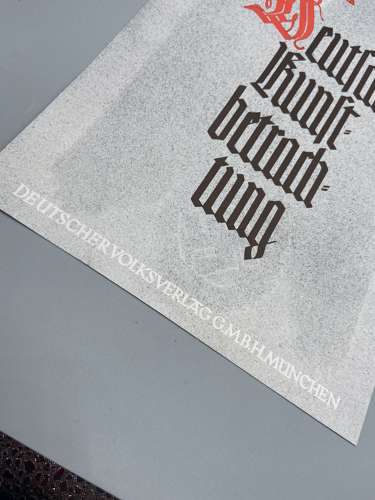 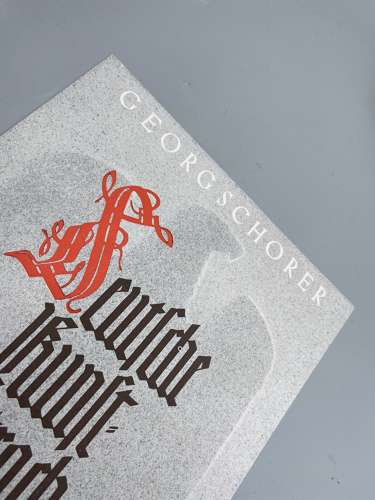 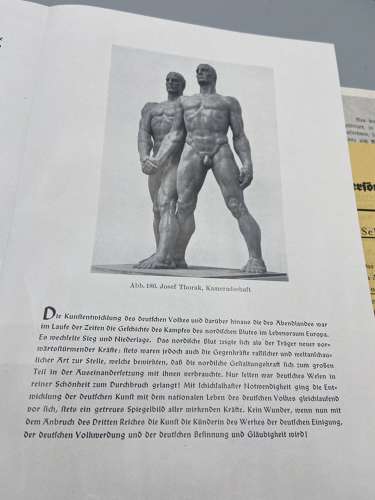 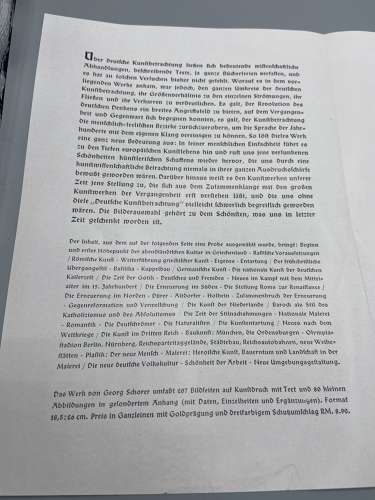 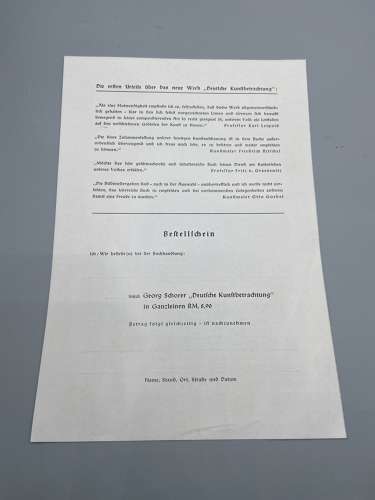 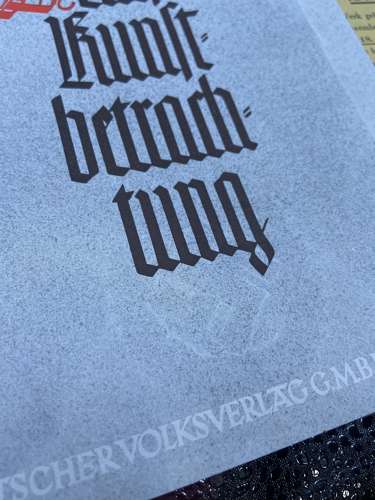 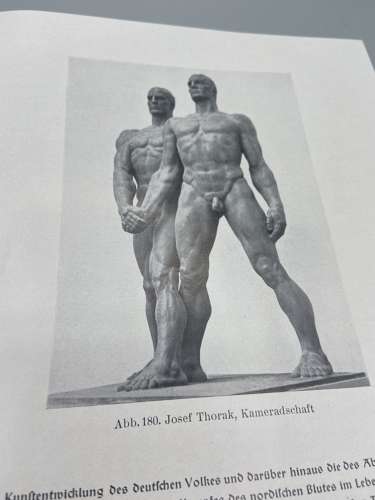 For sale is a Rare WW2 German Georg Schorer Art Viewing In Munich Leaflet. Translated to English it states:

Above my view of the art I am reading important mature papers, descriptive texts, Sante book holidays, and so far there has been no lack of such attempts. What is important in the Werle in front of it, however, is not enough to clarify the whole area of ​​the German contemplation of the future, their relationship to the individual currents, their tiling and their persistence. The aim was to offer a broad field of attack via the Revolution of German Thought, on which the past and Gegenroart Aich could meet, co salt, the kun contemplation to recapture the humanly and leelian districts in order to be able to unite the language of centuries with one's own sound . So Dielea Werl lofts a completely new meaning: In fine human simplicity it leads to the depths of European art and brings back une lene perfected beauties of artistic creations, which we were never impressed by an artistic examination in their entire expression chart. In addition, customers of the recent past have had the same position that I can understand from the juxtaposition with the great art series of the past, and which were perhaps difficult to understand without a floorboard, "Deutche Kuntblicke". which has recently been given to us. Fig. 180. Josef Thornk, camera operator The content, from which a sample can be found on the following page, brings: the beginning and first climax of occidental culture in Greece Kunſt - own. Degeneracy / The fra driftliche transition to Banika - domed building Germaniſche Kunſt - The national art of the German imperial era The time of the dorih German and foreign - New in the struggle with the middle age in the 15th century / The renewal in the Saben. The position Romo zur Renaillance / Renewal in the north - Darer - Altdorfer - Holbein - collapse The Renewal - Counter-Reformation and Softening The art of the Netherlands / Barodi ala Sell do Katholiclomue and Oce Abfolutiomuro The time of rope imitations - National painting - Romanticism - The Deutſchrömer - The Naturalites. The edge degeneration / Neuco after the World War / The Kunſt in the Third Reich Building origin: Some, the Ordeneburgen - Olympia Radion Berlin, Nuremberg, Reichsparteitas gelande, Statebau, Reicho autobahns, new consecration tatten - Partik: Der neue Menfch - Painting: Herolche Kunſt, Bauerntum and Landchaft in der Maleret / The new German folk culture. Beauty of work - new surroundings. The customer direction of the German Volhe and barober hinawo dle des Abendlandeo voar in the course of time the history deo Kampleo oro nordichen Bluteo in the Lebenorum Ewropa. Eo waggled victory and defeat. Dao norbliche blood showed lid alo the wearer new before warmen he strengths Reto bod were also the counter-air lighter and wide kind on the spot, which encouraged, from bie norbiiche development olvrat ild to the rough part in the dispute with them used up. Only felten before buildvee Weten achieved a breakthrough in a pure protective belt! With Ichichtathatter necessity the Ent went. voidilung the German art with the national life Oro German Vollveo before fich, fteto true mirror image of all available forces. No wonder, if with the dawn of the Third Reich bie kunt with Konberin Deo Werhes the clear emigration of the German full advertising and the clear coincidence and Glebiglvelt! Georg Schorer's work um'at so Bilbreiten on art print with text and such small images in a separate appendix (with dates, details and additions). Format 18.5: 86 cm. Prelo in full linen with gold embossing and three-colored envelope RM.8.20.

The first judgments about the new work "German Art Contemplation": As a necessity I feel that this work is held in a generally foreign way - clearly in the lines and borders drawn out in the fich felbf deliberately finer compelling manner to be quite suitable in, inferior A full guide to the various areas of the kunt. Protettor Karl Leipold, The mare gathering of our present day Kunſtan review is extremely convincing in the book and I am delighted to have it and to be able to recommend it. Artistic painter Friedrich Ritchel, One would like to fulfill very geſchmacolle and content-rich book fine service am Kulturleben unfereo Volkeo. Protetor Fritz v. Graevenitz ,, The picture gifts are also unsurpassable in the Auomahl and I will not fail to recommend the instructive book and any occasions that arise with it to others a pleasure to make. "Art painter Otto Goebel Beſtellich an I / We order (s) at the bookstore: piece Georg Schorer ,, German art consideration in whole linen RM. 8.90 Amount follows at the same time - ift after adding name, status, place, street and date

In great condition. You will not see another one of these, with an incredibly small number of these surviving the war. Guaranteed original or money back. This will be sent first class signed for and dispatched within two to three working day’s.