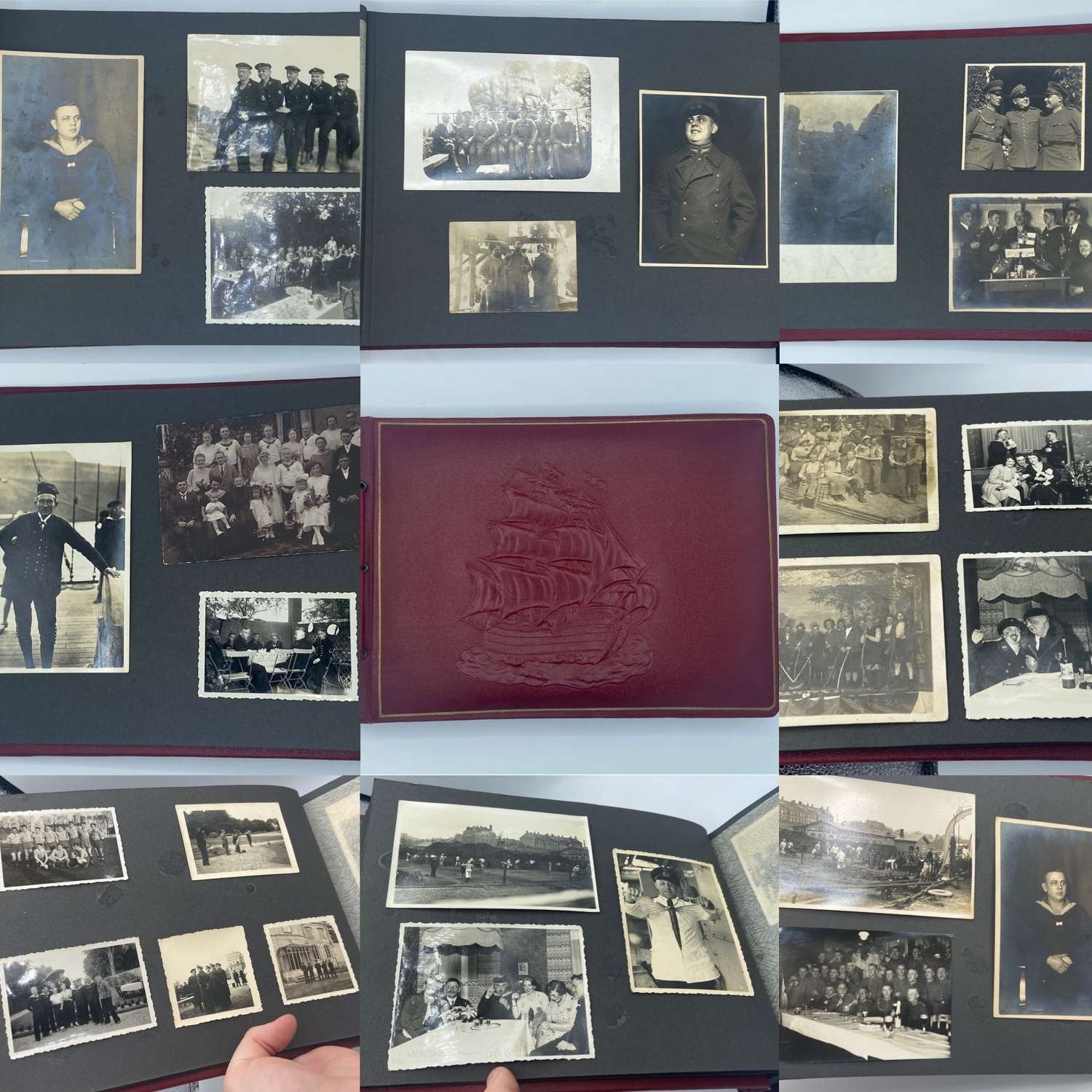 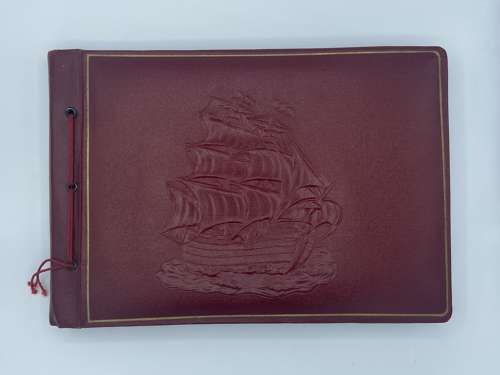 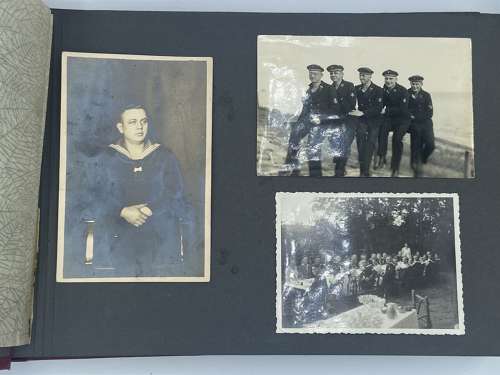 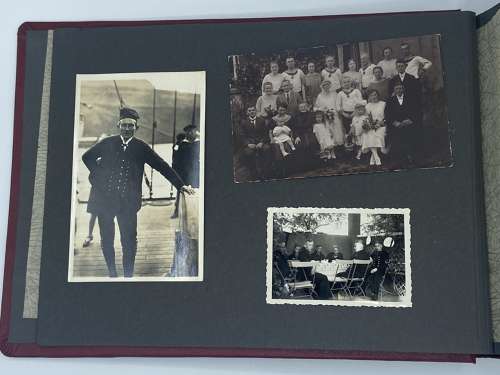 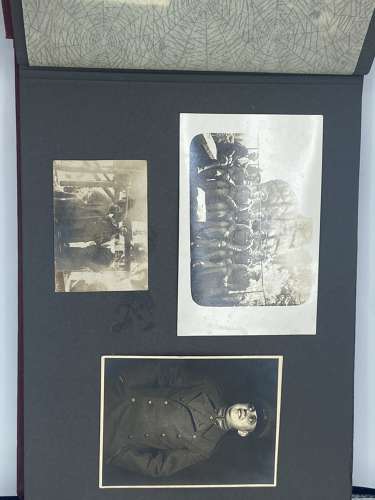 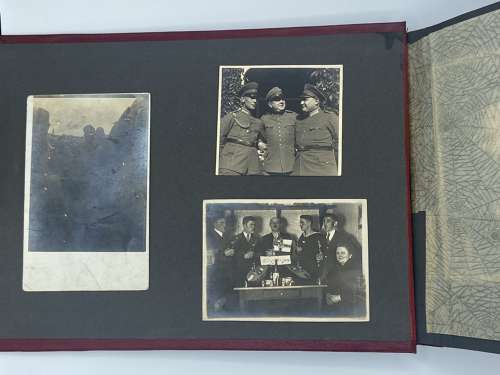 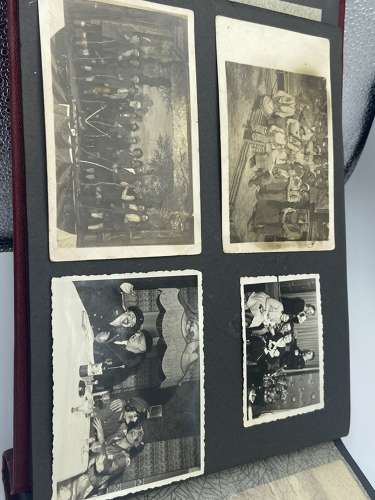 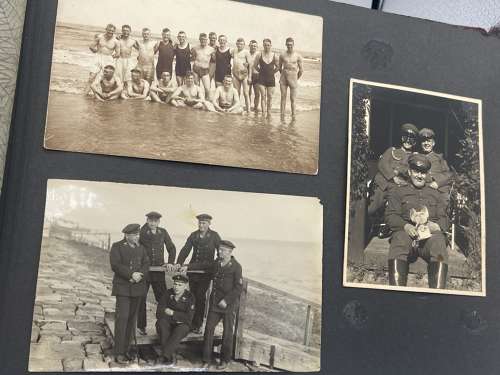 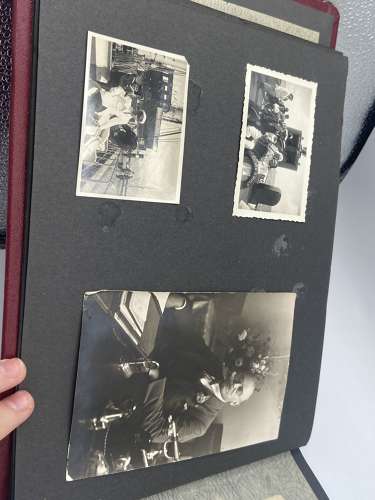 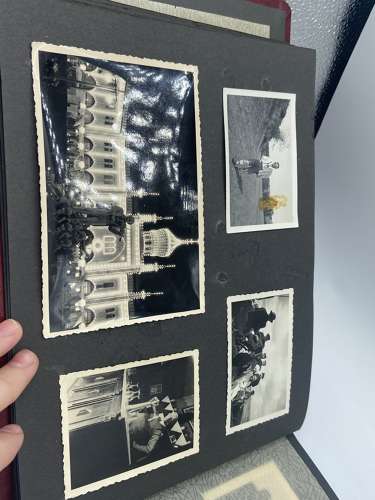 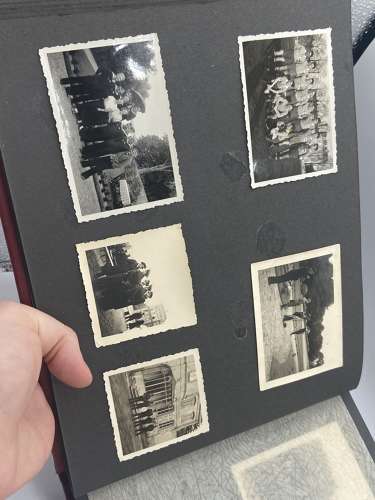 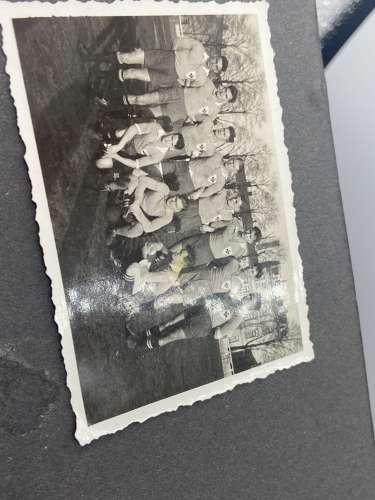 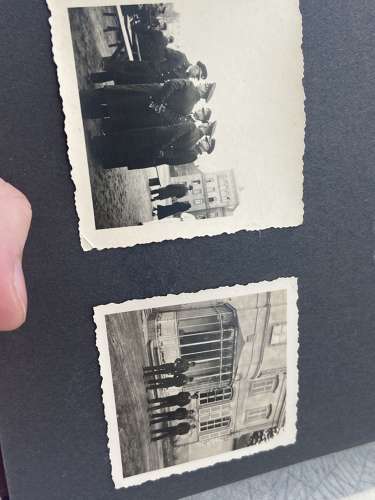 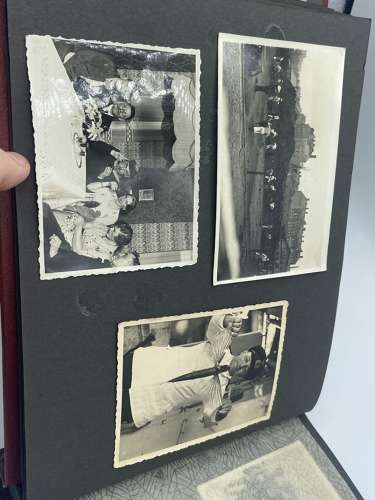 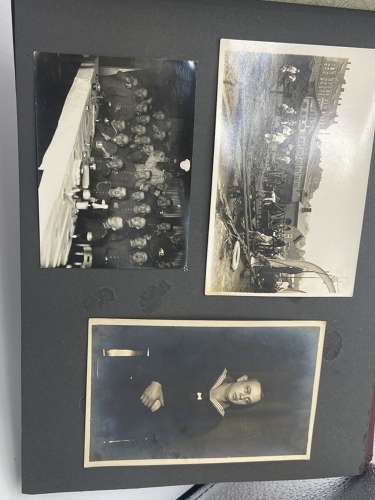 For sale is a rare set of German Naval photographs three periods of the German navy belonging to a group of men. These three periods include Covering the imperial German navy Kaiserliche (1871–1919 only the last few years of the war), 1919–35 Reichesmarine to finally the Kriegsmarine of 1935–44. Where you can see the young men develop into fine members of the armed forces. Unfortunately in 1944 a month after the battle of Normandy, 4. Torpedobootshalbflottille 4. was bombed and sunk to it watery depths. Throughout the photographs the sailors have 4. Torpedobootshalbflottille 4. On their tally’s. The ships history can be seen below. This is a great lot of photographs, containing 69, most of which are the sailors themselves. 59 of them are the sailors and 10 of them are family photos only half of the photo album is complete. (The other half’s are blank). In great condition.

4 important photographs to note are of the hand over day in 1934 to Hans-Jürgen Reinicke where the group of young sailors are seen in a group photograph with him, another photograph of Reinicke and 4 other high ranking officers, another with Reicke and press cameras and then one final one of a group of sailors standing together in the front garden of the official hand over location. Reinicke, who had been promoted to Kapitänleutnant (Captain Lieutenant) on 1 June 1934, was given command of the torpedo boat Möwe in the 4th Torpedoboat-Demi-Flotilla on 29 September. .He commanded Möwe until September 1936. During this command, the Reichsmarine was renamed the Kriegsmarine and the Demi-Flotilla was renamed to 4th Torpedoboat-Flotilla, effective as of 1 October 1935.

Before signing up for the navy in early WW1 these boys thought in the trenches,where here close bonds were made. There are some cracking photos of these men dressed up as women in the reserve trenches! Which is rare to see!

Mowe was the lead ship of her class of six torpedo boats built for the German Navy. The boat made multiple non-intervention patrols during the Spanish Civil War in the late 1930s. During the Norwegian Campaign of 1940, she played a minor in the attack on Oslo, the capital of Norway. Mowe was torpedoed and badly damaged by a British submarine in May and did not return to active service until 1942 when she was transferred to France. The boat helped to escort blockade runners, commerce raiders and submarines through the Bay of Biscay. She also laid numerous minefields and attacked Allied ships during the Invasion of Normandy in June 1944. Mowe was sunk by British bombers that same month.

The Type 23 torpedo boat (also known as the Raubvogel (bird of prey) or the Möwe class) was a group of six torpedo boats built for the Reichsmarine during the 1920s. As part of the renamed Kriegsmarine, the boats made multiple non-intervention patrols during the Spanish Civil War in the late 1930s. During World War II, they played a minor role in the Norwegian Campaign of 1940, Albatros being lost when she ran aground. The Type 23s spent the next several months escorting minelayers as they laid minefields and escorting ships before the ships were transferred to France around September. Möwe was torpedoed during this time and did not return to service until 1942. They started laying minefields themselves in September and continued to do so for the rest of the war.

After refits in early 1941, the boats were transferred to the Skaggerak where they were assigned escort duties. Most of the surviving ships returned to France in 1942 and helped to escort the capital ships sailing from France to Germany through the English Channel in the Channel Dash. They helped to escort blockade runners, commerce raiders and submarines through the English Channel and the Bay of Biscay throughout 1942 and 1943. Seeadler was sunk escorting a commerce raider in early 1942. Greif, however, was refitting through all of 1942 and was then assigned to escort duty in Norwegian waters before joining her sister ships in France in mid-1943.

In 1944, the Type 23s were mostly occupied with laying mines. Greif was sunk by British aircraft and Kondor was badly damaged by a mine in May. The two surviving operational boats, Falke and Möwe, attacked Allied ships during the Invasion of Normandy in June with little success and they were sunk by British bombers later that month. Kondor, the last survivor, was wrecked by bombers at the end of July.

Möwe was the lead ship of the her class of six torpedo boats built for the German Navy (initially called the Reichsmarine and then renamed as the Kriegsmarine in 1935). The boat made multiple non-intervention patrols during the Spanish Civil War in the late 1930s. During the Norwegian Campaign of 1940, she played a minor in the attack on Oslo, the capital of Norway. Möwe was torpedoed and badly damaged by a British submarine in May and did not return to active service until 1942 when she was transferred to France. The boat helped to escort blockade runners, commerce raiders and submarines through the Bay of Biscay. She also laid numerous minefields and attacked Allied ships during the Invasion of Normandy in June 1944. Möwe was sunk by British bombers that same month.

As built, the Type 23s mounted three 10.5 cm (4.1 in) SK L/45 guns, one forward and two aft of the superstructure, numbered one through three from bow to stern. They carried six above-water 50 cm (19.6 in) torpedo tubes in two triple mounts and could also carry up to 30 mines. After 1931, the torpedo tubes were replaced by 533-millimeter (21.0 in) tubes and a pair of 2-centimeter (0.8 in) C/30 anti-aircraft guns were added. During the war a quadruple 2 cm was added just forward of No. 2 gun, three 2 cm guns were positioned around the aft funnel and another pair were mounted on the bridge wings, all in single mounts. Around 1944 a FuMB 4 Sumatra radar detector was installed as was radar.

Möwe supported the North Sea mining operations that began on 3 September 1939. During the Nowegian Campaign, the boat was assigned to Group 5 under Konteradmiral Oskar Kummetz on the heavy cruiser Blücher, tasked to capture Oslo on 9 April. Möwe transported 114 men of the invasion force and was one of the cruiser's escorts through the Kattegat and into Oslofjord. During the Battle of Drøbak Sound, the boat was in the rear of the German formation as it advanced up the fjord. After the Norwegian coast defenses crippled Blücher as she attempted to pass Oscarsborg Fortress, she was ordered to unload her troops at Son. Around 17:30 Möwe and her sister Kondor supported the occupation of Kopås and Husvik batteries near Drøbak. A little over an hour later, Möwe approached the main fort under a flag of truce, and her commander, Kapitänleutnant (Lieutenant) Helmut Neuss, demanded that it surrender; the fort's commander, Oberst (Colonel) Birger Eriksen, dragged out the negotiations until a more senior officer was sent. The next day, the torpedo boat escorted the heavy cruiser Lützow through the Oslofjord until word was received that her sister Albatros had run aground and been wrecked. Möwe was ordered to replace Albatros in the outer reaches of the Oslofjord. Lützow continued on to Germany without any escort and was torpedoed by a British submarine later that night off the Danish coast. Möwe and Kondor, among other ships, arrived the following morning to render assistance.

On 18 April, Möwe and her sisters Greif and Seeadler escorted minelayers as they laid anti-submarine minefields in the Kattegat. Escorted by two destroyers, Möwe, Kondor and the torpedo boat Wolf, minelayers laid another minefield in the Skaggerak on 29–30 April. En route, the torpedo boat Leopard was sunk when she was accidentally rammed by the minelayer Preussen. The following month, she was torpedoed by the British submarine HMS Taku on 8 May. The torpedo blew her stern off and she was under repair until October. Her stern was rebuilt in the same transom style used by her sisters. Möwe was not fully operational until early 1942 and was transferred to France in May of that year. In September–October, Möwe was one of the escorts for German blockade runners sailing from ports in the Bay of Biscay en route to Japan. On 3–7 May 1943, Möwe and Greif escorted minelayers in the North Sea as they laid new minefields. From 4 to 6 June, Möwe, Greif, Kondor, her sister Falke and the torpedo boat T22 laid two minefields in the English Channel. Later that month the ships return to the Bay of Biscay to help escort U-boats through the Bay and continue to do so into early August. Möwe and Kondor helped to lay two minefields in the English Channel on 3–5 September.

The 4th and 5th Torpedo Boat Flotillas, consisting Möwe, Greif, Kondor, and the torpedo boats Jaguar, T27, and T29 laid minefields off Le Havre and Fécamp, France, on 21 and 22 March. On 17–19 April, the 5th Torpedo Boat Flotilla, including Möwe, Greif and Kondor sailed from Brest, France, to Cherbourg as distant cover for a convoy. A few days later, the flotilla laid a minefield on the night of 21/22 April. The following night the torpedo boats engaged British motor torpedo boats near Cape Barfleur and sank one of them. On the nights of 26/27 and 27/28 April, they laid 108 mines each night near Cherbourg. On 30 April and 1 May, the flotilla laid 260 mines in three minefields. Three weeks later, the flotilla was ordered to transfer from Cherbourg to Le Havre and departed on the night of 23/24 May. Möwe, Greif, Falke, Kondor and Jaguar were attacked by Allied aircraft early the next day and Greif was struck by two bombs that set her forward boiler room on fire and caused her to take on water forward. With both boiler rooms subsequently flooded, she was unmaneuverable and accidentally collided with Falke. The latter was only slightly damaged, but Greif's bow was badly bent which caused problems for Möwe when she began to tow her sister. Around 06:00 Greif lost all power and sank at 06:32. At 07:43 Kondor struck a mine and had to be towed by Möwe for the remainder of the voyage.

As the Allies began landing in Normandy on 6 June, the 5th Flotilla, now consisting of Möwe, Falke, Jaguar and the newly refitted large torpedo boat T28, sortied multiple times from Le Havre over the next week in attempts to sink Allied shipping. Despite the expenditure of over 50 torpedoes and large quantities of ammunition, they were generally unsuccessful, only sinking the destroyer HNoMS Svenner on 6 June. During an air raid by the Royal Air Force on the night of 14/15 June, bombs sank Falke and Jaguar and badly damaged Möwe. She finally sank on 16 June after some weapons and equipment had been salvaged.

Guaranteed original or money back guaranteed. This will be sent via special delivery and dispatched within two to three working day’s.