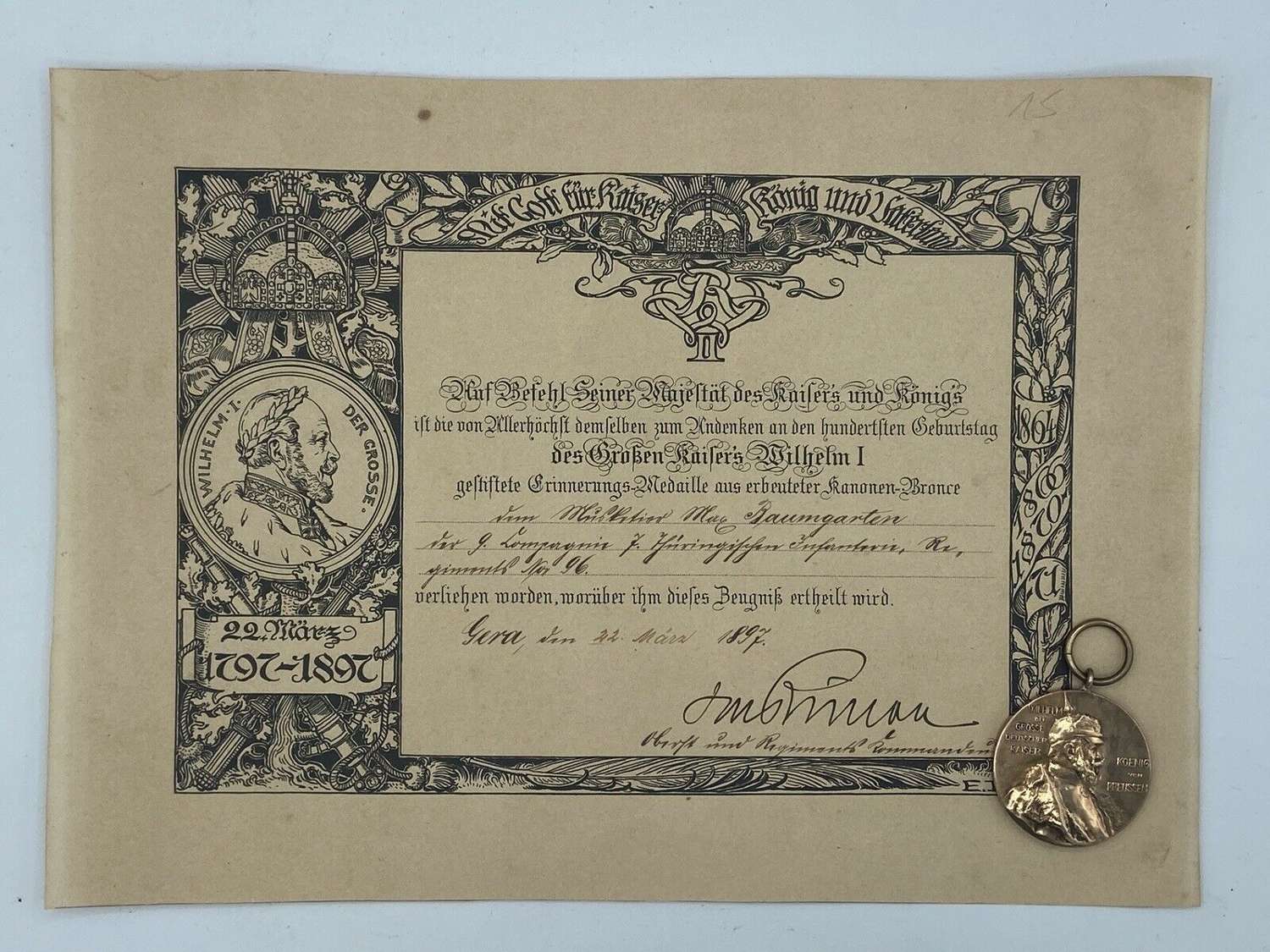 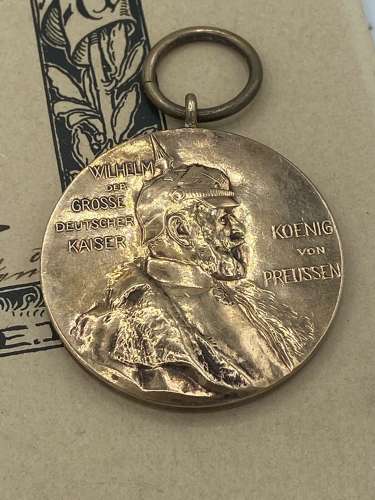 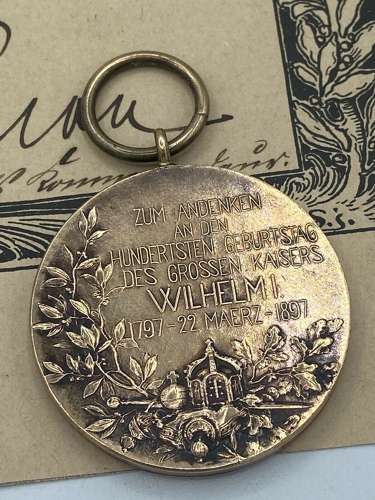 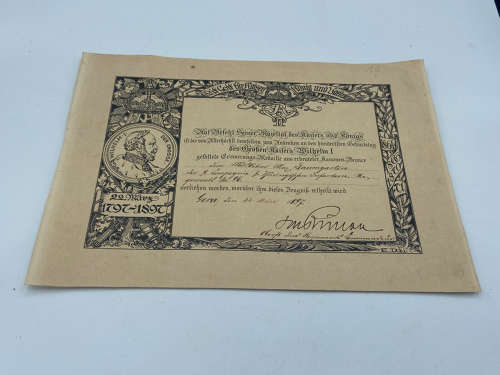 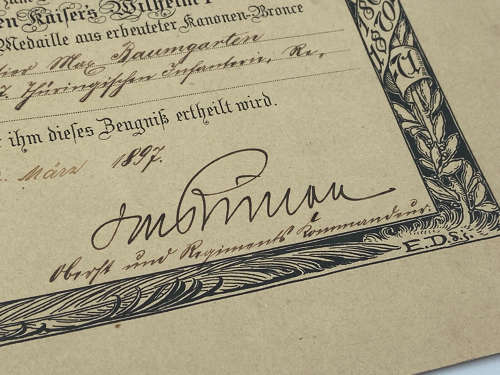 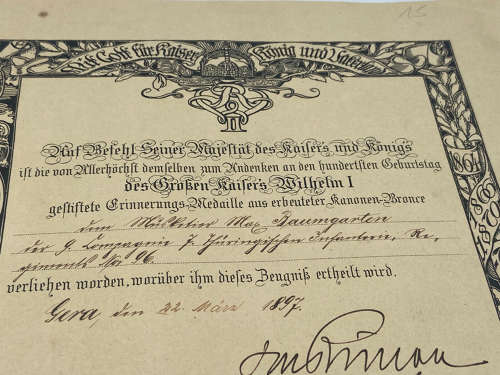 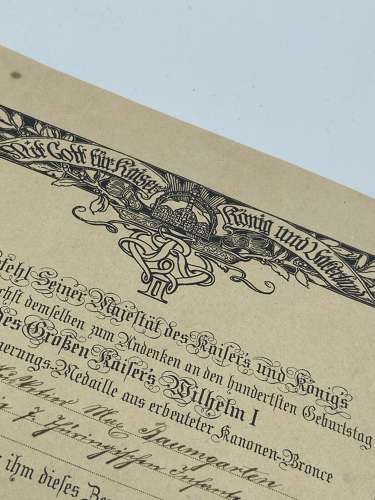 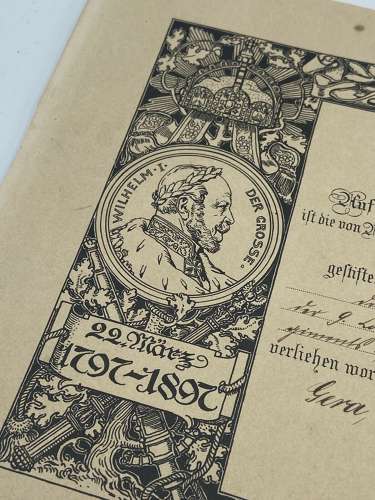 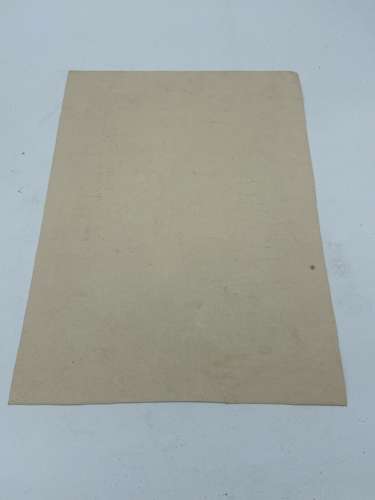 £60.00 Approx $82.53, €70.26, £60
(1 in stock)
Qty
For sale is a Zentenarmedaille, a.k.a. Centenarmedaille Wilhelm I Centenary Medal, Wilhelm I Centenary Medal was a mass produced decoration and had been issued to more than 1 million recipients. This being said the certificate was issued on the 1st day of these medals being issued on the 22nd March 1897, in which on the certificate this is also the case (which is very rare to see) in which these were only issued at wilhelm I 100th birthday celebrations in Berlin, this certificate is signed by the commander. The numbers of these medals given out on this day at this event are unknown but would be in the very limited few. This is a VERY RARE DATE TO HAVE!
Celebration on the occasion of the 100th birthday of Emperor Wilhelm I. Highlights of the three-day celebrations was the unveiling of a monument to Emperor Wilhelm I by Emperor Wilhelm II in front of the Berlin Palace and the pageant of the citizens, in which 24,000 people participated.
The medal was instituted by a Royal order of Wilhelm II on March 22, 1897 as “Medaille zur Erinnerung an des Hochseligen Kaisers und Königs Wilhelm I, des Großen, Majestät” to honor the 100th birthday of his late grandfather Wilhelm I (22.03.1797–09.03.1888), the first German emperor. This award is also known as “Kaiser Wilhelm Erinnerungsmünze 1897” and “Kaiser Wilhelm I Erinnerungsmedaille 1897”.
The following categories were eligible for decoration:
- All Prussian veterans being still alive of all the unification wars the kingdom fought in the XIX century, i.e. 1813-1815 (Wars of Liberation, or Befreiungskriege), 1848-1849 (The First Schleswig War), 1864 (The Second Schleswig War), 1866 (Austro-Prussian War) and 1870-1871 (Franco-Prussian War).
- All German veterans of the Franco-Prussian War regardless of their citizenship.
- All officers, NCOs and other ranks of the Prussian army, Imperial Navy (Kaiserliche Marine) and Colonial forces (Schutztruppe) on active duty by the date of institution of award.
- Certain non-Prussian military personnel from armies of other German states chosen according to several criteria, e.g. regiments that the German emperor had a honorary military rank of, regiments that served alongside Prussian units in Alsace-Lorraine, etc.
The medal and certificate are in good condition, Guaranteed original or money back guaranteed. This will be sent special delivery and dispatched within two to three working day’s.