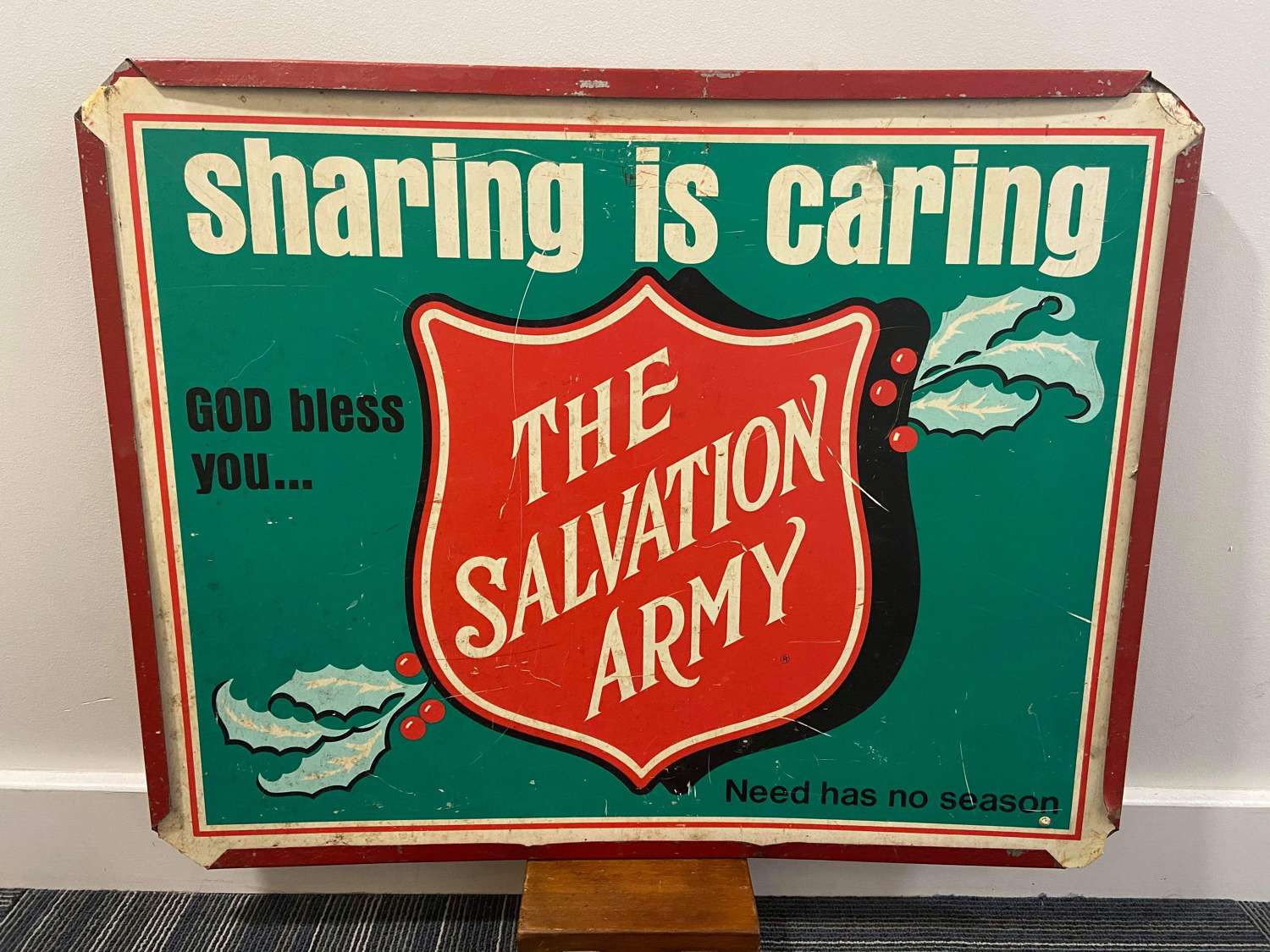 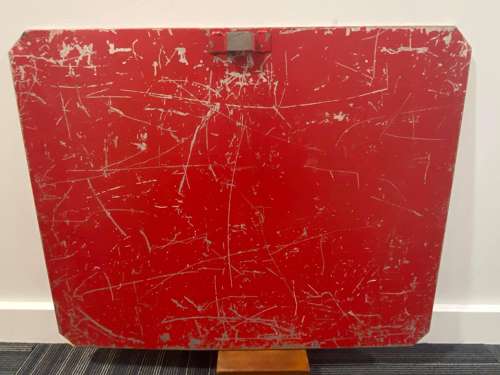 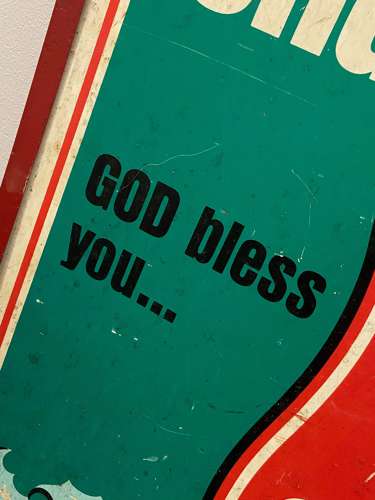 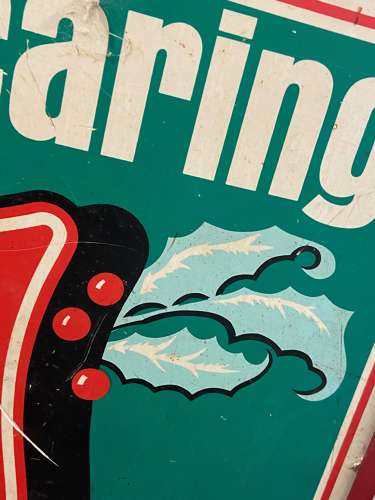 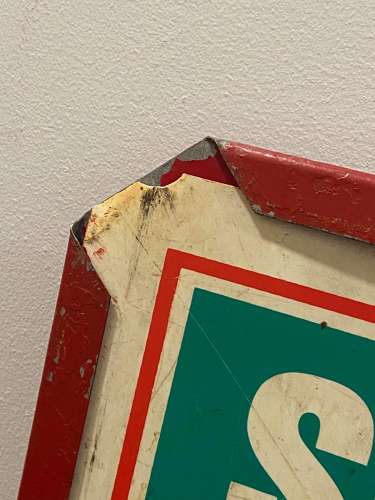 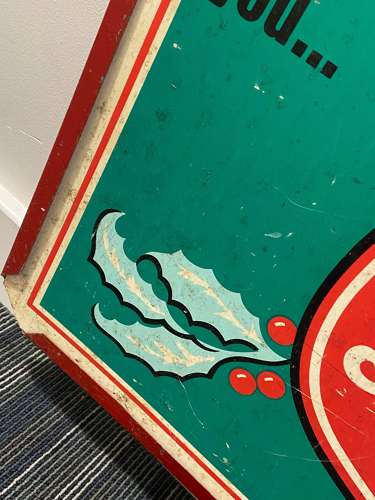 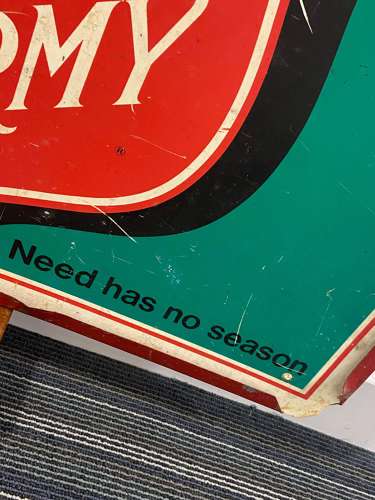 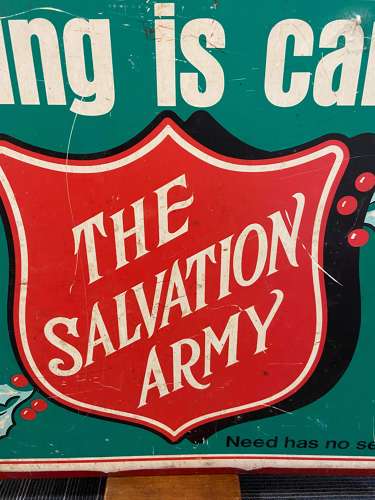 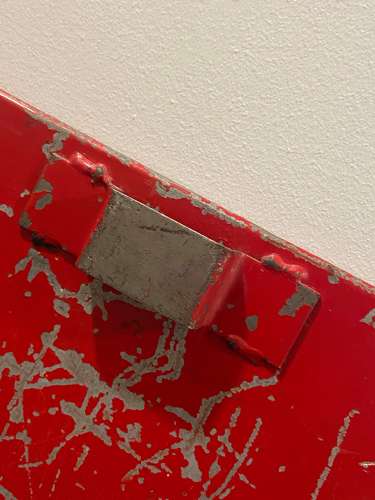 For sale is a wW2 era Vintage United States ‘Sharing Is Caring’ The Salvation Army Large steel Sign. The sign states: “Sharing is caring, the Salvation Army, God bless you…, Need has no season.” The sign measures: 72cm length x height 57cm x width 3cm. In relatively good condition, however paint on the steel holder has many scratches/ signs of wear, however the poster inside is in good condition. Original this would have come with a stand and kettle pot, these two parts are no longer present. This is a great interior design piece and they rarely come up for sale in the United Kingdom.

Although perhaps best known for its social ministries and quasi-military style of organization, The Salvation Army is an international movement of evangelical Christians whose message is biblically-based and whose ministry is motivated by the love of God. Its self-described mission is to “preach the gospel of Jesus Christ and to meet human need in His name without discrimination.”

The movement is inseparably bound to the personality of William Booth, who was born in Nottingham, England, in 1829. Apprenticed to a pawnbroker when he was 13 years old, Booth quickly learned to despise his new job, but also saw firsthand the crippling effects of poverty upon the British population. He became a Christian while yet a teenager and soon made his first attempts in evangelism.

Following his apprenticeship, Booth moved to London, where again he worked as a pawnbroker and witnessed the crushing burden of the urban poor. He was greatly influenced by Methodists during these years, and, after his marriage to Catherine Mumford in 1855, became an itinerant Methodist minister. Later, he felt as though God was calling him to a greater service of ordinary people, and so he resigned his appointment as a Methodist minister and moved back to London with his family.

In the summer of 1865, Booth was asked to lead a preaching mission in the East End of London. Beneath a tent situated in an old Quaker cemetery in Whitechapel, he preached of God’s love for all people, including the poor and disenfranchised. Shortly thereafter, he formed a movement that he called “The Christian Mission.”

Booth’s new organization was one of an estimated 500 charitable and religious groups preaching and ministering in the East End of London during the mid-19th century. Most met with limited success. Prospects improved, however, when Booth changed the name of his movement to “The Salvation Army” in 1878 and began promoting the concept of an army of God fighting the enemy of sin.

As more and more people responded to Booth’s ardent preaching and the invitation to become a soldier in God’s army, the movement grew rapidly. By the time of Booth’s death in 1912, his Army had spread to 58 countries of the world.

Today, The Salvation Army ministers in 175 languages and in 109 countries through 15,456 corps, outposts, societies and churches. It operates 273 goodwill centers and 1,396 thrift stores and charity shops. Worldwide it maintains a host of social programs including residential and day care ministries, services to the armed forces, emergency response teams, as well as health and education programs.

One of the Army’s most recognizable symbols is the Christmas Kettle, (which is always seen with the sharing is caring sign) which has been used for over 100 years as a way of collecting money to serve the poor. The practice dates to the efforts of Joseph McFee to raise funds for a soup kitchen and homeless shelter in San Francisco during the final decade of the 19th century. McFee collected donations in a large cooking pot with a sign that read: “Keep the pot boiling.” By 1900, the idea had spread across the United States and has been used ever since as a primary means of holiday fund raising.

By means of the Christmas Kettle and other donations, The Salvation Army ministers to more than 7 million Americans at Thanksgiving and Christmas each year.

Other symbols employed by the Army include its “Blood and Fire” crest and its familiar red shield. Members, also called “Salvationists,” typically dress in military style uniforms and are organized by ranks in a command structure similar to that of a military organization. Leadership is vested in commissioned officers who are also Christian ministers. In keeping with a longstanding policy of non-discrimination, the Army affords men and women equal opportunities both in rank and service.

The Salvation Army draws from the mainstream of Christian theology with a balanced emphasis upon evangelism and social ministry. Its stated objectives are “the advancement of the Christian religion … of education, the relief of poverty, and other charitable objects beneficial to society or the community of mankind as a whole.”

A common theme summarizes what all Salvationists believe to be the essence of their Christian faith: “Sharing is Caring.”

This will be sent via parcel force express 48 and dispatched within two to three working day’s.