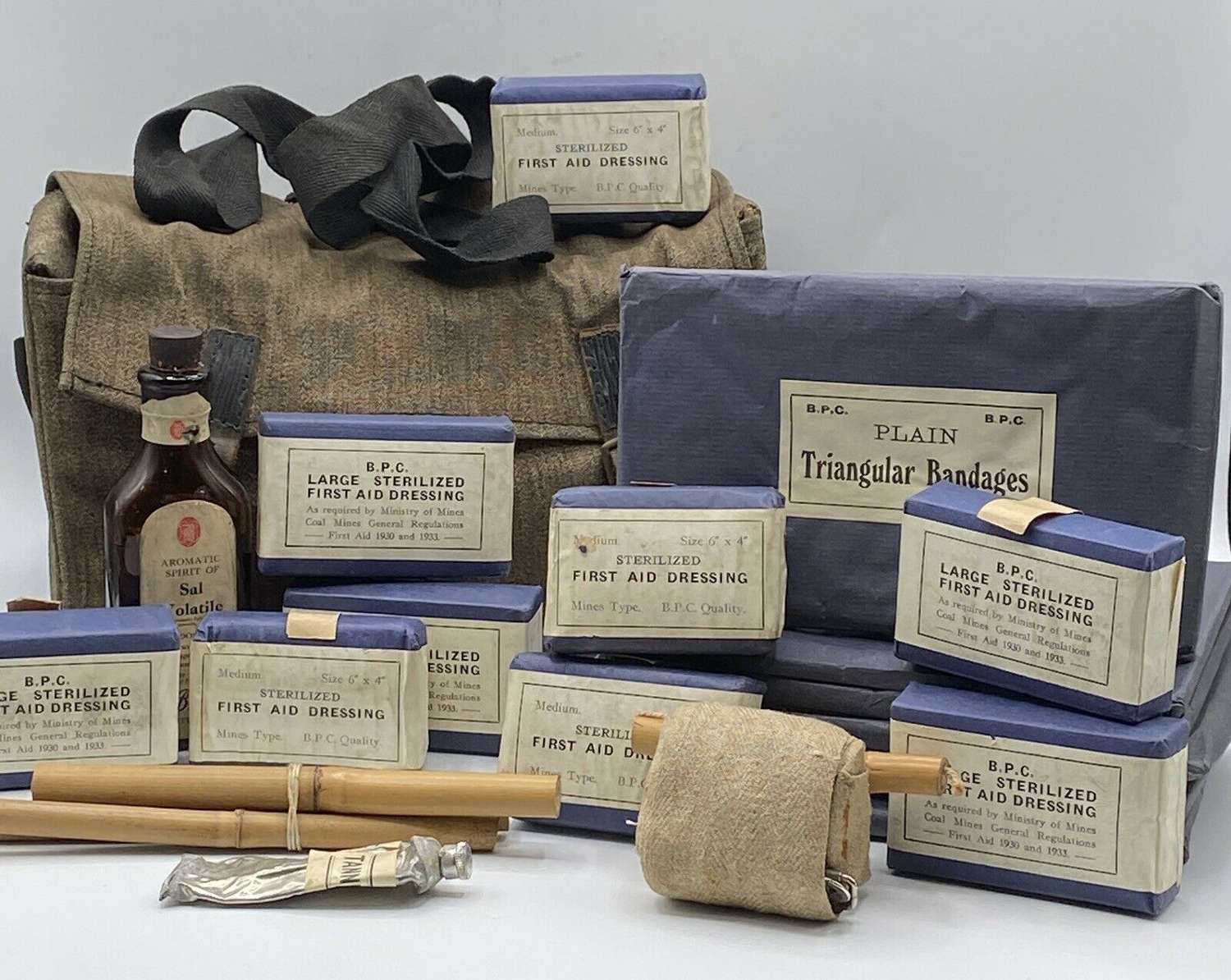 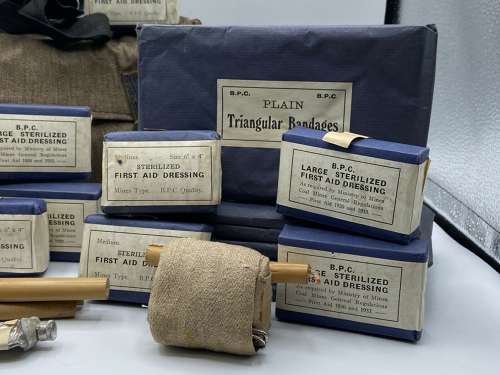 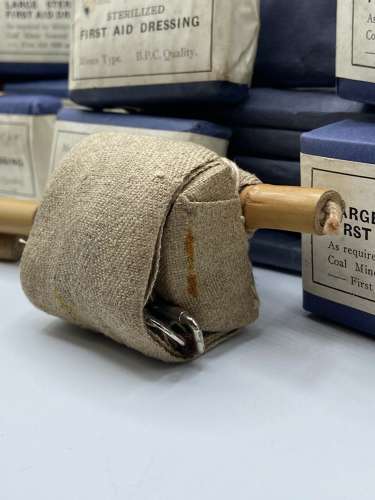 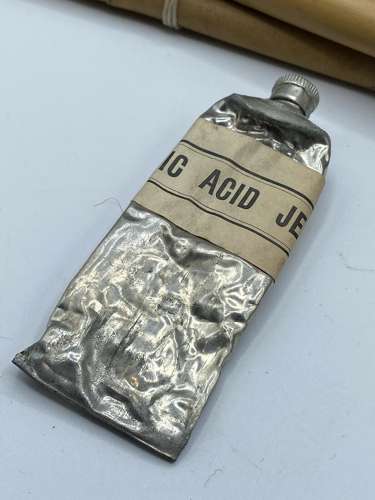 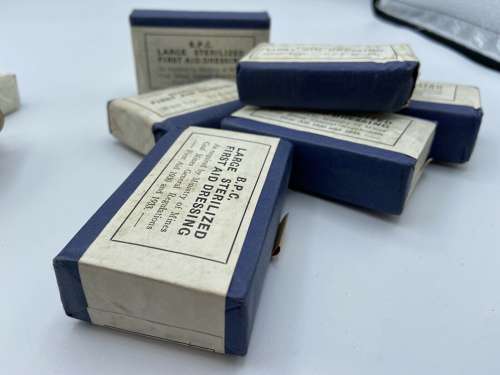 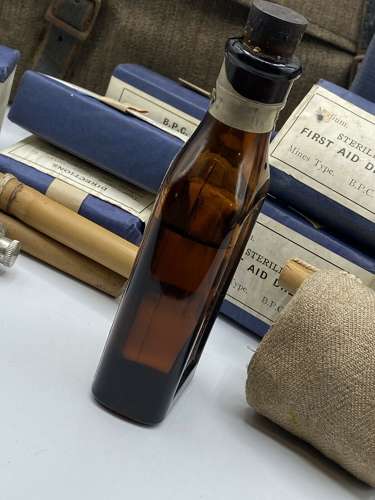 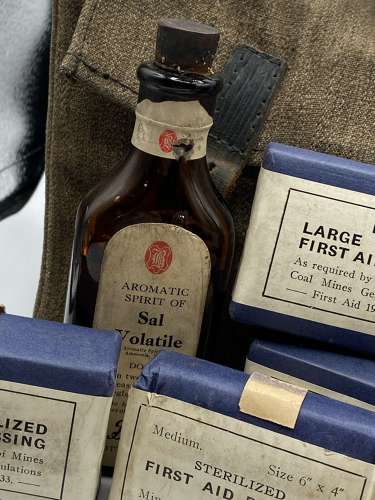 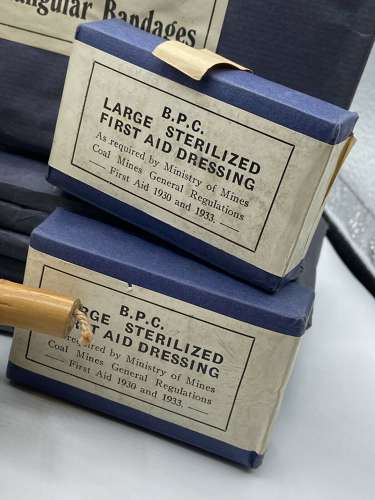 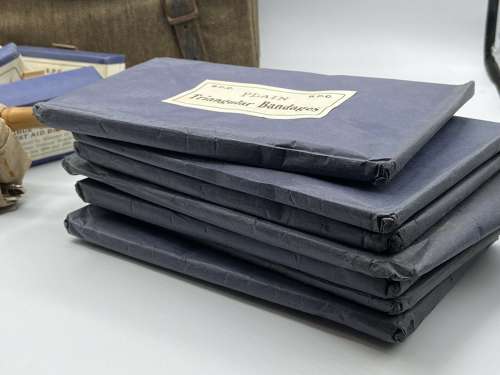 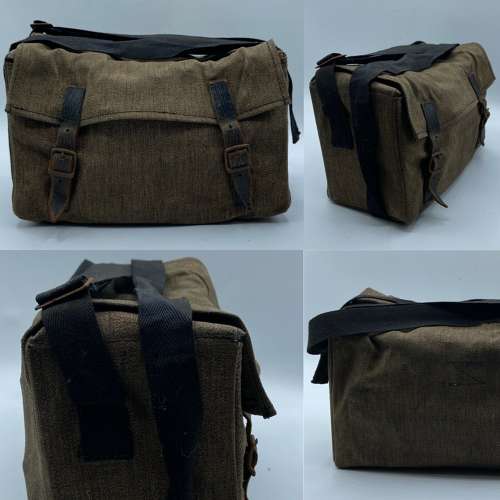 SOLD
For sale is a complete WW2 era 1930s To 1940s Ministry Of Mines First Aid Kit Complete and in mint condition, this is a very rare kit to be found this complete and in this good of condition, the only other one I’ve been able to find is in the National mining museum Scotland and the kit they have is only half content and missing the bag. This is a rare opportunity to own an incredibly rare piece of mining history. Most of these , the ones that weren’t used in the mines before the war, were certainly used in WW2 by the Bevin Boys.
Coal was central to the war effort. It not only kept people warm but powered industry, railways and shipping. After the loss of French and Belgian coalfields to the Allied war effort, Welsh coal was all the more important. This meant that the war saw some form of prosperity return to the south Wales coalfield after the long, hard inter-war years. Labour shortages 25,000 Welsh workers left mining for the armed forces and other jobs between 1938 and 1941. The coal industry moved from having tens of thousands of unwanted men to a serious labour shortage. To combat the problem mining was made a reserved occupation, exempting its employees from military service, whether they liked it or not. The government then took over control of the coal industry from its owners in 1942. The effect was quickly felt as Welsh miners were moved to coalfields such as Kent and the Forest of Dean where labour shortages were more acute.
Bevin Boys were young British men conscripted to work in the coal mines of the United Kingdom, between December 1943 and March 1948, in order to increase the rate of coal production, which had declined through the early years of World War II. The programme was named after Ernest Bevin, a former trade union official and then British Labour Party politician who was Minister of Labour and National Service in the wartime coalition government.
Chosen by lot as ten percent of all male conscripts aged 18–25, plus some volunteering as an alternative to military conscription, nearly 48,000 Bevin Boys performed vital and dangerous civil conscription service in coal mines. Although the last ballot took place in May 1945 (shortly before VE Day), the final conscripts were not released from service until March 1948. Few chose to remain working in the country's coal mining industry after demobilisation; most left for further education or for employment in other sectors.
During their time at the mines, Bevin Boys were targets of abuse from the general public, who mistakenly believed them to be draft dodgers or cowards and they were frequently stopped by the police as possible deserters. Unlike those who had served in the military, Bevin Boys were not awarded medals for their contribution to the war effort and official recognition by the British government was only conferred in 1995.
This is a great piece of history, this will be sent via special delivery and dispatched within two to three working day’s.