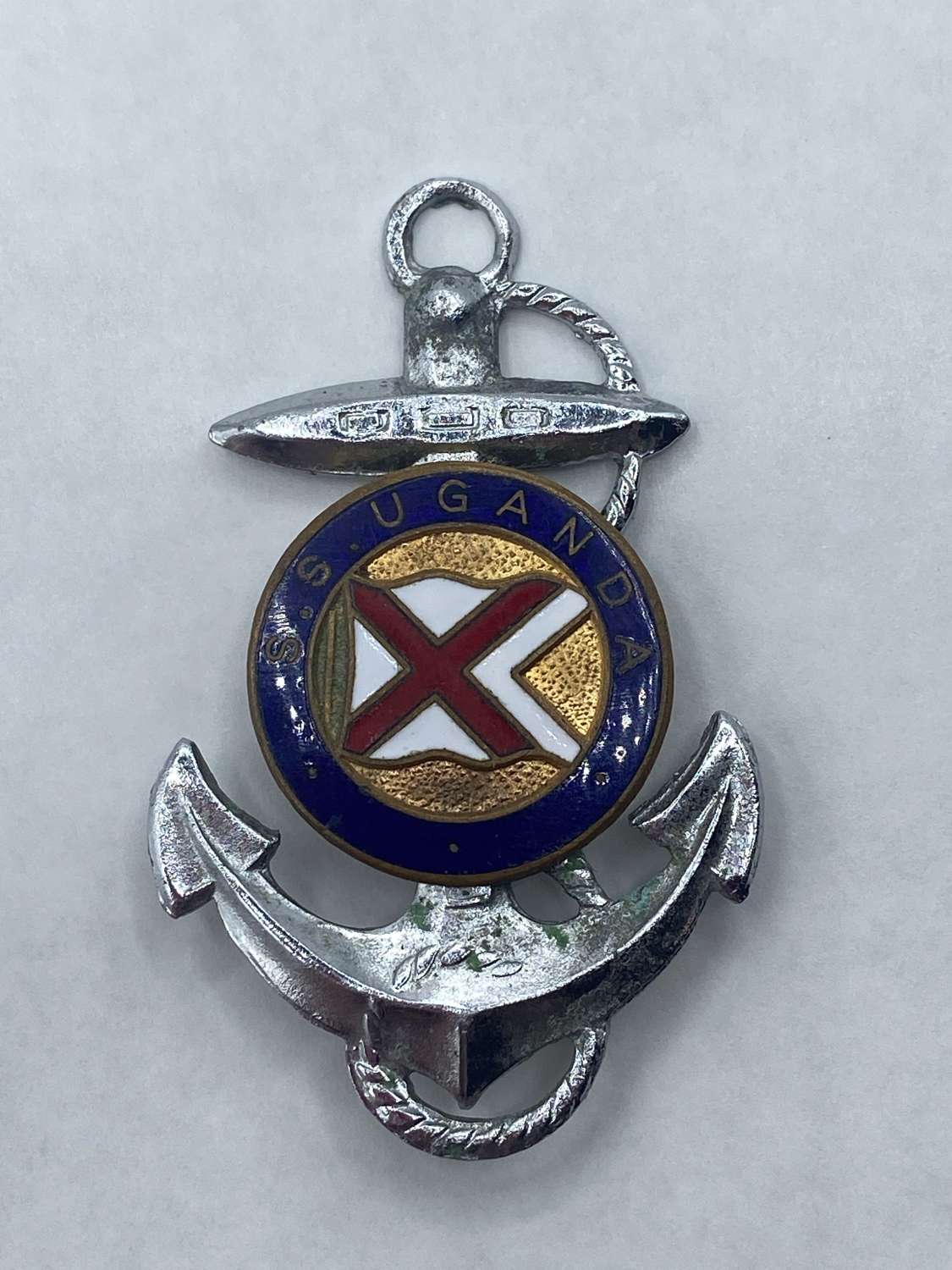 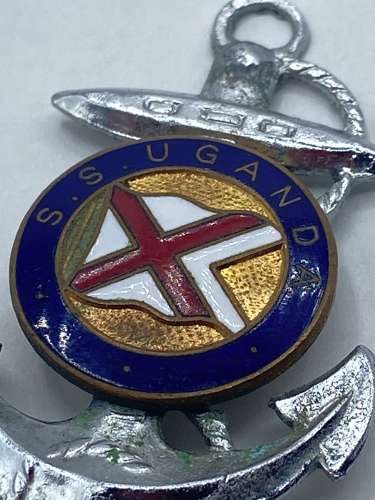 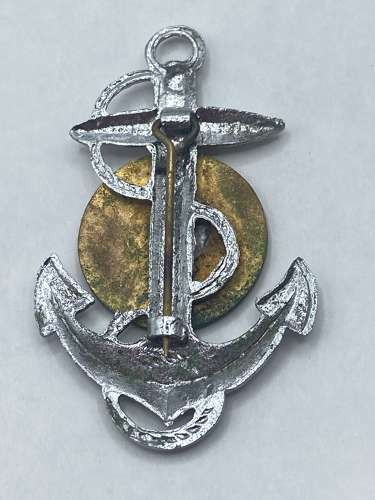 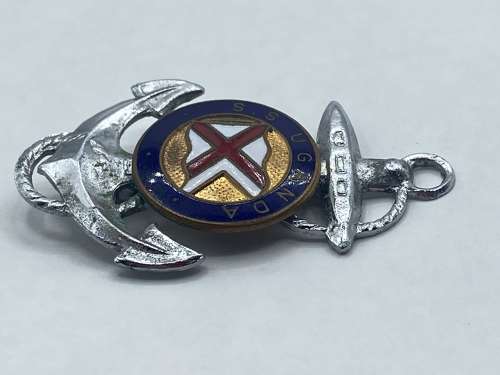 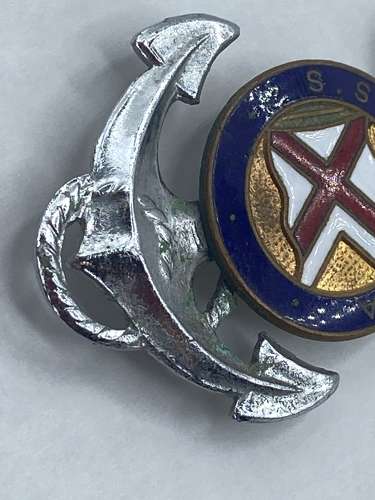 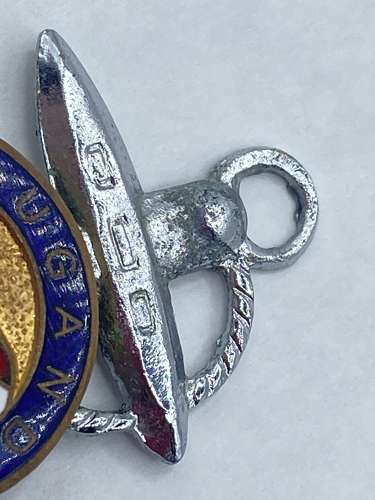 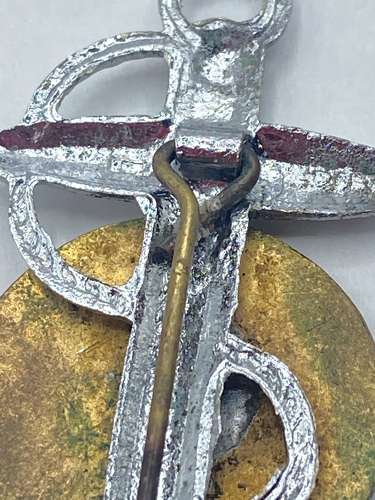 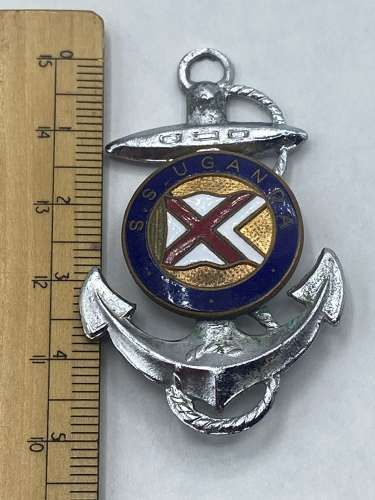 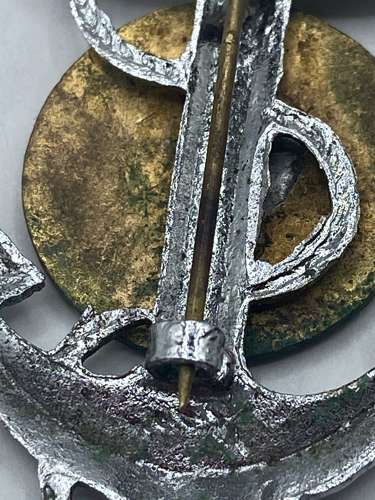 £25.00 Approx $30.67, €29.45, £25
(1 in stock)
Qty
For sale is a Post WW2 Falklands War S.S. 'Uganda' Enamel & Chrome Anchor Navy Badge. SS Uganda was a passenger liner, then cruise ship, hospital ship and troop ship between 1952 and 1986.She served with distinction in the Falklands and was painted with Red Crosses.She treated both British and Argentine casualties and had helicopter platforms built on her decks to accomodate Sea King helicopters.
About SS Uganda & Falklands War:
In 1982 Uganda was a hospital ship in the Falklands War with the call sign of "Mother Hen". She was called up for military duty while on cruise 276 and discharged her 315 cabin passengers and 940 school children, who were on an educational cruise, in Naples. When Uganda docked in Naples, reporters turned up their microphones to hear a ship full of school children singing Rule, Britannia!
Uganda had a three-day refit in Gibraltar where a helicopter platform, fittings for replenishment at sea, satellite communications and wards and operating theatres were installed. Two additional water distillers were fitted on the sports deck. In accordance with the Geneva Convention she was painted white and eight red crosses were painted, two on each side of the hull, one facing forward on the bridge superstructure, one on the upper deck visible from the air, and one on either side of her funnel. A team of 136 medical staff including 12 doctors, operating theatre staff and 40 members of the Queen Alexandra's Royal Naval Nursing Service, left Portsmouth to join her taking large quantities of medical supplies with them.
The survey vessels HMS Hecla, Hydra and Herald were converted to ambulance ships to work with Uganda. She received her first casualties on 12 May: wounded men from the Type 42 destroyer HMS Sheffield. Uganda sailed to and fro between "Red Cross Box 2" – at position 50°50′S 58°40′W and Middle Bay, taking on casualties, both British and Argentine, transferring those who were well enough to the converted survey ships for passage to Montevideo. On 28 May the land battles started and Uganda anchored in Grantham Sound, 11 miles northwest of Goose Green, where casualties from both sides arrived by helicopter and were treated. By 31 May she had 132 casualties aboard.
Uganda co-ordinated the movements of the three British and three Argentine ambulance ships Almirante Irízar, Bahía Paraíso and Puerto Deseado. She conducted 504 surgical operations, treated 730 casualties including 150 Argentinians, and made four rendezvous with the Argentine ships. In deference to the TV series M*A*S*H she was nicknamed NOSH - Naval Ocean-going Surgical Hospital.
By 10 July her role as a hospital ship was over and the crew held a party for 92 Falkland children more in keeping with her peacetime role. On 13 July Uganda was deregistered as a hospital ship and the red crosses were painted out. Two days later she went back to Grantham Sound, to embark the men of the 7th Duke of Edinburgh's Own Gurkha Rifles and their equipment, before sailing for the UK on 18 July. She arrived at Southampton on 9 August 1982, 113 days after she had sailed to join the Task Force. In this time she had sailed 26,150 miles, consumed 4,700 tons of fuel, received more than 1,000 helicopter landings on her flight deck and 3,111 personnel had been transferred to or from her.
Smiths Shiprepairers of North Shields extensively refitted Uganda, but her games deck windows never did close properly again after having Sea King helicopters landing on her quoits court. She returned to educational cruising on 25 September 1982, but in November she was chartered for two years to serve as a store ship between Ascension Island and the Falkland Islands. She was fitted with a new helicopter deck and on 14 January 1983 left Southampton for the Falklands again.
Uganda was refitted again at Falmouth in November 1983. She completed her charter in 1985, reached Falmouth on 25 April and was laid up in the River Fal on 4 May.
This will be sent via Royal Mail 1st class signed for and dispatched within two working days.