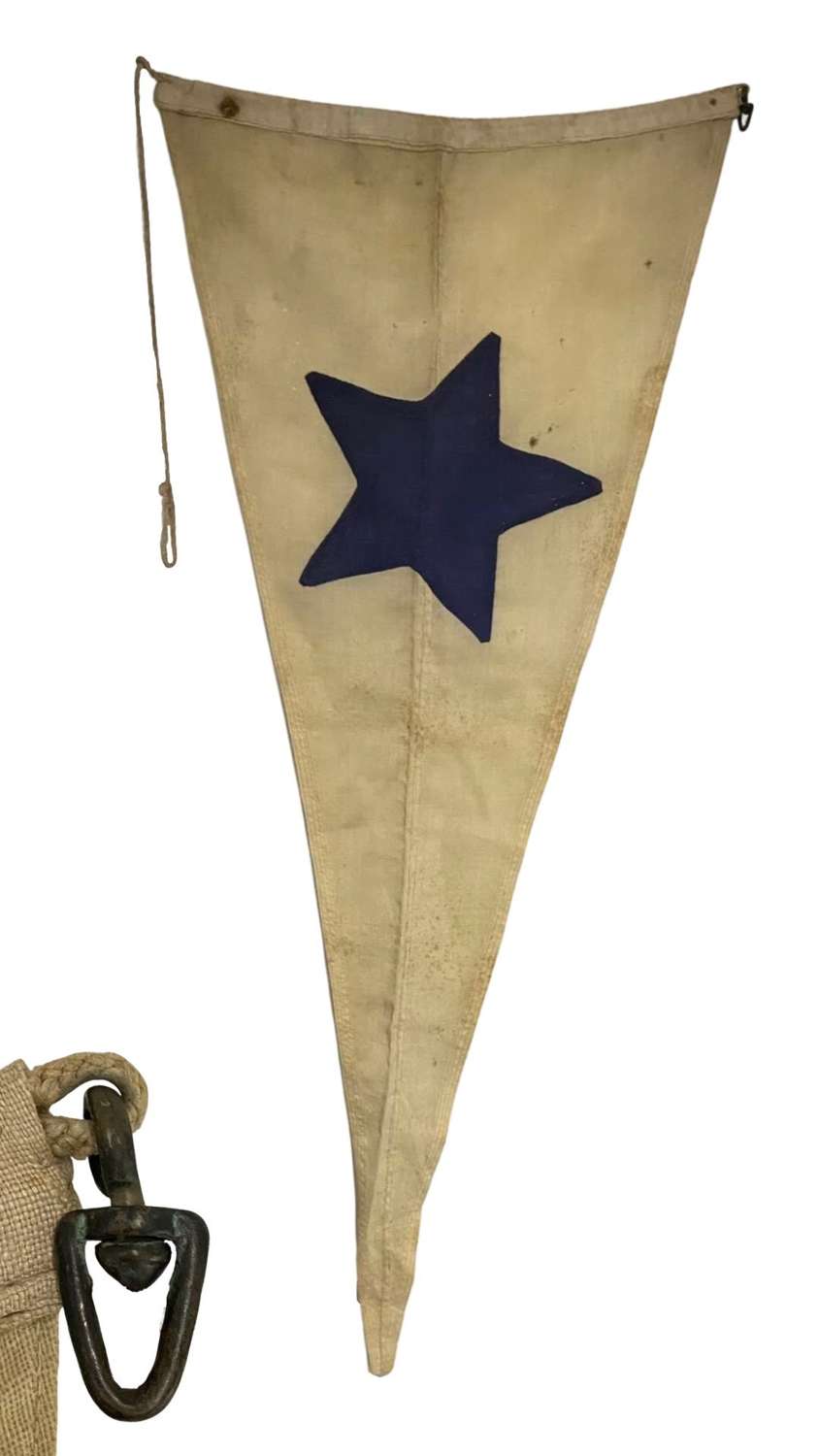 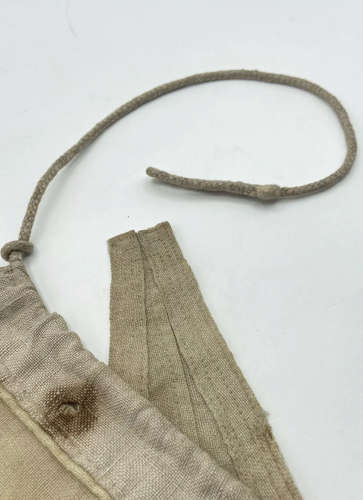 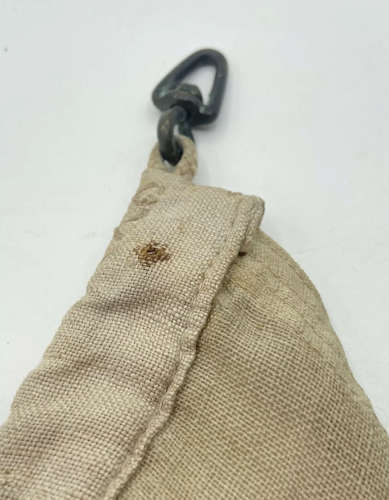 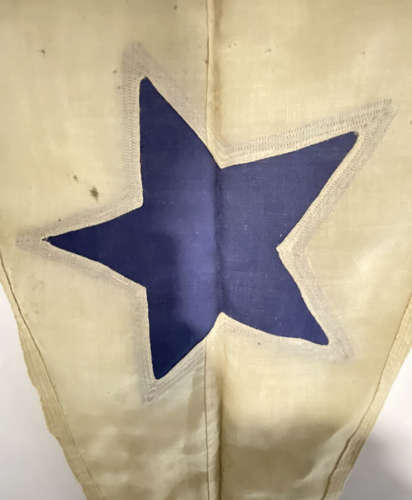 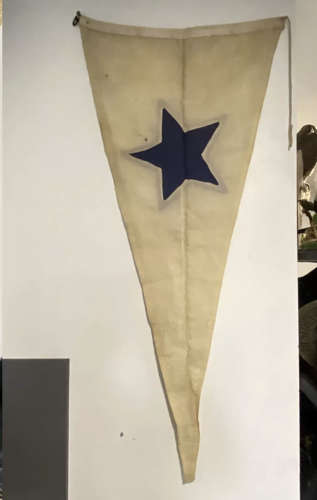 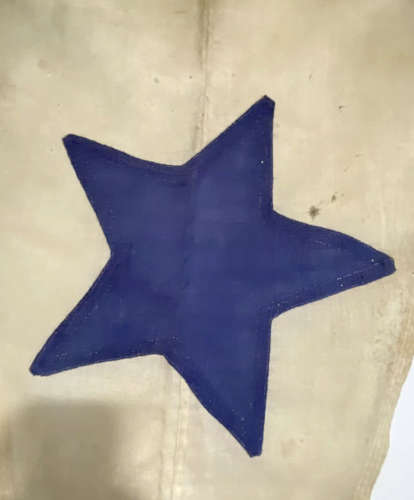 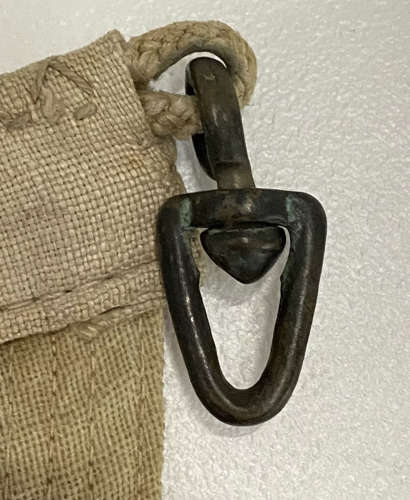 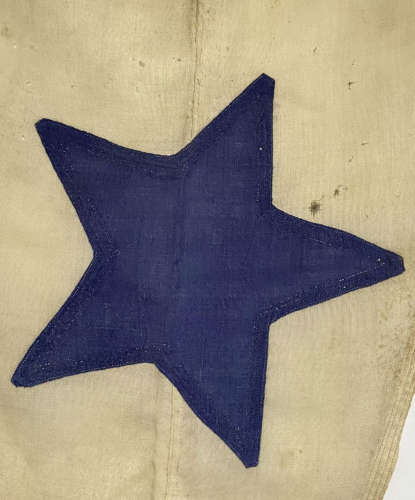 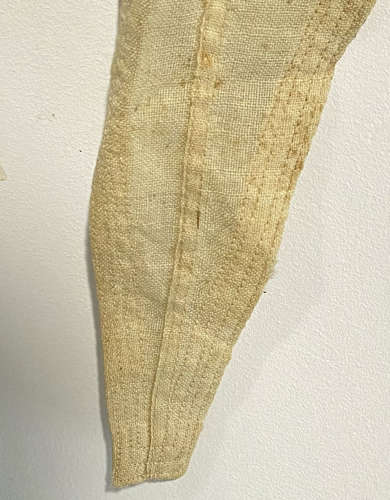 For sale is a very rare WW1 1910s British White Star Line/ Blue Star Line Ship Flag which has its original guide rope and Bronze Attachments. This flag measures 57cm height x length 121cm, 3.2cm width margin, additionally the guide rope is a further 39cm In length. Bronze attachment measures height 2cm x 4cm length. This flag is in good condition for its age, over 100 years old! But please see photographs for more details on condition. Dating back to the 1910s this would have seen action during ww1. A super rare and interesting piece to have!

History about the blue star line:

The Blue Star Line was a British passenger and cargo shipping company formed in 1911, being in operation until 1998.

Blue Star Line was formed as an initiative by the Vestey Brothers, a Liverpool-based butchers company, who had founded the Union Cold Storage Company to take advantage of refrigeration practices. They developed a large importation business, shipping frozen meat from South America to Britain, initially from Argentina on ships of the Royal Mail Steam Packet Company, and other shipping lines that called at South American ports. The high prices charged for transport by these companies led the Vestey brothers to start to operate their own ships. They chartered their first ships from 1904, and began to buy their own ships from 1909 onwards. The Blue Star Line was officially inaugurated on 28 July 1911, initially using second-hand ships. They ordered their first new ship in 1914, and by the outbreak of the First World War were operating twelve refrigerated cargo ships. These were initially prefixed 'Brod', e.g. Brodfield, Brodholme and Brodland. Ships of the company were identifiable by their red funnels with black tops and narrow white and black bands, with a white circle with blue five-pointed star on the red background. Their hull colours were either black or black with a white band, and red boot-topping.

The company supplied beef to allied forces in France during the war, and began an expansion programme after it was over. The name format was altered with the introduction of the "Star" suffix to ship names, starting with Royalstar launched in 1919, later renamed Royal Star. The company expanded its operations to include services to the Pacific coast of North America from 1920, and Australia and New Zealand from 1933. The Blue Star Line acquired Frederick Leyland and Company in 1935 and operated it as a subsidiary.

The new service was a challenge to both foreign competitors and the Royal Mail Steam Packet Company, whose Royal Mail Ships had been the premier UK carrier of mail, passengers and some cargoes between Britain, Brazil and the River Plate for 75 years. RMSP Chairman Lord Kylsant called the Blue Star ships "very keen competition" even though at the very same time his company introduced two larger and more luxurious new ocean liners for passenger and refrigerated cargo on the route, the 22,200 GRT Asturias (completed 1926) and Alcantara (completed 1927). In 1929 Blue Star added "Star" to the end of the name of each of its ships. This may have been partly to help distinguish Blue Star from Royal Mail Steam Packet Company, whose ships bore similar Spanish names. RMSP was an old company with a distinguished history, but had got into difficulties and collapsed amid financial scandal in 1932.

By 1939 Blue Star Line operated 39 ships, all of which gave Second World War service. In 1940 an Imperial Star-class ship being built by Burmeister & Wain in Denmark was captured in the German invasion of Denmark and completed as a Kriegsmarine submarine tender.

Because the Imperial Star-class were refrigerated and in merchant shipping terms relatively fast, several sailed in high-risk convoys to relieve the siege of Malta. Melbourne Star and Sydney Star took part in Operation Substance in July 1941, Imperial Star and Dunedin Star were in Operation Halberd the following month, and in August 1942 Melbourne Star and Brisbane Star served in Operation Pedestal. In February 1942 another ship of the same class, Empire Star, successfully evacuated an estimated 2,160 people from the fall of Singapore.

Because the Imperial Star-class were refrigerated and in merchant shipping terms relatively fast, several sailed in high-risk convoys to relieve the siege of Malta. Melbourne Star and Sydney Star took part in Operation Substance in July 1941, Imperial Star and Dunedin Star were in Operation Halberd the following month, and in August 1942 Melbourne Star and Brisbane Star served in Operation Pedestal. In February 1942 another ship of the same class, Empire Star, successfully evacuated an estimated 2,160 people from the fall of Singapore.

Blue Star suffered heavy losses. 29 ships were sunk: a total of 309,390 gross register tons (GRT). They included all of the Luxury Five liners, and two Empire ships that the company was managing for the Ministry of War Transport. Another 16 vessels, including three more Empire ships under Blue Star management, were seriously damaged. By the end of hostilities only 12 "Star" ships remained in the fleet. 646 Blue Star personnel, 272 passengers and 78 DEMS gunners were killed.

Blue Star Line bought Lamport and Holt Line in 1944 and Booth Steamship Company in 1946, and ships were often transferred back and forth between the subsidiary companies.