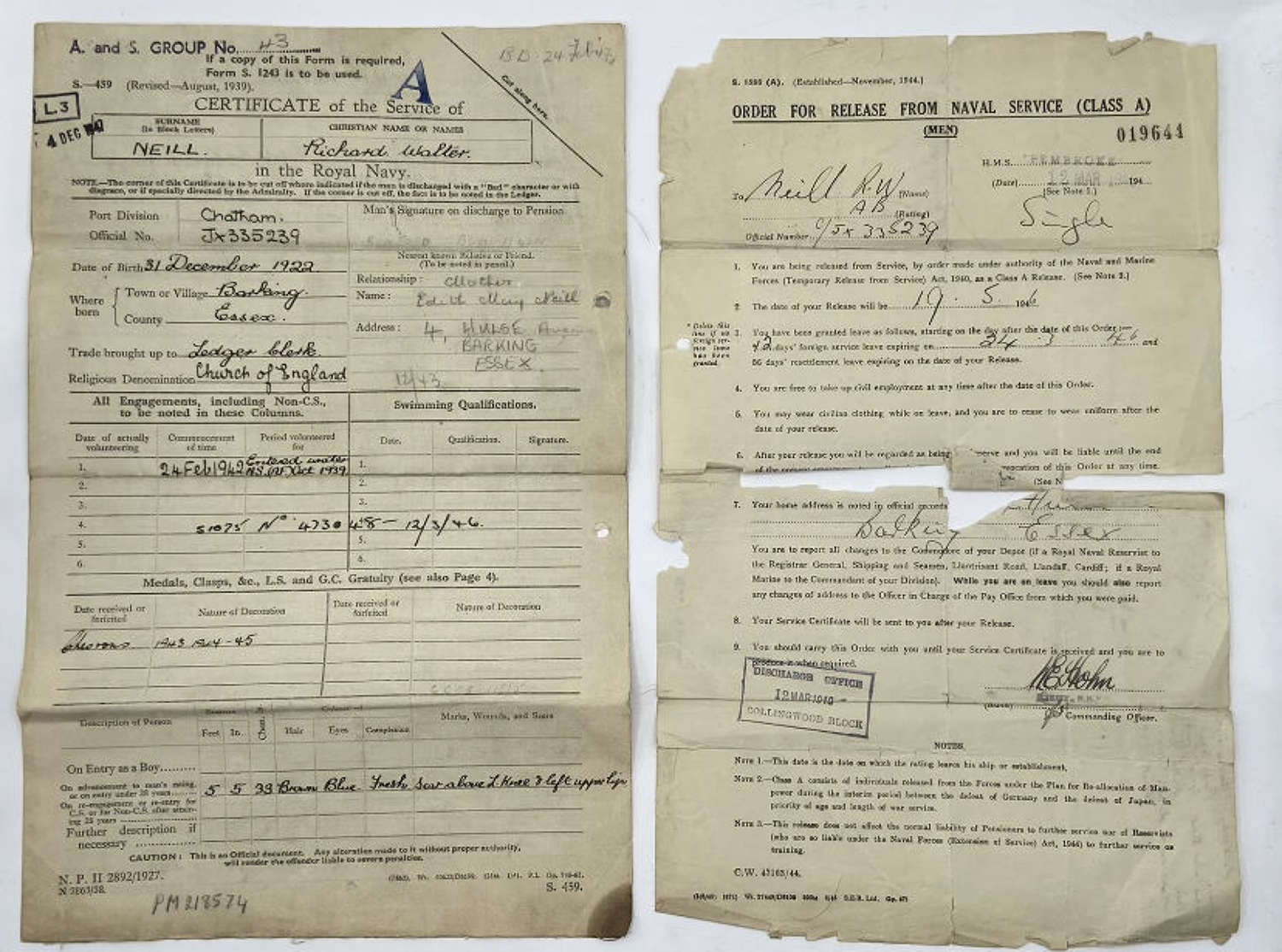 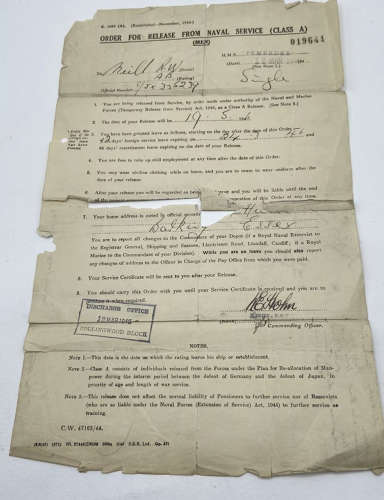 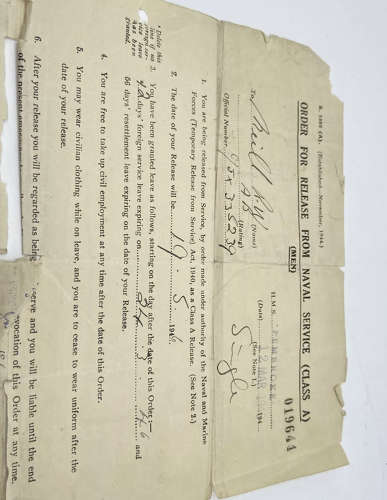 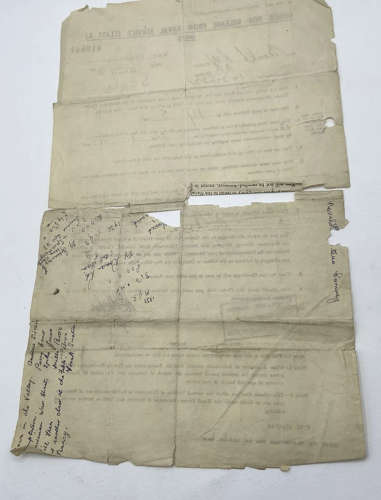 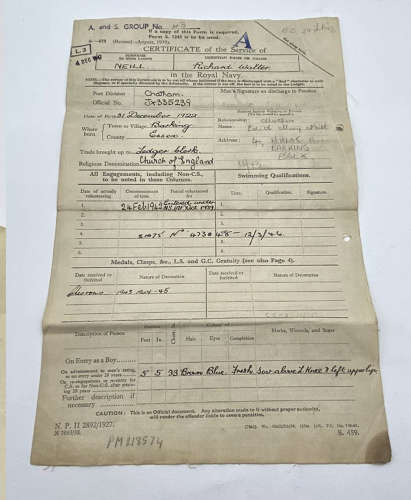 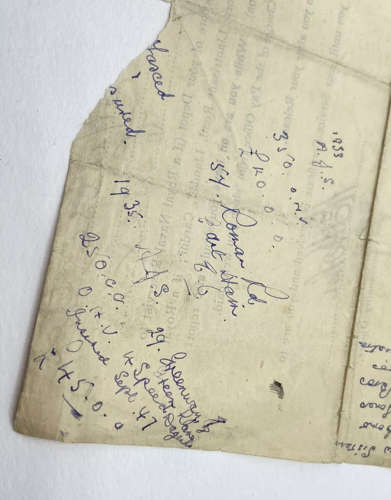 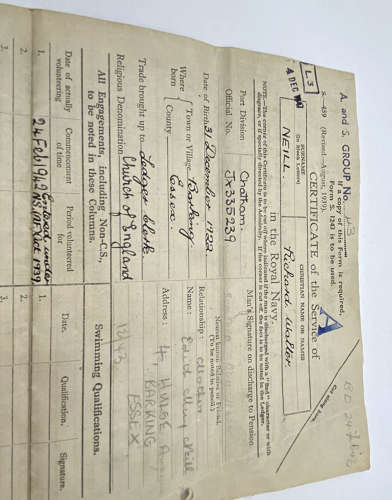 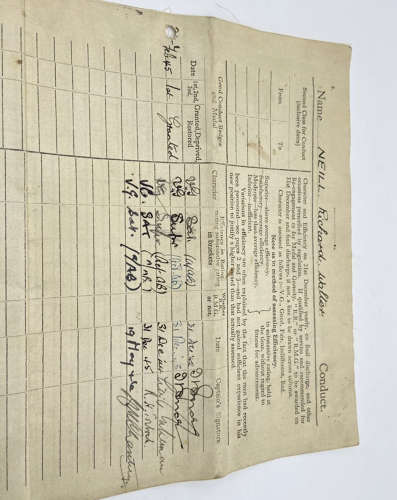 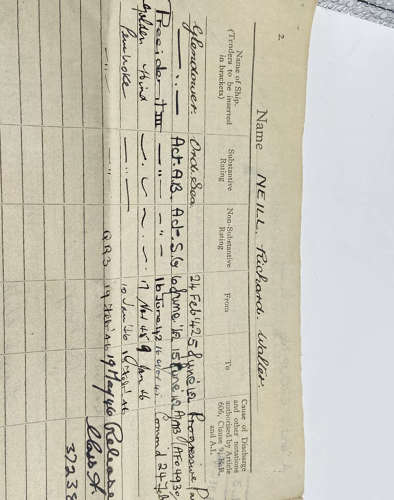 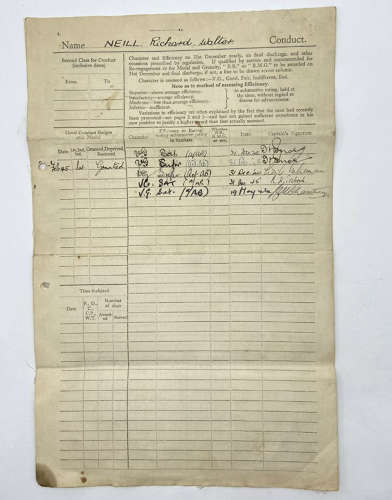 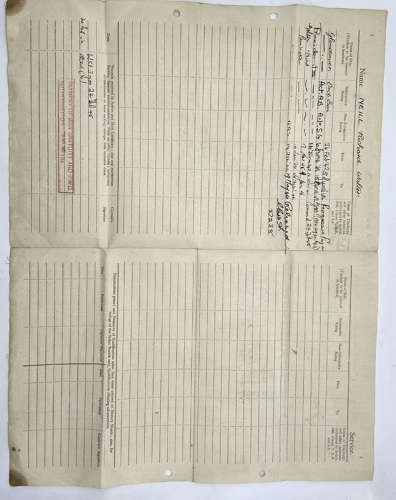 For sale is a WW2 British Royal Navy Certificate Of Service To JX335239 Richard Walter Neil who enlisted at port Chatham. Richard was born 31st December 1922 in Essex, born and was under the Church of England. In his teens he worked as a ledger clerk, and lived at 4 Hulse Avenue Barking Essex. Richard entered the war and service under the national search s act in 1939 and was discharged on the 12/03/1946.

Under the medals and clasps section on bud certificate of service he was awarded three chevrons for service in 1943,1944 and 1945.

Richard served on the following ships throughout the war with the Royal Navy:

•24th February 1942 to 5th June 1942 he served upon the HMS Glendower. During the Second World War the Royal Navy established a training camp on the Pen-y-chain peninsula near the Welsh town of Pwllheli and named it HMS GLENDOWER.

•6th June 1942 to 15th June 1942 he served upon the HMS Glendower. During the Second World War the Royal Navy established a training camp on the Pen-y-chain peninsula near the Welsh town of Pwllheli and named it HMS GLENDOWER.

•16th June 1942 till 16th November 1945 he service on HMS President III HMS. “President III” which was the ship-name given to the establishment located at Dedworth Manor and which was administered under strict naval discipline. This establishment was responsible for the pay, accounts and administration of the D.E.M.S. (Defensively Equipped Merchant Ships) personnel, worldwide, and was directly responsible to D.N.A. (The Director of Navy Accounts) at Admiralty. Part of the Wren personnel lived in Dedworth Open Space, the remainder were at Hodgson House in Eton. The staff, under the command of a regular naval officer, Paymaster Captain Kennedy, RN., consisted of regular and reserve naval officers and ratings as well as Wrens, the male ratings were mainly those returning from sea service, including survivors. During the latter part of 1945, HMS. “President III” was moved to Chelsea Court in London. Throughout the period all the premises were regularly inspected by Captain Kennedy.

• 17th November 1945 to 9th January 1946, he served with HMS Golden Hind. In November 1944 the Australian government began transferring military bases and facilities to the Admiralty in preparation for the arrival in Australian waters of the newly formed British Pacific Fleet. On November 20th 1944 HMS GOLDEN HIND commissioned as an RN Accounting Base and headquarters at the former American army camp at Hargrave Park, Liverpool, Sydney, New South Wales. The Headquarters camp comprised of wooden huts, with additional accommodation being completed in the early part of 1945. A Barracks & Drafting Pool was established on the opposite side of the railway line, at the nearby Warwick Farm racecourse; this was a huge tented camp which occupied the centre of the racecourse. Here the naval personnel arriving from the UK were accommodated while awaiting passage to join the BPF at Manus or elsewhere.HMS GOLDEN HIND was also the headquarters of the Flag Officer Naval Air Stations (Australia) (F.O.N.A.S. Australia), Rear-Admiral R. H. Portal, DSC, who had responsibility for all Fillet Arm related matters including the drafting of large numbers f Fleet Air Arm personnel that were to pass through the Barracks on route to Air Stations in Australia and for the fleet carriers and support vessels.

The accompanying piece of paperwork is in order for release from naval service class a dated 1946 from HMS Pembroke.