A large interesting ww2 medal and paperwork grouping to 197271 Captain A R Rees Royal Sussex Light Infantry, who also served in Kings Shropshire Light Infantry. All the paperwork is from 1939 to 1946. This medal group includes full sized Italy star, Africa star, 1939-45 star, war medal, defence medal and. Territorial Army medal named to Capt A R Rees RSLI, the territorial Army medal also comes with two certificates on separate occasions. Also in this lot comes his miniature medals comprising of Africa star with 8th army clasp, Italy star, 1939-45 star, defence medal, territorial Army medal and war medal with oak leaves mounted and boxed by Spink & Sons Ltd, kings street London. He served in Italy, Egypt and Africa- letters dating and talking about taking each of the cities went through and thought for. Also mention in the supplementary London gazette three times once on 28th September 1945, 1947 being awarded a territorial medal and 1st March 1949 for his honour my rank of major. Awarded the territorial army medal twice once in 1947 and once in 1951, only one medal and one box is present, but two certificates and ribbons are present. Also present a telegram dated 2.15.1939 “SFW SA OHMS .27 MR REES 26 CORRYMORE MANSIONS SKELTY ROAD SWANSEA REGRET 197271 2 / _LT REES AR SERIOUSLY ILL IN THIS HOSPITAL FROMBRONCHIAL PNEUMONIA LETTER FOLLOWS OC MILITARY HOSPITAL SHAFTESBURY”.

A letter dated 25.2.1942, seven pages long talks about a training exercise going gravely wrong. Rees talks about his near death experience to his farther. He talks about the realities and hardships of training of “being up to your necks in water, crawling over barbed wire, jumping from high heights, running nearly all the time will full equipment, live rounds being fired with yards of us” which non of this compares to this experience. On the 17th February 1942 Rees describes his account “of how he almost lost his life” during a training exercise called “Opposed landing” gone horribly wrong, which happened in a bay near swanage. The idea of the training excercise would be that the men would be tied out to sea and then would have to make a landing to a bay whilst under live fire near and around the boat. The exercise was to be run by the coastguards, upon the start of the exercise, once the coastguards started firing Rees noticed water coming into the boat, what made matters worse was the coastguards were firing live ammunition and they did not know that the boat was taking on water, Rees and the 12 men aboard didn’t panic and reached 30 yards away from the bay when the ship overturned and sunk, Rees and his men fell into the deep water (20 foot) with all of their heavey equipment and kit still attached to them. Rees was pulled under several times because of the weight, in which Rees describes this to be the “worst 5 minuets of his life” and that he was very fortunate that he did not drown. One of the instructors on the shore was a strong swimmer and swam out to help Rees and save his life. Unfortunately the young sergeant lost his life during this exercise. One light machinegun and four rifles one of which was his, was also lost to the sea. The following day he had to attend two enquiries one of how the sergeant lost his life and one formalities of loosing the weapons. In his enquiry he said that the boat was unseaworthy and overloaded which would have contributed to the sinking of the small boat.

One of the most interesting pieces of paperwork in the grouping is a 21 page diary of “Tunisia Campaign”, which is a very interesting read. In brief; May 4th to 15th May, heavy fighting on the front later that night a German officer and two NCO’s wave the white flag and surrendered. They surrender to the Brits because they were worried about what the French would do to them. Later on in the month he held a burial service for the men he lost. He also talked about passing tons of enemy equipment and a shell coming out of no where that it was “jerries firing his last shell”, thankfully only killing one of his men. A day before armistice day, shellfire was put into the enemy position and his battalion was ordered in to “mop up”, but by the time they got there the Germans were waving white flags and surrendered. That night him and his battalion maintained there position with the German pows, where they were heavily mortared loosing only one. April; he talks about going into no mans land and walking into a German patrol, and being machine gunned down by the jerries, not being able to move for hours on end. Furthermore talks about fighting with the Indians and them being grand fighters. Furthermore talks about how his battalion captured General von Arnim and his staff taking them as prisoner of war, and of how proud he was of his battalion. Also most interestingly he talks about his duties in a Tunisian POW camp, and what he saw one day in April, the following is one of the entries “ A Jerry plane came over our camp very low and carried out some machine gunning. He caused no casualties, but the same plane machine gunned a column of men on the road. He thought they were french, but actually they were their german prisoners of war, so he shot up his own men”. This page in particular can be seen in the photos.

This really is a brilliant lot with plenty of research potential and a detailed captains first hand account/ diary of the Tunisia campaign. First hand Accounts of how german and Italian pows were treated, Many letters of his account in Egypt and Italy also. So many intresting  letters And bits of paperwork to read. 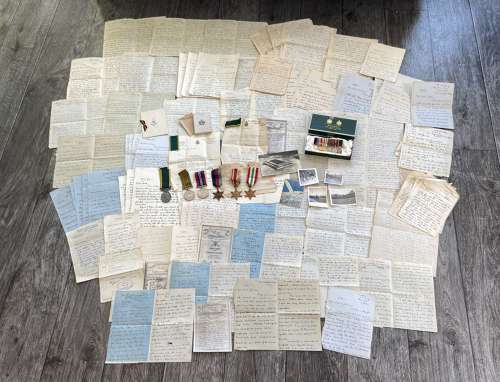 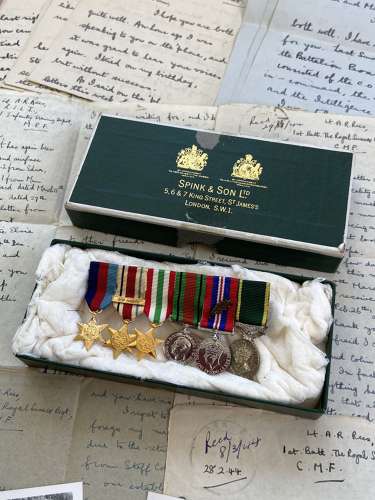 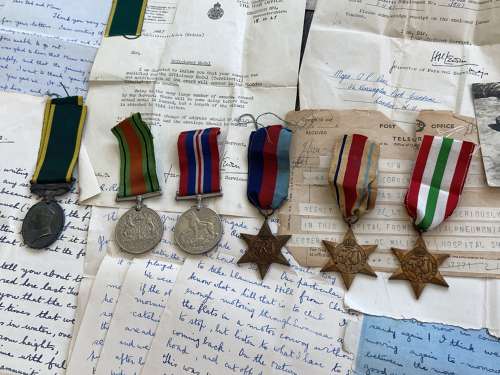 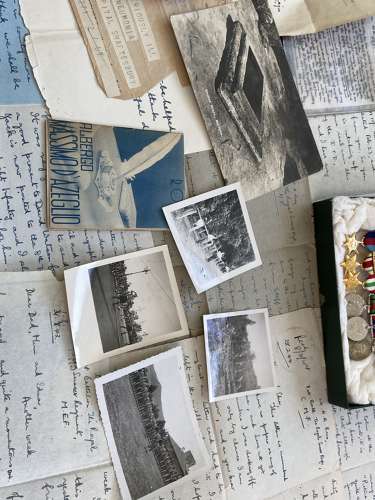 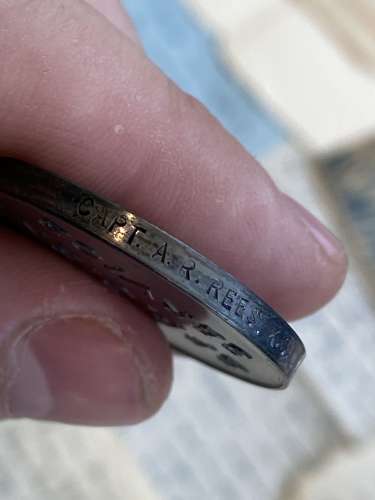 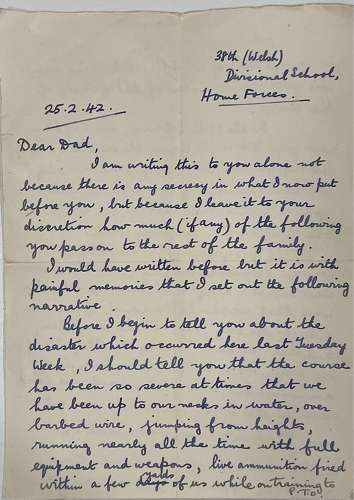 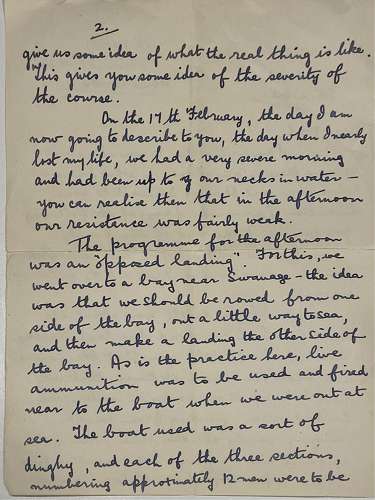 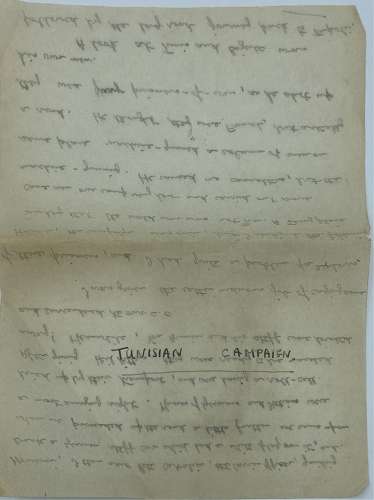 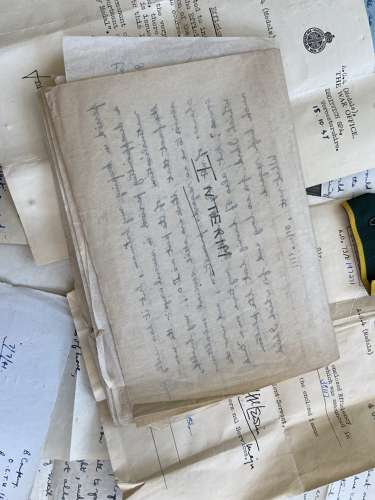 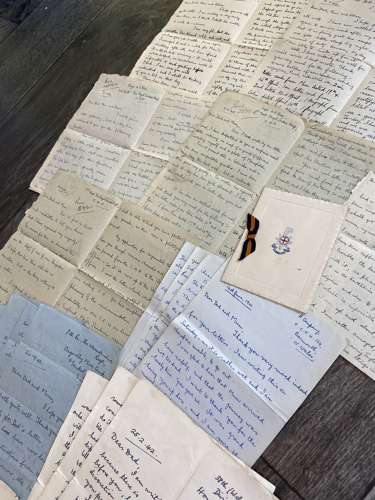 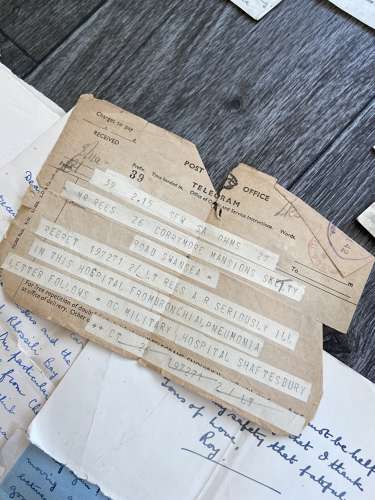 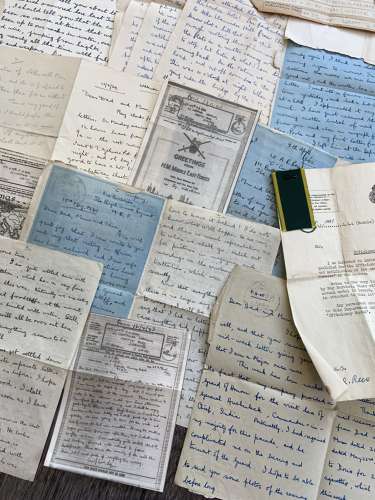